Having trained at The Unseen, a part-time drama school in London, Elisha Applebaum had previously made a few minor appearances in TV shows and short films. That all changed when the 25-year-old landed her breakout performance as one of the leading roles, Musa, in Netflix’s new coming-of-age series ‘Fate: The Winx Saga’.

The show, which was trending at number 1 upon its release on Netlflix, is a live action adaption of the 2004 animated series ‘Winx Club’. This new take on the show follows a group of teenage girls attending Alfea, a magical boarding school in the Otherworld. Across the six episodes, the characters must learn how to master their dangerous magical powers while navigating love, rivalries and the monsters that threaten their very existence.

With most of the fairies holding powers related to the five elements, Musa’s differ from her animated counterpart. As a fairy of the mind – or an empath – she has access to other people’s emotions at any moment in time. Musa’s powers are almost always active, so she tries to block out all the external noise and shut herself off from the world by putting on her headphones and listening to music.

Despite its initial success, the show received widespread criticism for whitewashing the main characters, with Elisha acknowledging the backlash and stating that she hopes her portrayal of Musa is to people’s liking. Co-star Precious Mustapha, who plays water fairy Aisha, has also praised the show for having a diverse cast, but has admitted there is still more work to be done in the industry.

Notion caught up with Elisha to chat about ‘Fate: The Winx Saga’, some of her favourite shooting locations, what she hopes viewers can learn from the show and launching her own female empowerment podcast. 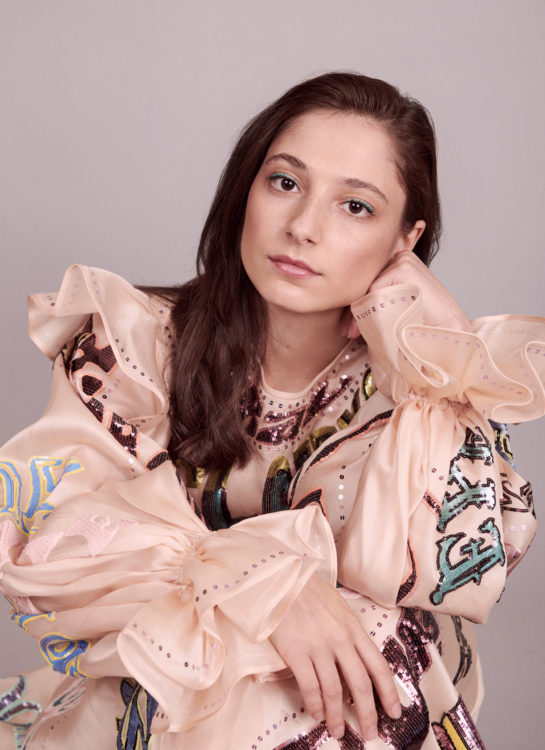 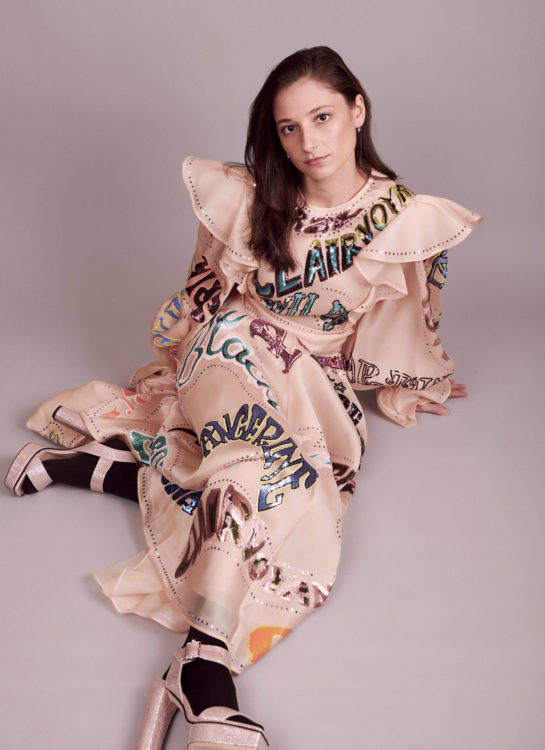 First of all, I just want to say congratulations on the show. What has the initial reaction been like?

It’s been wild. I mean, everyone’s been loving it; they’ve been so excited by it, I think. Because it already had a big fan base and we had a lot to prove, but it’s been positive. Everyone’s just sent us a lot of love. So, it’s been really good. It’s really, really amazing.

Awesome. I’m sure the time that’s passed from getting the role, to filming, to now has been quite a long process. How does it all feel that it’s finally out there?

I understand that this is one of your first major roles and that some of the cast were in fairly similar positions to you in that sense. What was the dynamic like whilst filming?

It was amazing. I think we all came in very nervous and excited. So, we kind of just had each other’s back throughout and you know, if anyone was feeling stressed, or feeling a bit nervous or anything, we’d just give each other a hand. It was really nice.

Was there anyone who was a bit more experienced and led the way amongst the cast?

Abi was our leader. After doing ‘Chilling Adventures [of Sabrina]’, she definitely was like, ‘Okay, so when this comes out, you know, this is gonna happen, and you’re gonna need this’. So yeah, it was really helpful having Abby on the team, not only because she’s amazing.

Did you know any of the cast before shooting? Had you done any projects or met anyone before everything started?

I knew Precious from auditioning. We had a couple of chemistry reads together and it was really cool. But we kept in touch throughout the whole process. So then, once we both found out, we got it, we went for a couple of drinks and dinner and had a chat about it. 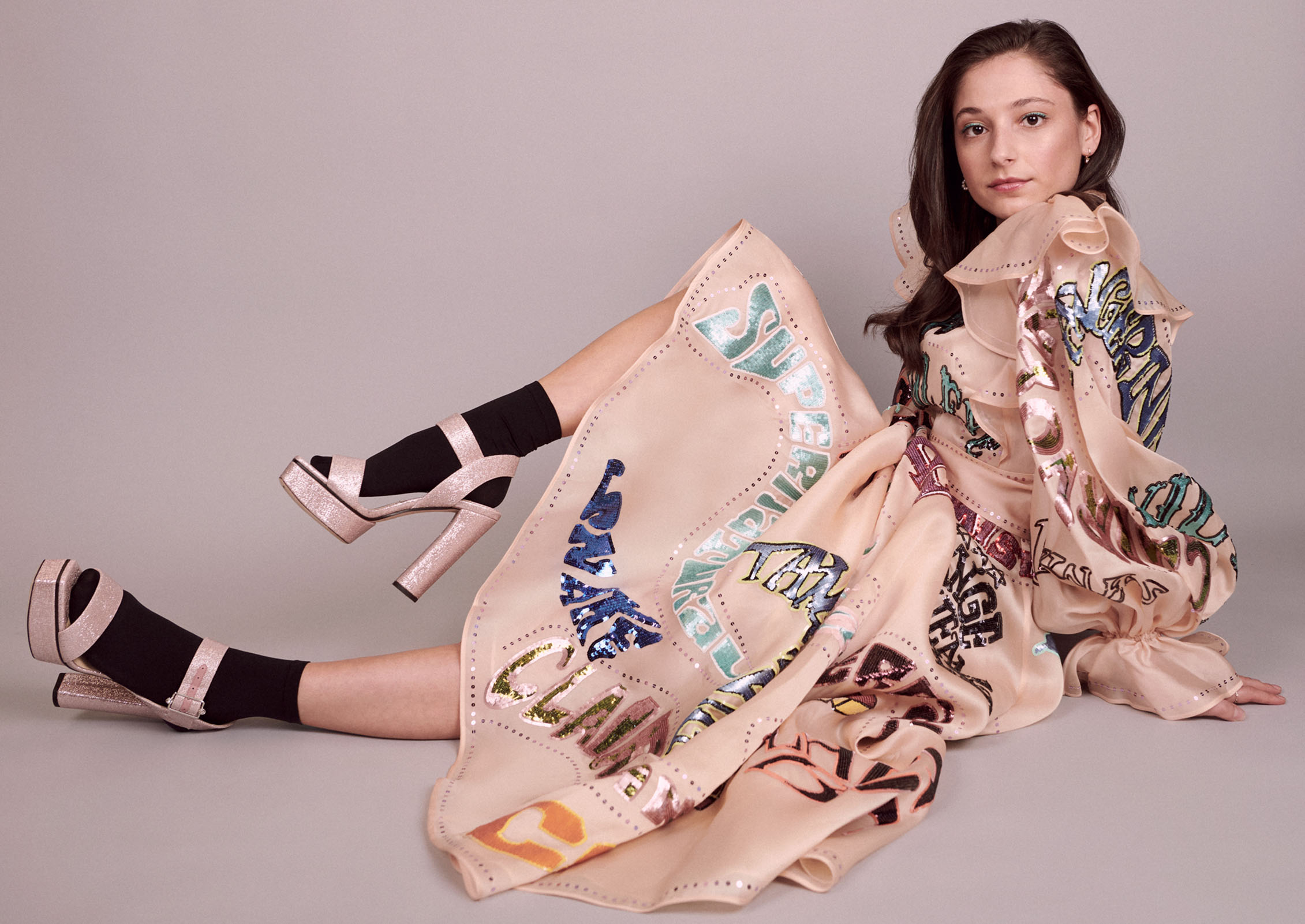 It’s great to see some pretty spectacular locations in the show. What was it like filming out in Ireland?

It was just as magical as it looks on the screen. There was a scene where there’s a massive waterfall, and it looks like CGI, but it’s for reals and it was just amazing. And not only that, the onscreen moments, but the pubs are fantastic.

So, was that waterfall scene a particularly favourite day of shooting or were there any others that really stood out?

That one stood out because we were attacked by monsters throughout the whole day. We just took cover. There were great moments like the scene with us in the tunnel. Musa, Stella, Terra and Bloom were in this tunnel and it was jokes. We just had a really good time and we were just taking the mick out of each other as we do and it was just a lovely day.

I think I saw on a Netflix promo vid that you said that this was one of your biggest blooper days when you were all stuck in the tunnel.

There were lots of bloopers, yeah. I think we’d just been on set pretty much all of that day. So, we were just like losing it a little bit a being a bit hysterical.

With your character, Musa, her powers are completely new and original compared to her animated counterpart. Were you able to experience a bit more freedom when exploring your character compared to the rest of the cast?

I don’t know if it’s for the rest of the cast, but I felt like I didn’t really go off of the animation. It wasn’t really helpful to me. I knew that she was into her music and music in animation is quite quirky, which they took into the newer one. But with regards to the magic, it’s so different, that I had to make it up.

Musa develops quite a lot through the series and goes through a lot of changes. Why do you think she’s able to let her guard down a bit more and become more comfortable in her skin as the story develop?

I think it’s because she has opened herself up to this guy. I think she has never felt this feeling before. So, I mean, I think she’s still learning. I think its emotions that she doesn’t know how to control still, and so I think the reason she lets down her guard is because it’s all new, and she’s kind of safe from home, which I think is the real monster that she she’s trying to fight away from. So, these girls have allowed her to open up which is lovely.

You also have a bit of a development with your outfits. They start quite rugged and become a bit more relaxed towards the ends. Which looks did you prefer? As Musa got more comfortable, were they the best looks?

Yeah. I love a bit of knitwear. And the trainers. I mean, at the beginning, she was like she was in the army where she had big boots on and a bomber jacket. 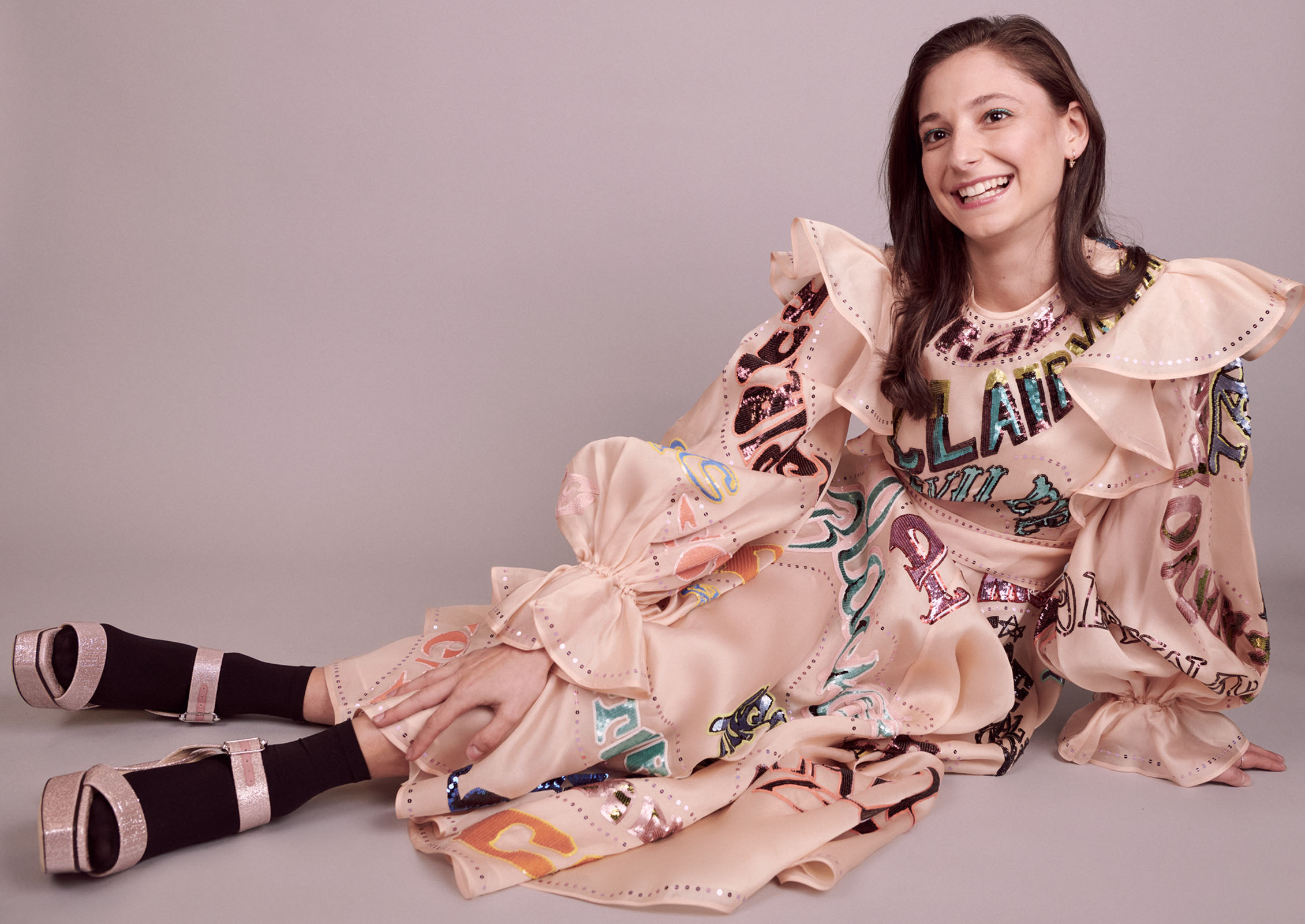 As we’ve already mentioned, Musa wears her headphones a lot in the show as a way to escape from all the noise. Have you been listening to anyone particular to help you get by over the last few months?

Yeah. I love that podcast.

I feel like it’s been a really big year for podcasts. It seems like everyone has really got into them.

Yeah, definitely. I mean, I’ve started my own, so I think it’s just the way to go at the moment.

I guess that leads nicely into my next question. I was going to ask you about the podcast. For those who don’t know or haven’t heard that you have your own podcast now, can you tell us what it’s about and what you’re hoping to do with the platform?

It’s just to inspire women who are struggling with trying to get work and who are struggling with self-confidence. But we keep it within the entertainment industry, and we’ve partnered up with a young charity called The Girls Network, where they mentor young women to get the jobs that they want to get in the future. So, we get these young mentors to come on and other guests too who are in the entertainment industry.

Awesome. Just going back to the show, I wanted to ask you about, a particular scene that you have with Elliot, or Tara, and when you share a particular secret. I’ll try not to give too much away.

The one about the mother?

The scene feels very real and very raw with emotions. So, what was it like holding on to those secrets during the show, and what do you hope viewers take away from a scene like that?

Um, it was difficult. I actually didn’t know what the reason for Musa’s standoffish, sort of horrible vibes through the beginning of the series were for because we didn’t get the script for that episode until probably filming Episode Four. So, I knew that there was obviously something going on. But I had to wait until that happened. I think what people should take away from it is that it’s so much better to talk about things. It might feel like a burden, or it’s like your own secret that you don’t want to bother people with. But it’s so much easier to talk about it because once it’s come out, and as horrible as this secret may seem, once you’ve laid it out, it’s so much better. 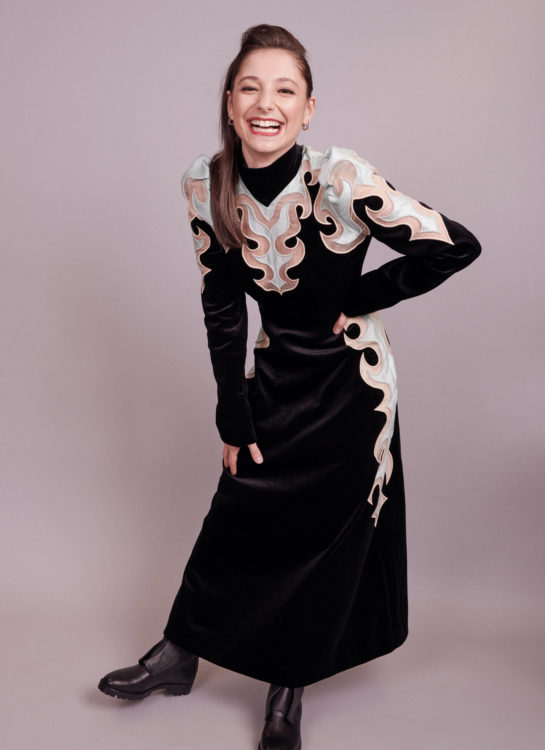 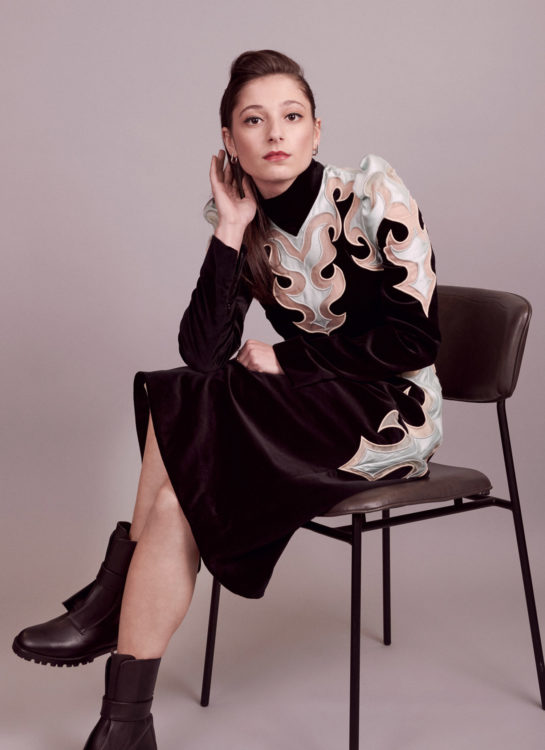 I think that the show is full of that. Even though it’s set in a fantasy world, with lots of magical elements, it’s still heavily focused on those real relationships. I guess that’s why it’s appealing to a lot of viewers, would you say?

Yeah, I mean, my mum and grandma, were very honest. And we’re like, “I’ll be honest with you, I know you’re in it, but if the story wasn’t the way it was, then I probably wouldn’t have continued to watch it.” It’s really caught a massive audience, different types of people so it was made for that, I think.

I want Musa to just start loving herself a bit more and fight for her own battles because she struggles with fighting throughout this whole series until maybe the end. So, it would be cool if she started doing some really cool action things, but it would be nice if she came into her own and started loving herself as well as loving everybody else.

Would you be keen for some action scenes? Get some training?

There’s obviously a lot of scenes where we see mostly the boys outside training. Were you able to get involved on any of these days?

Just casting spells… I mean, I don’t know how I’m gonna put it, but the boys are there for the muscle, women are there just to be like, we could do it with a finger. We don’t have to move a muscle [laughs].