Rainbow Riots is an award-winning non-profit organisation that uses creative collaborations with queer artists to create change, often in countries where it is illegal or controversial to be LGBTQ. Founded by Petter Wallenberg, the Swedish musician and activist recognised an international capacity for individuals to be unified through a musical community. Tirelessly working to use the power of music to mobilise positive action, Rainbow Riots opened East Africa’s first LGBTQ community centre in 2019: a milestone for international LGBTQ rights.

Currently, in over 70 countries across the world it remains illegal to be LGBTQ. In some cases, these identities are punishable by death. LGBTQ people are forced to stay hidden in order to survive. On June 25, a terrorist attack targeting Oslo Pride killed two people and injured many more, demonstrating the very real danger still faced by people living as their true selves. Wallenberg describes how this event reiterated the need for groups such as Rainbow Riots, creating a melting pot that crosses borders and genres, including professional artists and marginalised voices from global rainbow communities.

New track “We Don’t Care” was released exactly a month after the Oslo attack. Written and produced by Wallenberg whilst bringing together queer voices from across Asia, Africa, Europe and North America, the mix of languages and styles is a joyous blend. Part of the track are Sweden’s first LGBT gospel choir Rainbow Gospe; rapper Jwl B; a Jamaican reggae singer who risks his life fighting homophobia in Jamaica; Shivanah, an LGBT refugee in Kenya; and India’s first queer rapper, drag artist Tropical Marca.

Speaking on the track, Petter describes: “The new song ‘We Don’t Care’ is our way, as queer artists, to fight hatred with creativity. I made it with queer voices from four continents, including countries where it is illegal to be LGBT. We want to show the world that every human has the right to be and love whoever they want.” Notion caught up with Petter to find out more about the organisation’s work, what Pride means to him, and how Rainbow Riots is saving lives. 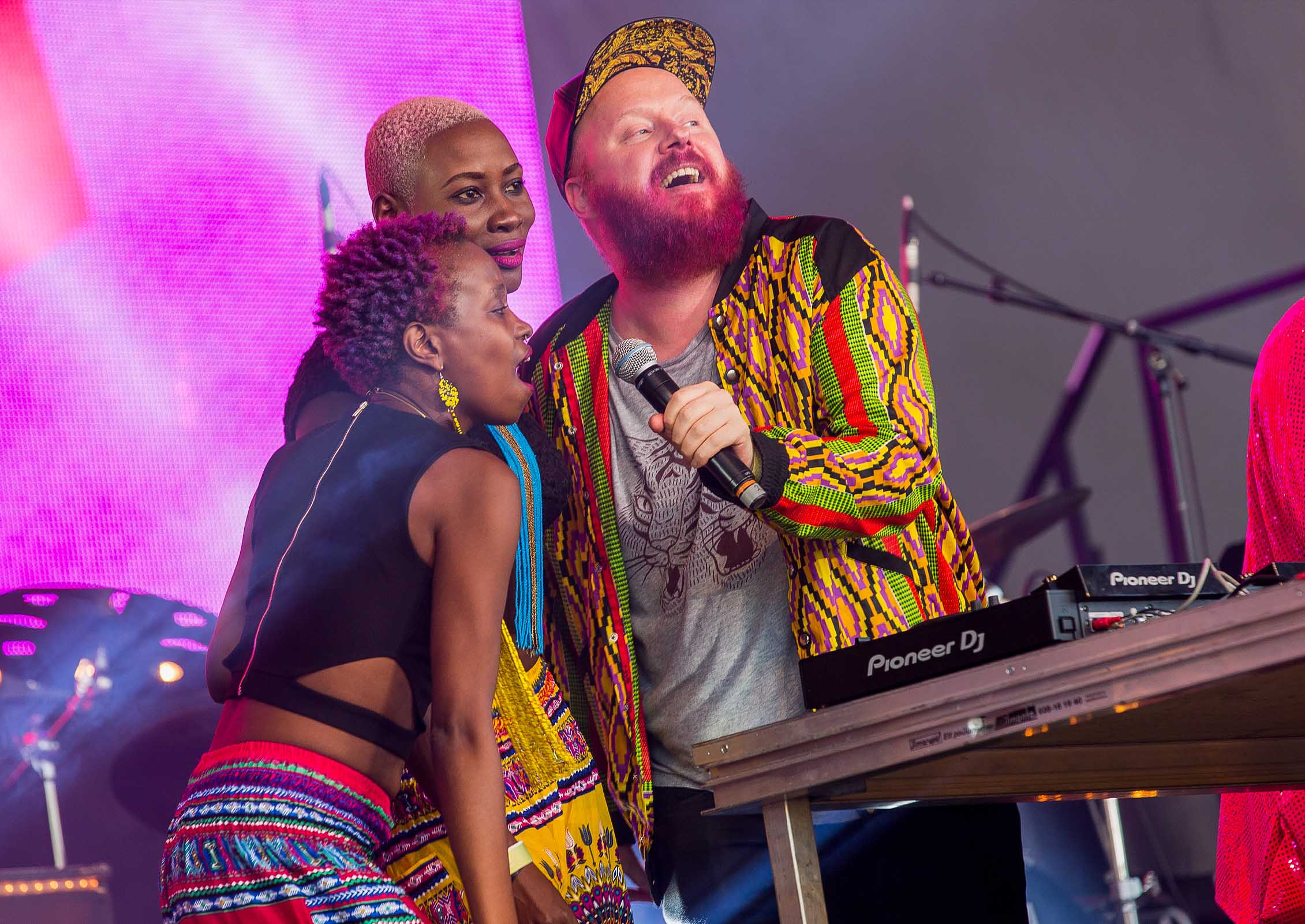 For anyone not familiar with Rainbow Riots, who are you and what do you stand for?

Rainbow Riots is a non-profit organisation that creates arts and culture projects to advocate for human rights for LGBTQ people around the world. Our projects often take place in countries where it is illegal or dangerous to be LGBTQ. As an openly gay artist and musician, and the founding director of Rainbow Riots, this approach came naturally to me. I want to use my creativity to fight hatred.

When did you found the organisation and why?

I founded Rainbow Riots officially in 2016 when I was in Uganda working on music with Ugandan queer singers. I was there making an album with queer voices from some of the world’s most hostile countries to LGBT people. In In Uganda it’s illegal to be LGBT and queer people live in fear of being arrested, getting beaten up or killed.

During the making of the music, me and my Ugandan friends were celebrating Uganda Pride in a venue with a few hundred LGBT people. Suddenly the police stormed in with machine guns, and ordered us down on the floor and held us all hostage for two hours. We couldn’t help but thinking – are we gonna die? Everyone was silent and all you could hear was someone crying. Later we found out someone had jumped three stories to escape, and broke their spine. I’ll never forget that night. That’s when this became something much bigger than music, and I founded the organisation Rainbow Riots. 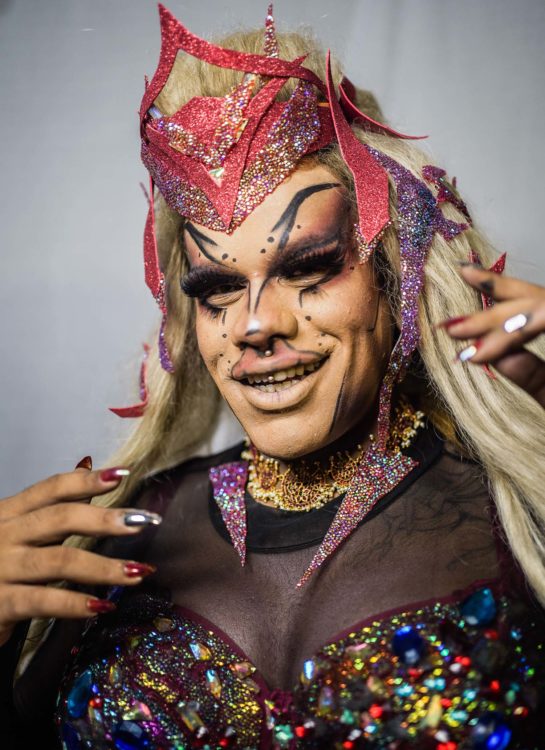 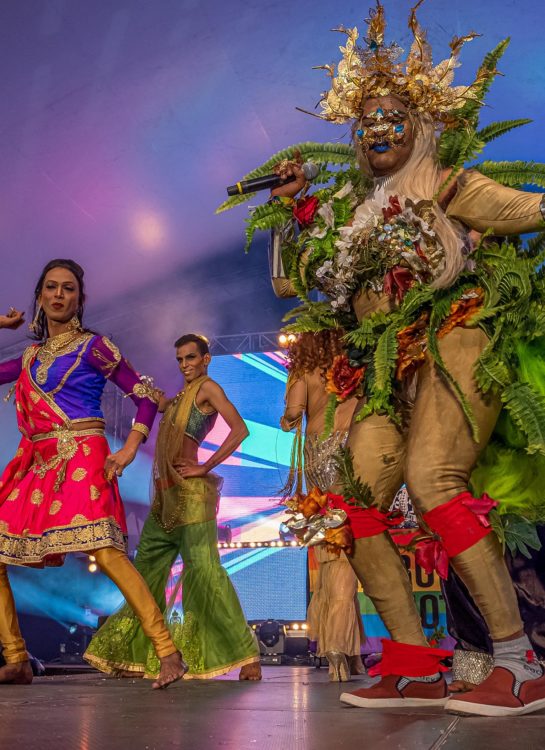 How has the Rainbow Riots grown and evolved since then?

Over the years Rainbow Riots has grown into a multinational organisation and creative collective behind a string of international projects, several of which have made serious waves around the world. We work with both creating music, films, radio, advocacy campaigns, capacity building for marginalised LGBT communities as well as running an independent record label.

Can you tell us about some of the artists involved?

The new song ‘We Don’t Care’ is a new song I made it with queer voices from four continents, including countries where it is illegal to be LGBT. For five years I travelled around the world to record the track, in five different countries. On it you can hear Sweden’s first LGBT gospel choir Rainbow Gospel, rapper Jwl B from the American queer rap group Yo Majesty and Mista Majah P, a Jamaican reggae singer who risks his life fighting homophobia in Jamaica. Also featured are Shivanah, an human traffiicking survivor and LGBT artist in Kenya, the drag artist Tropical Marca, India’s first queer rapper alongside the queer Ugandan artist collective Rainbow Riots Uganda.

The music video, also directed by me, features a Bollywood-style dance scene in India, a group dance performance in the rainforests of Uganda, a gospel singing Pride parade in front of Stockholm city hall in Sweden, rapping on the urban streets of Florida and more. It celebrates the beautiful diversity of the global rainbow community while highlighting that hate crimes against LGBT people are on the rise. The Jamaican performance takes places in front of a list of the 70+ countries in the world that punish same sex relations – some by death.

What’s the best piece of feedback you’ve received about your work?

That it saves lives. That’s what some of the people involved have said, particularly in places where the situation for LGBT people is desperate. I have been contacted by LGBT people from all over the world, from South America to Asia and Russia, who say they’ve been inspired and moved by it. Last week a closeted gay guy in India contacted me and said the music videos made him feel less alone, and recently a Swedish teenage lesbian told me she has one of our songs as her alarm clock on her mobile phone every day. I’m overjoyed that it brings hope and strength to people.

Can you tell us about the projects Rainbow Riots have put out so far?

In 2019 we opened Uganda’s first LGBT community centre. It was a safe space where the Ugandan LGBT community could escape violence and find support and creative activities. The same year we released the music album ’Rainbow Riots India’ which I composed and produced in collaboration with India’s first openly LGBT singers and dancers. The lead single was dubbed “India’s first Pride anthem” by Indian media, which was amazing. The album was created in collaboration with the Indian LGBT+-movement that achieved the historic victory of legalizing same sex relations in India. That was such an amazing journey. When I first went to India as a gay man I was a criminal – and when the album was finished, suddenly all Indians were free to love, which was possibly the biggest victories for human rights in our time.

What project have you been most proud of?

How are you feeling about the release of “We Don’t Care”?

Very excited. After 5 years in the making, travelling around the world recording it and filming the video, it’s finally out! Now it’s the audience’s turn to travel from country to country, across different cultures, in one and the same song!

What’s the message of the song?

The message is one of defiance, strength and hope. We want to show the world that every human has the right to be and love whoever they want. It’s also about experimenting with broadening the boundaries of musical styles. The track features dancehall, rap and gospel – music styles which can often be considered heteronormative, and not very queer friendly. I wanted to explore how it could turn out if I used those same music styles to make one big rainbow anthem! 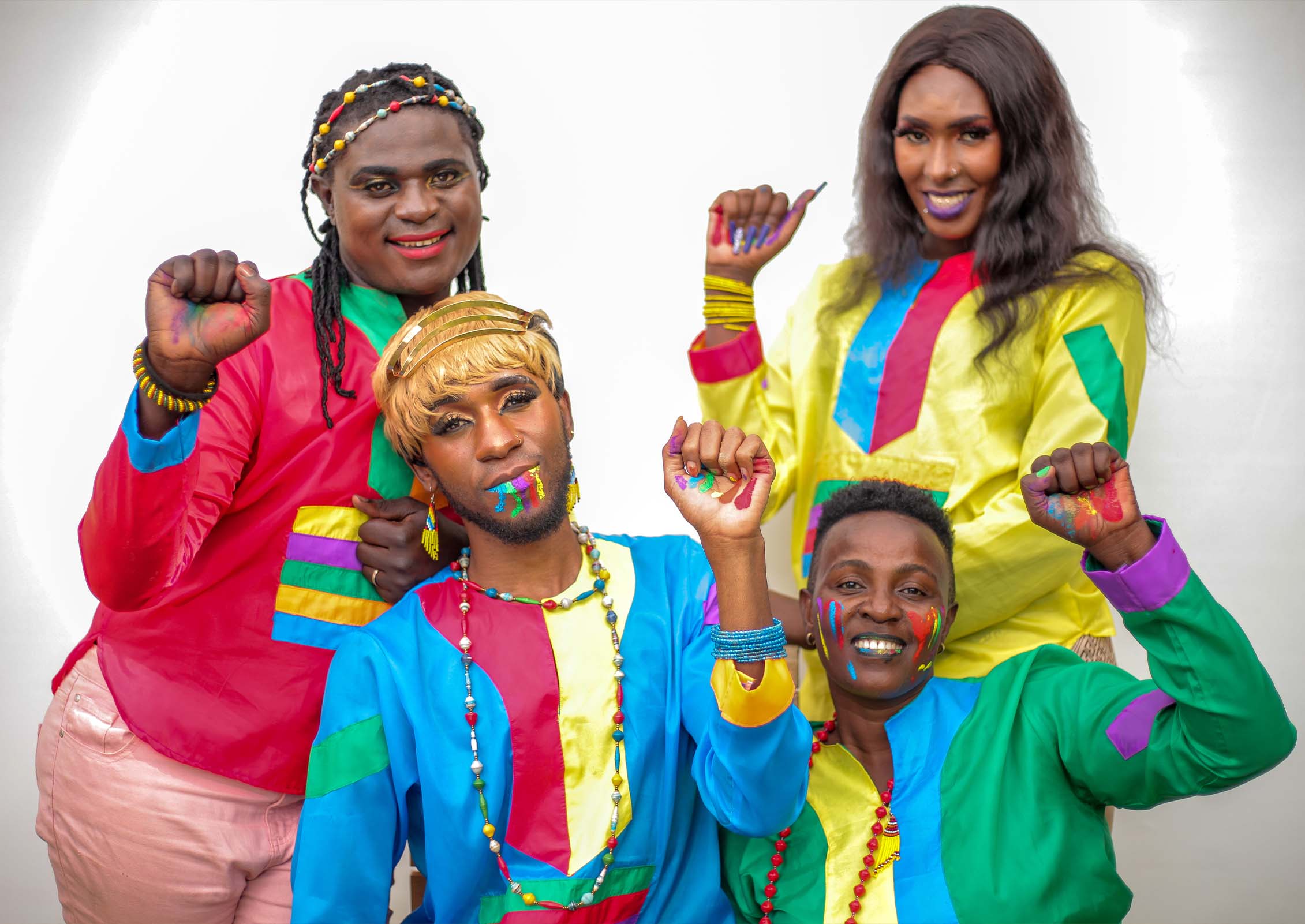 What impact do you hope it will have?

I hope this project can show that we can build bridges across different cultures and countries and unite, across national and cultural boundaries against hatred, violence and discrimination. If this song can give people hope – that’s a start.

What does community mean to you?

Since a young age I have had my chosen queer family around me, members of the LGBT community that supports each-other. This includes people in different countries around the world. We have formed lifelong bonds, through some of the situations we have been in together, like when me and my Ugandan friends we were held hostage at Uganda Pride. In the middle of that horrific situation, everyone stuck together. When you experience something like that, the things that matter in life become very clear. Unity, strength and resilience, sticking together. That is what a community is to me. I have taken that feeling with me.

What does pride mean to you?

Pride in the Western world has unfortunately become like a corporate carnival – it could almost be called McPride! I want to remind people that it isn’t all parties and consumption – it’s about taking a stand for the right to exist. For all of us, everywhere, including countries where our existence is punishable. In the west we may have won our rights – but they are never guaranteed. The pendulum can swing back again.

After the terrorist attack on Oslo Pride it became clear that we are not even safe from hate crimes during Pride celebrations in Scandinavia. Fear is rising in many LGBT communities around the world, and we are still the number one targets of hate crimes. We can’t sit back and think that just because things are better in some countries right now, the fight is over.

As an organisation proving that music can affect real-life change, what’s your message to the rest of the music industry?

Music has always been an important part of queer liberation. Disco and house music came out of gay clubs in the 70’s and 80’s and were our freedom songs to defy homophobia and trauma of the Aids crisis. Queer people have always used music draw strength from and to fight against hardship, even when we couldn’t show openly who we were. Music became our sanctuary.

I remember a time, not that long ago, when being gay was a major stigma in the music and entertainment industry. Gay singers like George Michael and Elton John were in the closet in the 80’s and even into the 90’s. I spent my formative years during that time, and I didn’t really see how I could make it in the mainstream music industry, so I had no other choice but to create my own path. And that entrepreneurial way of thinking has worked out very well for me. The beauty of the times we live in today, is that artists don’t really need big labels anymore. The rules are changing, and we can make our own rules and use music as a platform for advocacy, community building or whatever we want, on our own terms. We create our own music industry

What’s next for Rainbow Riots?

My plan is to keep coming up with new creative ideas to fight this war for equality, and continue to create new collaborative projects in new territories. This is only the beginning! 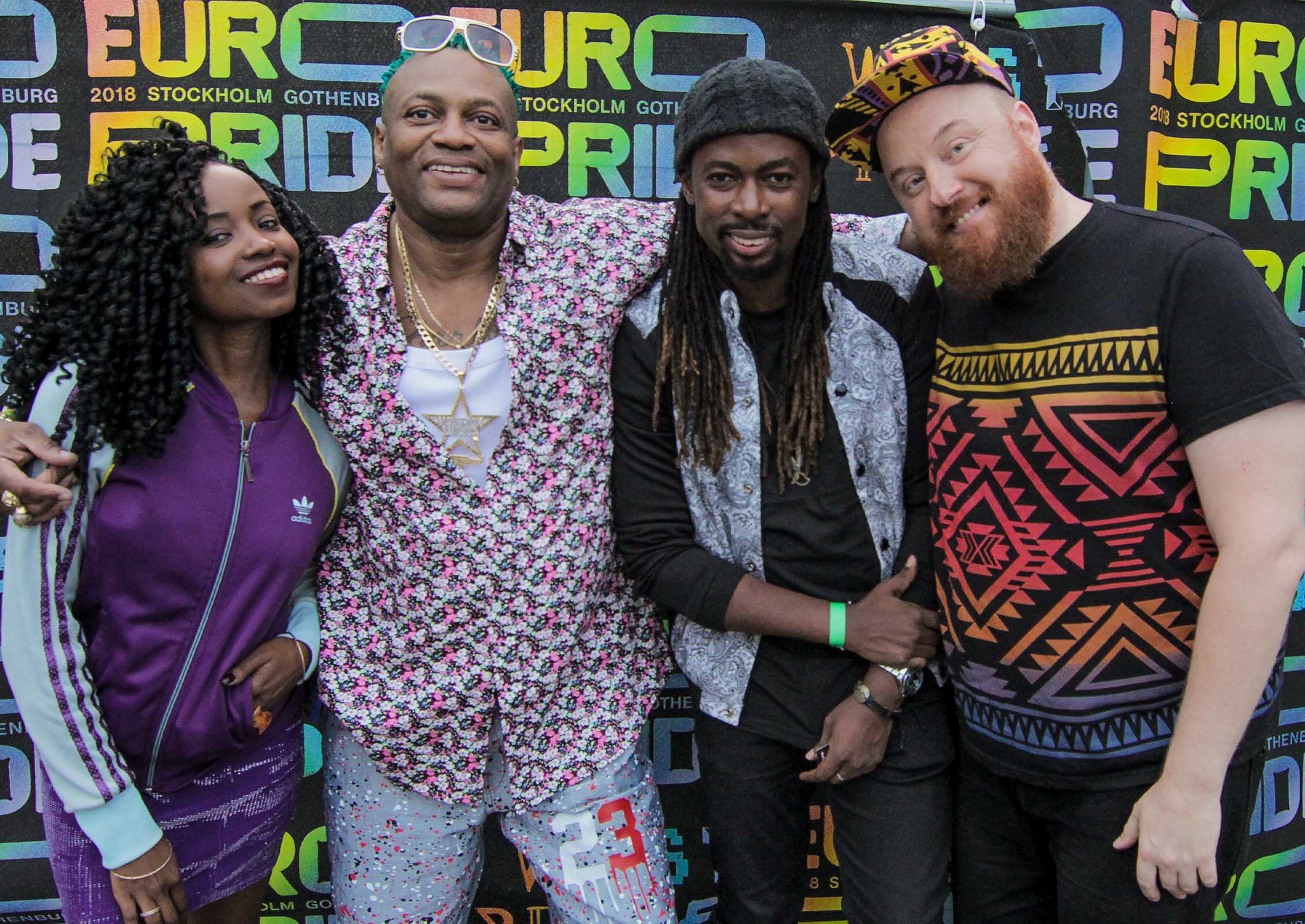 Stream 'We Don't Care' below: