My favourite song by RAYE to date. I felt so happy witnessing the growth of this song over the past couple of months, because RAYE deserves it all. She is an artist who’s been very open about her struggles with her label in the past, and is now independently releasing music that’s authentically her. “Escapism” has become RAYE and 070 Shake’s first entry on the Billboard Hot 100 chart. RAYE has got so much to look forward to - her debut album ‘My 21st Century Blues’ is set to be released Feb 2023, alongside a sold out worldwide tour. I love her.

K-Trap has had such a great year. Releasing his ‘The Last Whip II’ mixtape, which is the follow-up to his 2017 debut. Dropping collab mixtape ‘Joints’ with Blade Brown. Both projects hitting the UK top 20 albums chart. Sold out a UK tour, including two London dates at KOKO, where he brought out Skepta to perform the warm remix. This song has already gone down as a UK rap classic.

The song was originally released back in 2021 on Potter Payper's ‘Thanks For Waiting’ mixtape. It went on to be a huge soundtrack on the finale episode of series ‘Top Boy’. Potter dropped part two of the song in April 2022, adding UK rap legend Nines to it, marking their first collaboration. It’s good to see two rap legends working together, especially with this being the first new music from Nines that we've heard in a while.

“B.O.T.A. (Baddest Of Them All)” by Eliza Rose, Interplanetary Criminal

This song was definitely one of the most played songs on my show this year. East London’s Eliza Rose linking up with Manchester producer and DJ Interplanetary Criminal. This song was huge, it was a summer dance anthem. It marked the first time a female DJ topped the Official UK Singles Chart in over two decades. I was so happy for Eliza. She joined me on my show to talk all about the success of the single and she was so appreciative of all the love and support the single got.

Got so much love for JAE5, the man behind some of the best UK classics. Just check out his ‘The Producers: JAE5’ playlist on Apple Music to see some of the greatness he’s been a part of. He released his debut single as an artist last year linking up Skepta and Rema on “Dimension”, and came through again this year releasing one of my favourite songs of the summer. “Propeller” features BNXN on the hook and Dave doing what he does best.

Back in April, Frisco dropped his seven-track ‘Tottenham EP’, and the response to this song in particular was mad! It was only right they had to drop a remix. Adding the legend Skepta, Digga D and Skillibeng to the song, I couldn't have put together a better line up for the remix myself. Smashed it.

From Future’s album ‘I Never Liked You’, which dropped back in April featuring Drake doing what he does best, the song also samples Tems’ “Higher” from her 2020 project ‘For Broken Ears’. This song went straight in at number one on the Billboard hot 100 chart, did so well all around the world and went on to be nominated for multiple Grammys next year.

Back in June, Drake surprised us with a 14-track dance album ‘Honestly, Nevermind’, exec produced by Black Coffee. While most of my peers were not fans of this album when it was first released - because everyone expected the Drake we all know and love - the album grew on me a lot. “Jimmy Cooks” was the song he rounded off the album with, clearly getting us ready for what was to come... The collaboration album ‘Her Loss’ alongside 21 Savage, which arrived give months later. He knew what he was doing ending ‘Honestly, Nevermind’ with this song. Always appreciate new music from Drake.

In a time where sampling is very popular, I think Aitch did it very well on this song produced by the champion Fred again.., sampling Ashanti’s “Rock Wit U”. I remember when Aitch first posted a snippet of the song. I was a fan from then. It went on to be one of my songs of the summer, reaching number two on the official UK singles chart, and it was nice to see Ashanti join Aitch on stage at Big Weekend to perform it too. Honorary mention to Aitch and Ed Sheeran's "My G", which I wanted to put in this list too. Congratulations to Aitch for dropping his great debut album ‘Close To Home’ this year.

“Tomorrow 2 (with Cardi B)” by GloRilla, Cardi B

Recently named as BET Hip-Hop Awards ‘Best Breakthrough Artist’, what a great year it’s been for GloRilla. I first heard of her when she released “F.N.F” back in April, the song that is now officially nominated at next year's Grammys for ‘Best Rap Performance’. And getting Cardi B to jump on “Tomorrow 2” was a huge moment for her. She released her debut EP ‘Anyways, Life’s Great...’ in November, so happy for her.

Listen to The Rebecca Judd Show Monday to Thursday at 9am on Apple Music at apple.co/_RebeccaJudd. Listen live for free or on-demand with an Apple Music subscription.

The Lowdown With Rebecca Judd 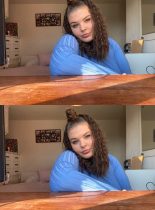 A bonafide broadcaster and presenter on Apple Music’s Beats 1, Rebecca Judd is the warm voice of hope we all need in our daily lives. We catch up with the ray of light to talk positivity and how laughing is the best cure sometimes.