Viral sensation and recent Def Jam signee Armani White talks about capturing the world’s attention and his act of resistance in the face of hardship.

At first glance, the artfulness behind Armani White’s genius may go unnoticed. His career is like an iceberg, there is the tip peeking out of the water for everyone to see, but the true genius behind it all sits deep below the surface.

Upon first meeting Armani, he greeted me with a warm hug, cracked a joke before gingerly sliding his headphones back over his ears – reverting to a silent solo groove as we stepped into the elevator on the way to Def Jam’s office. The 26-year-old comes across as someone who feels at home anywhere. And, once you spend a bit of time with him, you start to understand why.

As for his youth spent growing up in Philadelphia, he learned about some of life’s most ruthless realities early on. The loss of his uncle at a traffic-stop shooting was a pivotal moment for him. “I remember there was nothing I could really do. I had a rough background and I didn’t really learn how to process things, like death, in a way that wasn’t destructive or aggressive.” This is where he began to restructure his thinking, gearing his output in life towards happiness. “That day I ran to the studio and I didn’t know what I was doing there, but I decided I’m gonna write the happiest song in my f*cking life”. 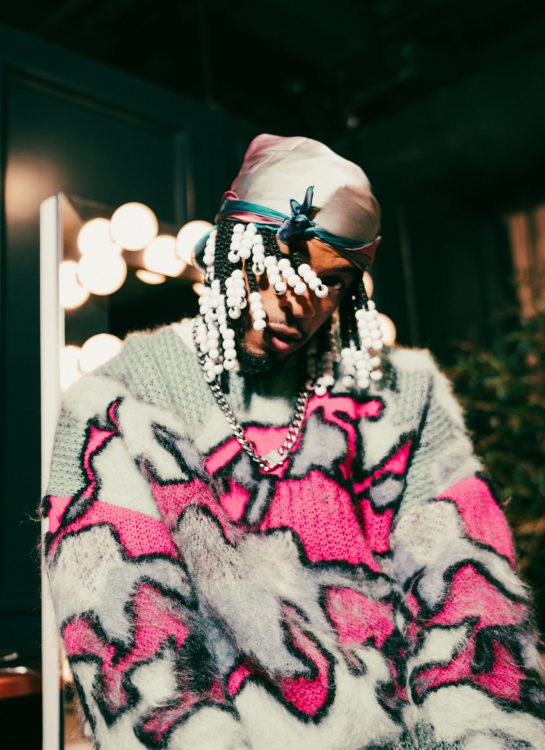 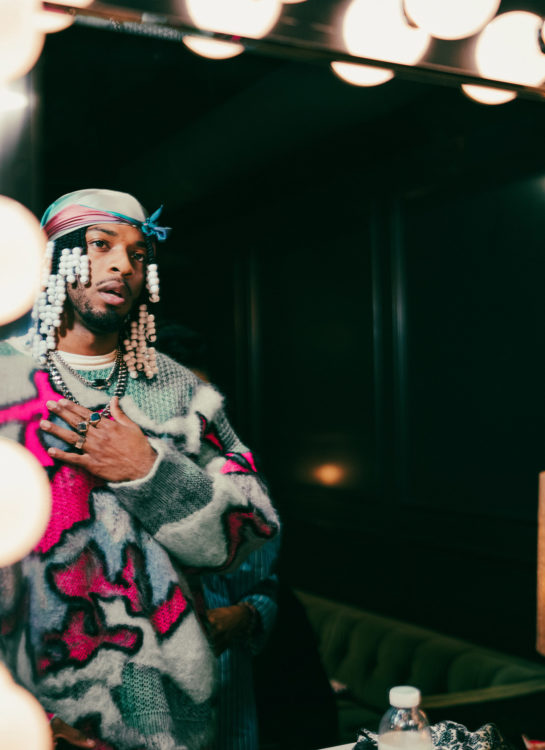 Through finding light in the darkest places Armani eventually created his self-prescribed genre of ‘happy hood music’. “That’s how I want it to be for the average person. You see the smile on my face, you see all my jagged teeth and you have no idea what that the hell I’ve been through… Happy hood music was created so that when you look up to the sky and everything is cloudy, you still find a way to see the sun and create something magical out of the moment,” he muses, before shrugging off the serious turn in conversation.

His first attempts of making music were entirely DIY. “I would rap into a Boost Mobile, and then send it to myself on a computer where I would try and line it all up. Man, it sounded awful.” But these early gambits into releasing independently, speak volumes to his calibrated approach. “The main thing I focus on is communication and social economics… I’m meticulous, I pay attention to how people interact with the music around them, how people interact with their lives and with others.”

It feels as though Armani has been gatekeeping the secrets to time travel: the way he calculates his every move has you thinking he’s been here before and knows exactly how to get things right. From early on he would study the cadence of distinctive rhyme patterns such as that of Ludacris or Jay Z. And soon, his style developed into his own, with tracks like 2017s ‘NYC Window’ where he applied his measured flows in full force. “In my mind, I never knew if I was going to see the world so I wanted to at least understand the world… And understand my place in the world.”

Amongst a lengthy scroll of releases, 2021’s project Things We Lost In The Fire was especially salient. Here, he crams syllables together in his verses without once submitting to a robotic cadence. Paying particular attention to the imagery his songs portray as he chronicles the tragic and true story of a fire which left him without a family at a young age. In February his career took a massive leap when the hook for his song ‘Billie Eilish’ went viral on TikTok. Built upon a rework of N.O.R.E’s ‘Nothin’ and Armani’s signature triumphant horns, the record now has countless streams across platforms.

Now signed with the eminent label Def Jam, he continues his run of formidable delivery on his new single and video titled ‘GOATED’ featuring Denzel Curry and a wonderfully outré cameo from Floyd Mayweather. 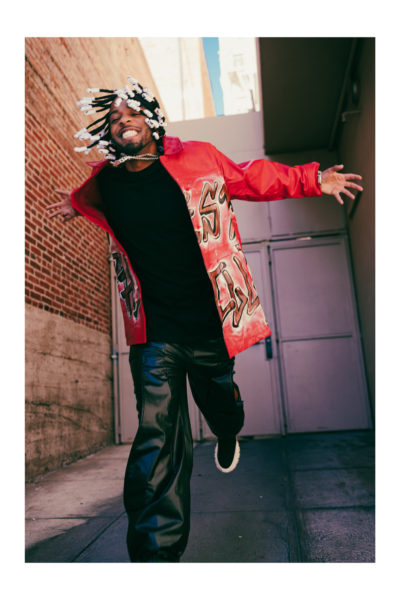 Something that really stands out is that your flows are very much your own. How did you first start to develop your flow in rap?

I was always drawn to anything that sounded different from everything else. So early on, I was just listening to Ludacris and Eminem; or even the cadence of early Roc-A-Fella – so Kanye and Jay Z. Just the way that they had a different cadence and a different rhyme pattern over the top of whatever traditional beats that everybody else would do. It inspired me not to copy, but to push myself in the direction of figuring out who I am and what I sound like. For a while, it was sounding exactly like Busta Rhymes, but over time it started to develop into me. I think the best way to answer this question is: I have a really big personality. And at some point, I learned to put that big personality into the music.

What have you researched or studied in order to make sure your music has this global reach and infallible legacy that it does? Or does it occur organically?

It’s a little bit of both. I will say that more or less everything I do is calculated to some degree. So for example, someone was just telling me about SBTV and different things like that, and I can confidently say ‘I already know about that’. As I got access to the internet, I learned that the internet has access to the world and I wanted to learn about everything. In my mind, I never knew if I was going to see the world, so I wanted to at least understand the world… And understand my place in the world. That was super important for me. It was about finding my footing in each different culture so that once I land, I know exactly where to go out, or what’s going to connect with certain people. Because it’s different everywhere you go. Everywhere isn’t Philadelphia.

How do you compare that to the nature of streaming now?

Honestly, MySpace was kinda the same. And the reason I say that is because the way I looked at MySpace was you have to do what you can to get people to your page. Once you get people to your page, then they hear the music and hopefully, they like the music. But it’s more or less social media – you do what you can to get people to pay attention. And once they pay attention, you know, then the music sinks in. It’s about how you are going to draw the crowd in, and early on, so even me making records and creating a formula now… we create content and media that draws people into what this piece of art is. So it’s not really a huge difference.

You laughed at the mention of MySpace… Is that music on record anywhere?

Sh*t I hope not!. I used to record it all on a Boost Mobile. I would rap into the Boost Mobile, and then send it to myself or a computer where I would try and line it all up. Man, it sounded awful.

Growth is a constant process. There are always new skills you can add to your repertoire that betters the result. So what’s your next step for growth?

Right now, the main thing I focus on is communication and social economics. So, how people interact with others and with their environments, for example. Music, for me, is just the soundtrack to our lives. Of course, there are certain records that I look at and I know this is a breakaway moment – you have to sit down and listen to this, enjoy this and appreciate this. This is fine china. But the bulk of music is made for the soundtrack of life. It’s what I want to hear on my drive, or hear when I’m doing laundry, or hear in the shower. I’m very careful and meticulous, I pay attention to how people interact with the music around them, how people interact with their lives and with others. So all of that accounts for how I plan to release the music, how I write the music and what style of music I’m creating.

This might be an obscure question, but I think you’ve touched on it a bit here. I get the sense that the way you experience music might be a bit different to that of others… It’s something Pharrell talked about, which was…

Yes. How do you experience music personally?

It’s a little bit of synesthesia. Also, it might sound weird, but body movement is how I experience music. I think one of the coolest forms of art is dance. I never really got super into dancing other than the choreo… If music doesn’t just make my head move but makes my body move – whether that’s my fingers or my foot that starts tapping – that’s when I know I’m really in tune with it and line and experience the music. I’m not just listening to music. And that’s the best way I like to appreciate music.

You described your genre as ‘happy hood music’ and said you just want to ‘inject fun into it’. Where does this perpetual sense of positivity originate from in your life?

It’s a really dark place. You see the smile on my face, you see all my jagged teeth and you have no idea what the hell I’ve been through. And so that’s really what I want to portray – no matter what you go through, you still find a way to stand up and smile. So I put that energy out into the world. The real music started because my uncle was killed in Philadelphia at a traffic stop. When that happened, I remember there was nothing I could really do. I had a rough background and I didn’t really learn how to process things, like death, in a way that wasn’t destructive or aggressive. So at that point in my life, I left a lot of stuff behind with the idea that I just want to be happy again.

There’s these hood things, these things I’m going through that’s pushing me closer to the sun, in search of happiness. I ran to the studio and I didn’t know what I was doing there, but I decided I’m gonna write the happiest song in my f*cking life. So that was the root of ‘happy hood music’. Again when my father first told me he had cancer I ran to the studio because in my head I was thinking… I want to feel good again, I feel like f*cking terrible right now. When I say it, it seems unrealistic, especially to the average kid in Philadelphia but it’s really there to make happiness feel attainable as opposed to wanting to go deeper into the trenches.

In the grand scheme of things, what does success look like to you?

My entire existence is surrounding the fact that I’m super competitive. To a point that it’s just unnecessarily competitive. So for me, it’s just about greatness. I say it all the time – I want to build the tallest skyscraper in this sh*t so that when I’m gone, somebody else can look up to it, like the way people see the Eiffel Tower. People who want to be in music or just love music can look up to success and say that’s where it’s at. And that’s the legacy that I want to leave behind. The one where I’m staying up all night or I’m out till 4 am and I gotta leave the club to be here for 10 am to talk to you – it’s because I want to build that.