Andy Clutterbuck and James Hatcher, otherwise known as the British electro-soul duo HONNE, would define their new mixtape as “salted caramel” because “it’s smooth”. They’re not wrong, the whole record is a sonic bathtub of butter.

‘no song without you’ was dropped earlier this month, after two years of anticipation following their last release. Standing at 14 tracks, the mixtape is more similar in length to an album. However, according to Andy, the songs are a “bit of a side-step” from what they’ve put out before. By calling it a mixtape rather than an album, James and Andy were bracing their fans for a slightly different dish than they were used to. Despite their apprehension, the result is still a thoroughly warm and enjoyable record, with several sing-along numbers such as “free love” and “la la la that’s how it goes”. Plus, being a mixtape, it’s a chance for HONNE to stretch their musical legs with shorter, more experimental pieces, such as “iloveyoumorethanicansay” and “our love will never die”.

As well as providing an outlet for their creative exploration, ‘no song without you’ also serves as an emotional outlet. Andrew, who wrote most of the lyrics, admitted that he’s not the most open person, but that writing his feelings down and turning them into songs is how he expresses himself: “Music, in general, is cathartic, just to get something off your chest. I think that’s why we enjoy it.” 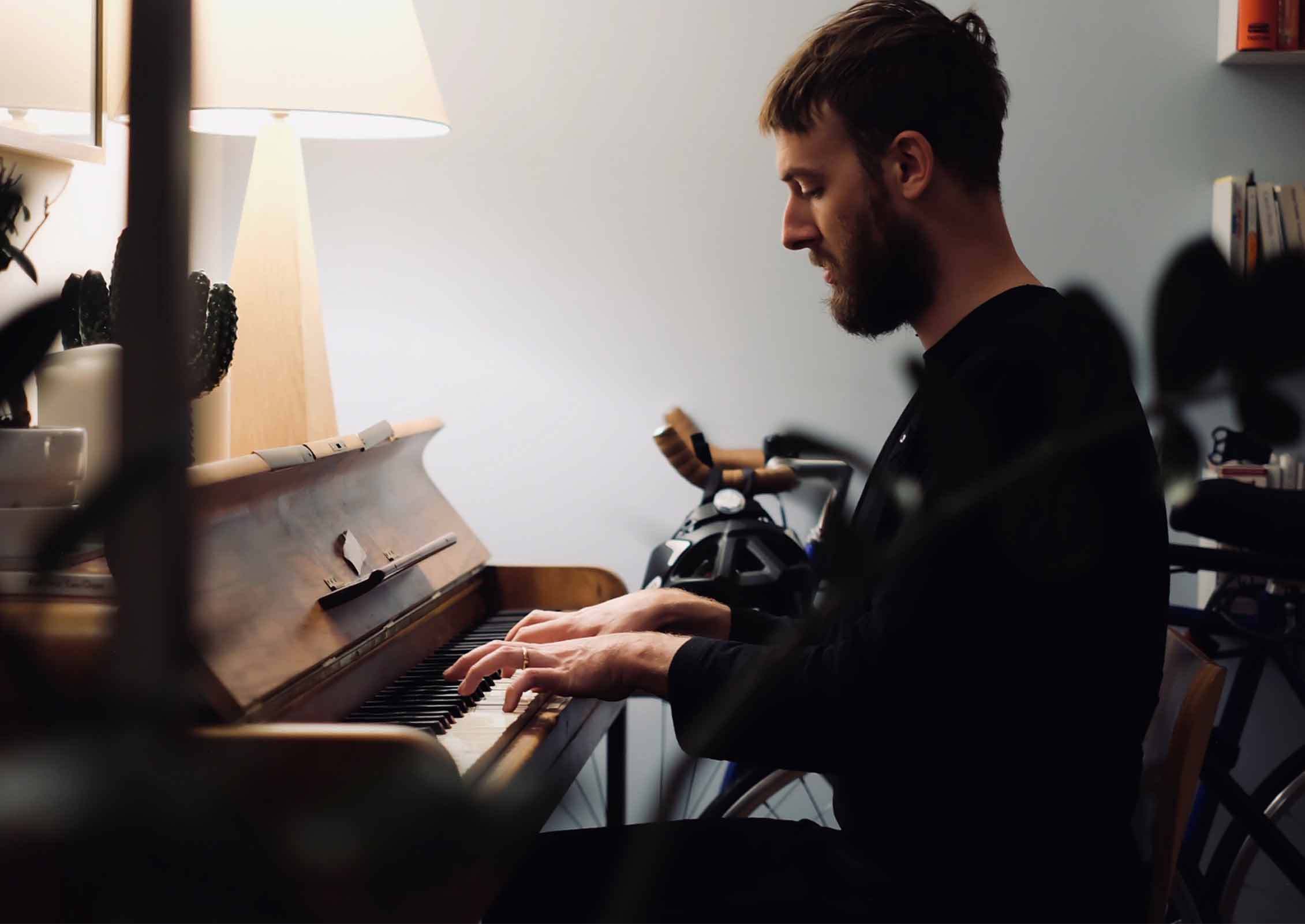 Their personalities match the music they make too. When we speak over Zoom, they’re charming and at ease, joking around with each other in a way that only old friends can.

Although they have both been playing music for about two decades, the pair didn’t meet until their late teens. Having had a similar drive to learn instruments to one day be in a band, and a shared dream of touring the world, it’s no wonder that they gelled musically and formed HONNE. It’s nice when dreams come true, isn’t it?

HONNE released 5 EPs before they dropped their highly anticipated debut album, ‘Warm on a Cold Night’, in 2016 (which went 6x Platinum in South Korea). This was then followed by Love Me / Love Me Not in 2018. Over the years, the pair has amassed more than 1.2 billion global streams and have collaborated with a host of other artists over the years, including BTS, SG Lewis, Tom Misch, Whethan and Anna of the North.

We had a chat with HONNE about making music in lockdown, working with Holly Warburton on the mixtape visuals, and the David Attenborough collab that never happened. 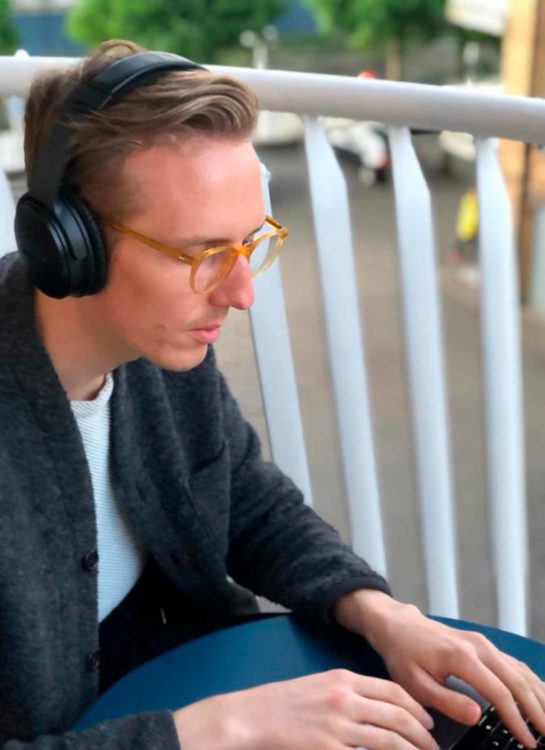 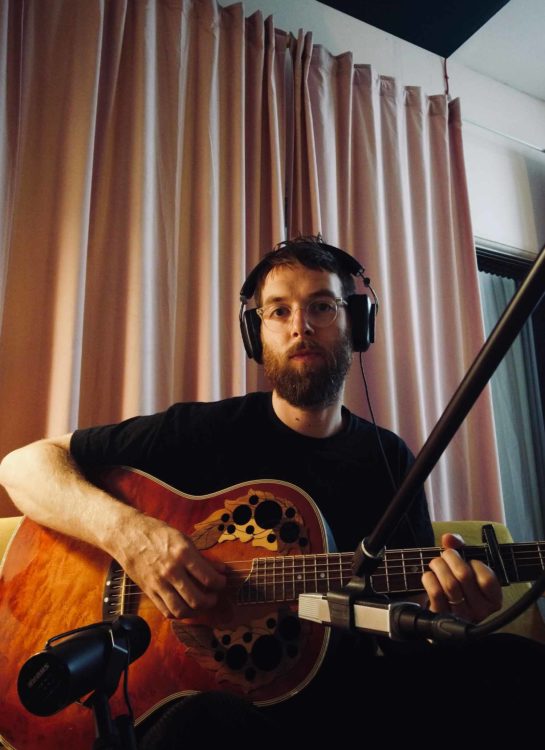 How have you found it making music from home?

James: Yeah, it was a bit annoying. We’d just got a new studio just before lockdown happened and we were in there for about two weeks, got it all kitted out, spent a load of our hard-earned money on it and then couldn’t even use it… but it’s fine. We’re able to come back in every so often now.

Have you found this time to be quite inspiring?

Andrew: It’s a weird one. For most people, there’s moments where you feel the most uninspired you’ve ever felt, and then through it all, because of everything that’s going on, for us, we just try and find positivity wherever we possibly can. We just use the situation to just write music that hopefully brightens people’s lives a little bit.

How far in advance of lockdown was the mixtape created?

James: It was probably 60/40 before. It all started, we’d written loads of music over the last couple of years on and off from touring, and then we were like, ah, we don’t really like any of it [he chuckles] and then went to LA in January for a little writing trip and that’s where we had a session with Pomo and wrote “no song without you.” With each album, we have a song that becomes the blueprint for how the rest of the album will sound, and that sound was that for us. We were like right, that’s in place, let’s try and write a mixtape around this sound.

You’re defining this as a mixtape, not an album?

Both: Yeahhh [they laugh].

Andrew: I think we’ve called it a mixtape. It’s kind of an album in length; there’s lots of music on there, but it’s kind of a side-step for us in terms of the music or the way it sounds is a bit different to where we’ve gone before. So, we’re really calling it a mixtape just to brace people on what to expect, that it is slightly different. It still feels warm and has the same kind of message that we would normally put out in our music, which is nice. We always thought that it was a selection of songs that we’re putting together to give to a loved one, like a crush or something, which is mixtape vibes, so that’s why we’ve gone with a mixtape. 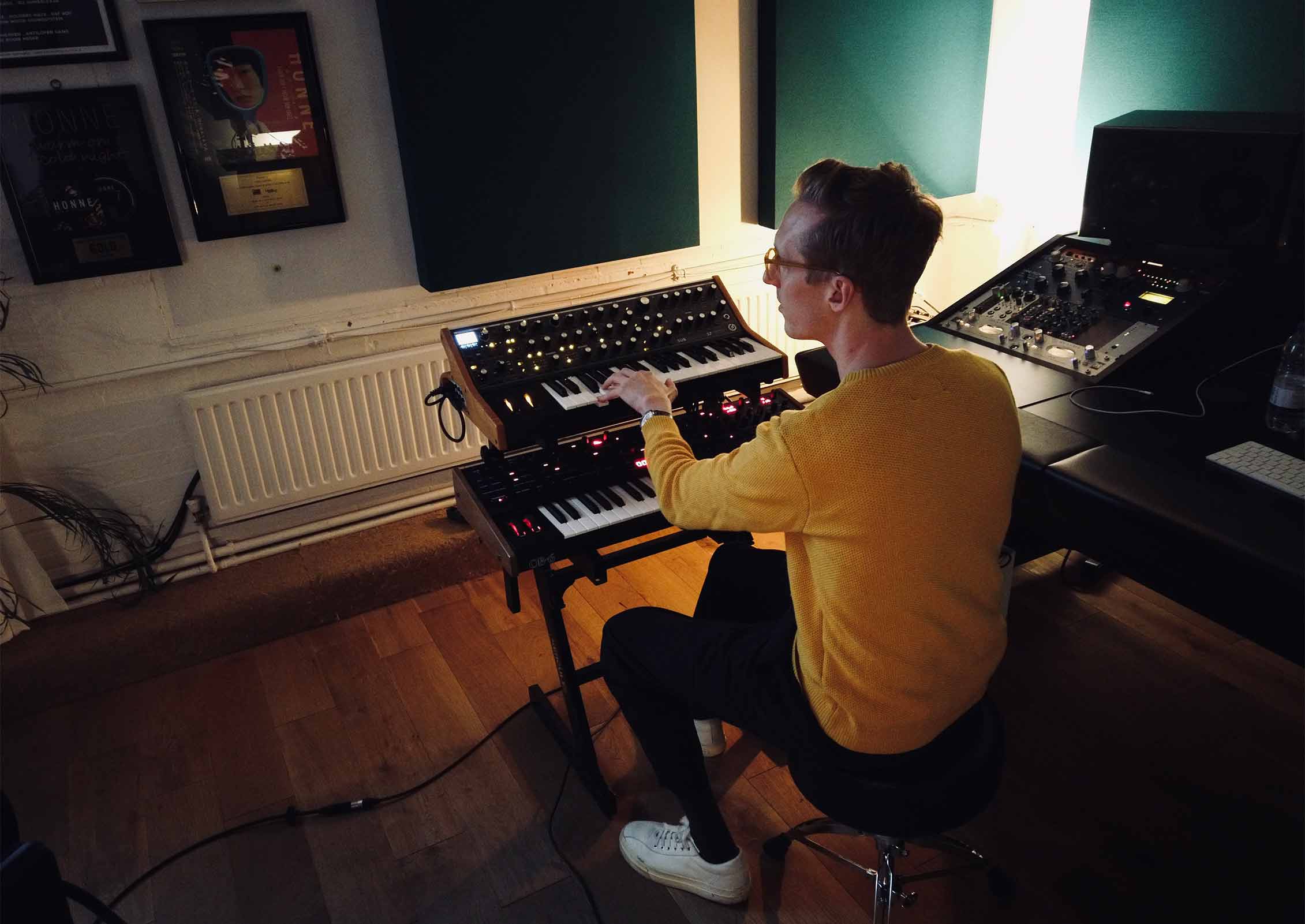 The mixtape has such a feel-good vibe, even on the songs with heartbreaking lyrics. When you’re creating, do you find that the act of creating music itself helps you move through and process your feelings?

Andrew: For me it does, yeah.

Andrew: I’m not the most open person, so I quite often don’t talk about how I’m feeling or what’s going on, and rather I’d just write a song or write some words about it instead, which my wife doesn’t enjoy very much [chuckles]. She’d rather I just talk about it in person. I find it easier to bottle it all up and then…

James: Chuck it on an album [laughs].

Andrew: But yeah, music, in general, is cathartic, just to get something off your chest. I think that’s why we enjoy it.

James: It’s nice to have music to fiddle around with and take some hours out of the day; being creative. We’re lucky to have that as a hobby and a job.

Andrew: It was about a year and a half ago that we had written out all these lyrics, and it was even longer than that when it first started

James: We should probably at some point…

Andrew: Post the whole monologue yeah. We had this weird idea… It was just information to remind ourselves not to be preachy, but to remind us – me and James – what we can do in our lives to make us happier and make us feel better.

James: I watched the lyric video with my girlfriend – we’ve got lyric videos for all of the tracks – and I watched the “smile more” one with her this morning because she hadn’t seen it yet. There’s one line that says, “don’t dwell on Instagram” and she just went [pulls knowing face] – and I was like, “it’s a reminder to ourselves of what we need to be better at!” [laughs].

Andrew: We had this plan to try and get David Attenborough to speak it [laughs].

That would have been amazing! Did you reach out to him?

James: No, we never managed to reach out to him. I think he’s quite old school…

Andrew: [Laughing] He needs to be written to.

James: We don’t know how to write letters [laughs]. We can’t write! 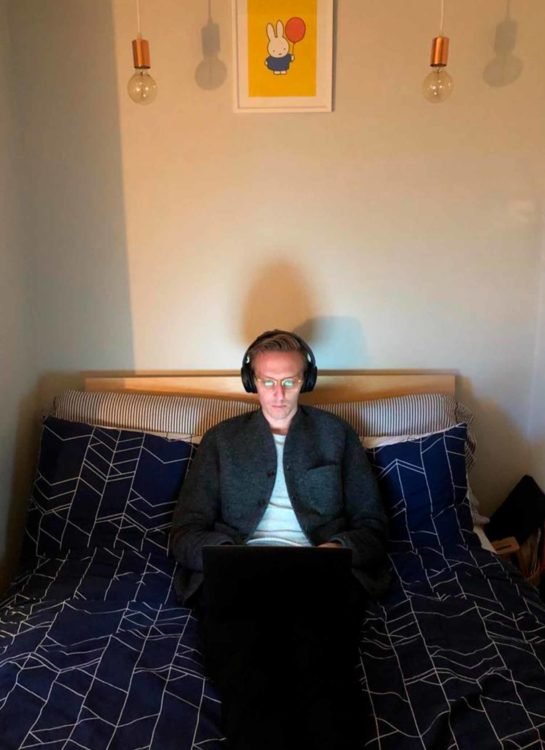 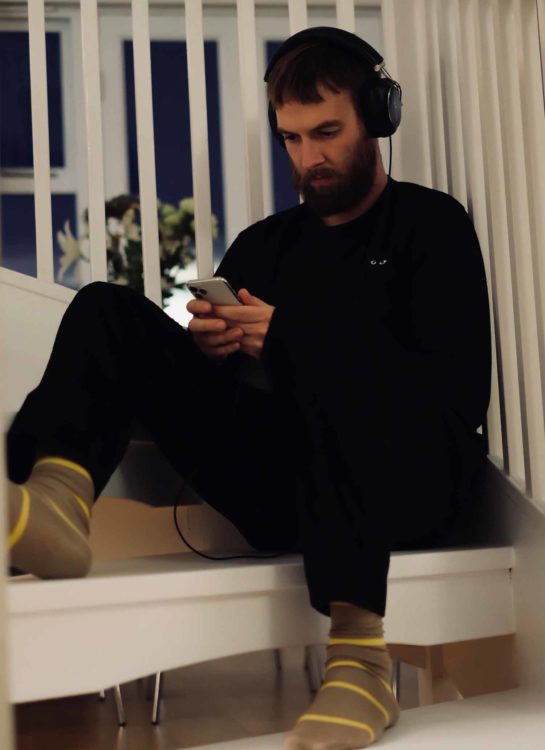 Did you have anyone else in mind that you wanted to speak it, or was it just David Attenborough?

James: There was a little girl who was in a video called…

James: Her dad is a songwriter and he writes these songs and gets his daughter to sing on them and they’re just really, really funny. They’ve got animations to them, so we kinda wanted her because we thought it would be very innocent and cute, but we just went with Andy [laughs]!

Which parts of the process were the easiest, and which were the hardest?

Andrew: I’d say we normally find hardest trying to match some sort of visual aesthetic to the music because we can’t draw. We can find things that look good and then go to someone and be like, can you recreate this? But sometimes it’s very difficult.

James: Eventually we’re gonna have to, but we’re not ones to sing along to our own music in a music video, leaning out of a car [they both laugh].

Andrew: But I think we got lucky in that we found Holly Warburton, who animated the video for “no song without you” and she’s also done the lyric videos for every song. Just her style has captured it all perfectly.

Andrew: We got in touch with her before lockdown even happened, so before Coronavirus, we just thought animation would suit “no song without you” quite well. I’m glad we got in there first with animators because I think their jobs became very…

If this mixtape was an ice cream flavour, which would it be?

Listen to HONNE's mixtape 'no song without you' below: 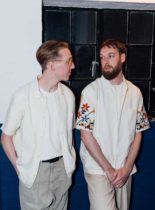 Before heading Stateside to play a string of North American dates this Spring, HONNE wrapped up the UK leg of their tour at Brixton O2 Academy with a bang on the 28th of April. 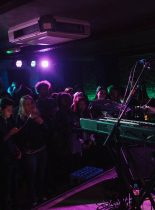 Treating our northern friends, #SONEGXNOTION took to Leeds for the third night on our free music tour 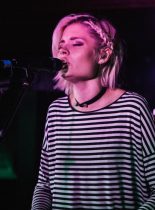 See what went down at Leeds’ Hi-Fi club.