Indie-pop band, HOAX, question the notion of 'being' with their long-awaited kaleidoscopic 17-track project, aptly named 'b?'

HOAX – the musical brainchild of Michael Raj and Frantz Cesar – are an indie pop band based in Houston, Texas. Alchemising an extensive range of sound from 60’s pop and 70’s Motown to alt-R&B, the band have branded their style as “empathy pop”, a philosophical genre that thematically focuses on the human condition and how social constructs play and interfere with it.

HOAX’s debut release has been a long time coming. Their 17-track project, entitled ‘b?’ is a pinnacle example of their “empathy pop”, brimming with nostalgic melodies and soaring soundscapes. The concept narrative album takes a pilgrim-like approach, with each track on the album written from the perspective of a character grappling with the essence of “being”.

Diving into this concept further, Michael Raj explains: “Behind all the facades we put up, under all the masks we wear – there we are: Ourselves in Being form. It used to be very hard for me to explain what it meant ‘to be’ to other people. And believe me – I know I am not original in this line of questioning. For God’s sake, we all know what Shakespeare said through Hamlet, but as the album developed, it became clear to me that ‘being’ is synonymous with ‘peace’. And that peace looks different in everyone’s mirror. It starts with self-reflection, and never ends with anything other than life devotion to your truest form. I’ve said it so many times throughout our career, but if there is anything you take away from listening to HOAX and this album, it’s to please prioritize your peace. We are only here for a moment in the blip of infinity, and during that blink, our peace and being will always be under the scrutiny of the randomness and chaos of life. Perfect the art of sitting still, to know yourself, show and embody empathy, and be authentic to your peace.”

The opening track “tree” draws you in with its cinematic build-up, going on to ask the questions that the rest of the project seeks to answer. Cascading through the album, the enchanting titular track “b?” acts as the hinge and centre of the whole project, with no better song encapsulating the notion of “being vs. doing” that HOAX aims to explore.

HOAX are Ready for the Next Chapter

Texas outfit HOAX walk us through the creative process of their debut concept album 'b?’ and their plans for the future. 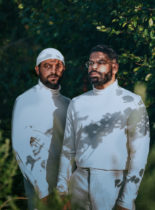 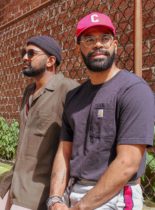