Philadelphia. A city famous for being the Fresh Prince of Bel Air’s stomping ground, sizzling cheesesteaks, roaring dirtbikes and some of the best rappers the side of the western hemisphere. It’s no surprise Pennsylvania’s largest city has forged some generational talent.

Enter Brett Gray. A Philly native well-versed in both movie sets and the recording booth, churning out stellar performances and wind-swept R&B tunes. Gray sharpened his tools, graduating from The Philadelphia High School for Creative and Performing Arts before fully diving into acting. His first major Hollywood look came in none other than the award-winning Netflix drama series When They See Us, where Gray assumed a supporting role.

Gray further amplified his footprint in the industry, bagging a leading role in Netflix’s coming-of-age teen comedy show On My Block. Assuming the role of Jamal, Gray gave the show much-needed gravitas, goofiness and geek-fuelled one-liners.

Gray is steadily building up his portfolio on the music side of things, with three EPs under his belt with eyes to expand his musical fleet by hard-wiring dance-pop, retro R&B, and soul to his instrumental’s circuitry.

As the dust settles over On My Block’s fourth season, we spoke with Gray to discuss his career, the faces of mainstream masculinity and what’s on the horizon for the actor/musician. 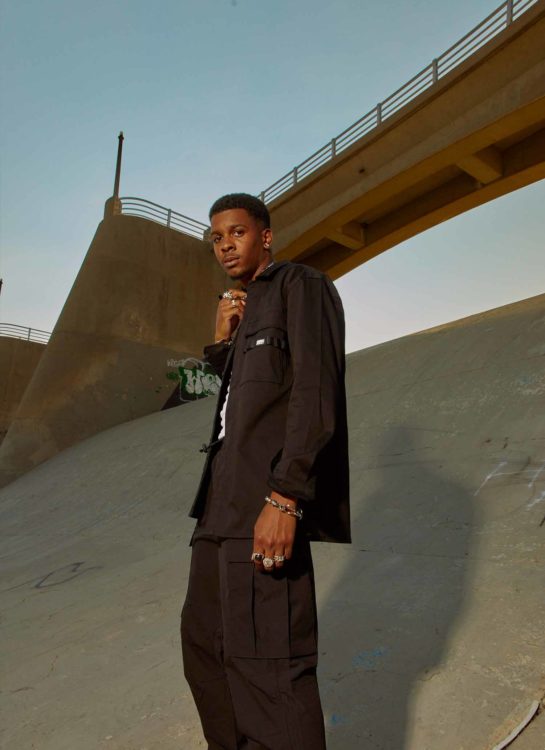 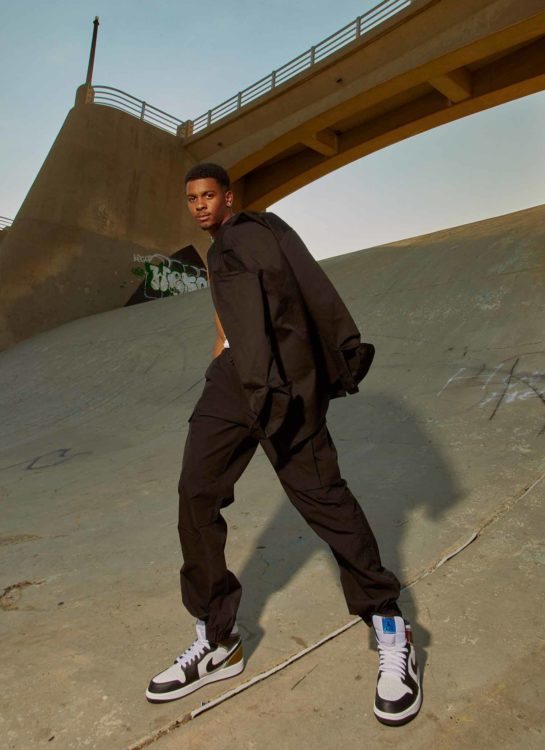 Things are going pretty well for me right now, I’ve been pretty been lucky.

If you were to cast your mind back a few years, breaking through Philly’s creative bubble, what kind of opportunities were on the table for a young Black actor such as yourself trying to break into the industry?

Umm, to be honest, I didn’t see much. I didn’t see a lot available. For me, Jamal was sort of perfect and outside of the realm of what I usually do both at the same time. So, it felt like the stars sort of aligned. But to be honest at the time, I didn’t feel like there was much actually for me in film and TV at my age, in my type at the time, no.

One of the first times we saw you was in the premiere episode of the mini-series When They See Us. The show is unfortunately relevant if we compare it to the real-world socio-political climate. In light things like the #MeToo movement and Black Lives Matter’s global outreach, what was it like working on the show like that, and what kind of insight can you give into its inner-workings?

Yeah, I really like to do projects that speak to me or projects (even if my part is small) stories as a whole is something have captivating narratives. I was really lucky with When They See Us because the show really represented everything I would want out of a show. I got to really speak to something that really meant something to me. Also, I got to have an important scene and sort of like help to propel that that story forward in some way even though it was small.

I’m used to doing things like When They See Us then like a big, outrageous comedy like On My Block. Yeah, I sort of come from more of the theatre and drama and world, so On My Block was I was actually more of a departure for me creatively than so than When They See Us.

That’s so fascinating, because that’s obviously your breakout role which has sort of forged you into a pop culture icon.

It was actually such a happy accident. My character Jamal was written very differently before I stepped on board. I did not think I was going to be chosen for the role. Jamal was meant for someone larger, taller—like they wanted him to actually look like a football player. It was just was not it.

He’s a sportsman, he’s popular. But also, there’s this big Black nerd aura around him. How do you feel representation is for young Black kids to see characters like Jamal in the media, showing that Black characters are far from just a monolithic racial stereotype?

I think it’s super, super important like you know? The young Black male doesn’t just look one way. Umm, back in high school, I was pretty popular, titled the class clown and I think everyone loved me. I say this to say, I wasn’t a jock or anything like that. When we do look at the portrayal of young Black men, Jamal can be looked at as something out of the ordinary, but at the same time, something people are used to. People will be like, yo, my little brother is exactly like that!

There are lots of people in real-life scenarios on the football field who are lit, who might not be the largest, so I’m glad my work can kind of broaden the depiction of how young Black youth is presented.

So, season four of On My Block out now and that’s the show wrapped up for good. Outside of the spin-off in the works, this is probably the last time we’ll see the Freeridge residents. How do you feel about the show’s legacy?

Yeah, I don’t know it’s weird. It’s like this is the first time I’ve ended a show. The shows only just wrapped up so I have no idea how it’ll feel in the long run.

I guess it’s not really set it in yet.

Not at all. You said legacy though. I really do hope the legacy that On My Block leave is that it was one of the first sort of young adult shows to pioneer such a diverse young cast sort of at the forefront of the ensemble and I’m really, really proud of that. 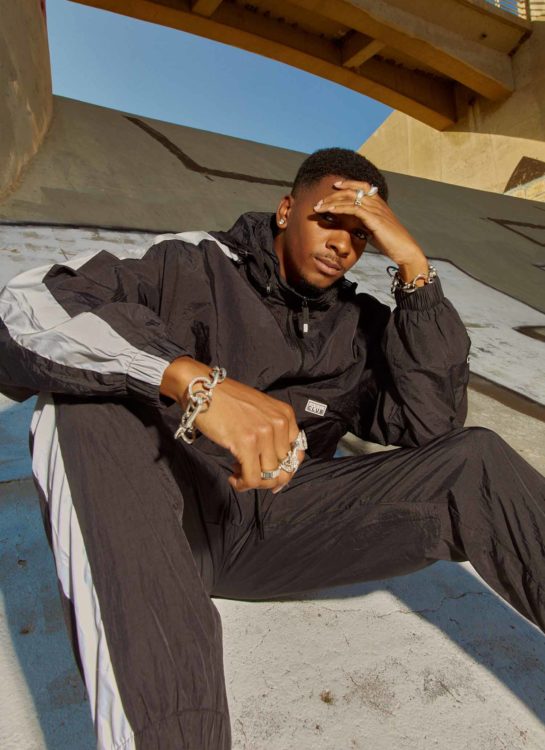 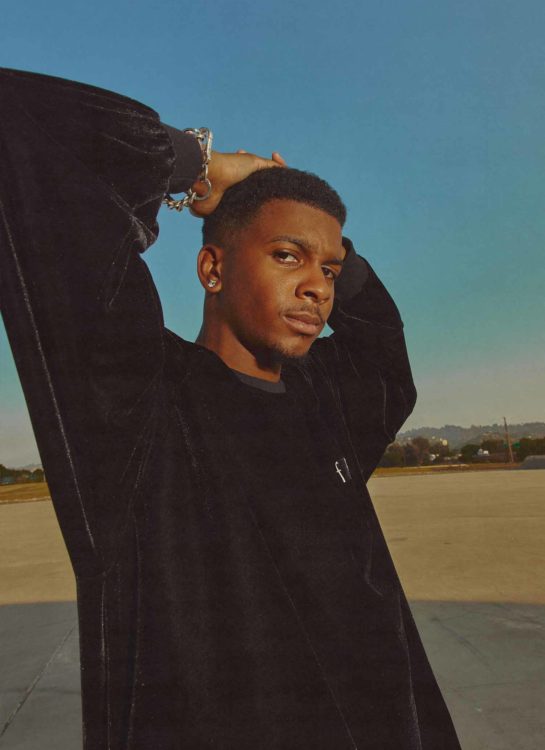 What was your favourite moment from the series?

Well, this is going to be really like contradicting to what I just said but that their final scene of season three we see that flash forward of us and we’re not really friends anymore, that’s my favourite scene because I felt I felt that was representative of real life. With my high school experience and my friends, you know like as we get older, you don’t always part ways in a bitter way, you just grow apart. There’s no resistance either, as you get older it’s just things change. I really felt like I could relate to the end of season three personally.

News has recently broken you’ll be partnering with Nickelodeon and joining the sci-fi behemoth Star Trek for their new animated show Star Trek: Prodigy. You’re set to play Dal, a 17-year-old alien, who’s pretty plucky, excitable and full of adventure. What can you tell us about his character? and how do you feel about taking on this franchise which is stereotypically seen as stoic and grand, and reimagining it for a new audience?

It’s awesome! It’s actually funny you say that because I remember the crew were very adamant about me doing lots of research on the franchise as a whole. I wasn’t a huge fan as a kid, but the more I got involved with the show, the more I fell in love with Star Trek. I actually saw a LeVar Burton from Star Trek: The Next Generation at the last Star Trek Day we did. I don’t get star struck at all, even when I love their work, but when I saw LeVar Burton I got totally nervous, I was like woah, because I guess he played such a poignant role in my own childhood.

As you work in both music and film, there’s a lot of creatives out there that spring to mind who do both, and do both really well. I’ve actually got a quick game with you I just want to play. Can you tell me who is better at both sides of the coin, Jamie Foxx or…

My answer is Jamie Foxx, you didn’t have to say another name!

I was going to say Ice Cube

Jamie Foxx. Jamie Foxx is the best at every single thing.

Listening to your Eazy Daze EP, I hear a lot of 2000s R&B, 70s Motown with a dash of electropop in there. With that eclectic soundboard in mind, I’m really curious as to who inspires you?

It’s so crazy you say that because that is the most accurately, I think anyone has ever described is genre thing on building I tell people trap-soul, early 2000s R&B like when I go music producers and they’re like what are you talking about?! 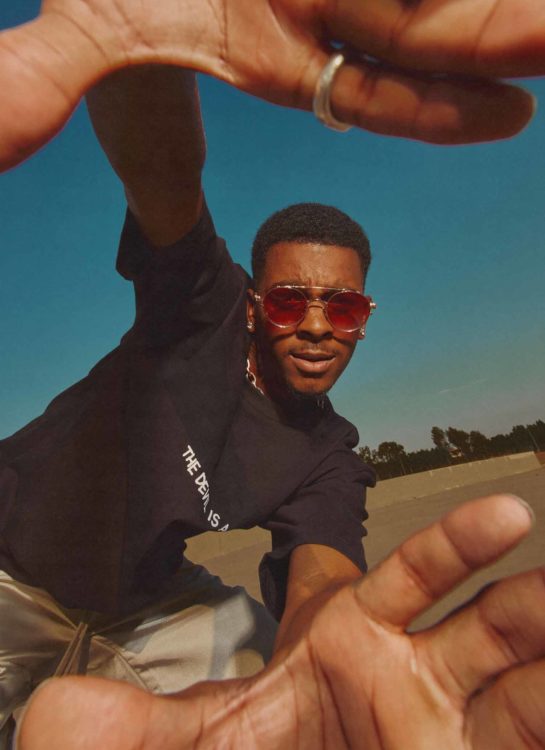 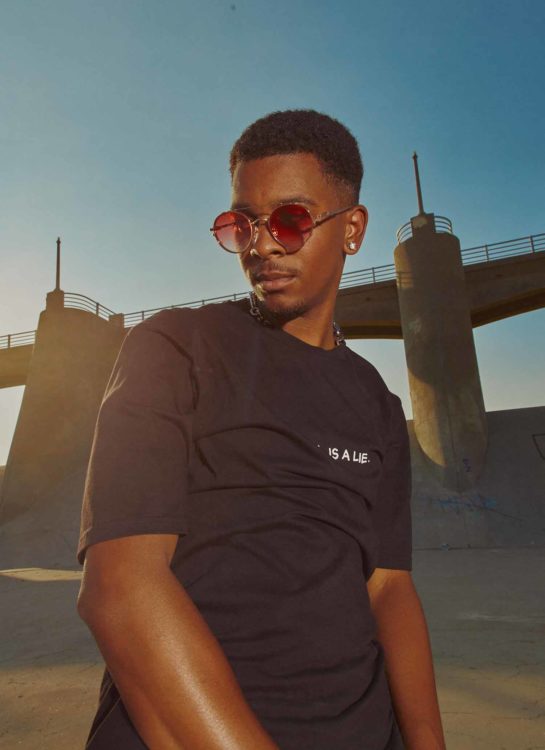 I think my style comes from my mother. When I was growing up, my mom listened to a lot of Janet Jackson. I think that’s where I get a lot of my pop inspiration from.

All of them! Her entire discography, my mom put me onto all of her stuff. I also got a lot of TLC, Aaliyah, Usher, Ne-Yo and when I was growing up, like Chris Brown was really popping as well as the legends like Michael Jackson and Prince. I think my style really comes from that big melting pot of what I listened to growing up. Being from Philly, there was always soul around me, the Motown sound was everywhere. It’s also worth mentioning artists like Lana Del Rey and Frank Ocean who carry like this magic aura about them, they’re really inspiring too. I will get my style really really, really, really, really right one day. It’s gonna be crazy.

Okay, since we talked about R&B classics, I’ve got another game for you. What nineties R&B classic would you take with you onto a desert island if you could only have one? D’Angelo’s Brown Sugar or Aaliyah’s One In A Million?

D’Angelo or Aaliyah? That’s evil! You’re about to get me cancelled either way!

I want to preface this by saying there is no wrong answer here.

You can say both, that’s fine

The reason why I wanted to bring those two albums to you in particular is because when D’Angelo was coming up, he almost set his own standard of masculinity. He wasn’t the tallest guy or overly tough, but he had a certain quality to him his peers lacked in terms of his appearance and music. Equally, Aaliyah, especially on her sophomore album was really into performing. Whether it was in her videos, stage performances, catwalks and what have you, she was very animated. Looking these two R&B classics, I really feel like symbolically they’re both of your infinity stones.

You have “the new masculinity” on one hand, and this performer extraordinaire on the other, and I feel you’re always balancing these two.

I tell people that all the time. My heart is in is in performing. Whether that’s on a set, on a stage or the recording booth for an animated character, my first love is storytelling and performing. For me, music is the story that I get to tell from my perspective. With acting, that’s someone else’s story I get to help them portray and flesh out their storyline. It’s very much two different worlds for me, but I do feel that infinity stone analogy.

If you could sum up your artistry into one word what would it be?