As the world's biggest stars hit the 'Gilded Glamour' Met Gala carpet on Monday, take a look at our styling highlights from the most elaborate event in the fashion calendar.

It’s the first Monday in May, and the glitziest fashion event of the season has returned once again to the steps of New York’s Met. Alongside a white-tie dress code, this year’s theme: Gilded Glamour. Referencing the “Gilded Age” of New York City, a term coined by Mark Twain, the period was one of growth, extravagance, and social transformation between 1870-1890. Films such as Edith Wharton’s ‘The Age of Innocence’ represent the trends of the time, synonymous with corsetry, bustles, tulle and plenty of decadence.

With the designers holding the invites and therefore choosing who to dress, every celebrity guest must be personally approved by Anna Wintour and Vogue. White-tie attire traditionally entails black suits and tails for men, and floor length dresses with opera gloves for women, but designers were encouraged to interpret the theme through a modern lens. As usual, this year saw stars follow the dress code to varying extents, with some styling surprises. There was a unexpected amount of mesh, and the internet swirled with confusion over why so many had chosen black as their colour this year.

Co-host and reliable Belle of the Ball, Blake Lively bought one of the best hitting looks of the night. Not only a hand-painted, foiled and embroidered gown, the tulle of the dress then unfolded for a reveal RuPaul would be impressed by. Blake told interviewers on the red carpet that the details referenced the architecture of the Empire State Building, Grand Central Station, and the Statue of Liberty, complete with a seven spiked headband symbolizing the seven continents, and representing “inclusivity, welcomeness, and freedom.”

Another favourite of the night that kept more traditionally with the historic theme, Billie Eilish’s Gucci look was almost unanimously reviewed as ‘understanding the assignment’. Instagram page Diet Prada made the link between Billie’s dress and an 1885 portrait of Madame Poirson by John Singer Sargent, demonstrating the singer really did her homework. With a desire for sustainability, the dress also utilized pre-existing fabrics.

Never one for half-hearted fashion, Motomami Rosalía certainly bought both the gilded and the glamour. One of the evening’s many corsets, the gown also included a ruffle train and elaborate beading. The Spanish artist’s signature futuristic sunnies were also obviously included.

Evan Mock in Head of State

Gossip Girl reboot star Evan Mock is no stranger to the steps of the Met, but this occasion required slightly more formal dressing. Whilst many men donned black suits, Evan’s look was not only theme fitting, but refreshingly individual. Designed by Head of State, a label founded by Taofeek Abijako when he was only 17 years old, the brand’s ethos includes “unique clashing intersectionality” and “aims to provoke and further dialogue about the past, current and future state of marginalized spaces.”

Winning the award for the best accessory of the night, Lizzo looked ‘Good as Hell’ in this Thom Browne corset dress. Featuring a dropped skirt and exaggerated hip silhouette in black silk, the embroidering and detailing is to die for. Browne was one of the designers who chose to dress his stars almost entirely in black.

Moving to the more modern interpretations, alongside the likes of Stormzy, Naomi Campbell, and Kate Moss, Bella Hadid was dressed by Burberry. Designed by Riccardo Tisci, the custom corset and lace leggings were overlaid with a chiffon skirt and shawl, lace gloves and leather sandals. Bella Hadid could pull off pretty much anything, but her period hairstyle and accessory details really tie this look together.

Another of Versace’s celebs, Shakespeare’s King Lear quote “we will all laugh at gilded butterflies”, comes to mind for Olivia’s look. Described by the house as “inspired by the Gilded Age’s reflection of opulence”, the dress is made entirely from hand-embroidered metal crystal mesh, hoping to emphasise “the era’s attention to enhancing the female form”. The hair is Ophelia-esque, and overall the look feels very much in-line with the artist’s established love for 2000’s fashion, alongside classical references.

No Met Gala round-up is complete without some Kardashian-Jenners, and whilst the clan produced some mixed looks this year, the swirling rumours of Kim K’s dress choice turned out to be true. She appeared on the red carpet wearing a crystal-embellished gown last worn by Marilyn Monroe six decades ago when she serenaded the US president John F Kennedy for his birthday. Bleaching her hair and losing weight to fit the multi-million-pound dress, the sheer piece sold in 2016 for nearly $5M and holds the record for the most expensive dress sold at auction. Part of Ripley’s Believe It Or Not Collection, despite online discussions of alteration, Ripley’s explicitly explain how “no alterations were to be made to the dress and Kim even changed into a replica after the red carpet.”

A further cry from the historic references of the likes of Billie Eilish, Gigi Hadid wore a custom puffer coat worn over a corset catsuit. Whilst onlookers may be quick to describe the design as not fitting the theme, Versace explained the getup as “a modern interpretation of coats from the late 1800s and a refresh of the Dolman silhouette for a new age of glamour […] inspired by the volume and dramatic change in womenswear silhouettes of late 1800s”.

Whilst her husband did not make an appearance this year, Hailey Bieber showed us how easily she can nail a classic look. Whilst some were questioning why Marilyn Monroe was emulated so much within a theme decades before her birth, there was a sense of all-American glamour that certainly worked. Stylist Karla Welch explained the gown as “inspired by Jerry Hall and an amazing passage about a young Vanderbilt in the Gilded Age descending the stairs in white silk and feathers”. The original 2002 reference worn by Jerry Hall can be seen here.

Another one of the better dressed Kardashian-Jenners, (keep reading for Kylie’s questionable accessory choices) the standout from Kendall’s Prada ballgown was her eyebrows, or rather her lack thereof. Hitting all three of this year’s Met trends by being black, floor-length, and sheer, the dress includes a custom black tulle top with a net embroidered overlay and a double silk satin skirt with hand-pleated ruching details. The event is the place for experimentation and the editorial glam certainly made the overall effect more interesting.

At an event where the male fashion did slightly disappoint, Stormzy took the opportunity to shift away from his usual all-black fits. Kitted out in ecclesiastical Burberry, he wore a custom white wool cape and three-piece tuxedo with satin lapels and patent leather shoes. Speaking to GQ about the look, Stormzy, stylist Melissa Holdbrook-Akposoe, and Riccardo Tisci took the white-tie dress code literally. Holdbrook-Akposoe explained, “We all came together to ensure that we created something that gave a nod to the historic Burberry brand and the Met Gala theme, whilst also keeping Stormzy’s personal style and comfort in mind”.

Wrapping up with one of the most talked-about looks of the evening, Kylie Jenner’s Off-White dress has received a mostly negative reception. The so-termed “POETRY DRESS®”, features a handmade bustier and ruffled organza skirt, but the most controversial element of the outfit was the veiled “THINKING CAP”. Whilst this wedding dress-esque outfit certainly was not my favourite, the look draws inspiration from the final Couture gown designed by the late-Virgil Abloh. Kylie took to Instagram to explain that she was supposed to attend the Met with Virgil before it was postponed in 2020. She continued “to celebrate V tonight and his incredible legacy truly means the world to me. i’m humbled to wear this dress and honor my talented beautiful friend. we felt you tonight Virgil and love you forever”. 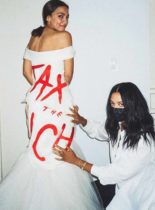 As stars interpret this year’s Met Gala theme ‘In America: A Lexicon of Fashion’, take a look at the event's best fashion moments.