It has become widely accepted that contestants now enter Love Island for one reason and one reason alone: brand deals.

What began as a sincere, messy, yet altogether charming take on a dating show quickly spun into million-pound sponsorships and exclusive partnerships that almost guaranteed any Love-Islander a pay check for life – almost all of which were provided by fast fashion giants. However, the show’s true commitment to promoting fast fashion began when Manchester-based retailer I Saw It First initially coupled up with the show in 2019. This affiliation saw the brand provide a full new wardrobe for each of the female contestants on the show, which viewers were then encouraged to purchase directly through the Love Island app. Before long, fast fashion had become the benchmark of Love Island’s aesthetic, and consumers were quick to keep up.

But despite I Saw It First growing monthly sales by 67 per cent and securing over a quarter of a million new customers thanks to the show, it did not take too long for slow fashion advocates to begin criticising Love Island’s flippant approach to overconsumption. Earlier this year, ex-Islander Brett Staniland protested against fellow contestant Molly-Mae Hague’s Pretty Little Thing collection on the grounds of the company’s unethical practises – a move that gained a significant amount of media attention and led to many Love Island fans re-considering the companies they had been supporting.

Whilst this move signifies a huge shift in the UK’s attitude towards fast fashion, has the change come all too late? The seed that Love Island planted when it began championing fast fashion grew exorbitantly quickly, and the habits of consumers have now become cemented. Fast fashion giant Shein has become the third most valuable start-up in the world with a valuation of $100 billion, and UK-based ASOS, which has worked with several Love Islanders in the past, saw profits of over £1.6 billion last year. Low prices and speedy delivery times went hand-in-hand with expertly crafted promotion by reality stars on our TV screens and social media platforms – a strategy that saw revenue soar as intended but did long-lasting damage to consumer habits.

Arguably the biggest challenge in Love Island ditching fast fashion for good comes not whilst they are on-air, but after the show ends. Small, sustainable brands and second-hand marketplaces do not have the hefty budgets for partnerships that ex-Islanders have become accustomed to, meaning it is likely that many will continue to accept sponsorships from the likes of Boohoo and Missguided to keep money coming in. Moreover, the show will need to have more contestants who are sustainably minded, as Staniland was, in order to drive their sustainability message home.

But whether Love Island is intending to create a slow fashion revolution, or simply be more mindful of its impact on consumers, a focus on second-hand clothing is an undeniably big leap that not many people saw coming. Whilst it may take several seasons of a sustainable show to undo the years of fast fashion indoctrination, this is a sure sign of a move towards a more fashion-conscious future. 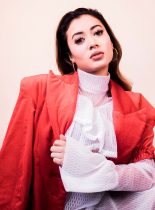 The Love Island export on working with Stormzy and Zayn Malik.