We are introduced to Neve Kelly, Clara Rugaard’s character in new show ‘The Rising’, as she emerges from the waters of a lake, covered in bruises with no memory of how she got there. After the initial fog of confusion clears and the introductory episode continues, it becomes evident that Neve, has in fact, been murdered.

At this moment, Sky’s latest dramatic offering begins the subversion of audience expectations key to the series overall. As the show’s protagonist, Neve is determined to take matters into her own hands by investigating her deathly fate. This narrative thread is unusual, as Rugaard expresses in our discussion – especially within the crime-thriller genre, an audience expects to watch a usually “male cop uncover the mystery of a women’s murder”. Alongside Neve’s mystery-solving narrative, ‘The Rising’ depicts the intensity of complex relationships, with rumours flying of Neve’s death in a tight-knit rural community setting. The writing was inspired by Belgian supernatural crime thriller ‘Hotel Beau Sejour’, and although filmed in the Lake District, the tone is not far from European and Scandi dramas finding huge success in recent years.

Thinking about Clara Rugaard’s character, she is presented as complex: Neve is a motocross rider, bold, and fearless, while navigating the emotional dynamics of her new dead/undead situation. Talking to Rugaard, I am interested to uncover the extent of the intersection between her personality and her latest character’s, as well as what drew her to the role. Her previous acting credits have included starring alongside Hilary Swank in acclaimed sci-fi film ‘I Am Mother’, and she is a keen musician. A rather surprising career detail even includes the voicing of Denmark’s version of Disney’s ‘Moana’. We sit down and discuss when Rugaard is pushed out of her comfort zone, how music helps her unwind, and run through all things ‘The Rising’. 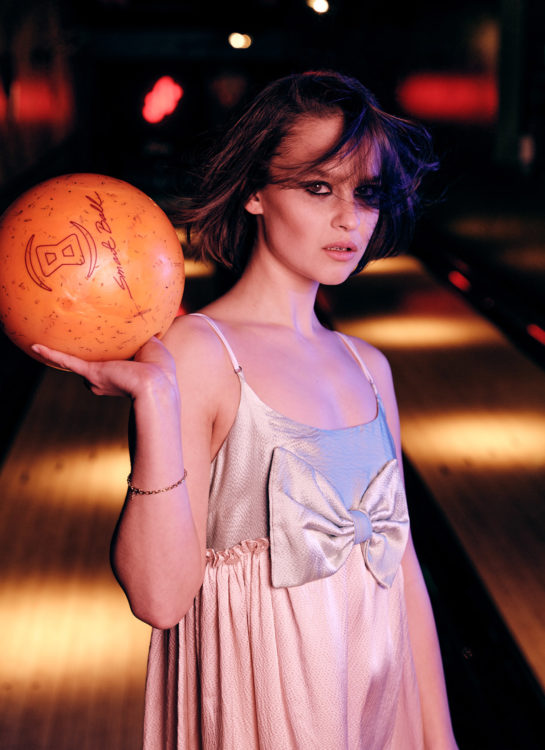 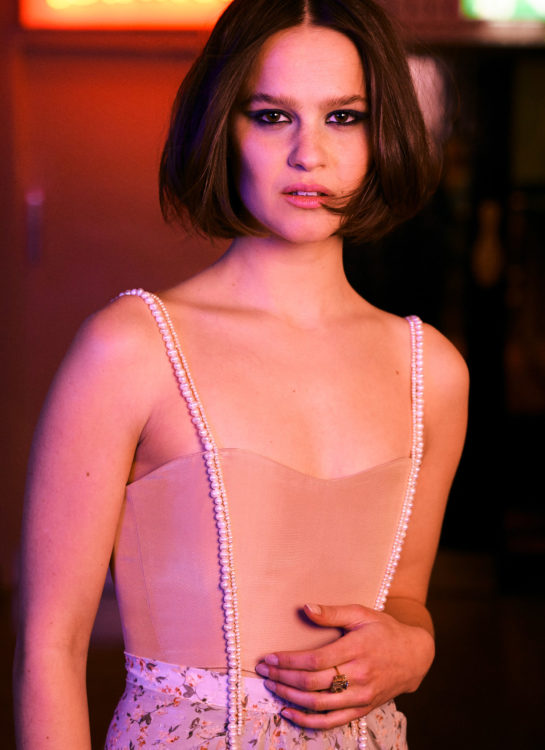 We’re here to talk about the new series ‘The Rising’ for Sky. I would probably describe the series as a crime drama murder mystery, with a twist. How would you describe it?

I think that’s pretty much the nail on the head. It’s a crime drama with a supernatural twist, and a high concept show. It’s super dynamic and very fast paced with loads of different, complex characters. It’s also a show about love and loss, and family, and coming of age. There’s something for everyone.

You play the lead role of Neve Kelly, could you introduce Neve and tell me a bit about her?

We find her in the beginning, and she soon discovers that she’s dead. Neve grew up in this rural community, quite a big fish in a small pond, which she found terrifying. She always wanted to break to break free of that cycle and place. The setting of the tightly knit community is interesting, because there’s so many secrets, and everyone knows everything about everyone. She’s also motocross rider.

Overall, I think Neve is one of the most complex, tangible, raw and real characters I’ve ever seen on page. You can see that she’s insecure, but she’s also super confident. She’s resilient and determined, but also at a confusing age where she’s trying to figure out who she is and where she belongs. I thought that was very easy to connect to, and could relate, and I think most people can.

Was the complexity of her character something that drew you to the role?

Totally. I think all the characters are really complex, but Neve especially. It’s quite hard to not empathise with a character that’s fleshed out to the extent, because you can really understand her flaws. It’s never black and white.

Neve seems fearless and is definitely not afraid to take risks – how does this part of her personality compare to yours?

Neve is undoubtedly so much cooler than I am. I’m definitely not fearless. But I love that I can convince people that I might be when by diving into characters like her. The thing I think we connect on the most is our competitive spirits, but also that belonging is a massive thing for her. I think that’s relatable for anyone at some point in their lives. Being in a small, tight-knit community exacerbates that feeling of needing to belong, whilst not having people to connect to. I try and push myself, and I think this industry does that for you. But as an actor I try and gather my comforts around me when I’m not working.

In terms of those comforts, do you have a way of switching off or unwinding?

For ‘The Rising’ it was quite an intense shoot, and there was very little downtime. Separating Clara from Neve was hard, and that line was blurry, because you don’t really have time to set those boundaries. There are things like, wearing a perfume that’s Neve’s specifically or having a tea when you get home! Small little things can help you step away from your character when you’re done on set. 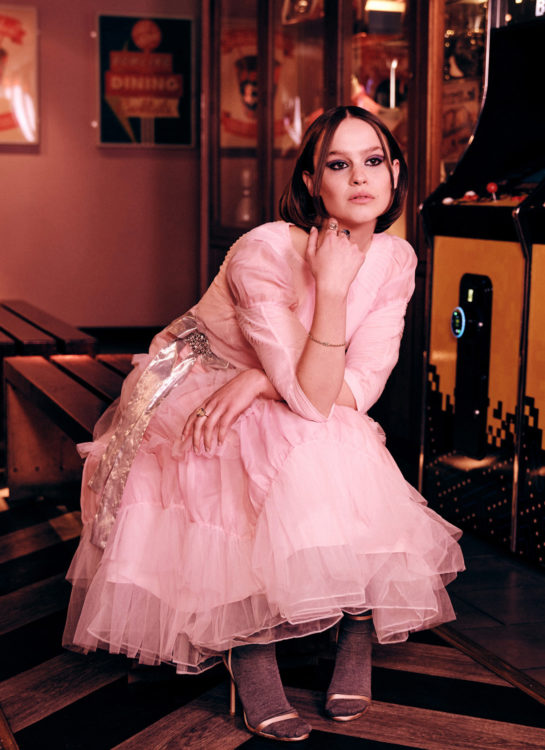 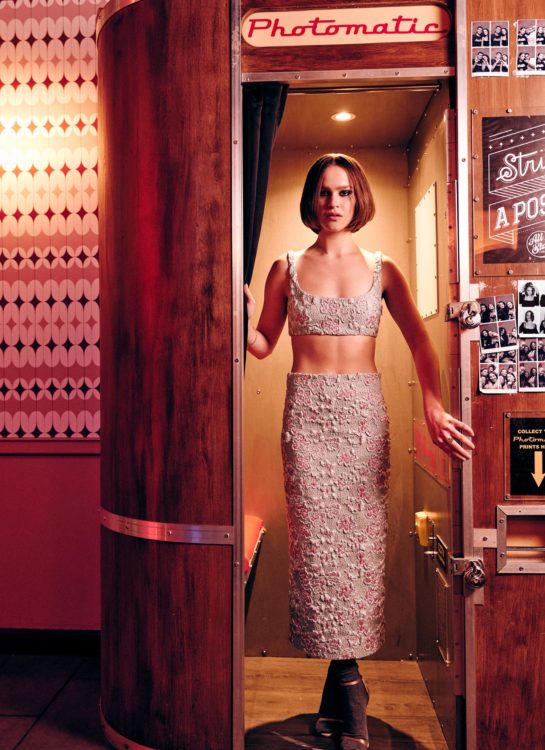 Where was the set and what as the filming experience like?

We shot in the North of England in the Lake District area primarily, which is so beautiful. It also meant that we had to deal all the natural elements quite a bit, which was probably one of the biggest challenges. I mean, we were just, you know, we were shooting on cliffs as well. There was quite a lot of farm animal noise, or all of a sudden there would be a massive storm. We were based out of Manchester for six months and I’ve come away with some very dear friends.

The Rising is inspired by a Belgium crime thriller, did you watch any of the original series or did you stick with your own interpretation?

I didn’t watch it because I wanted to stick to my own interpretation. And I knew that director did put like a big emphasis on it being a different show. The concept is same, but I didn’t want to get too influenced. I definitely think I should watch it now though.

When you’re picking projects in general, do you have a certain criteria, or is there anything that makes want to do one project over another?

I think with something like this, you know pretty quickly when you’re reading a script whether you care or not – about the characters, the people, the environment, and the universe. I was pretty instantaneous for me with Neve, I instantly felt a connection to her and empathised with her. I also thought it was it was amazing to have the opportunity to tell this sort of unique reimagined story of a dead girl that we’ve seen a million times before.

We’ve seen so many crime stories about ‘the girl who gets murdered’ and it’s typically a male cop who uncovers the whole mystery and figures out who done it. But this time, it’s through the victim’s eyes, and she’s empowered to decide her own fate, which I thought was incredibly an incredibly powerful message.

So I know you’re a singer as well as an actor – what do you think Clara’s music taste would be and how does it compare to yours? I get indie rock vibes from her…

And does music play a role for you on set?

Music would help me get into the zone. I create playlists for my characters as well. This time around the director and I had many conversations about the tone of the story and Neve as a character and fleshing her out. He was very particular about the style of music that the show was going to have, and that Neve would listen to. A lot of CamelPhat and Bicep.

It was so much fun to do and obviously getting to be Disney princess is a dream. I’m proud of that and it was fun to be able to see that whole universe. You do the dubbing before all the animation is fully done, so you get to witness the process of how these Disney Animations are put together and they’re just I love the story. I think she’s such a cool princess.

If you weren’t acting – is there any other career you could imagine yourself in?

I think I’d probably still be in the arts. I actually wanted to be a singer before going into acting. Music is what I would imagine. I try to write [music] now it’s become my thing that I do when I’m not working. Actors live in such extremes: you’re intensely working for two months and it’s very intense, and then nothing – you’re fluctuating constantly. I think it’s important to find the middle ground and a balance. Having a purpose or another hobby is really helpful tool.

Are there any roles you’re desperate to play, or a genre you’d like to get into?

I’d like to do a comedy, or something light-hearted after the darkness of The Rising. Or I’d love to play a villain.

What are you looking forward to the rest of this year?

I’ve got a few things in my pipeline that are waiting to be set in stone but I am feeling very excited about this year. I’m excited for The Rising to come out, for everyone to see it.

All episodes of The Rising are on Sky Max and streaming service NOW from 22 April.