If you were to arrest Elliot Edusah for a crime, it would likely be for his scene-stealing tendencies. In the six years since his first major acting gig, the London-born performer has anchored himself as one of Britain’s most prominent rising stars. So far, Edusah has graced our screens in BBC’s acclaimed anthology series ‘Small Axe’, the shrapnel-filled war epic ‘1917’, the emotion-driven drama flick ‘The Habit of Beauty’ and now the Reggie Yates-directed love letter to UK garage ‘Pirates’.

From glancing at his acclimated film ledger, it’s clear the Stratford native values rich, weighty narratives and gripping stories regardless of genre. ‘Pirates’ is no exception, spearheaded by the mind of the actor, radio disc jockey, and television personality-turned director Reggie Yates, ‘Pirates’ joins the long list of quintessential Black British tales immortalised in film form. 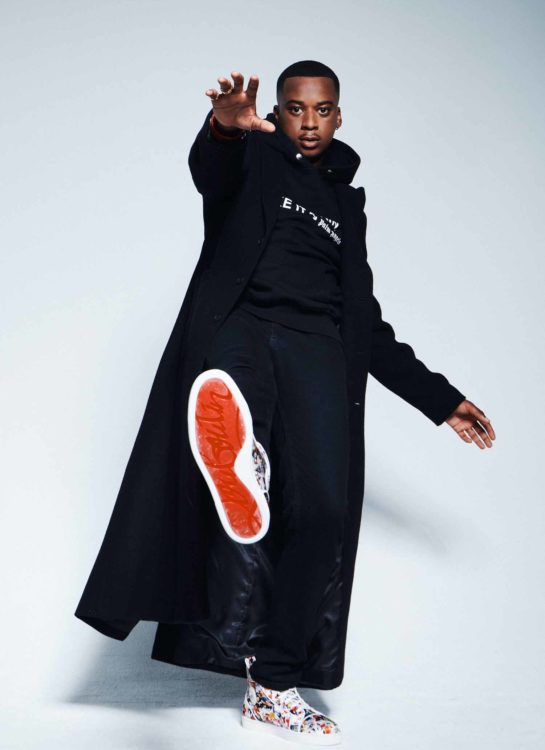 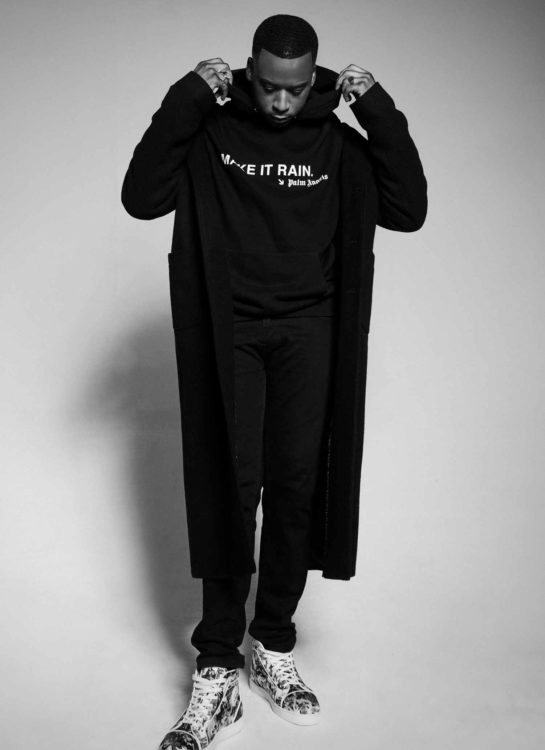 Like ‘KiDULTHOOD’ and ‘Bullet Boy’ before it, ‘Pirates’ is a product of its time, residing in a flip-phone dialling, VCR-using void, inviting viewers to hop in a time machine back to London, 1999 at the summit of UK garage fever and the start of the pirate radio revolution.

Assuming the role of Cappo, Edusah immerses us in a bygone era by retelling the story of how pirate radio remodelled the Black music sphere. The movie reminds us of how pirate radio offered a safe outlet for several pioneering audio marauders – like Rinse and Deja Vu FM – who helped transform UK rap into a multi-million-pound industry.

As ‘Pirates’ makes its way to the silver screen, we chopped it up with Elliot Edusah to discuss his love for the Black British music scene, his trials and tribulations as an actor, and the state of Black men’s perception in the movie world. 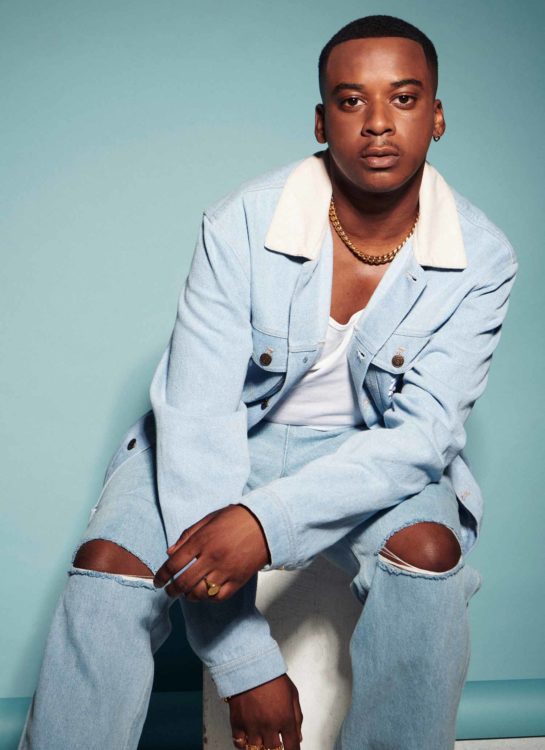 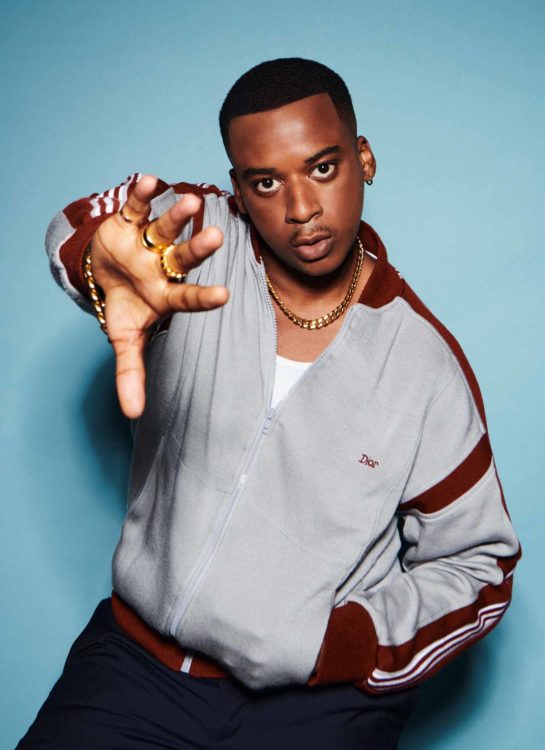 So, Elliot, congrats on ‘Pirates’. The movie is a living, breathing time capsule for its era and Black British culture at large.

Do you have any childhood memories of UK garage or the then-emerging grime scene?

Yeah, for sure, garage has always been a part of my life. I grew up with my dad bumping Craig David. Every young kid wanted to be like Craig David and the So Solid Crew. So Solid’s “21 Seconds” was massive, as well as people like Ms. Dynamite and Sweet Female Attitude. All of my older siblings loved garage, but I also saw that emergence of grime as UKG began to shift into an entirely new entity. I think grime was my era because I saw the Wileys and the Dizzee Rascals as a kid. Being an East London boy, I’m from Stratford in Newham, which is like the home of grime. That’s where the N.A.S.T.Y. Crew are from as well as MCs like Jammer, D Double E, Kano, and Ghetts, too. The list is endless, there’s so much talent that comes out of Newham.

Grime was a part of my generation, but I experienced garage too. It’s always been the soundtrack of my childhood. Whenever I hear garage songs song and I’m like, oh, this throws me back to the family barbecues when I was a real little kid and just everyone playing it. My parents were younger at that time, and they would play a lot of the garage music at the time. They were really tapped in.

I’ve got a real quick game. We’re going to travel back about two decades: You walk into your local HMV, you’ve got £5, and you can only buy one CD single. What are you picking?

Shit man! you’ve proper jammed me up there [laughs]. “Re-Rewind” is just my childhood captured in a song. My dad used to play that all the time, it’s legendary. I feel like I’ll be doing a disservice not picking that song, but I love “Has It Come to This?” It’s so specific even the album’ Original Pirated Material’, that’s my soundtrack. That song expresses pirates to me. So, I think I have to pick ‘Has It Come to This?’ by The Streets, even though “Re-Rewind” is so special to me. No, you know what? “Re-Rewind” It has to be!

After watching ‘Pirates’, is there anything you want people to take away from the film?

Throughout the film, you can see Cappo struggles with opening up and being transparent with his friends. I think many men struggle with opening up, being vulnerable, and being honest with their loved ones. Hopefully, young men can watch it and really relate to it and see the result of what happens when you bring feelings to the surface. Sometimes, they can ruin a friendship. Other times they can make them stronger.

I want men to feel like they can cry in front of their friends and be honest and vulnerable too. I think that’s what I want people to take from Cappo’s character. Also, I want people to enjoy themselves and watch the film and have a great time, you know? After this tough year with COVID-19, there’s been a lot of sadness and gloom for the past 18-24 months. I want people to sit down, relax and laugh, and it’s the best way to finish the year. This film is the best way to end it. 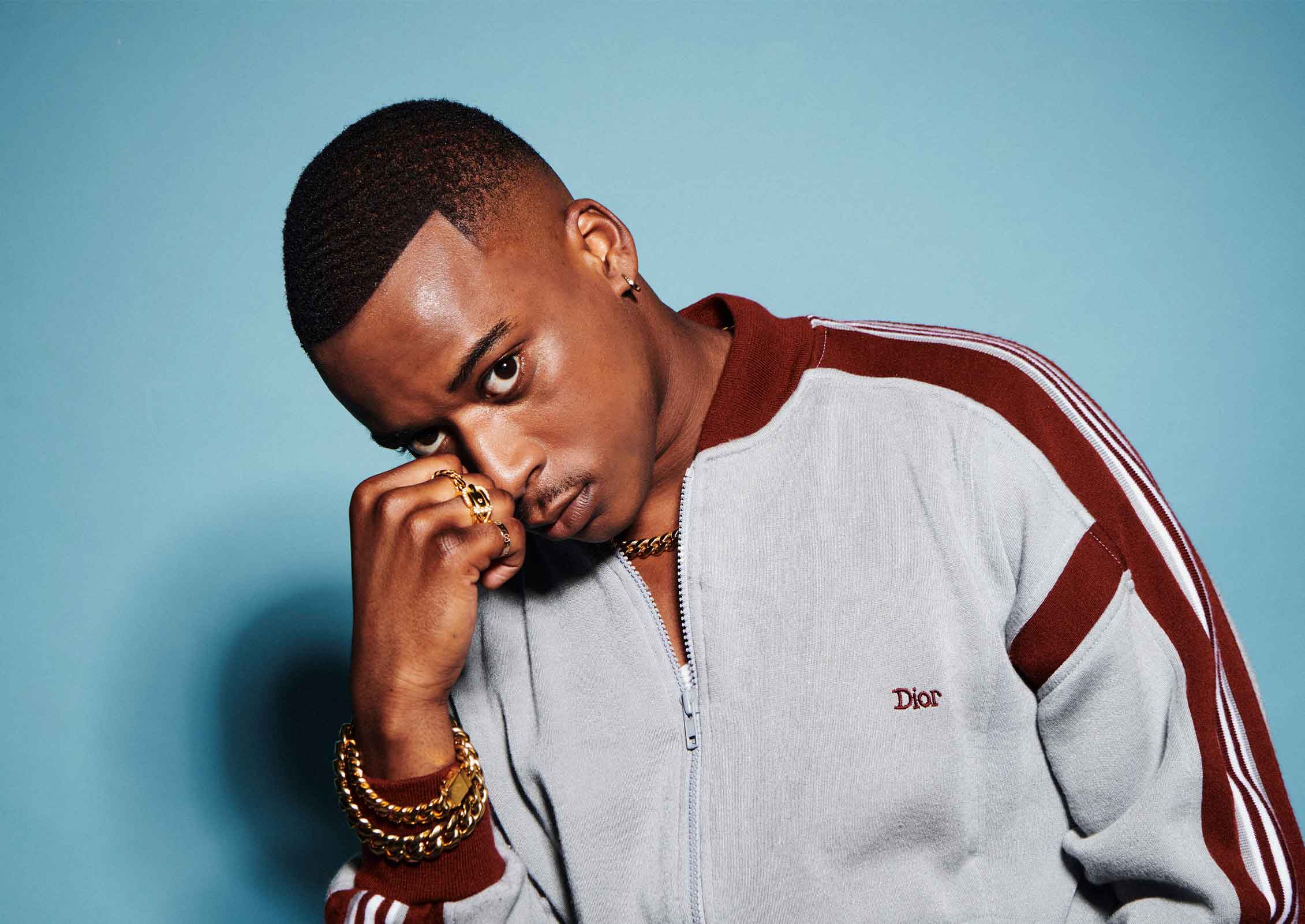 What attracted you to the movie ‘Pirates’? Do you see any parallels between your character Cappo and yourself?

Do you know what’s funny? I actually auditioned for the role of Kidda, but then Reggie [Yates] was like told me it wasn’t the right fit for me. Reggie told me to try out for the role of Cappo, but I was kinda apprehensive at first. In an audition, you kind of use the preliminary round to sort of prepare as much as you can. The director maneuvers you around and tells you what they like and don’t like.

With the second audition, I went in blind. I had no idea how the chemistry would materialise will my co-stars. To my surprise, Reggie picked me for Cappo, and he told me I was perfect for this role. With that in mind, I told myself to bring my own essence to the character and make everything as natural and smooth as possible. Fortunately, everything worked out, and I had chemistry with the boys. I went to school with Jordan Peters and Reda Elazouar and I shot ‘Outside the Wire’ on Netflix six months earlier. So, once I saw them both in the room, it was just like bang, here we go.

Is there anything you learned from Reggie Yates working on ‘Pirates’?

Reggie is one of those figures I grew up watching, and I was inspired by watching a young Black man on TV killing it. You know what? I didn’t think he was a director until recently. I looked back at his work and his short films and everything he was in doing, but just growing up, I just always wanted to meet him and chat with him. To work with him every day on set, I learned from him, and he taught me so much stuff. I see him as more as a brother figure now.

You also worked with award-winning Black British director Steve McQueen on ‘Small Axe’. What was that experience like?

What I learned from Steve McQueen is the art of saving the mistakes for the camera. Don’t over-prepare because there’s an authenticity and a spark that happens when you mess up a line, or if you get something again, you have to really work for it.

So don’t over-prepare. Just do enough to feel comfortable, and let the scene come alive. That’s a big thing I learned from Steve, and I took that on to ‘Pirates’. I just learned to trust myself, trust the director and trust the director’s vision. 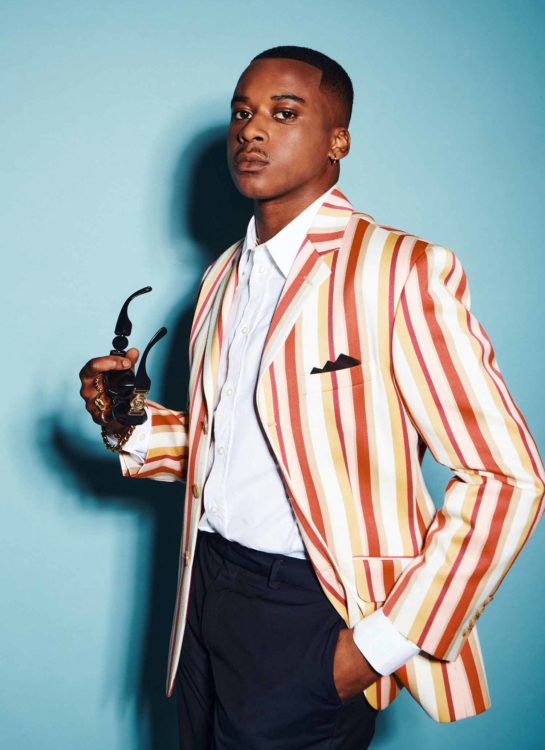 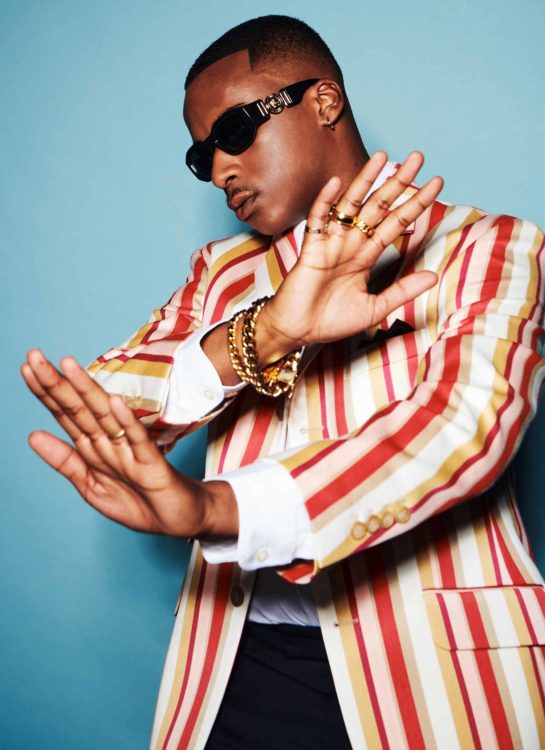 What kind of legacy do you think ‘Pirates’ will have?

I think we captured a time period that’s never been touched before, and such a legendary one at that. I believe the UK garage scene is so essential and woven into Black British culture. If it weren’t for garage, there would be no such thing as grime.

I think the movie is a story that needs to be told, and we’re the first ones to do it. There’s merit in that. I think it’s always going to be memorable that we bought this to the big screen first. Seeing three boys of African and Caribbean origin from a housing estate really pushing the culture forward is essential too – we’re not just the typical Black boys depicted on screen.

I think it’s important to illustrate that we’re cool, but we’re not too cool. We’re pretty nerdy. We often forget about those kinds of boys in London because we want to see the danger and trauma in shows like ‘Top Boy’. I love those projects because I can relate to them in my way. At the same time, we need to show a bit more dimension to the Black community because there are so many different versions of us. We’re not all the same. Everyone has a friend like Cappo, Kidda, or Two Tonne, you know?

I agree with you! Black men are often portrayed in a stereotypical or monolithic light throughout movies and TV.

Sometimes I feel like we’re over-emasculated, and it gives us a chip on our shoulder where we feel like we can’t open up. As Black men, we need to work on expressing ourselves better. In film and TV, Black men are painted in a monolithic manner. You’re either the “tough guy” or wisecracking confident guy, and I just wanted to help challenge that idea a bit. We’re resilient – we are, as a collective – but we have our sensitive moments too.

What can we expect from you heading into 2022?

So, I’m really excited about my new series called Django, it stars Matthias Schoenaerts, Noomi Rapace and Nicholas Pinnock. I’ll be playing Nicholas Pinnock’s son Andrew Ellis. It’s a lot of fun. Django was produced by Sky and Cattleya as a joint venture, and it’ll be out at some point next year. I always wanted to be a part of a western, and I think this show is fantastic, you’ll love it.

‘Pirates’ is in theatres now.

Watch the trailer for 'Pirates' below: