FAANGS Invites Us Into Her Dark and Twisted Paradise

Canadian-born dark-pop veteran, FAANGS, lets Notion into her intriguing world, spilling on her latest project, 'Teeth Out', what it was like to grow up in the industry, and the strangest place she finds inspiration.

FAANGS – formerly known as Charlie – has been in the industry a long time. Starting her musical journey when she won Canada’s The Next Star competition at only 12 years old, she always knew a place in the spotlight was her destiny. 10 years later, it’s all paying off. She is turning heads with her steely take on alt-pop, upending the genre by incorporating trap beats and flexing with a rock star sensibility.

While she shimmers with star quality, no one can say the journey was easy: having spent over 200 days in the studio last year, FAANGS’ work ethic is second to none. After the success of her single “I Don’t Care” she unveils the rest of her 13-track project ‘Teeth Out‘, a body of work representing the highs and lows that come with creation. ‘Teeth Out’ is a project that merges all the rough edges of hip-hop, alt-pop and rock into a glimmering opus that is a testament to FAANG’s graft.

Elaborating on the project, FAANGS says, ‘This project is a combination of two things. I’m saying “Don’t fuck with me,” and at the same time, I’m telling you “I’m fucked up in a broken way.” Those are the two walls I had to put up, and takedown, to create the world I wanted to make. There are so many days when you doubt yourself, you want to give up – but then you strut into a club and get your shit going. We all have both of those things in us, and I’m all about that juxtaposition.’

FAANGS chats to Notion about ‘Teeth Out’, the meaning behind her name and what’s next for the enigmatic pop star. 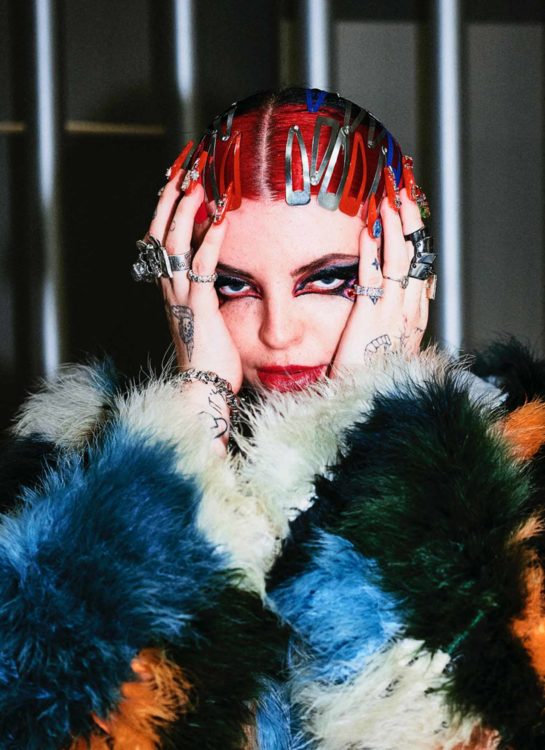 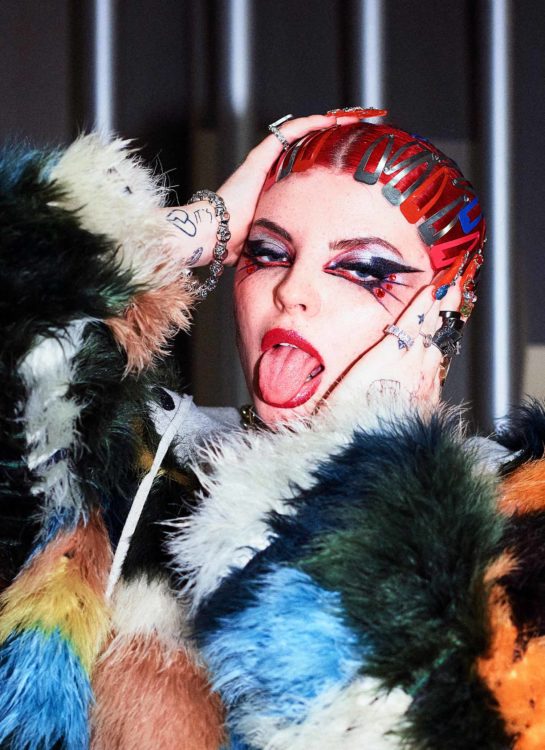 Congratulations on your new project ‘Teeth Out‘! Can you tell us a bit more about it? What was the creative process behind it and what’s the project’s overarching message?

Thank you so much! I’m genuinely pinching myself right now – I can’t even believe my project is out! Wtf!! ‘Teeth Out’ is the musical narration of the struggles, extreme highs/lows, and major emotions I went through while creating this project. It expresses the savage-push-through mentality I grew to possess, in order to actually give life to the ideas in my head. No one believed in me at first. Many slammed doors in my face and told me I’d never be anything, that this project was a waste of time and energy. The more no’s I got, the more resilience that grew inside of me. I refused to take no for an answer. I knew what I was capable of. I wanted the world to hear my vision. The process of creating this mixtape was emotionally strenuous. There were more bad days than good, and a lot of depressing, anxious-ridden roller coaster rides. The only way I could express what I was going through was through my music. I spent over 200+ days in the studio last year, trying to vocalize what I was feeling. I am so extremely proud of this project, I can’t wait to welcome people into my dark and twisted paradise!

Are you able to choose a favourite track from ‘Teeth Out’?

Ooh! This is a tricky one. I honestly cannot pick a favorite, but I go through phases of what song I like more than the others. Right now, my favorite song is definitely “I’m A Little”, as it’s the most vulnerable I’ve been so far in my releases.

You’ve been in the industry for a long time. Can you tell us a bit about your musical journey and how you got to where you are today? How was it performing on Canadian talent show The Next Star at such a young age?

I feel so old at 22 years old. LOL. I’ve been in the industry now officially for 10 years! What the hell. Nearly all my adolescent years were spent in the industry. I never got to be a normal kid. All the way back to the Next Star days, I always knew who I wanted to be, WHAT I wanted to be. I learned the strongest of strong work ethic, I wouldn’t change anything about coming up in the industry at such a young age. I loved being on TV so young, it really lit a fire inside of me that made me realize I want to do this for the rest of my life!

Who were some of your musical influences growing up?

How would you describe your sound and how do you see it evolving in the future?

If you threw dark pop, high fashion, biting lyrics and a whole lot of attitude in a blender!!! 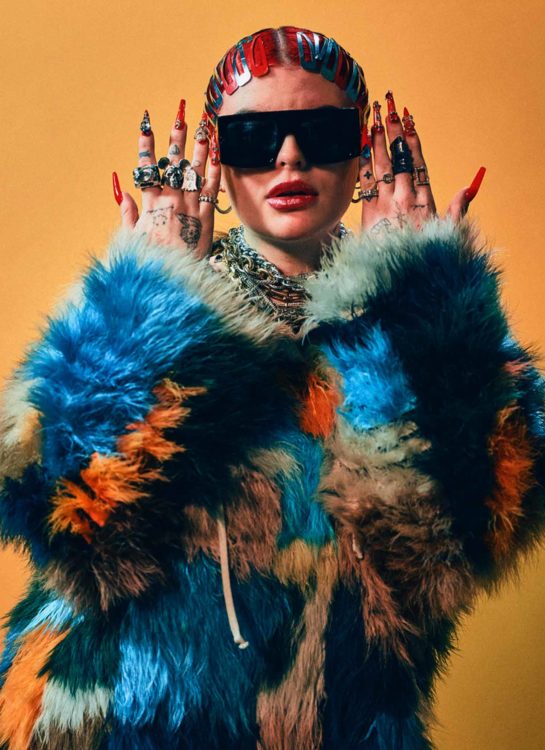 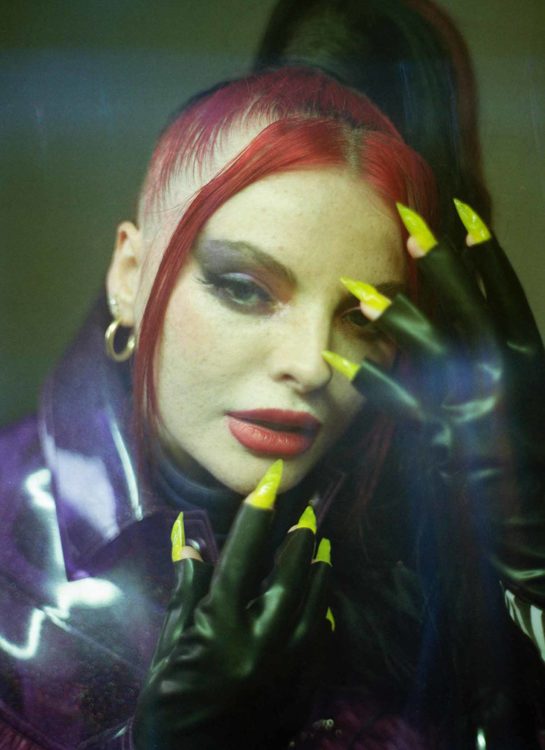 What’s the meaning behind the name FAANGS?

I actually got my name when I was 16. It was my first trip to LA. I felt overwhelmed as soon as I landed as I could feel the heaviness of the city. My friend messaged me and said ‘how do you like LA? Don’t you love it??’ I responded with ‘I don’t know what it is about this place, but I feel like it’s gonna chew me up and spit me out – with fangs not teeth.’ The rest is history!

Are there any artists you would love to collaborate with?

I’d love to collaborate with Frank Ocean. He’s a visionary. Or Post Malone. His melodies are OUT OF THIS WORLD.

What is the strangest place you have found inspiration?

I love this question. Definitely in my lowest of lows, I found the most striking inspiration. Sometimes the darkest of times make the most beautiful music.

Now that live performances are coming back, what can we expect from a FAANGS gig?

A WHOLE F*CKING SHOW!! PREPARE TO BE ENTERTAINED!

What’s next for FAANGS? What are some of your aspirations for the future?

After this project drops, I’m going to be touring and doing shows. Which is what I’m the most excited about. There will be a few more music videos dropping alongside the mixtape, and I’m hoping to build off of that and see where everything takes me!

Watch "DON'T BLAME ME" Below: