Fana Hues: “Life Inspires Me the Most”

LA singer-songwriter Fana Hues opens up about losing her voice when she was younger, and what the future holds.

After featuring on Tyler, The Creator’s “SWEET / I THOUGHT YOU WANTED TO DANCE”, Fana Hues has rightfully earned herself the title of rising star in her own right. Her recent single “Pieces” – her first solo song of 2021 – sees the young Pasadena-born musician detail the toils of a new situationship set in a cinematic, stylised video directed by Philip Youmans. For Fana, performing theatrically for her audience isn’t a far cry from her own theatre-filled youth. Her talents have led the multifaceted creative to take up acting roles, like her recent casting in a musical biographical exploration of Elvis Presley’s early days.

Following Fana’s 2020 project, the eponymously-titled ‘Hues’, new song “Wild Horses” continues to build her sonically soulful world, inspired by the power of Nina Simone, Dionne Warwick, Anita Baker, Beyoncé Knowles, and Mary J. Blige. But ‘Hues’ is also a nod to the way she intends to reflect “all the different shades of one idea”, referring to her genre-bending approach to R&B, forming her own discernible sonic blueprint rather than mimicking an established style (as well as acting as a reiteration of her family’s surname, Hughes).

Having just released another deliciously delicate yet deep single, we meet Fana as she readies herself for the year ahead. Hear about how she overcame the loss of her singing voice as a young girl due to illness, to what it was like to grow up in an overwhelmingly musical household, and what inspires her creative intentions. 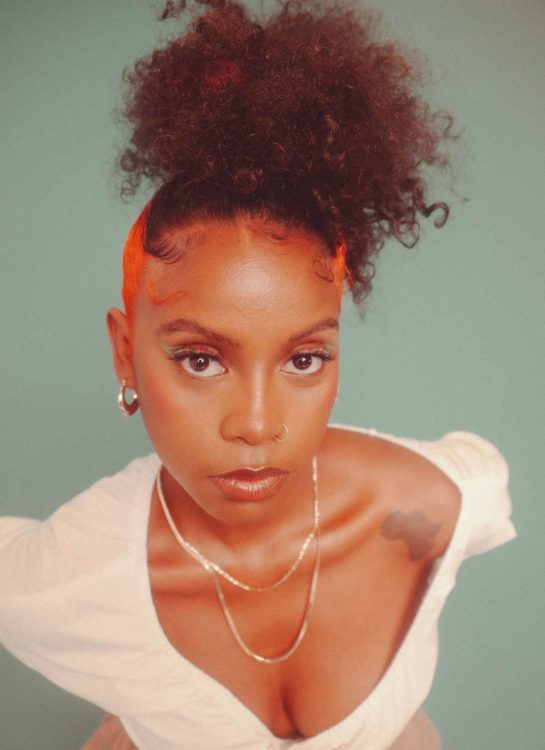 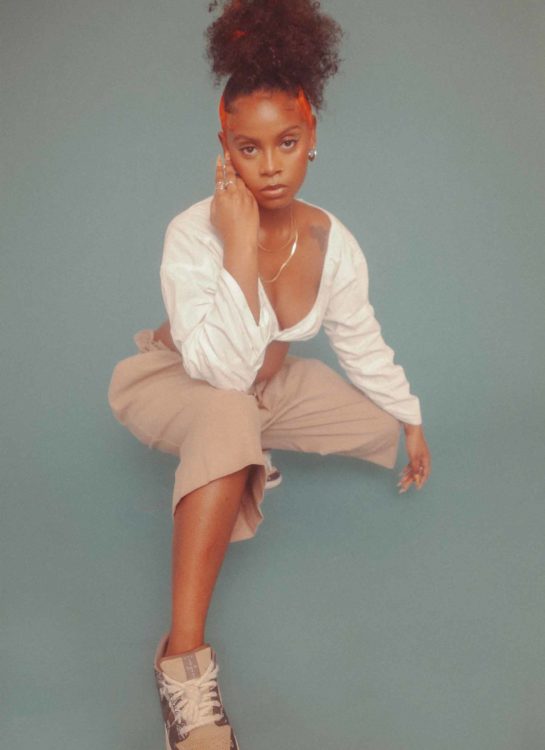 Introduce yourself to us.

My name is Fana Hues. I am 26 years old, and I’m from Pasadena, California. I started singing when I was two. My father was a musician – he still is a musician, a singer-songwriter. And my mother was a dancer. And I was in a band with my family when I was really young. We used to go around and sing in the African marketplace and at different school events. So that started my musical journey.

When I got a little older, I started playing violin and I played the violin for around eight years. And I played classical guitar for about four years. In school, at 16, I started writing poetry but I would kind of bullshit the poetry for writing classes, because it was just, you know, something easy to build up my portfolio for this class. And then I accidentally won an award for it. So I thought, I might be a little good at writing or putting words together.

There’s a lot of soul in your in your current style. Talk me through that.

A lot of soul, yeah. My dad is a funk guy, so he listens to a lot of funk artists. of James Brown, Prince… My mom loved neo-soul. Jill Scott, Angie Nolan, D’Angelo, and Lauryn Hill. I loved women with heavier voices because I thought I would have one. And so I always gravitated towards the Anita Bakers, Nina Simone, and Toni Braxtons. I feel like they hit you, the vibration of their voices just hits you in your chest differently. That was the music that served as the ingredients which made up my sonic blueprint.

Is that something that was frustrating for you, the fact that your voice wasn’t heavy like theirs was?

When I was younger, I lost my voice. I had all these terrible illnesses at one time: I had scarlet fever, strep throat, and tonsillitis. So I would lose my voice, I would just have a rasp, on and off for about four years. And from a very young age, I always knew I was going to be in music. So I thought, let’s make this work for me. Because I know that I can’t hit these super high notes, as my voice literally would sound like a cat screeching. But no, when I got older, it never bothered me that I didn’t have a heavier voice. Now, sometimes it does now, but that’s because, at 26, I’m at this point of being a vocalist where I want to be able to do everything. I’ve worked on my voice enough to where I can hit really high notes that I never thought I would be able to. But in developing that register, I lost some of my low ends.

“Breakfast” was produced last year, right? I know, it’s a very classic question, but I’ve got to ask it; what was last year like for you?

Very hard, I can’t even lie. It was really, really difficult. I started getting a lot of attention in the pandemic. Before the pandemic, no one knew who I was. So, once I started gaining some kind of traction, and people started knowing my name and producers started hitting me up, I had to ask myself; well, how do you catch a vibe with somebody? How do you create the synergy that is necessary in order to make music? How can you do that through Zoom? I bullshitted my way through so many zooms. Also because I was learning my process. Each process, each project is a different form of expression for me, even though the subject matter might be similar. Everything is always different. For me, nothing’s the same. I don’t have a setlist of things that I do to create a project. So in the pandemic, it was really, really difficult in the beginning to find a sense of identity in the music because I felt like I couldn’t be myself, you know?

Luckily, for “Breakfast”, I did do that session in person. It was when things started going slightly back to normal. That was the first song from my new project that I actually recorded. Granted, I do like to write my music by myself at home, but I do like to be there while the instrumental is being created. And I just wasn’t able to do that in a pandemic.

Musicians feed off of other people’s reactions – you instantly feed off of what your audience is telling you, or what people in the studio are listening to you. So it must’ve been incredibly difficult to understand your musical identity when you’re isolated.

Right. The way that I write, I have to pull from real life. And real life just was not happening. While I am grateful for having been able to connect with friends over the phone and FaceTime, I still am just a little bit more analog. I can’t feel through my computer and my phone the same way that I would if I’m in person. The vibrations just are not there. You know?

But I will say that having people sit down and be at home, I know that that’s why a lot of people were introduced to me. So for that much, I am grateful, because I know that people were looking for something and thankfully, they found me. People definitely hit me up saying, you helped me get through this pandemic. I think that’s insane.

What was your reason for making “Breakfast”? What are the lyrics saying?

At the time, I had just broken up with somebody. There was a sense of sadness but I also was very optimistic about what was to come. So when writing the initial: “I must have left my heart where my head is”, I was trying to express that because the person that I broke up with was extremely sad, I was heartbroken that he was heartbroken. But I was so ready to move on. So that’s really what the song was about. The lyrics feel a little melancholy because I’m reminiscing on what was and acknowledging that it’s over now. But the music gives me that sense of a fresh start, you know? 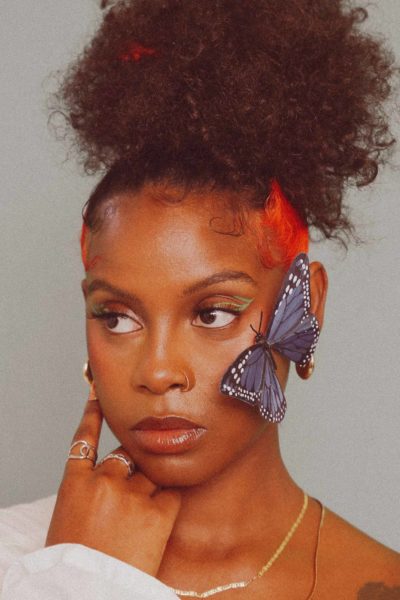 How does “Pieces” compare to “Breakfast” in your eyes? Did you approach the process differently?

I feel like I approached Pieces differently, yeah. “Pieces” was more in the moment. I had been playing around with some of the lyrics in “Breakfast” beforehand, so it was something that I was going through and understood. With Pieces, I was starting a new situationship and in starting that new situationship, I wasn’t being honest with myself about what it really was. So when we made the music for Pieces, I didn’t even know what I was writing about initially. The meaning revealed itself. I just opened my mouth and started singing and literally, the chorus just came out. And then I was like, “oh shit, I’m talking about this n*gga,” right? [Laughs] Those are my favourite ones, when the song reveals itself to me.

It sounds like “Pieces” was more of a puzzle piece, pardon the pun. It was waiting there for you to pick up the pieces of the song and put them together. And the video is beautiful.

Your style is very put together and your visuals are distinguishable as Fana Hues. Do you have a voice in your creative direction and your styling? And is that something you enjoy doing?

I had to get into creative direction and writing the treatments for my music videos out of necessity initially. With “Icarus”, my first single, as soon as I wrote the song, I saw the video immediately, so I wrote a treatment for it. My manager directed it, we did it very DIY. Because we didn’t have any support at that time. And then it became like really, really fun for me. The only music video that I did not write a treatment for is “Pieces”. I trusted my good friend, his name is Phillip Youmans.

He’s young, he’s from New Orleans, and I’ve always wanted to work with him. Then it happened. We were on a call and I had sent him the mood board and the music. I fully trusted him to do what needed to be done with these visuals because he understood what I wanted. We really wanted the music video to feel like it was a film and we wanted the music to feel like a film score because when I first started writing this new project, I wanted to do a project where I was just scoring a movie. It didn’t end up turning out that way. But that’s only because it’s not time for that yet, you know, and I am just not in the business of forcing things if it’s not working. But the fact that I did get to do that with Philip for “Pieces” was just the cherry on top; I got my little film.

And what is currently inspiring you?

I really just pull from life, life inspires me the most. The other day, I was watching a documentary on the mafia here and they were talking about how smooth one of these guys was, they said he just walked through the raindrops. I put it in a song. My plan was to initially write a whole song about somebody who is just so damn cool, so smooth he just seems like he’s walking on water. The way that inspiration pops up, sometimes it’ll be coming from the corniest places and you just make the coolest things.

What can we expect from you for the year to come?

This year, 2022, I have a project coming out in the next two months, I have a single dropping in a couple weeks, I’m going on tour…

…I know. I’m so excited. I’m already starting my next project, and I hope to book a role. I’ve been very selective with the roles that I’ve been auditioning for and I want to make sure they serve a purpose within the ecosystem that I’m creating as Fana Hues. Overall, this year, more music, more life!

Watch the music video for "Wild Horses" below: