Fender Musical Instruments Corporation, the company behind some of the snazziest guitars and basses available today, has announced the launch of a new programme aiming to propel the careers of independent artists after a year that has hit the music industry hard.

Bringing musicians back into the studio, eligible entrants for Player Plus Studio Sessions can win 10 hours of recording time at a professional studio, along with engineer support mixing and Player Plus gear. Also for the taking is a one-hour consultation with Ari Herstand, CEO of Ari’s Take and the latest model of the Fender® Player Plus guitar or bass.

Fender has reeled in some esteemed studios for participation, not least RAK Studios in London, Coastal Sound Recording Studio in Liverpool, Steelworks Studios in Sheffield, Chamber Studio in Edinburgh and Camden Recording Studios in Dublin. Further afield, in the States EastWest Studios and MDDN in Los Angeles, Flux Studios in New York, and Welcome to 1979 will be taking part. Studios elsewhere in Australia, Mexico and Japan have also been enlisted.

Wolf Alice’s Rowsell, a judge for the competition, has said: “Giving a platform to showcase independent artists is really important and I’m also excited to discover some new artists by being on the panel for the Player Plus Studio Sessions!”

Andy Mooney, CEO of Fender, added: “At Fender, we are dedicated to providing artists with the resources they need to fuel their creativity. Player Plus Studio Sessions: Powered by Fender® is the manifestation of Fender’s dedication to artists at every stage of their journey. The hope is this programme will jump start their artistic careers enabling them to fuel their passion to achieve their dreams.”

To enter, artists must submit a recent single, music video or live performance for consideration. The competition is open now and closes on 20th October.

Fender Next Announces 25 Artists As Class of 2022 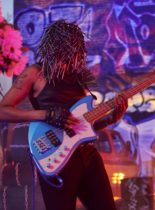 The Fender Next programme, providing vital support to rising artists, has announced its 2022 selection of 25 artists, which include Wet Leg and Self Esteem.