There are few people that can carry off neon green hair, but we predict a summer trend following Finnish pop star ALMA’s explosion into the charts. The 21-year-old started her career on the Finnish Idol series as a teenager, finishing fifth and working as a backup singer while she found her feet. She wasn’t meant to be supporting character though and after working on her own material was signed to Universal. Last year saw the release of the ballsy breakup track ‘Karma’, the sweetest, most self-assured revenge track of the year, followed up by ‘Dye My Hair’, a tropical house house track that cuts through the Amazonian fog of the recent charts. We caught up with her while she was in town promoting her newest single ‘Chasing Highs’, a song that dissects the thrill of the party to find out more about Finland’s brightest young star.

Notion: How was the show last night?

ALMA: You know, it was amazing, I had so much fun, really it was one of the gigs so far. It was so crazy. The audience, at first I think they were like “She is so crazy, who are those guys?” but at the end of the show, they were like “she’s great”.

Was your sister on stage with you?

Yeah, she is travelling with me everywhere. She’s my backup singer also. It’s very helpful, and it’s also lovely to have your family with you travelling.

Have you always been a musical family?

Never. You know, my mom and my dad, they don’t know anything about music. I think I was the one who brought music to our family. We’re not a musical family.

But now you are.

When you were a teenager you were on the Idol series…

Yeah, when I was fifteen I went on there.

What have you been doing since?

I didn’t win that which was kind of a good thing I guess because it made me work way harder. I started doing some gigs with a female rapper [Sini Sabotage] from Finland, and then I was working in the studio all the time, like ‘I need to make songs’, I was doing gigs with the rapper, trying to make better songs and finding my own style, my own voice and stuff like that. It took me a couple of years to find what I wanted to do and then I started doing this properly and people started to like what I was doing and I got signed and now I’m here.

Was being a performer something you always wanted to do?

No! When I was younger, I was very scared. I wasn’t shy, but I was maybe anxious. My music teachers in school were always like “You need to perform, you need to sing in front of the class” and all the time I had an excuse, “I can’t, I have this or that”. I didn’t want to sing out loud, just sang to myself. When I got older I felt more power.

You have a bold fashion style, who would you say you were influenced by visually?

My sister, you know she always knows what to wear. I always steal her clothes, and I’m always buying what she’s buying. My mom, she’s not like fashionable anymore, but she knows what looks good on me, and [I’m influenced by] my friends and Instagram. When I have time, when I’m travelling around in a car or whatever, in a hotel room or whatever, I’m always on my phone and [I] Instagram cool people. 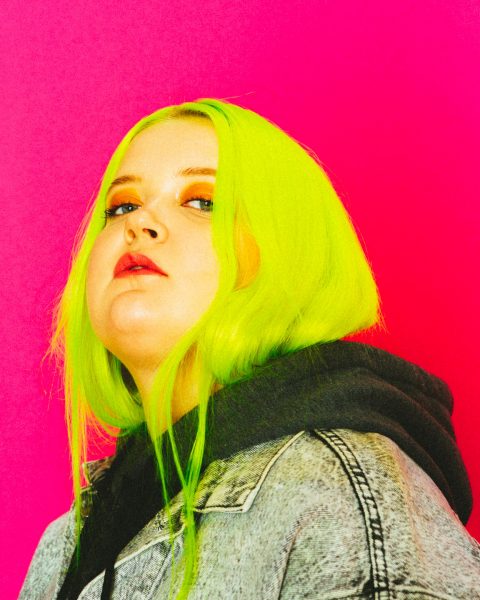 Your hair, let’s talk about your hair. I am a big fan.

Thank you. Again my sister dyed her hair that colour and I was like “Don’t do it, it’ll be horrible”, and then when she came out of the shower, and I was like “Oh my god, that’s amazing, I’m going to do it.” And then I did it; my sister is the fashionable one.

Are you guys twins?

Yeah, we are twin sisters.

Are you very in tune with each other?

Yeah, when we were kids we had the same friends and same interests, and I think we have always been best friends. We are very close, and it makes sense for us to work together because she’s a good DJ and great singer so why not? We hang together, we get the money, and we also get to have fun!

It is you know, it is. It’s a hard world out there, so it’s good to have the people you really really trust with you.

Going back to the Idol series, and when you said not winning affected you. What did that experience teach you about the music industry?

It made understand that if you want to go to the Idol series you have to know what you are doing. You have to have your own mind; how do I want to sound? What songs do I want to sing? I was fifteen; I didn’t know anything about anything. I was cute, but it taught me that I need to have a couple of years, go out, have fun with my friends, live life a little and then I can be ready for this world because you never understand what it takes to be an artist. Those Idol Series, Voice of Finland, they just show the good side, you get to sing with big, big crowds, people are saying good things about you but it’s way more than that. You need to do work. It took a couple of years to understand what it takes really.

What kind of music has shaped the music that you’re bringing out now?

I am taking influences from everything, when I was younger I was listening to Amy Winehouse, Fugees, Lauryn Hill, but very Finnish dark punk so I’ve been influenced by everything. My songs are definitely electro pop. When you see me live it’s like a punk show with pop music

Your new song is ‘Chasing Highs’, where were you when you were writing it?

I wrote that two years ago in Berlin, it was one of the first tracks I ever made in a proper studio session. I was 19 back then; I was partying at that time a lot. I was partying a bit too much, I was having that stage of my life and I just met someone in a club who was like “OK, I want to hang with you. Let’s not drink, let’s settle down”. It’s about that moment I see someone that makes me feel something special. When you’re in the club, and you’re like “woah, what’s going on here?”

Tell us about the music video.

We shot that music video in Las Vegas. You know I had my best friend and my sister with me, and they are in the video. It was me and my sister’s 21st birthday and you can see from the video that we had so much fun. It’s a documentary from our 21st birthday / ‘Chasing Highs’ music video. I was thinking, what is the place where you are chasing highs, and I don’t see any better place than Las Vegas.