Man-Made Sunshine, the project of Nothing But Thieves’ Conor Mason, talks trauma, inner growth and more to celebrate the release of his self-titled debut EP.

Man-Made Sunshine is the latest project of Nothing But Thieves frontman Conor Mason. Showcasing his flair for songwriting, the new moniker blends elements of alt-indie, psych-pop and electronica to experiment with a sound intrinsic to him. Developed during lockdown, which proved to be a creative time for many artists, Man-Made Sunshine sees Conor diverge from heavy guitars to make something far more soothing.

The change in creative direction results in a deep, debut body of work that is honest and expressive. Conor is unafraid to touch upon sensitive and important subject matters, like mental health and suicide, and he does so from a place of sincerity. Debut single “Life’s Gonna Kill You (If You Let It)” expresses raw emotion through psychedelically-tinged production and powerful soul-inflected vocals. Citing James Blake as inspiration comes as no surprise after listening to the track, but it also possesses shades of Thom Yorke and other genre-blending musicians, too.

The EP includes another four cuts, which intimately explore topics such as family relationships, acceptance and grief. “Brain in a jar” is a particularly potent moment, which looks at the artist’s experiences with growth throughout an incredibly successful career. Man-Made Sunshine is by no means a flash-in-the-pan project from Mason, who sees this as a wonderful beginning to a new path of personal creativity.

To coincide with the EP’s release, we spoke to Conor Mason about his experiences with trauma, inner growth and more.

Hey, how are you?

I’ve been asked this a lot in interviews recently, it’s lovely, I’m really well thank you. Currently staring out at some deer in the countryside. It’s not all doom and gloom.

Let’s start with your newly released self-titled debut EP, can you run me through some of its themes?

Yeah, the EP for me was used as vehicle of therapy and healing. I didn’t intend to do anything with it particularly, so I just decided to be as unabashedly honest as I could! I had a lot of different things floating about that were unresolved. I was dealing with grief, grief of a person and grief of my old self, which ultimately led to me uncorking my darkest emotions and learning to accept and heal them. A lot of self-discovery came with the writing of this EP.

How was the recording process? Has it been a long time in the making?

I like to write and record slowly. I wait until a lyric or melody hits me, jot it down and then contemplate it for a while then put it down. I’ve learnt to wait till it comes back to me, giving it space to brew on its own. It was the same thing with recording, I worked back and fourth with different producers, adding little bits here and there as I go. A lot of the original demos are in the final mixes, I felt those takes felt the most honest upon creating them for the first time. But I didn’t over do it or overcook it, I kinda let it breathe. As long as every second of the song went and ‘affected’ me the right way then I was happy using new or old stems.

You’ve just launched a new project called ‘Difficult Conversations With A Friend’ – so far you’ve spoken about two of your releases “Big” and “’Little Bird”. Can you talk to me a bit about what this series entails? And how you came up with it?

For sure, it was an idea I had whilst chatting with my mate Buster (who is the director and interviewer in the series). I just thought I know I’m gonna have to do a track by track at some point, it’s standard, but they’re always kinda rigid and cold. I thought wouldn’t it be more candid to just film the conversations I have with Buster and just be ugly, raw and honest with my answers, knowing how well he knows me. It was exciting to see how I would speak and what came out, ’cause we’re so comfortable in each other’s presence.

Alongside the recent launch of your debut EP, you’ve also shared a music video for your new single “Big” – it’s really fun, what was the creative direction you had in mind for this track?

Well the song is about my Dad – about him battling with depression and suicide. I wanted to have an uplifting video to juxtapose the lyrical content. Simply, I wanted to get a bunch of real fathers and sons in a room and get them to act out things, but in truth film the candid moments they didn’t really realise were being filmed. Some of the moments were so touching to me. You can’t act those bonds, whether they are super tight or super distant. Was especially special having a couple of friends in it with their dads/kids. 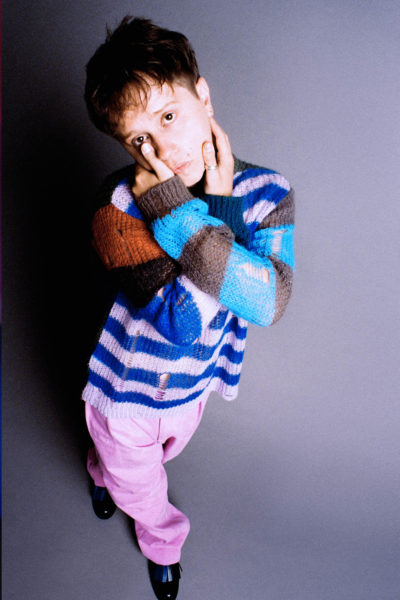 How would you best describe the musical soundscape of Man-Made Sunshine?

Honestly I couldn’t tell you. I just wrote from a melting pot of everything I love. I was heavily influenced by 90s R&B melodies, vintage hip-hop drumkits, Radiohead/James Blake pianos and chordal progressions, folk lyrical cadences. I guess whatever that is rolled up.

You’ve mentioned that Man-Made Sunshine is “about inner growth”. Having started this project in lockdown, how would you say you’ve grown since that period?

In a way where I’m just totally self-aware now, aware of the good and the bad. Sometimes that mirrored reflection is very hard to take, but once you do accept it and learn to live with it and love it or move on from it it’s such a profound skill to develop. At first I was like ‘fuck off’ I don’t want to see all of this, but now I love myself truly for all of me. Not just the idolised version of me.

Were there any rocky moments?

Yeah I mean, I wanted to kill myself. Just being honest. I was really broken from trauma and from reoccurring health issues that were absolutely pulling my life apart. I just didn’t know how to cope anymore. But I learnt.

Quintessentially known for fronting NBT, I wanted to ask how you separate these two projects.

I just love both projects. I love the community and friendship within NBT. It’s so much fun. The music we create is super exciting and we’re always trying to push alt rock, see where the hell it can go. But Man-Made Sunshine is a beautiful release for me. I like invasive lyrics and I can allow myself to have that space with this project.

Are there musical influences in particular that have helped shape this solo project?

What 2023 plans do you have for Man-Made Sunshine?

I’m figuring that out at the moment but looking to put some shows together and also always more writing!