We caught up with East London artist, Toby Corton, to find out when he's happiest, his go-to karaoke songs, plus the wildest thing that's happened to him lately. 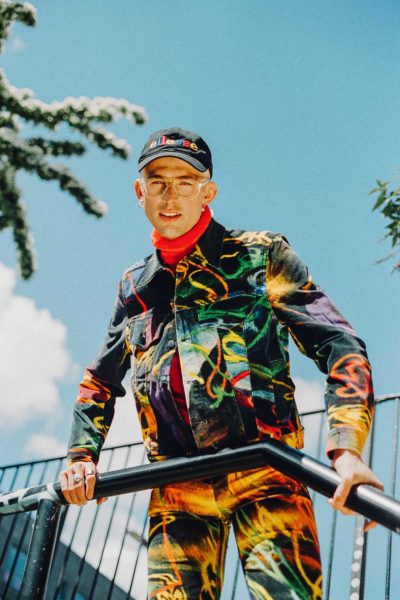 East-London based Toby Corton is an artist and creative who is making waves. His musical journey began in 2017, and where he begun playing gigs and festivals like El Dorado, and performing to anyone who’d listen. Whilst focussing on his music, he worked creatively alongside artists such as Bimini Bon Boulash and London Trans-Pride founder Lucia Blayke.

Jumping forward to this year, 2021 saw Toby release a series of singles and EP’s. His latest track “Guessing Games” was the final release of the year, and was a “personal musical milestone” for Toby. He describes writing the song 4 or 5 years ago, in a time of personal confusion. Its recent release comes to symbolise his remarkable musical journey.

We asked Toby some burning questions including when he’s happiest, his go-to karaoke songs, and the wildest thing that’s happened to him lately. Dive in!

Creative minds, living in London, Queer creative Charisma, Uniqueness Nerve and Talent (thats a 5-in-1) but I’m having it.

I’m expressing my creativity or chatting to my nan whilst sipping a shandy sitting on her sofa (if there’s a roast involved, that’s a bonus).

Who would you like to be stuck in a lift with?

My best-mates, on past experience I reckon we’d keep ourselves entertained.

Now, this is all audience dependent – Bing Bang Bong, by United King Dolls just won’t have the impact if its not a room full of queers. SO… If it’s a hip-hop karaoke situ, I’d probably bust out ‘All Falls Down’ by Kanye ft. Syleena Johnson or some Azealia Banks. But maybe for a universal anthem (its not just gay thing right?) Cher – Believe, never fails or Million Dollar Bill – Whitney.

What would be your death row meal?

The basic b* in me, wants to say spag bol. but for the elevation I’ll say cannelloni al ragu from E. Pellicci, in Bethnal Green, with chips and a spicy margarita on the side. Maybe the chips have parmesan and truffle on, after all, this is a serious matter, I am dying here.

Do you believe in aliens?

Charli XCX. My boyfriend submerged me in her music and I think she’s brilliant, cool AF and super creative.

I became a Guncle (gay-uncle). I’ve always been the gay bit but the uncle bit is new. That’s kind of mad to me, I’m completely besotted, but only via the medium of WhatsApp, because my older brother and sister-in-law live in Australia.

Notion cover? Who do we speak to about that? Otherwise, I’m just keeping on with the keep-on.