Gaspar Narby is all about challenging himself. Starting out as an electronica artist dabbling in off-kilter sounds, the artist has recently decided to take the bold leap into an entirely different kind of music – the introspective singer-songwriter mould.

Buoyed by praise for his first two efforts in this new era for him from music critics, Narby is cementing his arrival as a true singer-songwriter with the release of his ‘Magnet Letters’ EP. He put effort into making the title track a perfect encapsulation of his new sound, experimenting with unusual sonic touches and filming the music video in his childhood home of Jura in Switzerland.

Narby has worked hard on changing up his production approach for the new EP, bringing in collaborators like masterer Jeremy Cooper and director Lena Vallat, but also choosing to work on many of the new tracks solo, singing all the vocals on EP himself and writing most material on guitar before the rest of production. It’s an approach that’s sure to pay dividends.

Notion sat down with Narby to chat about the release of ‘Magnet Letters’, his exploration of male vulnerability and why his big changes in production felt right for this new batch of songs. 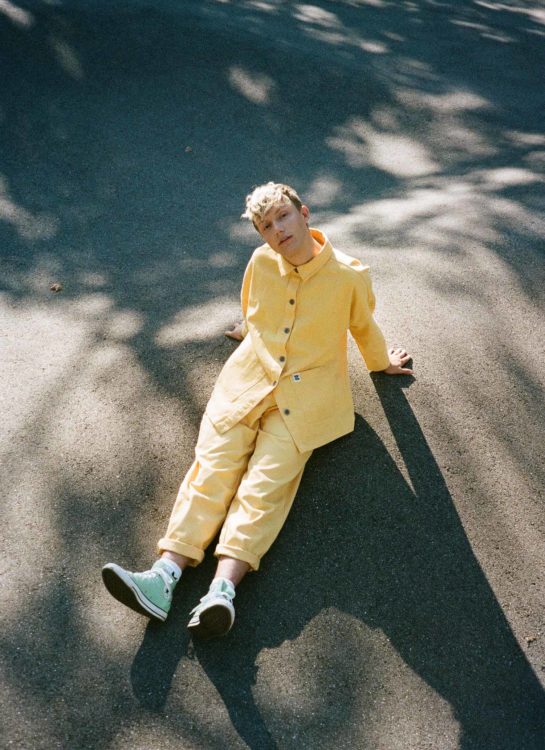 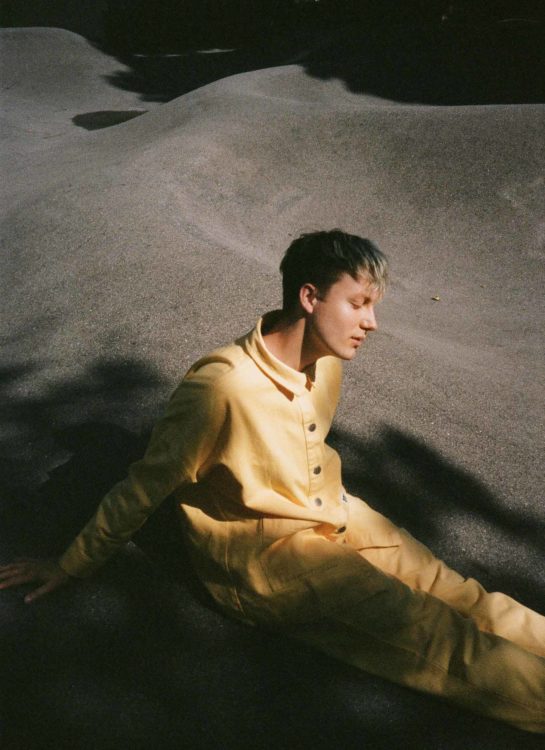 What’s inspiring you creatively at the moment?
I found my great-grand-uncle’s mandolin last summer and repaired it. I fell in love with the sound of this instrument. It’s tuned like a violin so my muscle memory as a guitar player leads to completely different chords and sounds than I’m used to.
What made you want to take the leap from electronica to broader singer-songwriting?
During the first lockdown, I went back to my parents’ place and had no gear but the acoustic guitar I wrote my first songs on as a child. If I wanted to make music, it had to be through that channel, basically. But beyond the circumstances, I think it was mostly the excitement of going back to something I used to love – playing the guitar and singing – and how new it felt.
How did you go about sonically experimenting in your production of “Magnet Letters”?
Focusing on songwriting allowed me to approach the production process with a fresh perspective. The sonic experimentation could be informed by the story my lyrics were telling. For example, the song “Magnet Letters” explores miscommunication and emotional repression. I wanted to give some space for these repressed feelings to explode and that’s where the production took over. Using granular sampling techniques and audio processing, I reworked my voice into what could have traditionally been a guitar solo. To me, it was a way to give the song’s narrator his screaming-in-a-pillow moment.
Your latest song is informed by your understanding of male emotional repression. What do you hope to accomplish by tackling these issues?
It’s mostly a reminder to myself. I’ve never been great at speaking up and conflict scares the hell out of me. I see it in a lot of my guy friends as well, and I think we’re really not helping ourselves behaving that way. Because once you’ve actually expressed something in a way that’s hearable by the person in front of you, then it’s out there, and everybody involved knows what they’re dealing with. I’ve let my friends and partners guess what was wrong for too long.
What brought you to the clown imagery that you use in the “Magnet Letters” video?
I just find this character pitiful and laughable all at once. He’s probably a part of me that I’m ashamed of and scared of. The word “clown” seemed to suit this description. 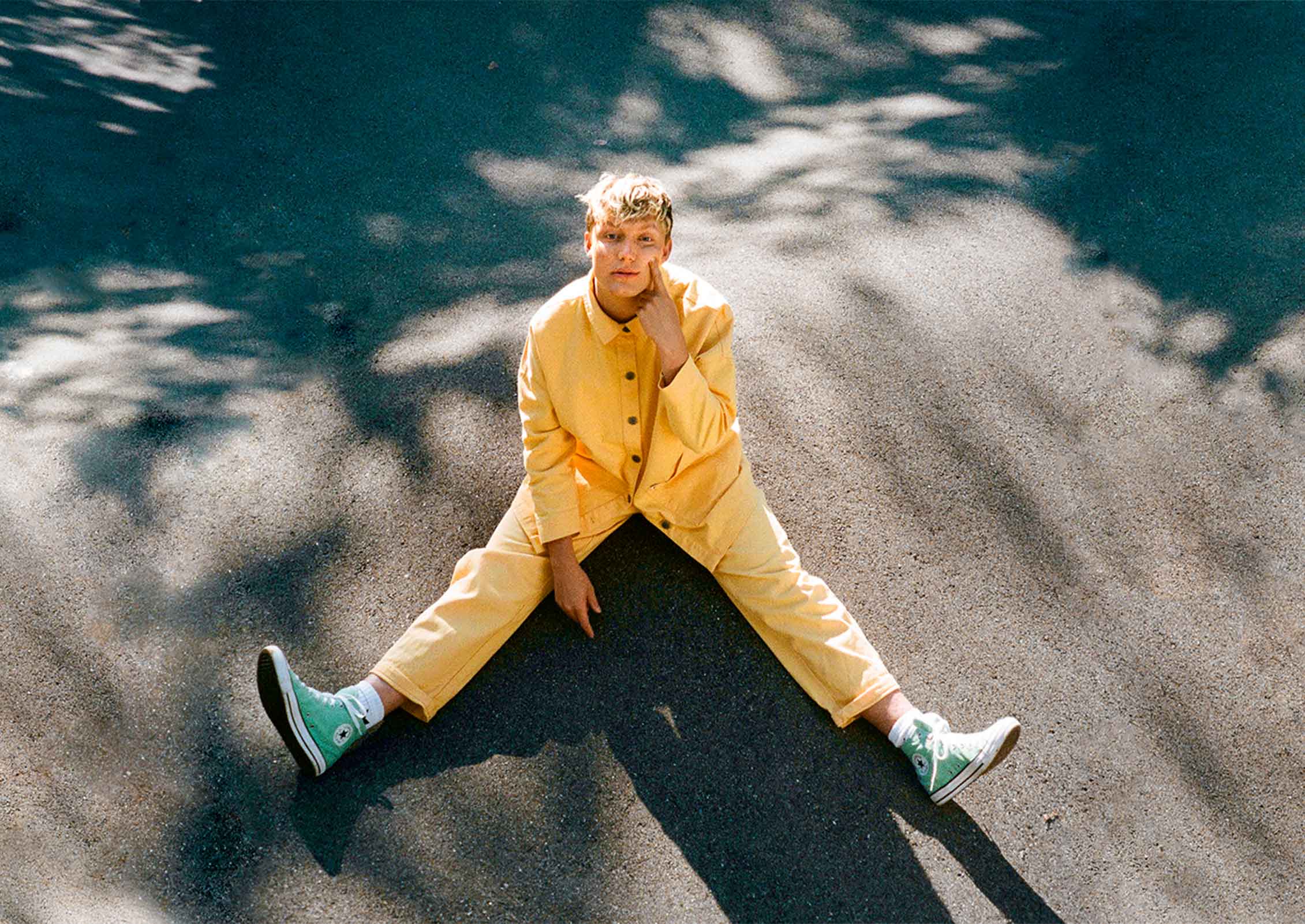 How was the experience of going back to your past for the latest music video? How did it inform the final product?
We shot four music videos for the Magnet Letters EP, all in the region I grew up in, Jura, Switzerland. It was so lovely to have the community be involved and help us. I used to skate with the guy who lent us his 1979 Opel Kadett, a local school let us use its gymnasium and swimming pool (where I learned to swim when I was three!), we were even given access to a cinema and to a stone quarry.
We also made a fifth video, for Death & Other Things using my family archives. I loved the idea of these innocent videos clashing with my lyrics about my fear of dying and growing old.  So… a lot of my past is in these videos, and it’s definitely for the better!
Why did you decide to change up your creative approach – going more solo and recording the guitar separately – for this EP?
Working in person has obviously been difficult over the past couple years and that definitely had an impact. I think given that the songs felt more personal from a lyrical standpoint also made me a little more protective. But I love to collaborate and really want to do it more for the next projects.
Your stated aim in the EP was to take yourself out of your comfort zone. How did that feel when you were actually making the music?
I had a lot of ups and downs. Writing lyrics and telling stories felt new and exhilarating. But I quite quickly started doubting my singing and my writing, comparing myself to lots of musicians I admire and getting stuck.
You’ve done lots more solo on this EP, but still alongside plenty of other creatives. What does collaboration mean to you?
When I started working with Lena Vallat, the creative director of the music videos, it was such a bowl of fresh air. Having someone else put some energy in the project was really refreshing. When Theo Le Sourd, the director, and Elaine Xu, the set designer, joined, this feeling was multiplied. They were such a creative team! If we had to credit them for everything they did, the three of them would also be make-up artists, drivers, chefs, and probably therapists.
What are you hoping to accomplish in 2022?
I’d like to keep on writing music that I find thrilling and honest. Connect with people!  I would love to tour as well! And make lots of homemade pizza.

Watch the music video for "Magnet Letters" below: