Renowned for his maverick presence as a “legend on [his] own little island”, Genesis Owusu is set to take on the rest of the world with his debut album, ‘Smiling With No Teeth’, a complex dismantling of his internal struggle with race and mental health. A profusion of genre showcases Owusu’s distinguished sonic ability, carefully crafting an “indescribable mutation” of rap, industrial punk, synth-pop funk and folk to provoke an enrapturing visceral experience.

Owusu has intrigued and captivated fans across Australia with sell-out shows, supporting the likes of Dead Prez, Col3trane, Sampa The Great, Cosmo’s Midnight, Noname, Aminé and Ruel. There is definitely appetite for Owsusu – along with his ski mask-clad hype-man “goons” to bring their unique energy to stages around the world.

Owusu dedicates the album to fellow eccentric deviants and unconventionals who refuse to fit the mold. Teasing fans with a pre-released silver string of singles, “Gold Chains”, “Don’t Need You”, “The Other Black Dog” and “Whip Cracker”, he foregrounds the turbulent energy charged through the album to give a taste of the delicate narrative woven through the 15 tracks. His story questions conformist and institutionalized expectations to explore a truth and reality to the happiness we hope for. ‘Smiling With No Teeth’ transforms fragile, dark and sagacious demons “into beautiful, youthful, ugly, timeless and strange music”.

We spoke with Genesis Owusu to unearth his story, from teenage Xbox games, Elton John and Jean-Michel Basquiat to his trademark face bandages 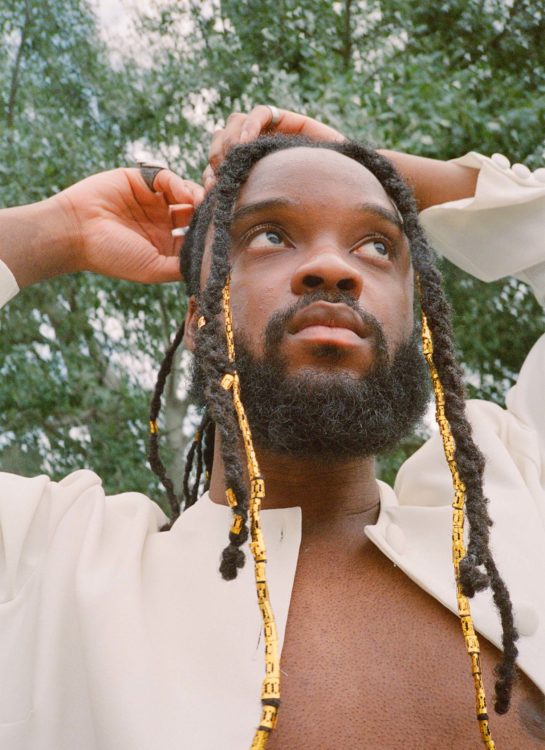 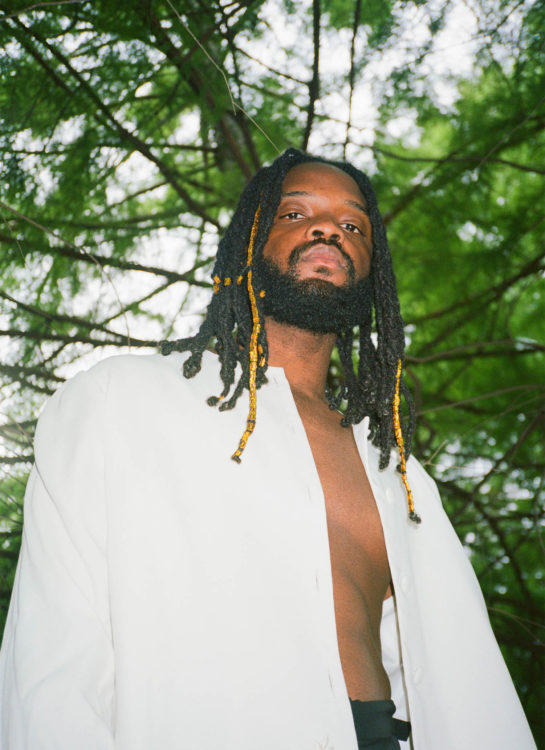 Congratulations on the debut album! How have you been feeling in the run-up to the release? COVID has delayed things a little, has this extra time given you the thinking space you needed or are you just itching for the world to hear your creation?

It’s been a bit of both, mostly the latter though. Putting this album out has been the number one thing on my mind for the last year, but at the same time, having months to be able to listen to it over and over again without getting sick of it really means I can put my seal of approval on it.

The album is a multi-layered unpacking of your internal struggle with race and mental health, how do you feel combining artistry with such a personal, meaningful and powerful message?

That’s the only reason I started making music in the first place. I used it as therapy, I didn’t really care about entertaining anyone. So, in a lot of ways, the album is me coming back to my roots.

You talk about how ‘Smiling With No Teeth’ is “slathering honey on your demons”. Who are your demons?

I guess the things that you mentioned in the last question. But anyone can smile with no teeth, so it differs from person to person.

This LP really feels like you are expanding your sonic palette with an uproar of rap moving through to industrial punk and hints of funk, you’ve even slipped in a folky-pop song about fishing. How did you arrive at this plethora of sound and how does it reflect your story?

Collaboration really. I made the album with a rag-tag band of musicians from all different genres, completely different worlds. Kirin J Callinan on guitar (synth pop), Touch Sensitive on bass (dance), Julian Sudek on drums (rock), and my manager Andrew Klippel on keys (jazz). Everyone brought their own musicality to the album, and the result was this indescribable mutation. And indescribable mutation has always been my favourite genre. 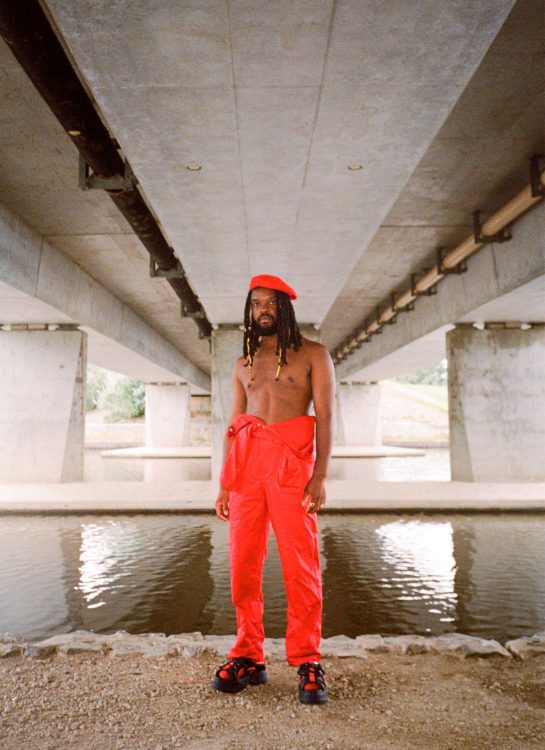 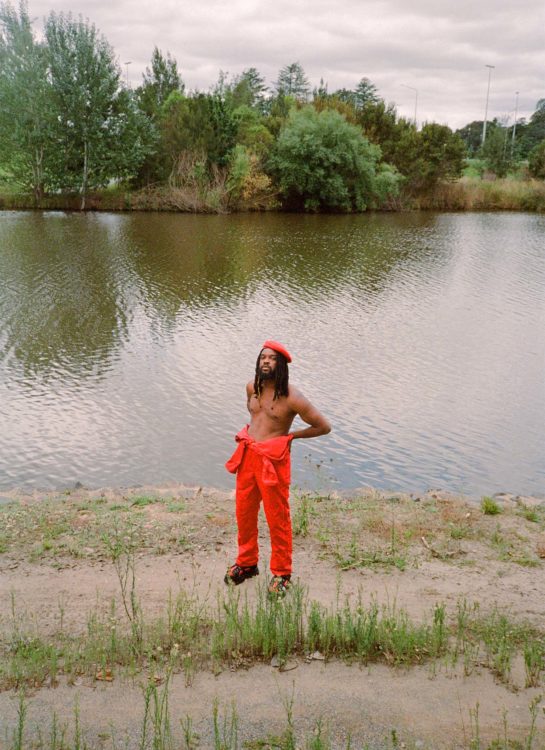 Your pre-released single “The Other Black Dog” contains a fiery, thick and raucous climactic energy which is certainly reproduced in the music video. Will you explain to us how your visuals, outfits and accessories like your face bandages, translate your personal narrative?

‘Smiling With No Teeth’ means pretending things are okay when they’re not. The album introduces characters known as The Black Dogs, which represent depression and the effects of racism. When I was creating these characters, I wanted to uniform them in a way which was fitting to the theme, and I landed on disjointed looking bandages, doused in gold grillz and rings. It symbolises trying to cover up huge, deep problems with superficial solutions.

You are renowned for a maverick presence. Do you feel that embodying this free-spiritedness and eccentricity bolsters the pioneering sonic path in your music?

Nah. It doesn’t get intellectualised that much. I just wear what I want and make what I make. It’s just visceral for the most part.

Do you remember your dreams? Can you describe one of them for us?

The album nods to pioneers Prince and David Byrne, you are also influenced by the likes of Outkast, Frank Ocean, Jimi Hendrix and Wu Tang Clan. Who are you listening to at the moment, have any new artists caught your ear?

I really like Agung Mango and Ryan Fennis, both Australian based artists. Outside of Australia, I’ve been digging Jean Dawson and Yves Tumor. 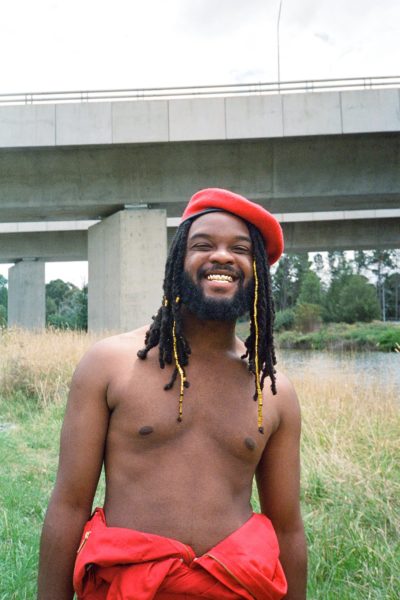 Elton John is a fan of yours, that must’ve been pretty great hear!

Yeah, my track “WUTD” got played on his radio segment, was very crazy and very random. Love it.

I have read that you visit the National Gallery of Australia for creative stimulation. Will you tell us about some of your favourite paintings?

It’s not technically a painting but I like Basquiat’s “Scull” a lot. My favourite piece of art is a 2002 Xbox game called Jet Set Radio Future. It’s set in future Tokyo where freedom of expression has been outlawed and tyrannical corporations now control the government and police force. You play as a member of a rollerblading, dancing, graffitiing street gang, who battles police and other rollerblading, dancing, graffitiing street gangs for turf and notoriety. All the gangs listen to this pirate radio station called Jet Set Radio, so the whole game is soundtracked by this crazy noise rock, future funk, alternative hip hop, electronic music. Changed my life as a 5-year-old.

What do you want your legacy to be?

“Genesis Owusu: did some cool shit”.

Stream Genesis Owusu's 'Smiling With No Teeth' album below: