The first time I saw Grimes live was at the Brudenell Social Club in Leeds when I was 17 years old. It’s not a huge space to feel, but I was still packed to find that it was packed. She’d just released her album Visions, and was touring across the UK at smaller venues. She hadn’t yet reached the level of universal prestige that she enjoys today. I specifically remember a man stumbling across over a bunch of loose wire and the entire venue plummeting into silence. While the crowd jeered for her to go a capella, she timidly barked back: “dude, I don’t do a capella!” And that was that, the beginning of a long standing obsession with the ultimate Canadian synth sister (it obvs didn’t take much!)

These days, she’s worlds away from small venue shows and drunk assholes destroying her equipment, These days, she’s internationally recognised for her unrivalled music prowess and unfaltering ability top an Album of the Year list.

Despite making headlines the past few months for a trippy (yet iconic) three-way altercation between her ex(?) beau Elon Musk and Azealia Banks, she’s back on our Twitter feed for all the right reasons; announcing her upcoming and highly anticipated 5th studio album, Miss_Anthropocene, which she describes as a “concept album about the Anthropomorphic Goddess of climate change: A psychedelic, space dwelling demon / beauty-Queen who relishes the end of the World”. OK, so we’re already sold.

But as we anticipate it’s release (WHEN?!), we give a nod towards some of our fave Grimes’ jams, from the omnipresent “Genesis” to the B-side beauty “Ambrosia” in our very own fantasy best-of compilation.

Taken from the album Geidi Primes.

Taken from the album Geidi Primes.

Taken from the EP Darkbloom.

Taken from the album Art Angels.

Taken from the album Art Angels.

"My Sister Says The Saddest Things" by Grimes

Taken from the album Halfaxa.

Taken from the album Halfaxa. 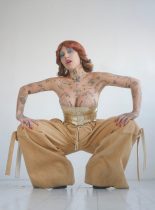