In Conversation With Cuppy

Cuppy speaks about owning her own narrative, her experience interning at Jay-Z’s Roc Nation and shares her favorite collaboration on her debut album ‘Original Copy’.

There are many artists who are known to champion the multidimensional sounds of Afrobeats across the globe, but one name that plays an essential part in this is Nigerian DJ and producer Cuppy. At the centre of the Afrobeats and Afroswing movement is where you’ll find her, creating her own stomping ground where she joins forces with a number of artists from the African diaspora to test and explore new sounds. Her latest album ‘Original Copy’ is a leading example of this as it taps into the Neo-Afrobeats genre which she rightfully coined herself.

Cuppy, who was born Florence Ifeoluwa Otedola, is known for her eclectic taste that stretches over the full spectrum of the genre. With every track being melodically rich, it tells tales of love and romance whilst affirming black pride and self-confidence, generating a feel-good body of work. From the afro-house inspired track “Epe” – a tribute to Cuppy’s hometown, to the mellow groove track “P.O.Y” (piece of you) featuring Ms Banks and Ycee, this album demonstrates the extensive levels of her creativity and her effortless knack for making good music that represents West Africa.

On the day of the interview, Cuppy is in high spirits despite recovering from her birthday bash the night before. In hopes of continuing her celebration through the weekend, it was the perfect moment for her to reflect on her career so far and shares some thoughts on the album. 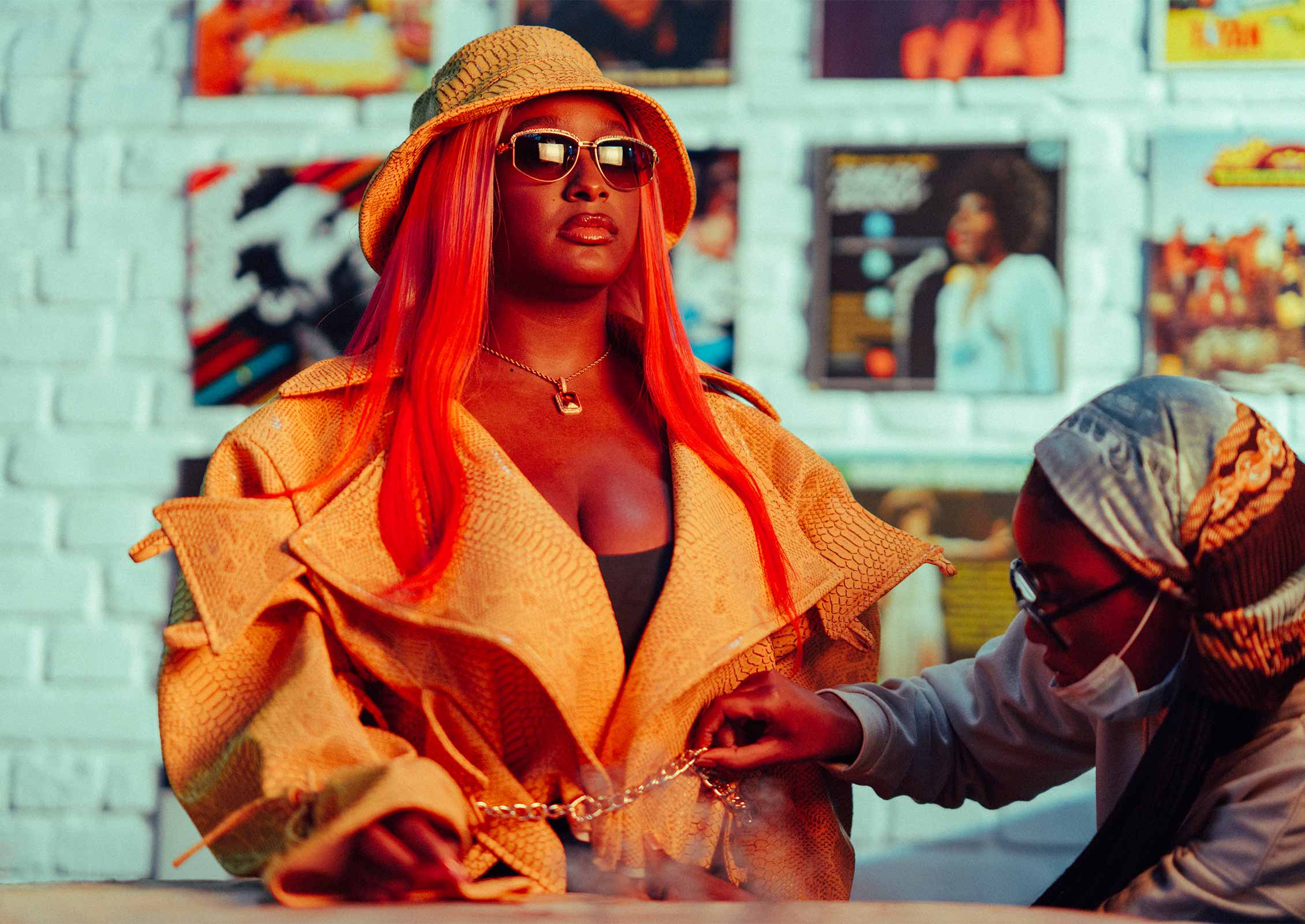 When was the first time you came across the DJ’ing world?

I was like 15, 16 and I walked into a club in Lagos, underaged, and I fell in love with the fact that the DJ had so much power. You know you could walk in there with thoughts, with stress, with things on your mind and music just had the power to allow you to escape from that.

What made you want to DJ instead of taking the typical artist route?

Well, DJing is my first love, I just love it. I feel like it’s so much more expressive than being an artist. I can play other people’s songs,  I create what I want to create and also the nightlife was a huge thing for me. It was a huge attraction for me the fact that, wow, I literally get paid to party. Well, that’s what I thought, I don’t think that anymore it’s actually quite hard work.

I can imagine, with all the late nights. How did you come up with the name DJ Cuppy?

Well, Cuppy comes from cupcakes. I was obsessed with baking when I was younger and let’s just say, I had cheeks like cupcakes. I was really cheerful and I just loved anything sugary so people used to call me cupcake. Then it was time to pick a DJ name and I went with Cuppy.

You also studied in London for some time when you were younger. Did this have an influence on the kinds of sounds you implement in your music today?

100 per cent. London was the focal point for me, going to university in London allowed me to fall even more in love with nightlife and allowed me to create a space that was kind of transatlantic. So despite being from Nigeria, I fell in love with the fact that sounds could fuse. When I first started going out the music that was huge at the time was Funky House, I loved it. It just made me fall in love with the positivity but now Funky House is dead, but I loved it. It sucks that when I play Funky House now, Crazy Cousins records or the Kyla record it doesn’t kick off like before.

UK music specifically? Gosh, I was about to say Drill but I think I’m still going to go with Afro Swing because, it’s not too far away from my genre, which is New Afrobeats. I think that it’s amazing what a lot of people are doing from NSG to Darkoo. It’s just really cool collaborations and really cool energy so it has to be Afro Swing.

For those that don’t know, what is Neo-Afrobeats? How did you coin the term?

What other artists would you put in this category?

Great question. Well, right now it’s a great time for Nigerian music in general. I would put Wizkid’s new album there, also Davido’s new album there, albums that I really love. You know, they’re going away from the traditional sound of Afrobeats, they’re infusing Reggae into it, they’re infusing Pop, Trap. Really exciting stuff, it’s experimental and really fun. It’s about pushing the envelope and trying something you haven’t tried before. 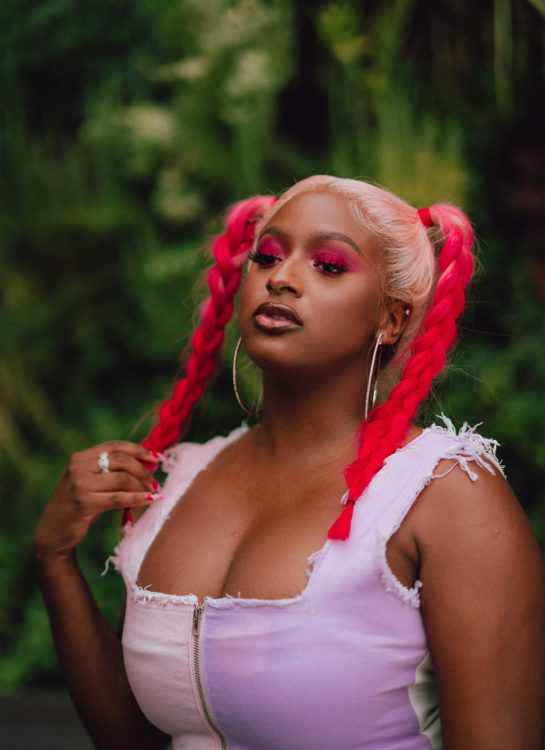 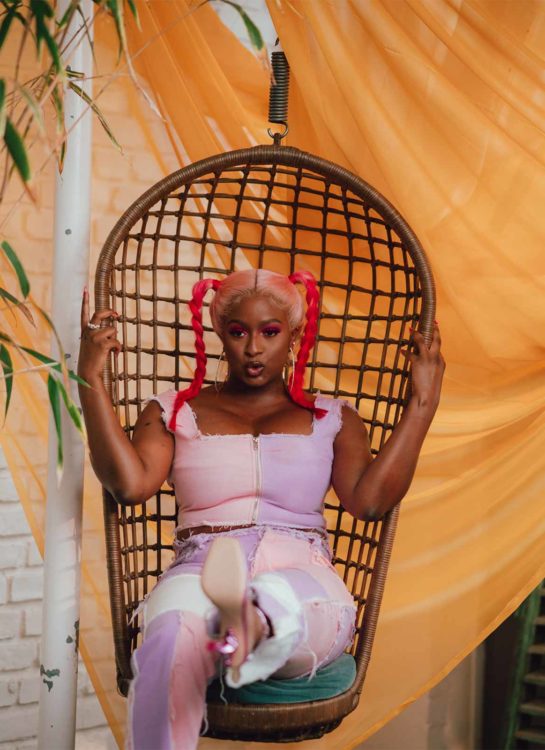 Congrats on your latest album release ‘Original Copy’! You have many notable collaborators in this project but who has been your favourite to work with so far and why?

My favourite to work with was probably Teni. Teni came in the studio and it was such a vibe. Like from start to finish singing, being so positive and I was actually in a really low place, to be honest. I had had a couple of artists say no to being on the album and I feel like Teni was that light and excitement I needed.

I like the oxymoron of the name ‘Original Copy’. What inspired it?

So I feel like I’m a bit of a, you know, oxymoron in my environment, I feel like I’m a contradiction. And so for me, it was about finding a name that represented me going against the grain. As a Nigerian woman, I’m doing something that a lot of people wouldn’t think I would do. Despite my education, despite who I am, you know, educated, coming from an entrepreneurial family, I’m following my passion, I’m doing music. It could be way easier and I could probably be making more money and have a much more stable environment, but I do what I do because I love it. I felt like that was about me just not being what people expected me to be and, using the name, original copy, it’s about me being myself unapologetically. There’s a quote that I’m living by which is that “you are born into this world an original so don’t die as a copy”. And that’s about celebrating who you are, if I want to have pink hair, that’s okay, if I want to sing that’s okay, if I want to be a DJ, that’s okay, if I want to have a radio show, it’s okay. And if I don’t want to do those things, it’s okay, if I want to have a pink Ferrari, it’s okay. If I want to be single, it’s okay. So it’s about me owning my own narrative.

As it’s your first debut album, what does this project mean to you?

It just means me conquering. I’ve said that  I don’t care how well this album does, I just want to know that I can do an album, I can set out and do something and get it done. That was always a dream for me, it was super important and I’m really glad that I’ve been able to do that.

I also read that you interned at Jay-Z’s Roc Nation. How much of a stepping stone was that for you in your career?

Oh, that was so important interning for Jay-Z was everything because I actually had to step back and be behind the scenes. So I wasn’t Cuppy the superstar, I was Cuppy the intern, I was learning what it was like to build brands, I was learning what it was like to have a proper job. I think working behind the scenes makes you deal with the scene itself much better.  I got really comfortable and I got confident, I understand that it’s not just about being an artist but also building a business, right? And it inspired me to start Red Velvet Music Group which is my company.

I haven’t come across many female DJs and producers from Nigeria. Who else should we be aware of right now?

Okay, so there’s someone that I’m obsessed with called Lady Donli, she’s amazing. There are other DJs as well doing their thing. There’s DJ switch, DJ Nana, DJ Lambo. I know she’s definitely doing well but I love Tems, she’s an amazing artist. I also think that there are cool people like Aramide there’s May7ven. There’s my sister Tolani who’s amazing. There are just different women doing all sorts of things in their own kind of scene, it’s amazing. We’re not quite all balanced and equal yet, there’s still a long way for us to go, but it’s definitely in a good place.

Alongside working in music, you also worked towards getting a degree in business school. How has that experience paid off in your career as a whole?

Oh, it’s been phenomenal. I learned how to make sure that I was always putting my best foot forward and making sure that I did have a business. I’m not just doing this as a hobby, I turned my passion into a profession and it’s just about understanding. I have clients, I have deliverables, I have things I need to make happen and my economics degree helped me have that discipline.

How did you manage to balance both of these commitments?

Lastly, what advice would you give to others looking to follow a similar path to yourself?

My advice would be to do what you do because you love it. That’s just really important, passion is everything. You know, I’ve been saying recently there’s two important days in your life, the day you were born and the day you find out why. It’s about finding a place that you do have a career and a job, but it’s fulfilling. You’re working right now, you’re having a chat with me so it’s almost like find a job you love and never work. You know it feels like you’re on a journey and you’re being fulfilled and you’re passionate, you’re getting closer to your purpose, it’s really important. We have to pay the bills but we also have to make sure that we’re happy because when we’re not happy, we don’t do well and we don’t flourish in a world where there’s so much creativity. I grew up being told that you have to be a doctor, you have to be a lawyer, you have to get married and I’m still fighting that narrative, so I just want everyone to make sure that they do what they do because they love it. Let that passion fuel you ahead.