In the Mix: Aquilo

Duo Aquilo create an exclusive mix and dive into the meaning of their upcoming album, 'A Safe Place To Be'.

For fans of The xx and London Grammar, Aquilo are a duo consisting of Ben Fletcher and Tom Higham, childhood friends from Silverdale, a small town in the Lake District. Finding their debut release, “Calling Me”, blow up on Hype Machine.

In the years since, Aquilo have played shows with Oh Wonder and performed at Glastonbury. Now, they’re gearing up to release their third album, ‘A Safe Place To Be’, following 2017’s ‘Silhouttes’ and 2018’s ‘ii’. In February next year, they start their own headline UK and Europe tour, where fans all over can hear the pair’s new record live for the first time.

Ahead of the album’s release, we caught up with the boys to hear more about it. Plus, they created an exclusive mix for you to hear, with a suggested listening location of…the bath. Better get the bubbles out! 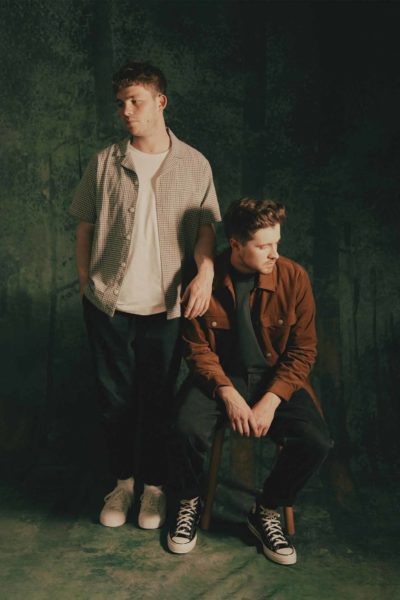 Your new album ‘A Safe Place To Be’ has just landed. What’s the story behind the title?

The title is the 2nd lyric from Our Bones Turn To Stone which was actually the first song we really made for the album. Or at least when we realised what the album could be. We decided to go home early for Christmas as writing songs was driving us up the wall and for some reason creatively we just needed a break. The irony is we took some of our studio with us and set up in Bens’s mum and dad’s basement! We then stumbled over something special (in our opinion).

Can you tell us the story behind the album?

After the 2nd album, we got sent away to write ‘a hit’ by our old label Island Records. We know that’s not how you make a hit, haha but we went along with it and it kind of ate us up. We were in LA working with people who didn’t get what we were about and just wanted to make HITS. It was so bad we didn’t come back with one song after a month of writing.
We were so disheartened and felt incapable of making music we decided to put Aquilo on hold and start something new. That ‘something new’ led us on to creating freely again and eventually our mates were like, you know you’re trying to pull the wool over people’s eyes. It’s so blatantly you two. We eventually came to and realised we had found ourselves making the new Aquilo album.

Have you got a fave track from the record?

Probably “Our Bones Turn To Stone” for personal reasons. It was also a major turning point for us working out what the hell we wanted the album to be.

What do you hope people will take away from the album?

Not really sure to be honest. We just hope it makes people feel something.
In lockdown, you worked on a detailed model village of your hometown, Silverdale, which features on the cover of the album. What led you to make this and what was the process like?
It all stems from the second lyric in “Our Bones Turn To Stone”, “What a safe place to be”. We originally had big ideas for music videos up in Silverdale but because of covid that just couldn’t happen. Our art director Charlie Drinkwater said how about if we can’t go up to Silverdale to shoot these videos, we create a miniature version of Silverdale? And that’s when the ideas started flowing. We realised that each song had its own place in the village and the songs that didn’t we just incorporated them as memories. For example, we have the 101 Diner that we used to eat at every morning in LA and is referenced in “Out In LA” just there in the middle of Silverdale. It’s become a village based on our memories together.
The process took 4/5 months as we worked with a family down in Kent that built the village over lockdown. You can literally see the love and care that’s been poured into it. Then of course we shot videos in the village.
You’re set to go on your first tour in nearly four years in 2022 around the UK and Europe. How are you feeling and what part of touring are you most excited about?
We’re honestly just buzzing to play in front of people that have listened over the years. See some actual faces you know?! Also, many of the songs we’ve released haven’t been played live and they often take on their own life in the live show so that’s something we’re really looking forward to.

What vibe were you hoping to create with this mix?

Chilled as, to be honest. One that you can maybe listen to in the bath? Haha.
Notion Magazine · Aquilo x Notion Exclusive Mix