In the Mix: Fyfe & Iskra Strings

Longtime collaborators Fyfe & Iskra Strings make Notion a cinematic mix in celebration of their upcoming album 'Interiority’ and chat about their process.

There is something that both halves of Fyfe & Iskra Strings agree on: that their music resists singular definition. A pair of musicians with classical roots, Paul Dixon (Fyfe) and James Underwood (Iskra Strings) met in the early 2000s when James was hired by Paul’s parents to give him violin lessons. Two decades on, the mutual admiration continues to blossom into musical output and their latest album ‘Interiority’ epitomises the variety of their influences.

The pair’s sound has been described by Fyfe as “song-based post-classical music, with an electronic impact”, and by James as “pop music with a cinematic twist”. The new album encompasses these concepts, whilst adding a layer of unpredictability that has also come to be synonymous with the duo. Scanning the tracklist, features from artists such as Rae Morris, Ghostpoet and Mysie may seem unexpected – but they demonstrate the capabilities of Fyfe & Iskra Strings to see musical possibility beyond a single genre.

Having also described ‘Interiority’ as possessing “a cinematic mindfulness”, it seems fitting that Fyfe & Iskra Strings have made Notion a mix inspired by their favourite film music and composers. Ranging from Jon Hopkins and Max Richter to Isobel Waller-Bridge, before taking a dive into the duo’s world of classical melodies – we chatted about their new album, collaborative process, and what’s on the horizon for 2022.

How would you introduce yourselves to people who hadn’t come across you, or your music before?

We find it hard to articulate our music. I would describe it as experimental pop music with a cinematic sensibility.

Where do your names, Fyfe and Iskra Strings, come from?

JAMES: Iskra means spark which seemed a good fit for my musical moniker.

As a pair you’re bringing together a wide variety of experience and a mix of musical genres – what was the process of joining together to start making music?

PAUL: We’ve known each other a long time – James has been like a mentor to me since my teens so we were always sending each other ideas we were working on. I was recording something as a favour for James one day and he played me some sketches and I got very excited about where they could end up if we collaborated. Either it was divine timing or good strategic thinking from James… perhaps a bit of both.

What do you feel like you learn from each other when writing and composing together?

JAMES: I approach music as an instrumentalist and as someone grounded in the classical music tradition. Collaborating with Fyfe has taught me how to structure pop songs in interesting and innovative ways.

Tell us about your upcoming album ‘Interiority’: you’ve described it as relating to “cleansing the past” in terms of social media – how so?

PAUL: Our song <deletia> was initially inspired by a friend that deleted his social media history in order to cleanse himself from the past. Much of the album was written during lockdown and deals with wanting to create new worlds and possibilities.

The new track from the album: “Night Sky” is out today – is there an aspect of the new project that you’re particularly proud of?

JAMES: The album is a testament to my friendship with Paul. We have an unusual musical history in that I used to teach and mentor him. We are now musical peers and I learn a lot from working together. I’m proud of what we’ve achieved with this album and the journey we are on. 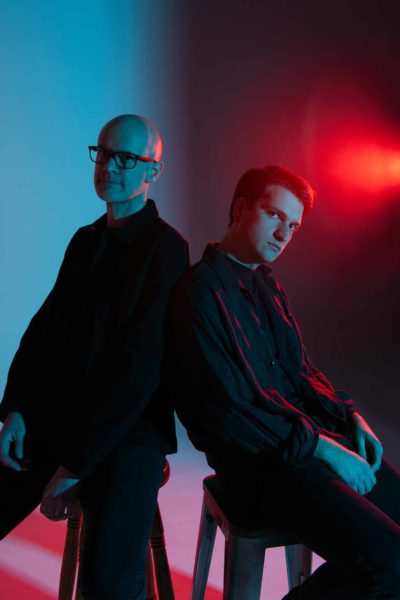 There are some pretty big features on ‘Interiority’ from the likes of Rae Morris, Ghostpoet and Mysie, how did these collaborations come about and what do you feel like these artists bring to the album?

PAUL: Some of the collaborations are artists I’ve been working with in terms of writing and production and so those conversations were natural overflows of sessions that were happening around the time of me and James writing the album. Others are artists we’ve been long term fans of and could so clearly hear their contributions being perfect for the tracks, even before they’d said yes to being involved. It’s felt like such a joyous process – I’m a firm believer in the power of collaboration and this album has been a real confirmation of it.

Your mix for Notion is inspired by film and film composers, how do you think your classic backgrounds have impacted your approach to the musical process, or the sound of the new album in particular?

PAUL: I lean heavily on James for his rich understanding of classical music. My own experiences learning music through childhood have definitely helped inform my tastes and given us a common language. I’d say just as important is James’s understanding and appreciation of all music especially the more left field alternative electronic and pop space. That’s probably been more of an aid in our collaboration.

Do you have a particular film or film composer that’s a favourite and why?

Your Notion mix is full of some expansive and emotive tracks – including a few of your own. Where can you imagine people listening to it and what do you hope the mix evokes for listeners?

JAMES: I can imagine listeners enjoying this mix late at night and allowing the music to spark their imaginations.

What are Fyfe & Iskra Strings looking forward to in 2022?

PAUL: I’m looking forward to the album being released in June and being able to reveal the musical world we’ve created. Hopefully they’ll be some live shows later in the year too.