Multi-hyphenate artist and creative, Daniel Briskin, speaks about his upcoming mixtape, his journey as an instrumentalist, and how he has developed his musical identity.

North London hailed artist, Daniel Briskin, is a name that everyone should know, not just as an artist but as a well rounded creative force in the industry. At the tender age of nineteen he has honed in on his skills as a producer, multi-instrumentalist and singer-songwriter, and takes full control of his creative identity and expression.

His latest single ‘Yellow’ is a manifestation of this. Unmatched by his introspective lyrical ability and an ear for detail, Briskin paints the picture of being self-aware enough to know you are not in a good place for a relationship. Featuring mellow synth layers and an erupting chorus that leans into the drum and bass genre, this track is a testament to his polished soundscape as both a producer and artist. We see Briskin join forces with long-time collaborator and visual artist, Joe Cruz, for the single artwork that blends both of their creative styles together. From Cruz’s unconventional approach to portraiture to Briskin’s references to Italian Renaissance paintings and Gummo.

Daniel Briskin is now hovering on our radar with a mixtape that is set to be released, capturing the euphoria of late adolescence with twinges of nostalgia.

Notion had the chance to chat with Briskin about his new project, his connection with Eddie Whelan for the “Yellow” music video, and the visual artists that inspire his work. 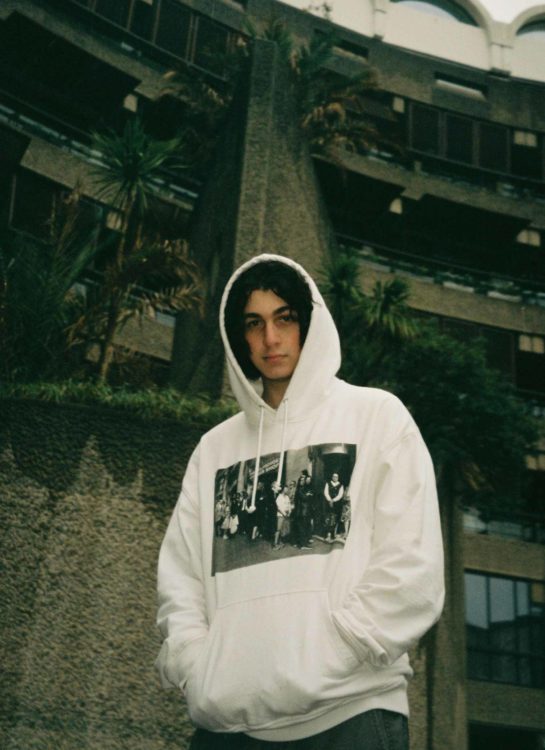 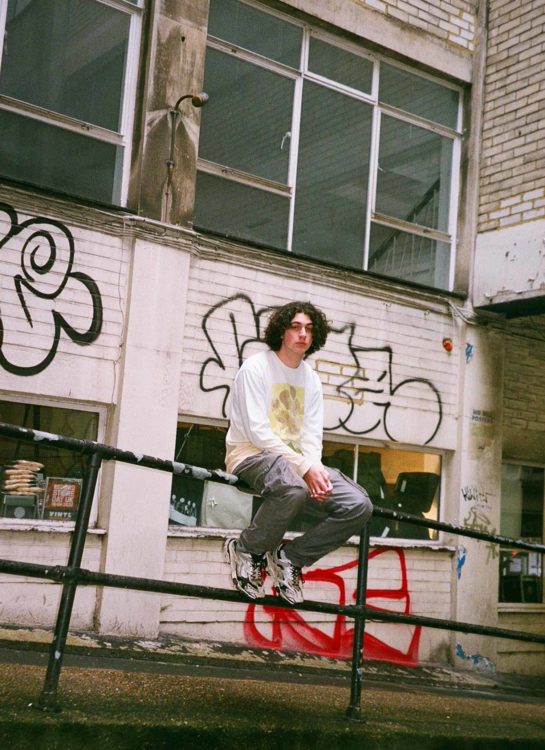 How have you found your creative process impacted during lockdown?
Well, I guess first and foremost I haven’t been able to collaborate as frequently as I would’ve liked to, and not being able to play live has made it difficult to get in front of people to make a meaningful connection. In terms of creation though, I actually think that it was surprisingly productive and I found myself getting better at writing and producing on my own. It’s something I’ve always done alongside working with some of my talented friends, but when you’re really forced to create alone I think it can really push you to your limits.
London is a city full of culture; how much does this play a part in your music and style?
I love London so much and the UK in general. It’s so inspiring to see so many different people being unapologetically themselves, whether it’s the cyberpunk and goth vibes in Camden or the trend setters and vintage collectors in soho. I think the eclecticism of the city inspired me to be diverse in what I wear and how I present myself. In terms of just music though, the city is a hot spot for most genres. It’s crazy that you can go to a studio in a pop writing session and just next door there is a rapper or a band just doing their own thing existing under the same roof.
Most multi-instrumentalists take the producer route as opposed to being an artist themselves. What made you want to pursue your own career as an artist?
The first thing that drove me towards music was that there were people who said they’d enjoyed hearing me sing. I was always interested in listening to whatever my parents were, whether it was the Beatles or Daniel Bedingfield off of a now compilation I was constantly singing along. My dad used to play the drums when he was younger, so I thought it only natural to follow in his footsteps.  Next was piano, and then with my brother growing up learning the guitar I had the equipment to learn it myself. By the time I started to learn the guitar I’d seen an interview where NAO was asked about production, her advice was that if you are a singer you should learn how to nail the sound you want because at the end of the day only you can get it exactly right. I guess I really took this to heart because I then started playing with garage band and sure enough moved on to Logic after begging my parents for it. I’m definitely still interested and still do write and produce for and with other artists but mostly that stays within a select group of people who I’m friends with before anything else.
Was music something you went to study or were you self-taught?
I went to BIMM in Fulham to study vocal performance and I mostly had teachers at one point or another on the individual instruments I play. I’d say though the person who really helped me find my voice was my singing teacher when I was little. She was and continues to be probably the best influence on my voice although I don’t see her as much she’s been a huge influence in some of the decisions I’ve made regarding music.
The video to your single ‘Yellow’ is very cool. What kind of visual artists inspire you?
I find myself a lot of the time looking for visuals that are perhaps bit left of field and out of the ordinary. I also love the avant-garde movements and the almost jagged sub-plots that are buried in most forms within the medium. My favourite artist right now has to be Genieve Figgis who is a painter I think blends beauty and darkness so well. I find her style to almost be hellish but simple and striking. There are literally so many artists I would love to work with whether it’s Rob Zombie’s eye for unsettling visual and directing to the weird and wonderful world of Nick Knight, I’m really interested in most aspects of art culture and would love to have a go at pursuing some in the future. 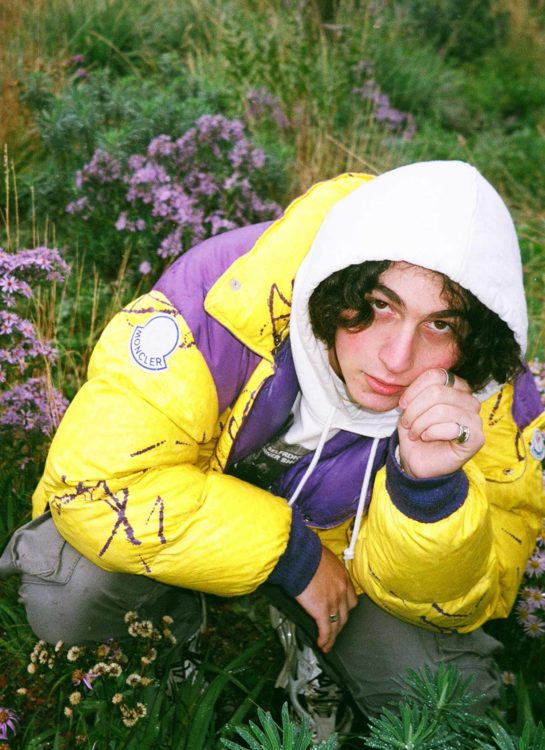 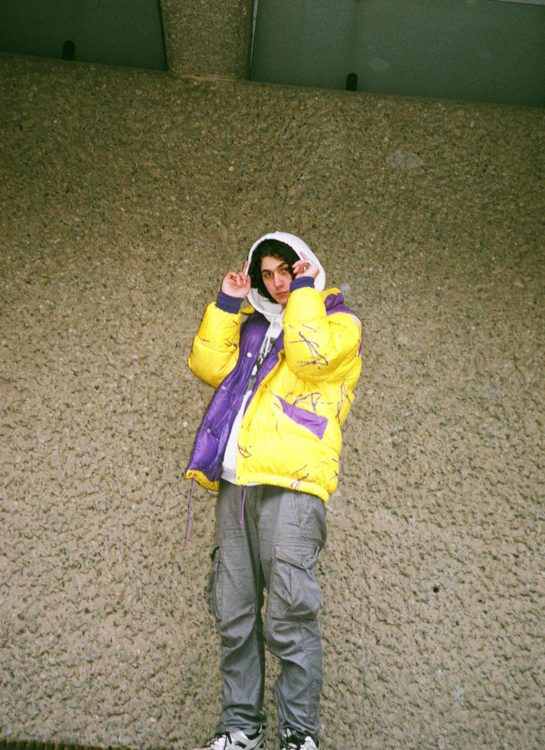 You collaborated with Eddie Whelan for the video, how did this connection happen?
We were introduced via Dan Sanders who is an amazing creative and a really great visualiser in terms of concept for look and general over-arching themes within the industry for artists, including but not limited to myself. Originally me, Dan and Michaela (who’s also been so helpful with me on my project) sat with Eddie and he had explained his vision for bringing people together through embracing in this tough time. It’s been such a manic year and it can be so easy to put your mental health to the side and fall into bad habits. The embrace is like both parties are saying “everything will be okay, I know it’s hard.” It feel straight away like this was the video I wanted to make.
The cover art is also very interesting, how much does imagery play a part in how you express yourself as an artist?
Cover art is EVERYTHING, I mean music aside albums like 808’s and heartbreaks and Blond all the way back to Aladdin Sane have these striking images that are so iconic. It’s the first thing a prospective listener will see and often times I know from personal experience if the artwork isn’t upto scratch it can even put you off of a song. I’ve been working with an amazing artist called Joe Cruz on the artwork for the songs on the mixtape and the mixtape itself. He has a really unique style that I thought was so different to anything I had been consuming in the best way possible, it felt like a no-brainer.
What kind of things helped you develop your style and aesthetic at such a young age?
I think to put it simply, the internet. You now have the whole world at your fingertips which is amazing, and I guess that leads to there being no limit on what you can consume. People are creating internet sub-culture where the scenes aren’t limited by personal reach and town boarders as they once were, and I think having access to this means that there’s such a wide variety of influences being taken in by young people nowadays. A lot of people say that trends come back around every however many years but with the internet these trends never fully finish. People are taking in so much information that it’s only natural you would see people finding perceived identity at younger and younger ages.
You have a mixtape coming out soon, Forever was a Feeling! Why have you decided to use a mixtape form over an EP or an album as a way to deliver your next project?
I want to make bodies of work, and the mixtape format allows me to move within the album structure whilst not having to adhere totally to the concept of an album. I think this
allows me to be more experimental in terms of production, aesthetic and sound. Mixtapes like So Far Gone by Drake, went a long way in starting to introduce an intimate side to the artist. I think that’s how I see it, as an introduction into how I think and proof of growth for years to come.
The mixtape will be your first full project release. What are you looking forward to most when this is out?
Finally having it out to be honest. I tend to be quite indecisive in terms of what my favourite songs are at the time purely because of the pace that we’re working at. So there’s a finished demo every few days which I think is going to be the next big thing, but Forever Was A Feeling has been since march something I’m so proud of. I feel like everyone goes through periods of self-doubt and don’t get me wrong I definitely do, but I can say with absolute certainty that the mixtape is my proudest piece of work to date.
It’s titled ‘Forever Was A Feeling’ – what does this mean to you?
I see the mixtape as a story. When me and Jamie (executive producer and co-writer) were plotting the narrative of the track listing it all just seemed to fall into place. I wanted the mixtape to feel cyclical. I like the idea of it being a journey that just keeps going, the first lyric on the record being “I made it to the other side” is so important to me because it really feels like you have. 18, the last song is an ode to being young. The song takes place after break then static which is the character coming to terms with the fact that their romantic relationship is over. Then right after 18 it’s back to Boy On The Lake where you’ve made it to the other side and are ready to start again. I think though the story of a hopeless romantic who is continually searching is a really lovely idea the subplot reads that society pushes us to be happy not with ourselves but with somebody else. You hardly ever see the single mother striving by themselves in Hollywood and mainstream media, and it seems the reason is to pander to the nuclear family narrative which I feel can be very damaging to certain groups of people.

Watch the music video for "Yellow" below: