London-based, Mancunian artist JAXN has been busy. Having already built a following on TikTok with 1.1 million likes, he’s committed to bringing a 90s vibe to a Gen-Z audience. New single “Foolin’ Around” is the perfect guitar-heavy tune for a sunny afternoon, bringing together his various influences for a fresh, distinct sound.

Evoking the Britpop singles of decades passed, JAXN music aims to transport the listener to a skate and surf scene, with elements reminscent of American Radio rock appearing throughout. Co-written with fellow Manchester musician Mattu, “Foolin’ Around” is a mission statement for JAXN’s throwback flavour, alongside his humour. Released with 2000s-esque visuals and plenty of evidence of JAXN’s inventive nature, it’s clear that creativity is the name of his game.

Notion caught up with JAXN, telling us all about his new single, how he put together the visuals and what’s for the rising artist. Dive in! 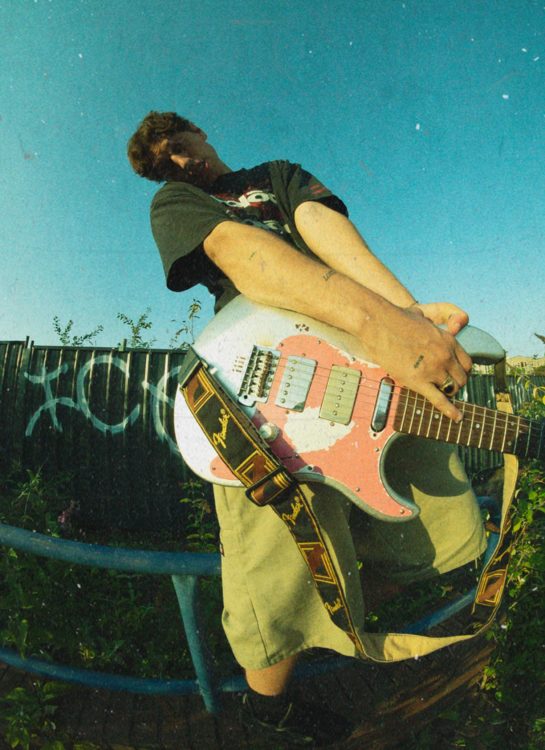 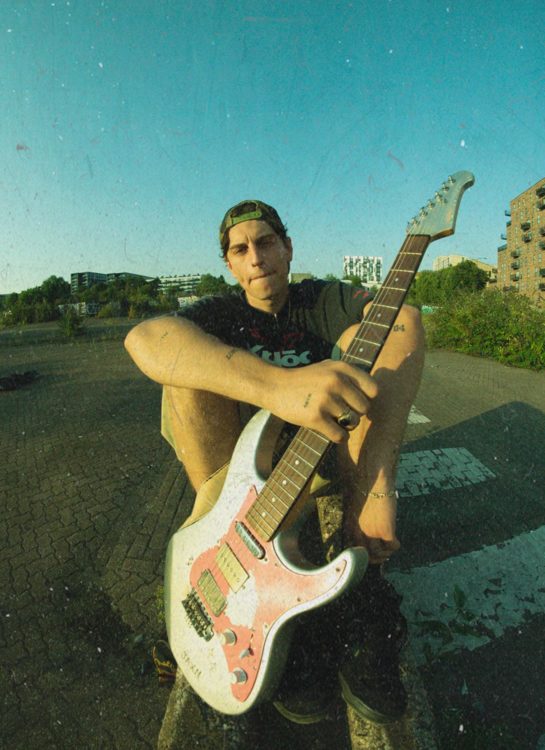 Hey JAXN, how’s your summer been going so far? Has it been a busy one?

My summer has been good thank you, ticked off a few milestones including my first live show, got loads of new music, had a run in with my landlord, the usual stuff.

Let’s talk about your new track “Foolin’ Around”, it has such a fun, retro laid-back vibe. What was the inspiration during the song writing?

I was walking through Manchester town centre and heard a guy tell his girlfriend to stop ‘Foolin’ Around’ with loads of emphasis on the ‘ooo’s’… it made me laugh man, so I put the phrase into my notes, not knowing at this stage how and when it would be used. A couple of weeks passed, and I was round at my mates playing early 2000’s playstation games getting our weekly fix of nostalgia. We played Tony Hawk’s Pro Skater, No Fear Downhill Mountain Biking and Snowboarding SSX, if I recall.

With those old school games you can spend hours on the loading screen just letting the soundtrack shuffle and along the way discovering the coolest stuff ever. Feeling inspired I picked up the guitar and began to write an idea I thought would slot nicely into the games soundtracks. I then remembered the guy I mentioned earlier, told my mate the story and started singing she’s ‘Foolin’ Around’ and coming up with ways in which your girl might be perceived as “Foooolin around”. That’s how the song was born.

Was there a nostalgic influence?

There certainly was, not a certain song in particular, just a feel. I find myself drifting in and out of daydreams, remembering cool films, soundtracks, flicking through the music channels on Sky as a kid. More and more I’m so lost in my imagination these days that all the influences I was brought up on just seem to fly out naturally.

Is there something you hope people come away with from the new tune?

I guess I just want the song to resonate with people who look for something a little different and left when exploring new music. It’d be cool if it ignites a flame in those who are too young to have really delved into the early 2000’s / late 90’s. Or equally if the tune brings older generations a dose of nostalgia, I’d like that man, that’d put a smile on my face.

The artwork extends the 90s feel, can you talk me through the process for its creation?

I love people asking me about the artwork. So I had this idea it’d be cool to grind a guitar down a rail as if it were a skateboard. I figured for the longevity of my music career it was probably not the best of ideas to snap my guitar neck at this stage. So I strapped it to the fence using cable ties, proceeded to bunny hop over the rusty rail on the hottest day of the year until we got the shot of me hanging in mid air. I then took some extra shots all on an old 2001 made handheld camera with a fish eye lense loosely attached and started to piece it all together. Super DIY, printed off the pictures, ripped some paper, had a cut and stick situation, drew up the typography and there you have it, voila! 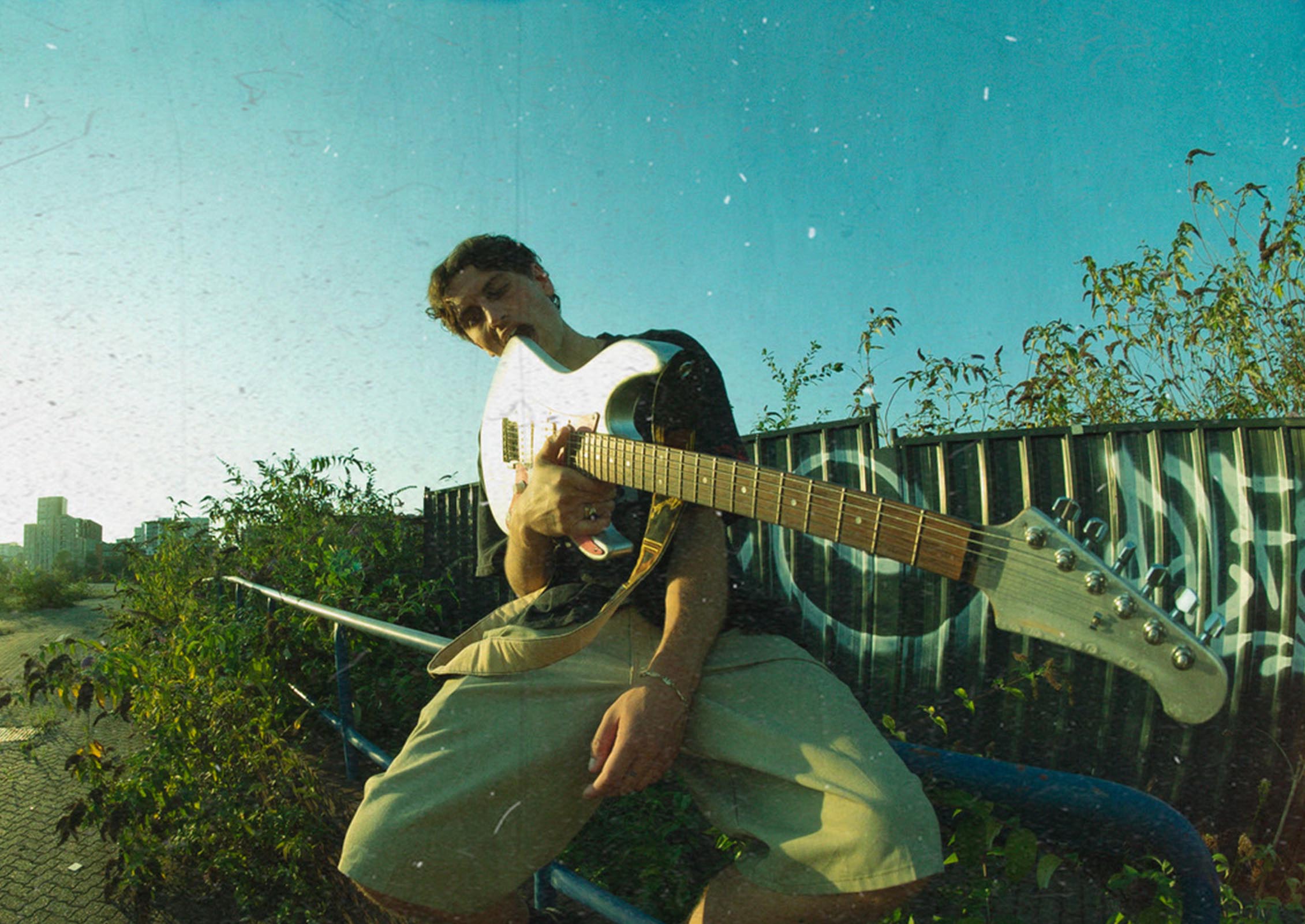 Your TikTok’s doing pretty well – do you enjoy making creative videos? Seems like a great way to connect with new listeners…

I really do, I like coming up with new ways to kind of aesthetically link a little video to my sound. There’s a lot to be said about expression, there’s a lot I don’t like about TikTok but in that sense it has helped me reach some like minded individuals I guess.

I was gifted a bass guitar when I was about 9 years old, already obsessed with ‘Flea’, I set about making my little hands make the strings work. I remember being so obsessed, I was the same with drawing and painting at the time, I had to get it, it consumed my mind like nothing else. From there guitar came to me pretty rapid, I then went on to keys and drums and eventually production. The bass kick started everything essentially, bass face baby.

Who were some of your biggest inspirations growing up, musical or otherwise?

What’s on the bucket list, is there a venue or festival that’s the dream set?

I’ve never been to Glastonbury, all I knew growing up were the muddy Northern Festivals, so potentially a Leeds Fest headline would hit me right in my feelings. I’d also feel more comfortable with the crowd you know.

What’s next for JAXN?

Still got a couple of funky fresh things in pipeline for 2022 but really focussing on writing new material with big plans for 2023!

Listen to "Foolin' Around" by JAXN below: