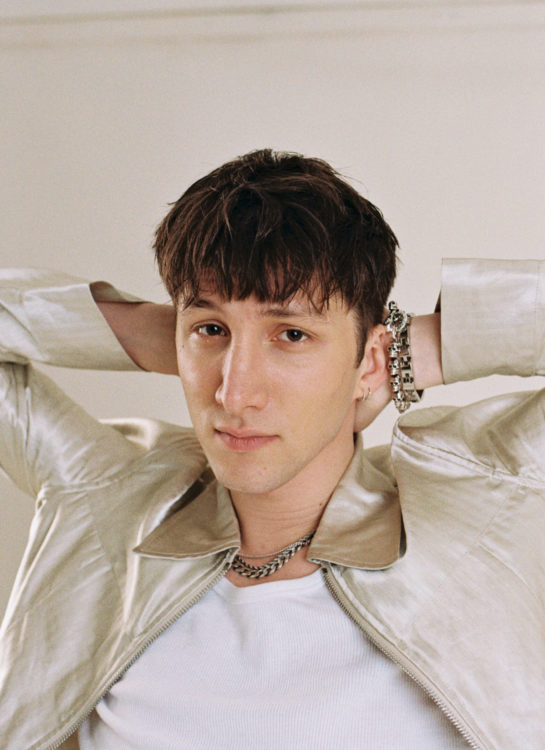 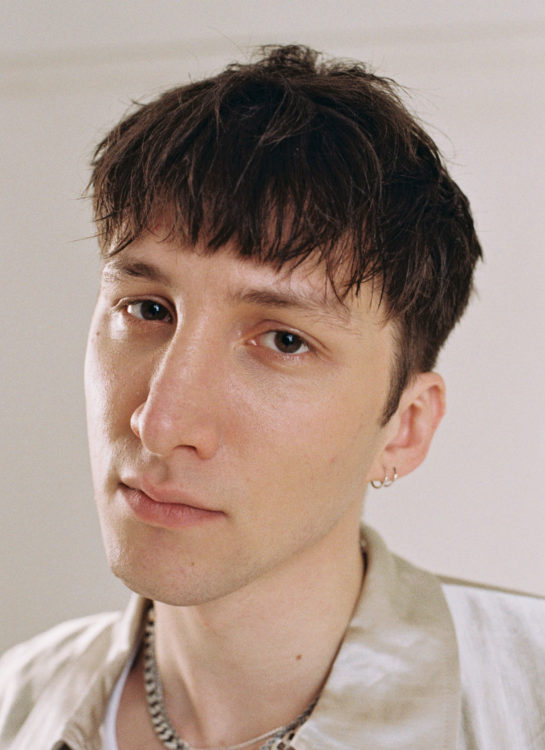 Joey Maxwell really is generous to his growing fanbase. The singer-songwriter and producer makes bedroom pop with The Streets’ blunt lyricism that draws on everything from northern soul to ‘90s indie, plus nuggets of jungle and garage. Not only is Maxwell dropping his debut mixtape, ‘Trying Not To Deep It’, in the coming months, he’s also been working on a YouTube series of the same name. His mailing-list dishes out unreleased demos, rather than monotonous marketing, and to top it off, the 23-year-old today shares a live-video for his latest single “Myself”, premiering exclusively with Notion. His chosen backdrop? An aquarium-cum-club.

Joey tells me that he asked for marine life as backing dancers, basically just because he likes fish. As a recent Polydor signee, Maxwell is adjusting to having his more outlandish ideas brought to life. “I should’ve said ‘Oh I really like Barbados,” he jokes. 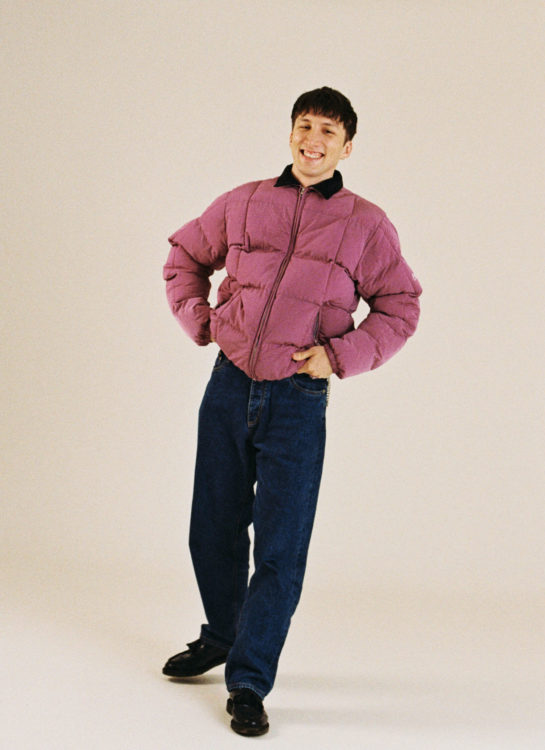 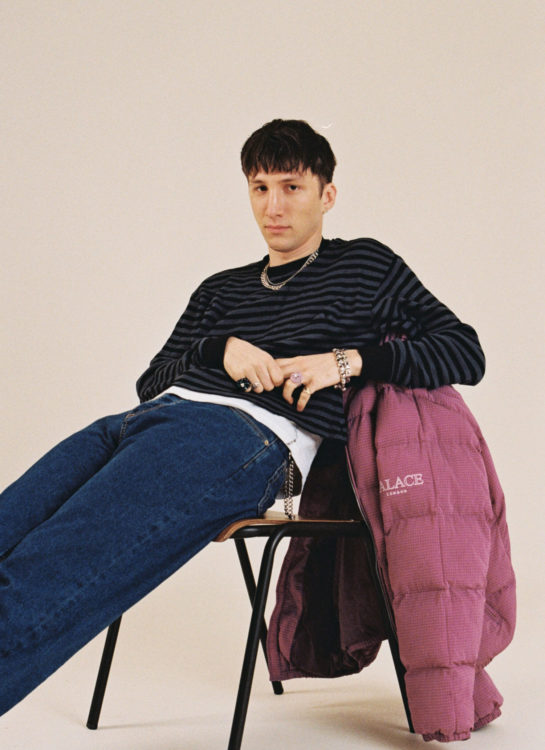 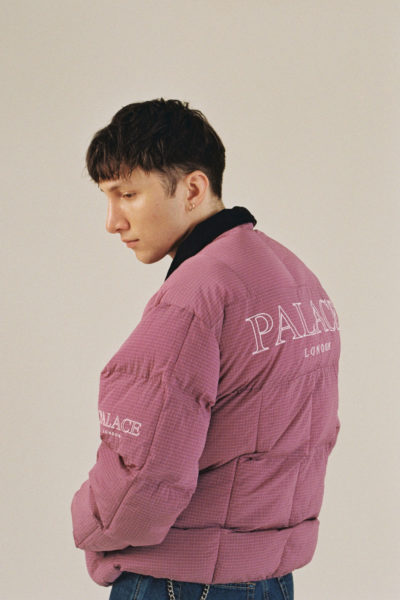 A BRIT school alumni, he dropped out of his Goldsmiths music degree after feeling uninspired by the more lethargic university-life.“My school-teachers were like: ‘The standard is gonna drop a lot’”, he says. “I didn’t believe them, but it really did. So it was hard to see the point of going somewhere like that after BRIT.” A stint in an indie band then saw him open for Declan Mckenna and Rat Boy before his teenage years were out.

However, after sharpening his production skills, Maxwell took the reins himself. Incorporating his myriad of musical influences, his solid, debut solo EP ‘Natureland’ came last January. But in upcoming mixtape ‘Trying Not To Deep It’, he feels freer than ever before. With a mission to make music that’s as emotive as entertaining – his at-times despondent lyrics are offset by jaunty delivery, taking in everything from mental health, to falling in love, and self-acceptance. Lead single “Streetlights” preceded “Myself” in October, accompanied by a music video for which he cites Peep Show and Jedward as muses.

For Notion, Joey breaks-down said video, his upcoming mixtape, Youtube series, and reveals the breakfast cereal that is getting him through lockdown. 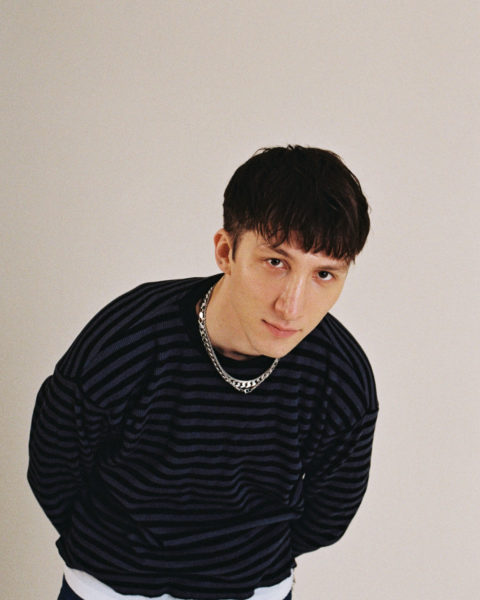 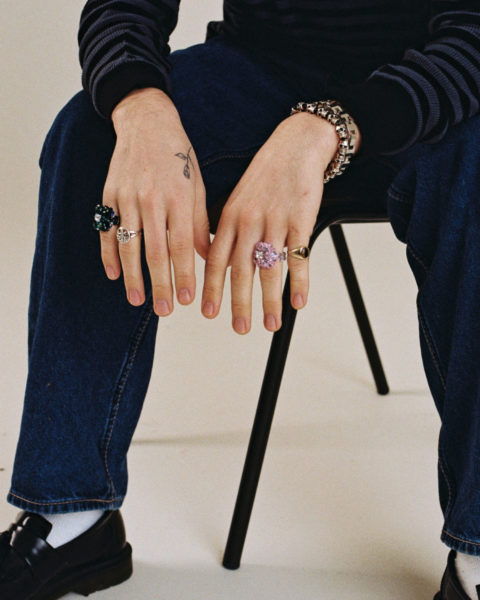 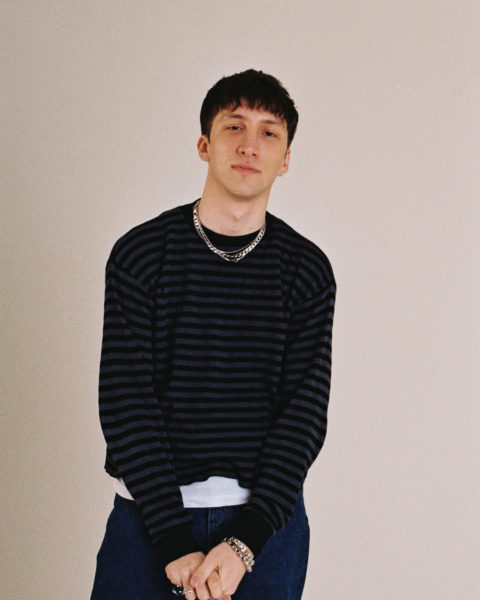 Your own music reflects a very varied musical diet, but what do you remember first hearing around the house as a kid?

There wasn’t that much music in the house, but my mum grew up with a lot of punk bands around London. So, I had a lot of people around me that used to be in that world, for e.g. Segs from The Ruts was a close family friend. I always say that I wanted to be a rockstar before I necessarily wanted to make music – it sounds quite crass to say, but I think it’s sort of the truth.

As a kid, you and Segs used to hang out around the nightclub Brixton Jamm. What was that like?

The Ruts had a studio above the club at the time. I would just go and record a couple of demos, but mainly just hang out, to be honest, and watch them all do it. But, that studio was a big meeting ground for everyone. And you’d have people like, Tenor Fly, whilst he was still alive, the lead singer of Fat White Family; he came. Just all of these people coming in and out, so for me, I was just like a wide-eyed little kid, just watching. And I went clubbing from quite a young age because it was quite accessible. I think it’s maybe slightly a London thing – doing that stuff is quite easy. Brixton Jamm, you could literally jump the fucking wall on the other side, and get in, and pretend you’ve got an old wrist band or whatever. So, yeah I guess growing up and partying was part of my musical consumption, and the other part was what I was finding from listening to music on my own.

Is the rockstar life still something that appeals to you?

I think it’s subsided quite a lot, to be honest. Like I was in the supermarket the other day and I was analysing which cereal had the most berries. So, don’t get me wrong, the dream is to be playing and touring and doing all that stuff, but in terms of being a rockstar, I think it is a slightly dated image maybe, that I don’t need to be. I wanna do music, and I’m lucky that it’s my job now and I just wanna keep that going.

You seem like a bit of a cereal connoisseur, in the video for “Streetlights” there is a Frosties inspired rug! What cereal is getting you through lockdown?

I’m on a bit of a healthy thing, so I’ve been working with the Alpen. It’s good though because what you do is like, you mix it with some granola, then it’s good. So, I’m on the oat milk, no sugars, Alpen vibe. It’s alright!

The video for the latest single “Myself”, is inspired by Peep Show and Jedward?

Initially, I had this idea of some sort of Jedward, Eurovision style contest going really wrong. I just liked the idea of displaying the themes as two people. And then the Peep Show camera style came in really through the director Benji; he really brought that in. So yeah I love that video, it’s sick! 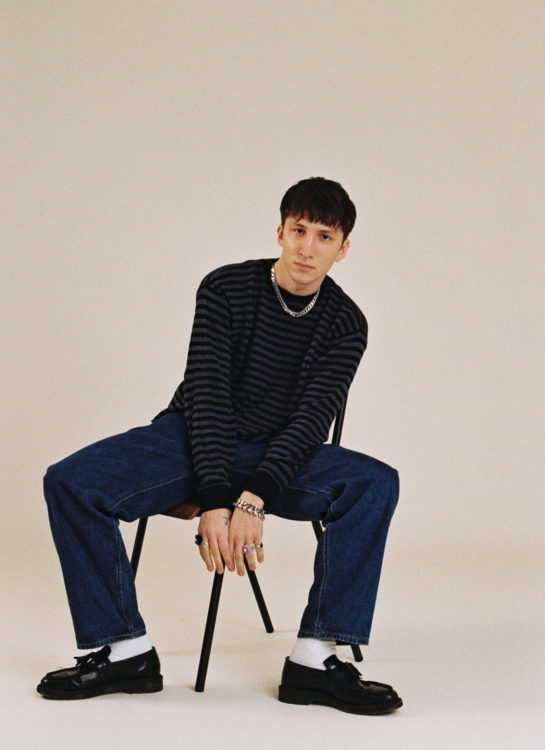 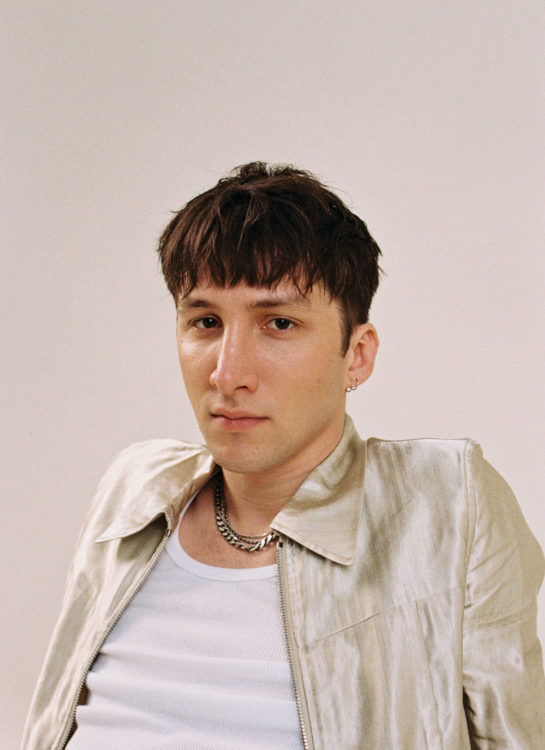 Have you enjoyed the chance to work with a bigger team to craft this visual identity since signing to Polydor?

Yeah, it’s great. I think that’s the maddest thing about this whole thing. Like, before I’d have an idea, and it would be quite hard to pull off. But they’ve only encouraged everything that I’ve said. Like with this aquarium video that we have coming out, imagine I said like ‘Oh it would be sick to be around some big sharks’, and then they make it happen.

So your new live-performance video of “Myself” was filmed in an aquarium. Tell us more about that?

When we needed to make a live video, for me, they were like: ‘Well where do you wanna do it?’ And how often are you gonna be able to go to the aquarium with no one there? So it was sort of like, why not? I love fish, man. I’ve got these fish (swipes camera round to show his fish tank). So, yeah, it was a great opportunity.

It precedes the new mixtape, ‘Trying Not To Deep It’. What was the aim with this project?

I was getting to a point of feeling more confident that I could actually be a solo artist because I lacked a lot of self-belief when I started this project, and that slowly built when the team grew. So, I was feeling more able to speak more personally and from the heart. There’s a lot of themes that I hadn’t felt able to speak about before, partly because it just wasn’t the time.

I chat more about mental health on this one, which I think is so important to do and it’s such a great thing that more and more artists and musicians are doing that. And, at the same time, I was bare falling in love when I wrote this mixtape as well. But, with everything that I do, there is an emphasis on keeping it light. I want to be able to talk about those things, but I also want to entertain people and make music that’s enjoyable and fun. Try not to deep it, that’s just what I think about everything. 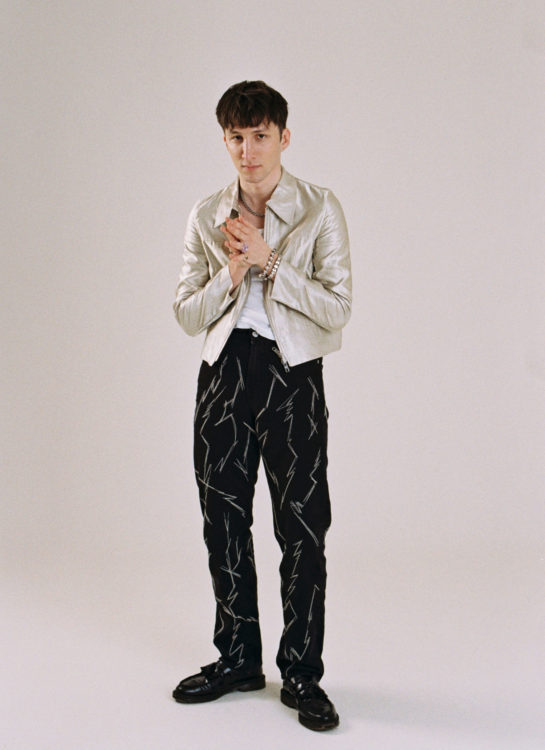 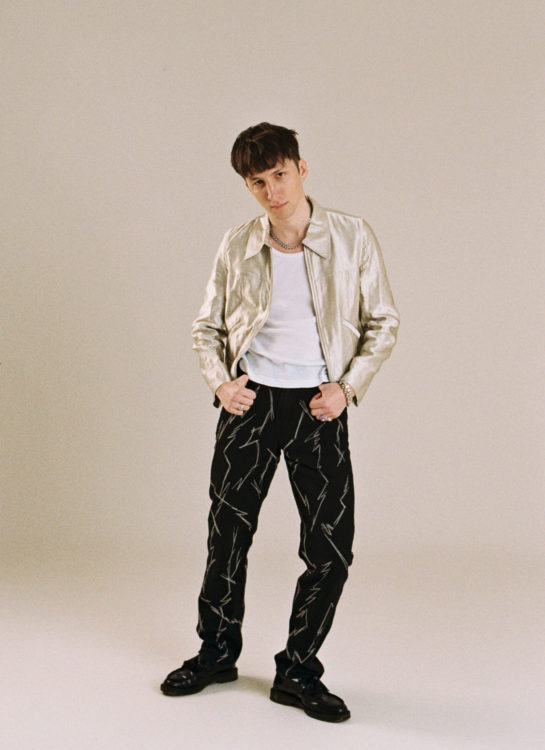 How have you gained confidence as a solo artist?

The transition from me wanting music to be my full-time job, and then it becoming my full-time job, when I signed my publishing deal, was a big factor. That gave me a massive, needed confidence boost. It’s easier to not stress over those small things when you know at the end of the day you’ve got a job to do.

What was your side-job while you waited?

I did the pub thing for long. I was just working in loads of pubs around South London. And, then the last job I had before signing, was just like nannying these little four-year-old twins, so that was actually blessed, they were sick.

What has been your favourite thing about going solo?

I think when I was writing music with the band, my focus was always: ‘How am I gonna do this live?’ Do you know what I mean? Because there was no playback or nothing like that, it had to be played by everyone on stage. So, I totally got rid of that idea with being a solo act now, and yeah it basically just let me do whatever really. And since then, having that freedom has just shown me so many new ways to write music.

In your ‘Trying Not To Deep It’ YouTube series, you are teaming up with other emerging artists. Tell us about that?

The first one is shot and edited, and it will be coming out, maybe next week. It’s with Finn Askew who is actually a label mate. So, the premise is that we have like an hour to make a tune or whatever, and then have a guest that comes and performs, or we write it together. It’s just about enjoying the craft really. And Finn is like a mad talent; he’s a sick vocalist. I pretty much just whipped up a good beat and he sang over it. So, yeah there are other things involved, like some questions and we played FIFA. The ultimate purpose is that it will be a good platform for up and coming artists to show more of their personalities. But, also like, the best thing about doing the few festivals that I have done is like meeting everyone, you’re always connecting with other artists. Obviously with that not being possible, to be able to do something like this and connect with other artists is great. 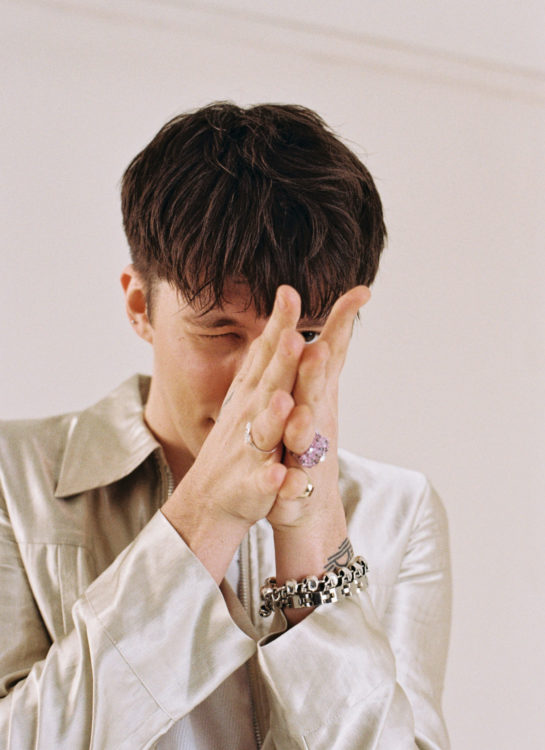 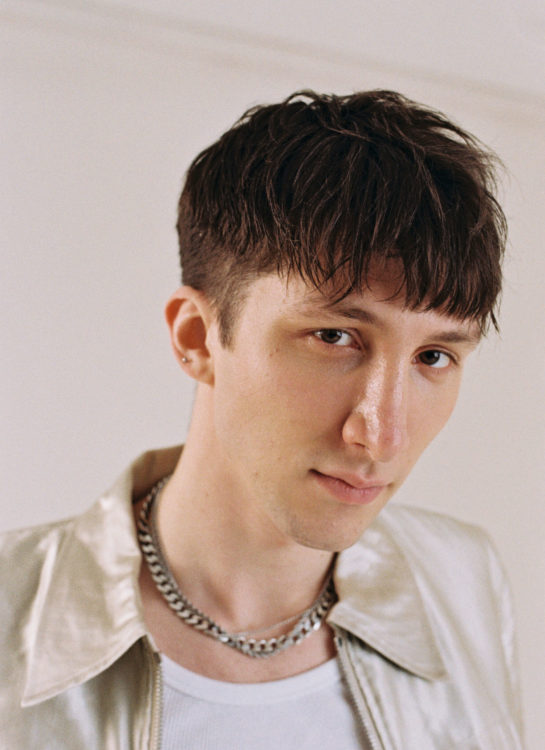 When you are not making music, where are you most in your element?

I’ve been running, so you might see me on a run. It’s nice to just get out of the house, and other than that, I would just be gaming, playing FIFA.

What do you listen to when you’re running?

Credit where credit’s due, like all the algorithmic stuff on Spotify is really good. I was listening to the band Bamily today; I put their radio on.

You have recently said goodbye to your trademark mullet. Should we expect it to be making a comeback?

It’s only gone because it was just getting long, and it’s too hard to maintain in and out of lockdowns. People think mullets are reckless or whatever. But, it’s very hard to maintain, it’s a real art form. I genuinely loved it, and it was becoming a bit of a USP, to be honest.

Watch Joey Maxwell perform "Myself" at London's Club Aquarium below: