Julius Black: Old and New Together

Rising Gen Z star Julius Black chats to Notion about his lifelong love for The Beatles, his anti-heroic new EP and his excitement for live touring.

In Julius Black’s music, the old and the new exist in total harmony. Baker grew up absorbing some of the greats of musical history, opting to study classical music from a young age. He also took a keen interest in the music of iconic acts such as The Beatles and David Bowie as he came of age in New Zealand.

However, Black wasn’t content with just repackaging the tunes of yesteryear; he also gravitated towards some of the biggest contemporary acts around, such as James Blake, Kanye West and Frank Ocean. It’s in that mixture of past and present where his own music has found its form, with Black having built his own unique sound, both nostalgic and cutting-edge.

He released his debut EP ‘Dopamine’ last year, and he has been eager to keep up the pace. His latest run of work has culminated in a brand new five-song collection, ‘Together We Still Go Down in the Dark’, in which Black tells the story of a relationship through the stylised lens of a hero descending into madness after a toxic relationship. It’s a bold work of storytelling that clearly announces Black’s arrival as a member of the Gen Z music vanguard.

To celebrate his new EP drop, we sat down with Julius Black to chat about his storytelling choices, his mixture of music inspirations and his excitement at live touring. 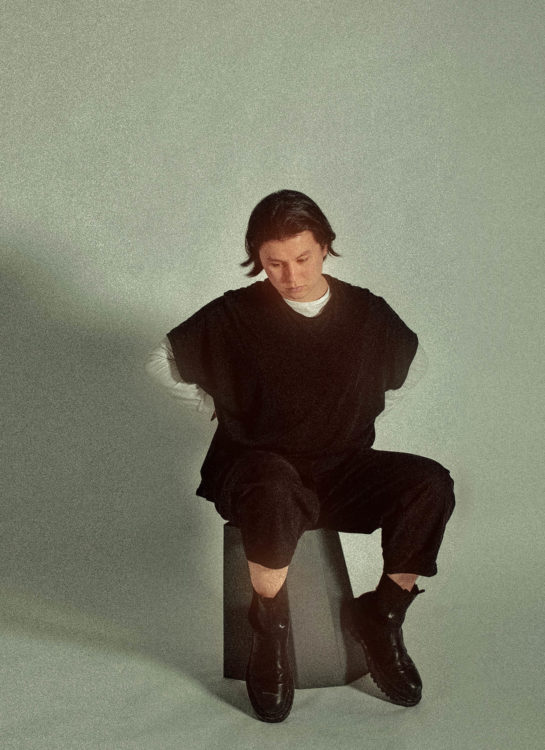 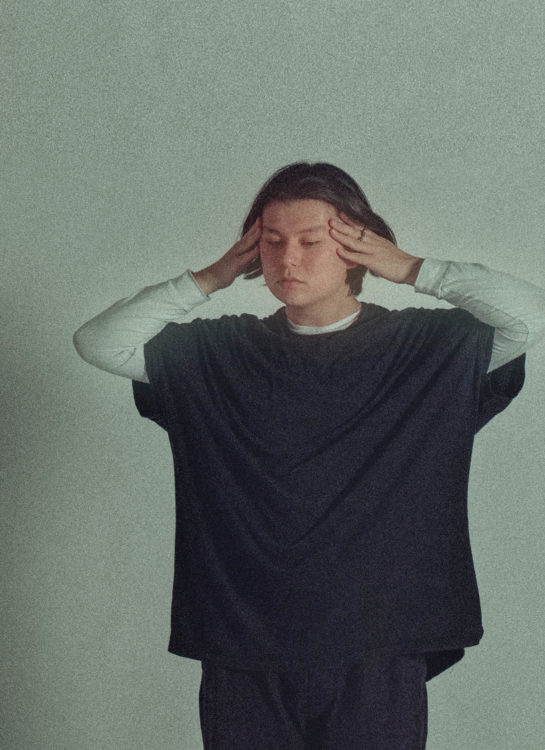 What first got you to start making music?
My Dad! He’s the best, he made me practice classical piano obviously but he also introduced me to The Beatles and the Police. They are the reasons why I wanted to write songs. I remember my dad took me on a road trip and we only brought a ‘greatest hits police album’ and I annoyed the shit out of him by trying to harmonise over ‘every breath you take’ 800 times and not getting it correctly.
You’ve cited The Beatles as a huge inspiration. What drew you to them?
My dad bought a greatest hits Beatles CD when I was 5 years old and it became my first introduction to pop music and songwriting. Their ability to write catchy hooks, and really intriguing lyrics have been a big part of my songwriting development.  Their music feels more relevant than ever, especially the messages of positivity and kindness. It will always be very nostalgic for me to listen to and I enjoy it a lot.
How did studying classical music from a young age help you develop?
It’s kind of funny, because I really didn’t like doing grade exams and practicing perfect piano technique and I had a teacher who told my mother I should quit music when I was 8 years old because I wasn’t good at reading music.  As I have gotten older  I really thank my parents for making me practice, I think classical music has a really big part in pop music. Especially when it comes to harmony and there’s hooky things about concertos and pieces of music. My song Form of Self Defence is just me messing around with Bach’s Ave Maria and making it my own.
Why did it feel right to make this EP such a defined narrative?
I love when a project becomes a world, as opposed to just a project. I love stories, pictures, visuals, themes. Most of the time I don’t even try to write singles, I just write as much as I can and just pick. I think obviously with Spotify and streaming platforms we are way more singles oriented but in my heart I really want to just make the project that’s gonna excite the 10 year old me,  ‘Boomerang”  I wrote from the ego maniac part of me, and it flows into Together we Go down in the dark perfectly because you hear the repercussions.  We really changed our approach on the production for this EP too because we wanted to go for a dryer, warmer sound, as apposed to airy and ethereal on the first EP.
Storytelling is a huge part of your music, but so is personal expression. How do you find room for your own experiences in your music?
Stories to me are just extensions of my personal experiences, I try to write from an honest place. I think with lyric’s It’s really freeing to write from a perspective of a character to get out of your own skin and be more creative. Most of the time that character is just me but slightly different or the emotions or stakes have been turned up to 11.  That gives me permission to add more colour and liberation to the music. 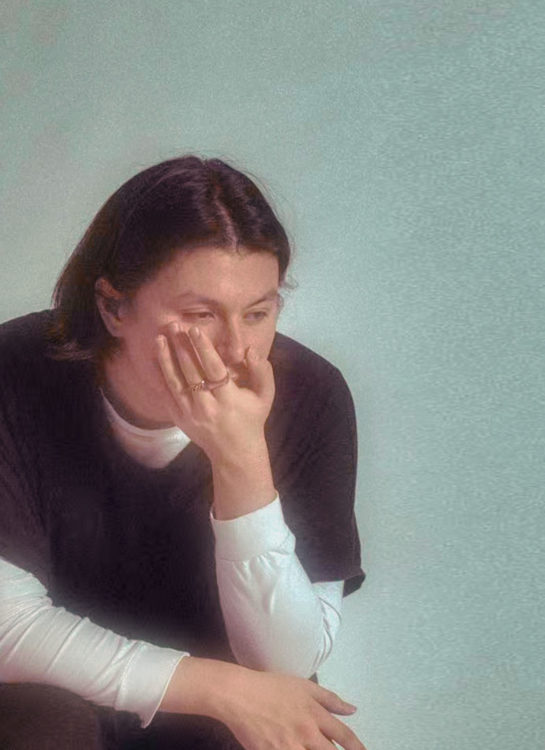 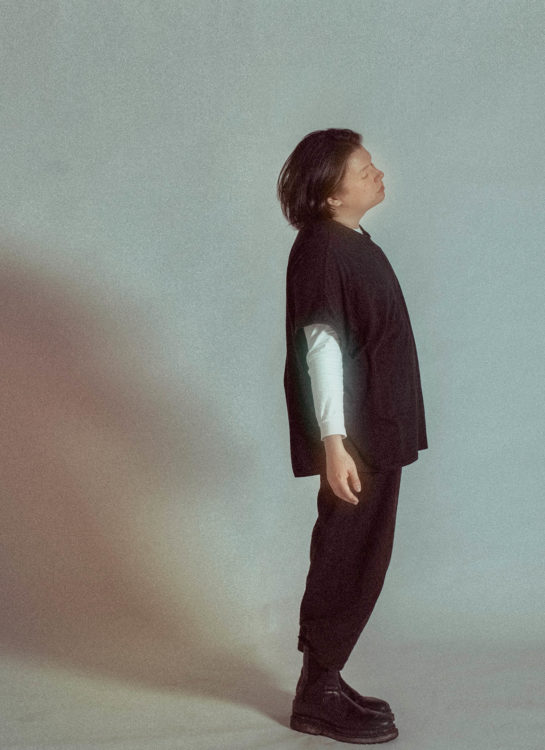 What does a great musical collaboration look like to you?
I think just authenticity and having both worlds meet in an exciting way I guess? I mean me and Struan have collaborated on every song I have released and we try to both bring what we can offer to the table and it’s just fun and exciting. I think it shows in the music too I don’t want to be boring.
How did you arrive at the theme of addiction for this new EP?
I was finishing “Dopamine” at the time, and that song is about being hooked to someone, and having that electric life affirming feeling. It’s really positive and anxious but also  fearless at the same time.  I wanted to write a song that had that electric feeling but the narrative is darker and more sinister. Sometimes intense bonds are really difficult to break. I’ve experienced some of that chaos in relationships and I wanted to put that in a song.
You pull influences from all over the music world, from Kanye to David Bowie. Do you ever feel any contradiction in the different genres these embody, or does it all seem natural?
I love colourful music! In my life I try to learn from everyone. For example my first EP I draw inspiration from Bach to Kanye, and this EP Im drawing from Bowie to Kevin Abstract. It’s just me and my friends being music fans and wanting to express ourselves to the best that we can. My favourite Bruce Lee quote is ‘Empty your mind. Be formless, shapeless, like water. You put water into a cup, it becomes the cup” and I think it’s such a beautiful philosophy with every creative endeavour. Limiting yourself to a genre can really hinder your growth!
How are you feeling about the prospect of putting together a live band and getting touring?
I have started preparing with my band, I’ve got my crew and I am dying to perform once it’s safe and responsible! I think it is really frustrating with the pandemic but obviously I don’t want anyone getting sick because of my music or live shows etc so I am waiting for the apocalypse to end and I can vibe out with my friends! I have so much more music to put out, I have been writing like there is no tomorrow.
What’s inspiring you creatively right now?
Kindness, forgiveness, Elliott Smith, David Bowie, Bruce Lee, my dog Angela, Bill Hicks, my best friend Struan, Shanghai,  my beautiful parents, and people that listen to my music.
What are you manifesting for 2022?
Honestly last year was a bit of a shit show, I had too many expectations for 2021 and I ended up burning myself out. So now I am just grateful everyone in my life is healthy and I have so much more music I can hopefully share soon.