Lav creates slow, stirring dream-pop that’s best described as a mix between early Billie Eilish and Audrey Hepburn’s “Moon River.” The result is entrancing and heartbreaking all at once. But to truly understand the bittersweet resonances in Lav’s music, you must first learn her story.

Raised in Venice, California in a busy one-bedroom house by her grandparents and single mother, Lav was surrounded by blues and funk (it comes as no surprise that her grandad was a blues musician). This early education opened Lav up to an array of vintage, jazz-influenced sounds, and she was thus drawn to the warm yet mysterious vocals of Peggy Lee and Julie London. Music, poetry and books became a safe haven.

Derailed by panic attacks and agoraphobia as a teenager, Lav upped sticks to Utah for treatment and when she graduated, got engaged – but it wasn’t happily-ever-after. Under the spell of her controlling partner, Lav’s dream to pursue a career in music was forgotten as she instead went to college to study criminal psychology.

Luckily, Lav saw the light and dumped her controlling partner, quit college, chopped off her blonde hair, dyed it black and “got a bunch of tattoos.” Yet, in her new, badass form, Lav still didn’t pursue music, turning instead to social media, where she swiftly racked up 200,000 followers for “making edgy jokes on Twitter” and being an “over-sharer” on TikTok. One sleepless night, however, everything changed when Lav wrote and published “From Me, The Moon” on GarageBand. By a stroke of luck, Billie Eilish heard the track and shouted it out to her fanbase. You can imagine what happened next.

Now, Lav has over a quarter of a million monthly listeners on Spotify alone, and five songs under her belt. One of which is her latest release, “The Girls Before Me.” It’s marks a shift away from the ‘bedroom’ production she started out on, but nevertheless still captures the same dreamy soundscape as before.

We spoke to Lav about her new song and its accompanying visuals, her upbringing on “emotional music” and her love of Minecraft.

How would you describe your sound to people who haven’t heard your music before?

I think it’s a mixture of dream pop with some funk elements, really vintage sounds, sad girl music for sure.

You were mostly raised by your grandparents as a child. How did that upbringing influence the music you create?

With my papa being a blues musician, I grew up listening to real, emotional, melodic music, Love songs and poetry. I grew up with music being more a feeling than a sound, and I’m very grateful for music’s place in my childhood.

When you were younger, you used the arts as a form of escapism – namely through music, reading books and writing. Do you still seek solace in the same place today?

It’s harder now with influences like social media, I often find myself 8 hours deep into a YouTube bind, and I have claw my way out of it. I do still read and express myself through writing lyrics and poetry, but 4 hours of Minecraft let’s plays just always seem to hit the spot. 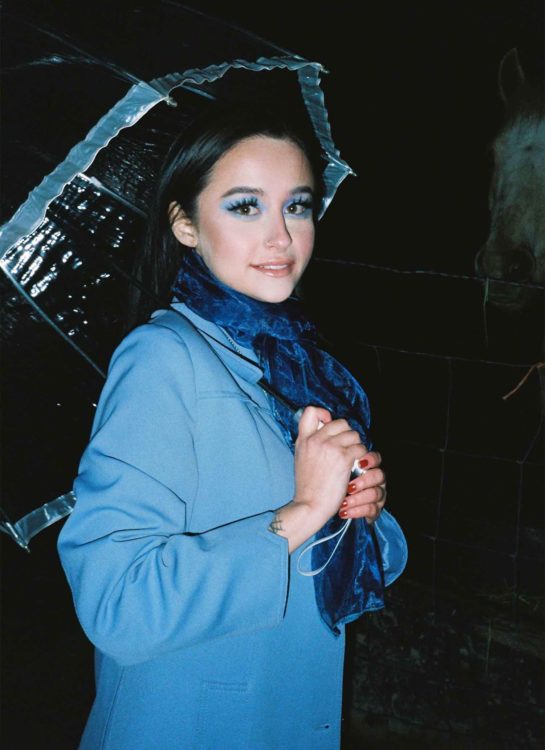 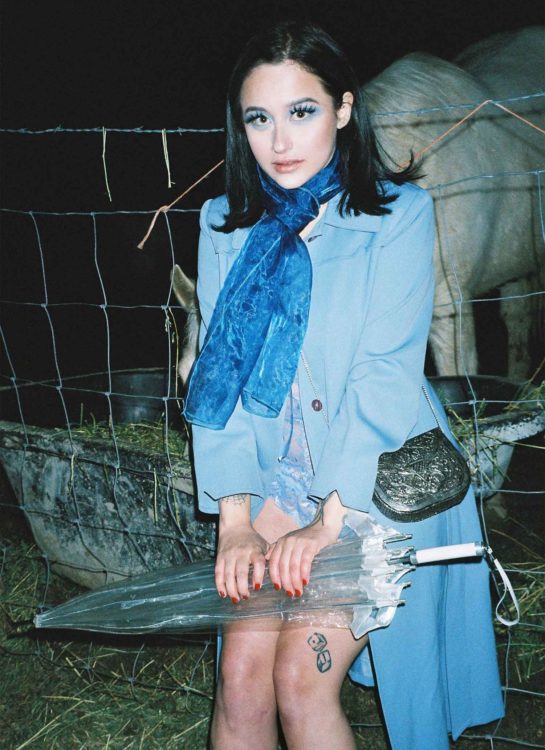 Your career was kickstarted on social media. Has it proved to be a double-edged sword in any way?

I think my place in social media has always been kind of chaotic and strange. To some people I’m still the girl making edgy jokes on Twitter, to some I’m the over-sharer on TikTok, to some I’m an artist, and to some people, I’m still an OnlyFans model. I think my place on the internet is so important though, as a woman with a documented past trying to make it in the industry? Not super heard of, and I think my generation is the first to navigate that.

Your first song “From Me, The Moon,” was written as a form of closure after a bad relationship. Do you believe music is an effective form of catharsis?

I believe self-reflection is the only catharsis, whether it be through music, art, writings or even having a conversation with yourself. Closure is a made-up thing, in actuality. “From Me, The Moon” saved me from going back to that shité relationship. I’d reread the lyrics and ask myself how long I could keep coming back to something that no longer served me, and also taught me a lot about my romantic relationship patterns and what I romanticize. Along with 378 hours of listening to Let Me In by Snowmine, I can safely say music completely soothed me through that process.

Give me a window into your creative process – how do you write a song?

I write quite a bit of poetry, and I collect phrases I like that I’ve heard through conversation, or other songs, etc…and I kind of just word bomb on a paper or in my notes app.  I’ll then find a chord progression or a melody I like and slap those puppies together. I wish it was more profound or some sort of spiritual experience but it’s just my ADHD forcing me to express myself in chaotic scribbling that I later paper mache into a song. 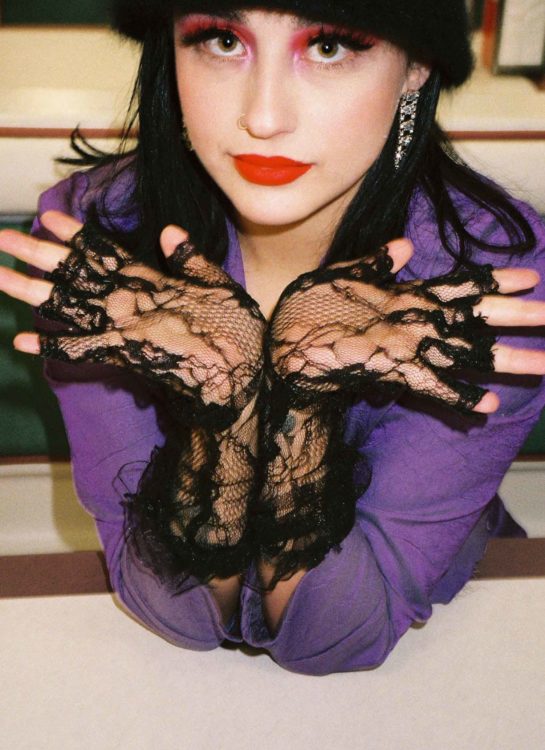 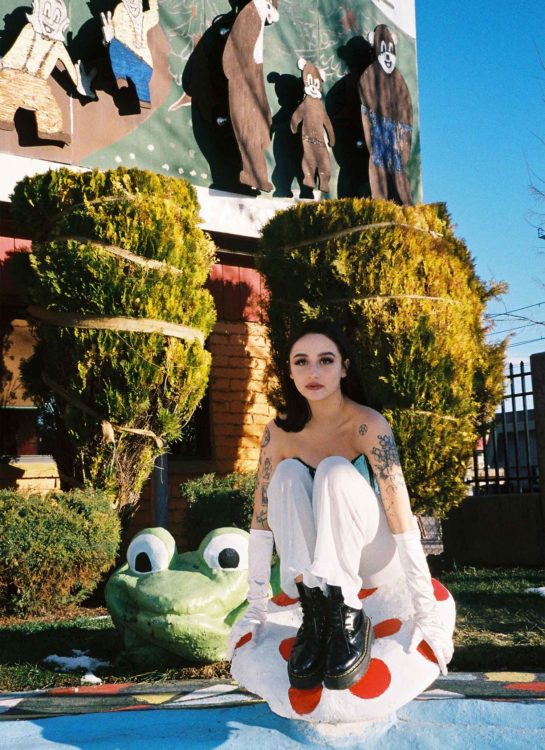 Your latest song, “The Girls Before Me” explores the outdated yet still prevalent tropes around women’s sexual desires. When writing it, did you set out to help other people work through the same situation?

I definitely didn’t write it in any motivation as I don’t really write for anyone but me, I wrote it out of mostly frustration and then realized after adding the music that I was empowered by the whole situation; in hindsight. I’m always gonna be an advocate for sluthood but I never want my intentions with the message to be explicit because I want people to take what they want subjectively through art. Also, I think as millennials and Gen Z, we have the power to really rewrite those tropes entirely and I just ignore anyone who disagrees because they’ll die out.

What inspired the concept for the music video?

I wanted to do something kind of strange and avant-garde. I’m inspired by elements of my childhood: old barbies, picnics, fields, hair curlers. And also of by the 60s! My ideal dreamscape is living in a trailer with my 6 kids and my boyfriend in the middle of Nevada in 1967.

What do you want to communicate about yourself through your music?

That my world and the world in general revolve around love and being able to connect with yourself and your feelings. Self-reflection is the greatest tool we have. Whether it be my sad songs about losing love or my songs about hoe-ism, it all genuine, and all elements of me, being a dynamic and complex woman.

What’s next for Lav?

Watch Lav’s music video for her latest release “The Girls Before Me” below: