In the year that saw the transition from pandemic-loungewear to the return of dramatic red-carpet looks, GQ have named their fashion front-runners for 2022. The list draws on events such as the Met Gala, bringing together established Hollywood stars with the fashion icons of the future. For the Most Stylish Man of 2022, Timothée Chalamet came in at number two, getting a special mention for his gold-silver lamé Tom Ford suit at Cannes Film Festival.

Musicians were well represented on the list: Skepta fell behind Chalamet, as did Frank Ocean, Harry Styles and Tyler, The Creator. Androgyny was the order of business, as GQ describes how this year Styles became “even more sure of his own aesthetic universe”.

A cultivator of his own brand of androgynous styling, it was Lil Nas X that topped the most stylish male list. Trailblazing as one of the first-openly gay rappers in hip-hop, GQ quotes Donatella Versace herself as championing Lil Nas X’s self-expression: “I love how he keeps breaking boundaries through his music, through his videos and with his style choices. He is truly daring and not held back by trying to please everyone.” It’s not surprising then, that looks such as his Met Gala three-layer gold Versace armour earned him top position.

On GQ’s most stylish women of 2022, there was a mixture of relative new-comers and established trendsetters. British musicians Arlo Parks and Griff were praised for their epitomising of Gen-Z dressing, and a special mention went to Griff’s full creative control of art direction and styling in her videos. The fashion influence of the Kardashian-Jenner clan reigned supreme however, and Kendall Jenner’s versatility saw her take top spot. 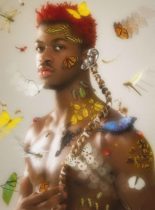