A fun, rambunctious new single from Lime Cordiale and Idris Elba has landed, ahead of their 'Cordiale Elba' mini-album dropping soon.

For fans of Arctic Monkeys, Babyshambles and The Courteeners comes this surprise new single from duo Lime Cordiale and actor, DJ, and now singer, Idris Elba.

Filled with rollicking drums, indie-rock guitar riffs and Elba’s gravelly vocals, it’s hard not to jam along to the collaborative new tune.

“I had this song title written down in my notes for a lyric. It was a concept we’d been toying with for a while but Idris related to it and wrote these verses in the room with us. He told us about an industry party the night before, about people looking over his shoulder searching for someone more important to talk to until they worked out they WERE talking to someone important”, explains Oli of the song.

“That’s where the song started but we’re really just taking the piss out of ourselves, something that we all loved doing in these studio sessions. It’s that Aussie/English connection,” adds Louis.

“It’s a song about finding who you really are and not chasing who you think people want you to be. It is a driver’s seat singer classic, “ says Idris of “What’s Not to Like”.

Lime Cordiale and Idris Elba first started collaborating when Lime Cordiale asked if Elba wanted to guest on a new version of their song “Unnecessary Things”, a track that first surfaced on the ‘Relapse’ reissue of the duo’s No.1 album ’14 Steps To A Better You’ from last year. Idris was instantly sold. “I listened to them on Spotify, fell in love with them very quickly,” he tells. In fact, the trio have had such a great connection that they’re set to release a mini album, ‘Cordi Elba’, very soon.

Hear the track below: 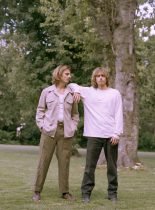 We catch up with the Aussie brothers 'from the same mother', Lime Cordiale, who are riding the waves of creating some of the most interesting and addictive surf pop-rock.