One special piece of news that dropped this week has got us feeling festive already: Leigh-Anne Pinnock from dominant girl group Little Mix will be ascending to the screen for her first movie appearance in the film Boxing Day.

Playing Georgia, the ex-girlfriend of lead character Melvin, Pinnock’s role has been compared to “Julia Roberts from My Best Friend’s Wedding or Notting Hill”.  Her ex-boyfriend Melvin is taken on by I May Destroy You‘s Aml Ameen, who is also the writer and director behind Boxing Day.

Talking to Digital Spy, Ameen explained: “I wanted someone with the characteristics of those roles. I was looking for someone who could sing too. My writing partner, Bruce Purnell, said that I had to check out this girl and showed me Leigh-Anne. I didn’t know Little Mix at the time.”

“One of the casting directors got in touch with her, and she filmed a tape. When I watched it, I saw something incredible in there. Now I know her really well, and she’s one of the most wonderful people I’ve ever met in my life.”

The festive feature film will also be the UK’s first Christmas-tide romantic comedy with an all-Black cast.

Ameen added: “If the world stopped tomorrow and we only had Black British cinema to tell us what Black Brits were like, would it be one particular lens of a particular culture? London is one of the most diverse places on the planet, and showing that was really important to me.”

“I love Love Actually, I love Notting Hill, I love My Best Friend’s Wedding, Crazy Rich Asians, and My Big Fat Greek Wedding. I wanted to add to those stories, and give my personal adage to a genre I love so much too.”

Boxing Day will be released in UK cinemas on 3rd December. 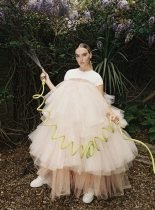 After eight years as a quarter of the biggest British girl band since the Spice Girls, Perrie Edwards graces the second cover of Notion 84 and talks mixed emotions, freckles and finding happiness with her Little Mix sisters. 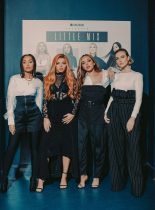 The quartet mark their return with a live performance in collaboration with Apple.