Revered not only for her skills on the decks but her production and music-making capabilities, fast-rising artist Gina Jeanz is a force to be reckoned with. Her debut album ‘Lucid Theory’ follows from three EP’ in the last two years that have garnered attention globally. With the new album, Gina delivers an electronic music masterclass, supported by African vocalists such as Sio, MOONGA K., Brad Knight, Jordan Baker, and AliThatDude. The result: an immersive journey that spans genres from deep house to progressive R&B and alternative soul.

Thematically, ‘Lucid Theory’ centres around deep emotions, Gina seeming to channel and unpack her own experiences through the tracklist.  Songs such as ‘Overstimulated’ and ‘Sunspot’ cover tumultuous relationships, ‘All Of Me’ conveys the pain of unrequited love, and ‘100ml’ tackles Gina’s personal experiences with anxiety. It is intensely personal, and the lyrical honesty and vulnerability are furthered by the fact Gina produced and composed every song on the album. Gina has discussed her own “battles” that became the foundation for the entire project. In a period of uncertainty, she felt being able to produce her own music bought her “so much healing”.  Music offered a space to be her “true authentic self without thinking about it”.

Born and raised in Namibia and now based in South Africa, Gina also counts herself as one of the few female producers across the African music scene.  This fact drives her passion to uplift and empower more women in the music industry through her own hard work. During the pandemic, she collaborated with Red Bull, made two EP’s, and recorded her debut album. At the rate she’s going, we can’t wait to see what’s next.

Stream the album below: 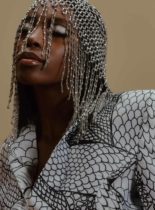