With her rich vocals and poetic aptitude, Mali-Koa offers an open hand to her listeners through self-reflective analysis and emotional vulnerability in her music.

The word dedicated does not do the Australian singer-songwriter justice when describing her work ethic. The older sister of 5 Seconds of Summer’s Calum Hood; Mali-Koa’s love of a well-written song shows in her catalogue work, with each track steeped in authentic and emotional relevance.

Everything that Mali-Koa does is considered and this extends to her online presence. Keeping that window of communication open with her loyal fanbase, the singer uses her platform to provide support. As well as a vector for open and honest discussion about current news and socio-political issues, as seen with her discussions on race with figures such as Temi Mwale of ‘The 4Front Project’ and Michelle Saahene of ‘From Privilege to Progress’.

Her abundance of energy and commitment is enviable and for many of her fans, new and old, the singer provided a lifeline both in her art and her interactions during the unprecedented time many of us are still trying adjust to.

Undaunted by the Covid-19 pandemic and subsequent lockdown, she adapted to the uncertain times. Releasing track after track, from the infectious and uplifting ‘Dancer’ in March to the poignant, softer cover of the Robin S, Ministry of Sound bop last month and organising a multitude of Q&As and livestreams for us mere mortals, Mali-Koa has kept us going.

Now, the singer is set to turn things up a notch with the release her latest single “Revolution” this month ahead of the release of her highly-anticipated debut album in November. 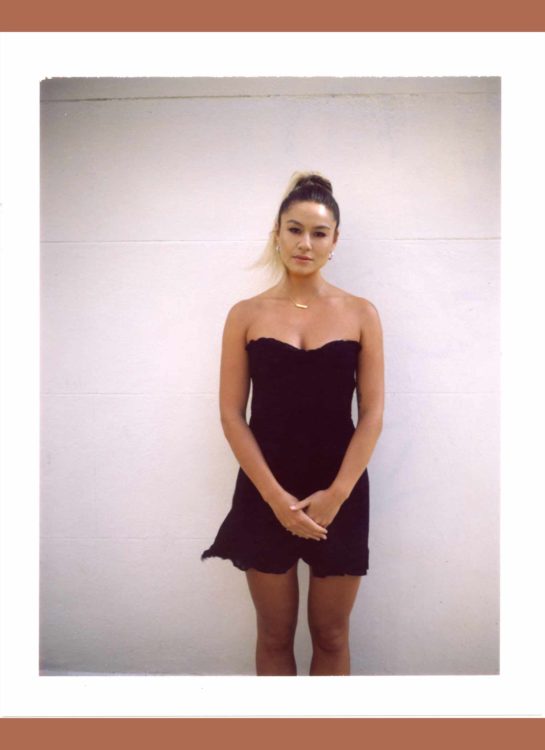 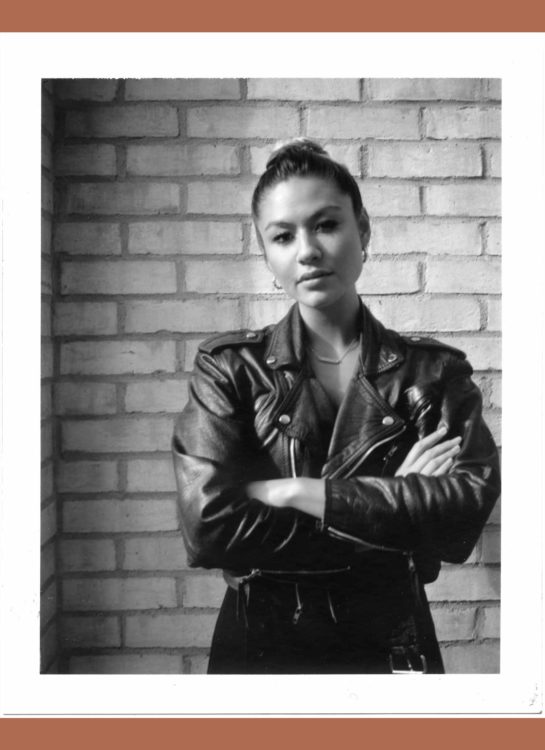 Did you always want to be a musician?

I always knew I loved music and hoped to be able to make something of it one day. I had no idea I’d end up writing songs and telling stories, but it now does feel like it’s all I’ve ever known somehow.

You have described your music as a by-product of stepping out of your comfort zone. How does this help your process?

It’s all very introspective and whether that’s looking at love or life – my music is influenced by these complexities of what it is to be imperfect but human. It’s not like I’m doing anything that people think “Woah it’s out there and weird, or I’ve never heard that before”, but more so “Oh, that’s heartfelt and open and raw and honest”. I feel like maybe the world needs a bit of that right now.

You first began releasing music in 2018, how much have you changed as an artist since then?

Some artists are born with something to say and others have to figure out what it is they believe in, in order to say it. 2018/19 was all a part of that decision making process for me as an artist. I’m writing different songs now, I do feel like they reflect me more accurately. They’ll probably continue to change and develop as years go by, but I feel like that’s part of the process too.

You kept creating music through lockdown. How important was it to do this?

I think it was a big part of my sanity check! Every day I had the opportunity to create and focus on writing songs for other artists and planning this record. I felt really grateful to have had a sense of purpose through lockdown.

You’re constantly communicating with your fans on social media and having discussions with socio-political figures such a Michelle Saahene from ‘From Privilege to Progress’. How important to you is it to use your platform in this way?

Michelle in particular and her initiative ‘From Privilege to Progress’ really helped me to feel like I could participate in the global conversation and form an opinion free of judgement. I was so grateful for that.

I made a conscious decision to write more thought-provoking and heartfelt songs, songs that said something and meant something. That was always important to me. Guess it came from knowing and loving artists like Bob Dylan, Joni Mitchell and anyone Woodstock era. 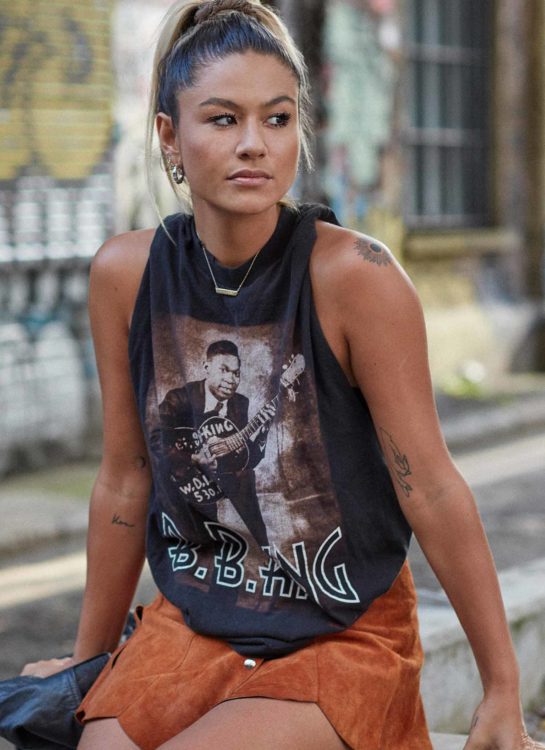 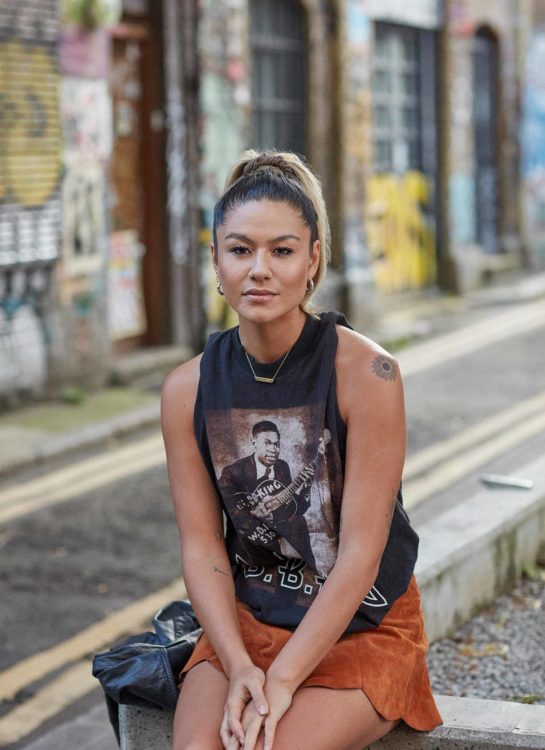 “Revolution” is your upcoming single, out next week. Why did you want to create this track?

It was one of those songs I didn’t know I needed but knew that it was special. It came from a writing trip to Sweden last year in March. I remember taking in the title Revolution into the session with Par and Professor P and it felt really powerful, but we spent a bit of refining time working on how we were going to make something so big a concept feel personable and relatable. I wanted to create it to stir something within, courage perhaps, that sentiment still rings true.

What was it like working with Onree Gill and Ella Q on this track? who have worked with Alicia Keys ad Prince, respectively.

I mean when they listed off the credits between them two, I could’ve cried (happy cry). I felt so humbled to have them across it all, Onree couldn’t have made me feel any more valued as an artist and that in itself is something so special. I know he works with everyone and is a living legend, so to give me and my song the treatment they did – I was so grateful. Plus, it’s probably the best full sounding song I’ve done to date and I’m really proud of it.

Why was it important to create your track “Show Me Love”?

“Show Me Love” was a song that I grew up with, I’d always loved it. There’s actually a video of me on my school bus singing along to the Robin S version when I was 17, saying “this is my song” that resurfaced on the internet the other day. The storytelling in it is really poignant, it’s a beautiful sentiment and the lyrics are romantic. I just didn’t feel like they had their moment yet, so I wanted to see where that would go organically.

“Me Before You” pays homage to what once was and it works as both a melancholic and uplifting song. How important was it to include these, sometimes opposing, elements?

I think some of the best songs make you want to dance and cry simultaneously. That kind of feels like life to me, those juxtapositions in your day or in your emotions. When one thing is great and the other not so great, or when you act one way but feel another. That’s what keeps us on our toes.

Are you excited to be releasing your debut album in November? What can we expect?

Kind of freaks me out that time is so unstoppable, I’ve only just gotten used to the summer. I’m really excited for the record, I’ve been working towards it and it’s a culmination of perseverance and change and hope – personally and also in physically creating it. It’s a conversation and every song comes from a place of love, so I hope people can relate.

Listen to Mali-Koa's latest song "Show Me Love" below: