The stars have always been in alignment for Sydney-based duo Cat and Calmell. Born in separate parts of the world, the pair crossed paths at an after school program for developing artists in Sydney which marked the beginning of their budding friendship and music career. By splicing together their broad spectrum of sounds and influences they are able to make music that radiates their confidence and freedom of expression.

The duo first entered the scene in 2020 with their single titled “Dumbshit” which bagged them the attention of mainstream press alongside their closely connected yet global fanbase. Steeped in their glittery R&B vocal tones and alternative pop instrumentation, their music is the perfect soundtrack to our teenage years.

Peeling open another layer to their sonic dimension is their second single, “dramatic”. Directed by Louis Brandt, the video is set in an asylum where we see them attempting to escape numerous times but aren’t met with any luck until the very end. Their punk-inspired outfits, loaded lyricism and the delicacy of their voices pin them as artists who consistently deliver anthemic bangers and who also have a lot to say.

From the underbelly of the Australian pop scene and steadily making their way to the global stage, Cat and Calmell are a duo that we just can’t get enough of. Speaking to Notion, they share the story behind their new track, how they work together creatively and moments they find themselves being dramatic. 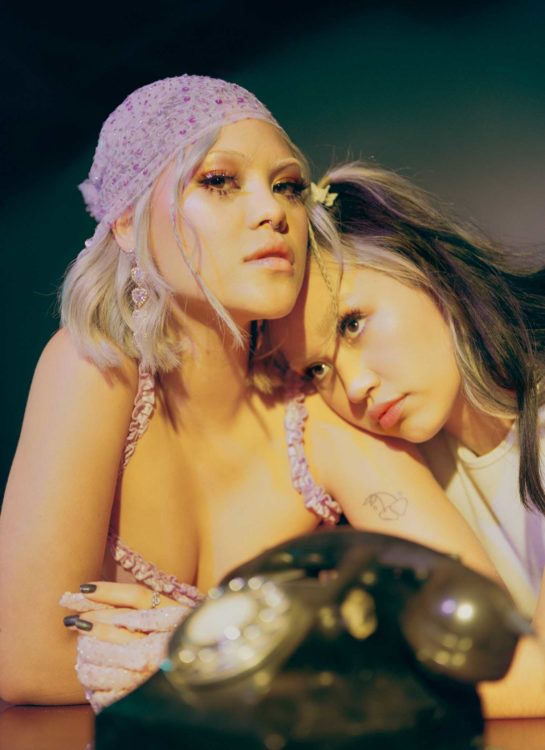 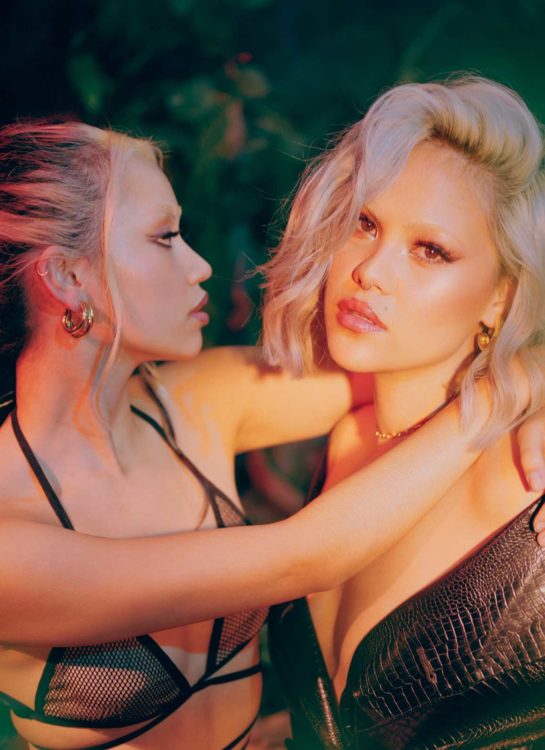 How would you describe your sound in three words?

What was your first individual experience with music?

Cat: I would lipsync hit me baby one more time by Britney Spears (arguably not the most appropriate song for an 8-year-old but hey) in the living room and charge my family $5 each to come watch, I’d stand on the coffee table and give the performance of a lifetime, at that point I didn’t know music could be an option career-wise but what I did know was that I loved the attention.

Calmell: My first experience with music that i can remember is singing and dancing for hours to Nikki Webster on a So Fresh disc and The Bee Gees until I passed out :p According to my mum, I’ve always been dramatic since I was a kid, hence why she put me through musical theatre and such for YEARS. definitely contributed to my character development hehe

Coming from different parts of the world, how did you know that you had to work with each other to form this duo?

Cat: Having spent most of my life moving cities or countries every 2 to 3 years I never had a childhood best friend, I’d make close friends but would never get attached because I knew I’d have to leave, after moving back to Australia I met Calmell and we formed a friendship that neither of us had had before, honestly, I always joke that we just have codependency issues and always do everything together anyway, so being a duo was really a no brainer :p

Calmell: Having come from very different backgrounds – Cat moving homes all over the world during her childhood and me staying in Sydney my whole life, she’s taught me so much and helped get me out of my comfort zone and I hope I’ve done the same for her. Both our dynamics just worked so well the moment we became friends. So what better way to start your career than with your best friend

I read that your first single ‘Dumbshit’ was written around two years ago. When do you feel like a song or project is ready to be released?

Cat: Full transparency, I’m ready for a song to be out as soon as it’s done because I get so excited and just want everyone to hear it, but the reason it took us so long to start releasing music is because, when we wrote “dumbshit”, Calmell and I had no idea what we were doing, we were new to the music industry and I was still in high school but we knew we wanted a team and a support group that we felt comfortable with and that believed in us, we’re very lucky to have found that and as everything fell into place, we’ve started putting music out! And we’ve got a loooot more on the way <3

Calmell: Cat and I get way too ahead of ourselves when writing a song- it wouldn’t even be complete and the video plot & outfit references would already be discussed and LOCKED IN. However, it did take us 2 years to release “dumbshit” because we were still trying to figure everything out from our sound, our look, our message. We ended up getting to a point where we mutually wanted to put out whatever feels right at the time and we’ve got an amazing team that supports that. We have and will always be fully transparent with our listeners and our supporters about our music and be completely real 🙂

The video for “dumbshit” feels like something from a coming of age movie. What are your visual inspirations?

Cat: Ahhh that makes me so happy! For “dumbshit” we definitely took inspiration from shows like “end of the fucking world” and “euphoria” which are very coming of age. We’re obviously obsessed with aesthetics and exploring what it means to be a teenager/young adult of our time, from fashion to the media we consume and a lot of it honestly comes from TikTok, it’s a platform that is more accessible to creators than any other in helping them find an audience and it’s been a well of inspiration on our creative journey as well.

Calmell: Ahhh that is exactly what we want for our videos!! We’ve pulled some visual inspo from shows like end of the f*cking world to Euphoria while still sticking to who Cat & I are. We want our videos to be a cinematic experience for the viewers and keep a very narrative strong story! 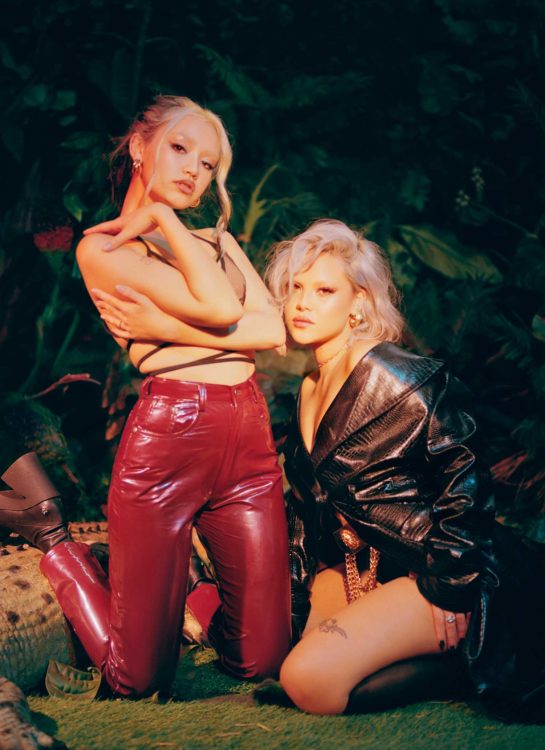 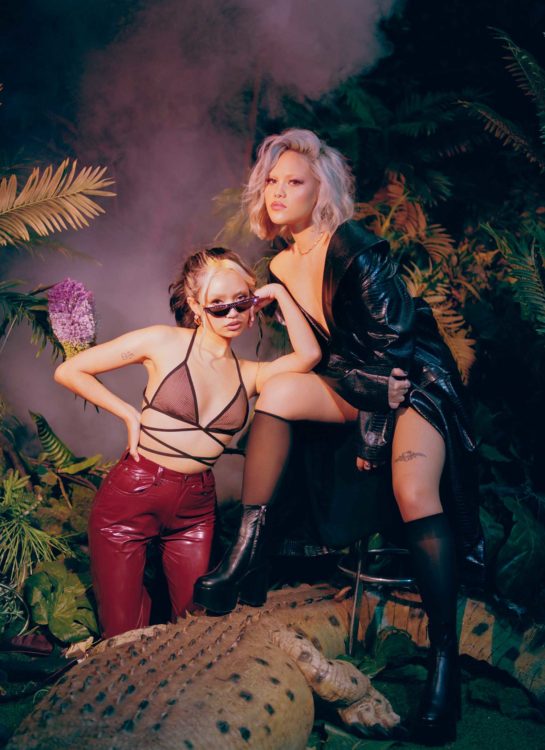 When working together, how do you settle any creative differences you may come across during the process?

Cat: I think us being best friends to the point that we may as well be sisters before we ever started working together meant there was no competitiveness or egos in play, I’m just a very honest person and can’t lie about how I feel or what I’m thinking, Calmell being best friends with me had to get used to that pretty quick and we created a friendship where we felt we could be completely comfortable and honest with each other without feeling attacked because we knew everything came from a place of love for either each other or whatever we’re working on, so truthfully, we haven’t seriously butted heads on any of the projects we’ve worked on so far, knock on wood, it also helps that we are essentially the same person.

Calmell: Most times if not all the time, we agree on all creative choices going into our music/videos! But if we ever get to a crossroads we try to just meet in the middle.

How would you say your perspectives differ?

Cat: I think in general we’re pretty like-minded! But I would say that I have always held a more long term goal orientated perspective and Calmell has always been more short term. And I think that really works for our dynamic! She reminds me to just be in the moment and in turn I also nudge her to remember the big picture, we just complete each other like that.

Calmell: Considering Cat and I are literally the same person, our perspectives aren’t too different. Throughout our friendship Cats always been super headstrong and I’ve been a lil more of a loose cannon but she really keeps me grounded and has been my anchor through the early stages of our career and I hope I’ve helped her to be more in the moment and not take things too seriously.

Congrats on the new single “dramatic”. What is the story behind this track?

Cat: Thank you so much! It’s honestly one of my favourites, we wrote this one with Hauskey during a time where we were doing late-night sessions at his studio and we would just talk for hours and in a state of exhausted delusion write songs, this particular night we were talking about the climate crisis and the response of largely old white men in power to the younger generations efforts in getting them to recognise and do more about the issues at hand. We were feeling really helpless and honestly a little bleak about the situation so we wrote this song as both a cry of frustration and a middle finger, sincerely,  from our generation to theirs.

Calmell: Thank you! This song is definitely one of our top favourites. We wrote it one night with Hauskey, a really special friend/producer. The night we wrote ‘Dramatic’ we were feeling particularly vulnerable and were talking about the climate crisis, the people in power and their complacency with the issues at hand. We wanted this song to be able to reach our younger audiences who might be scared or confused by the current situation as ultimately we’re all affected.

What’s one thing you find yourselves being dramatic about?

Cat: I would say i’m most probably the chillest person you will ever meet and there’s not much that can get me stressed??? I bet if you ask Calmell she’ll disagree and be able to make a long long list for you hahaha but i can’t think of anything right now!

Calmell: I am definitely the most dramatic out of the 2 of us lol. I can honestly be dramatic about anything but I think getting out of bed, I can make look like the hardest task ever

What can we expect next from Cat & Calmell?

Cat: We’ve got a lot of songs in the bank and are hoping to put out an EP this year! But before that, a couple singles that we can’t wait for everyone to hear.

Calmell: We’ve got a couple more killer singles that we worked on in 2020 as well as an EP! We want to tell a story with our music and music videos so we hope to achieve that with our upcoming project and hope everyone loves it.

Watch the music video for "dramatic" below: