Raised in Reading but now based in East London, the twenty-six-year-old has been a Londoner for the past six years but still talks about the energy behind the city, with a sense of awe only tourists have. But it’s in that innocence, mixed with gratitude that makes Dan D’Lion intriguing, to begin with. Dan D’Lion is not scared of vulnerability. If anything, it allows him to remain open in his words, the beats and production behind his songs so none are
alike, all while remaining focused. “Freeing” is how I’d describe Dan D’Lion but never purposelessly messy.

When we speak for over an hour, interlacing memories of his childhood growing up in a household with both Buddhist and Christian teachings and having parents that were both in bands— even when he was a foetus he found his way on stage—it’s clear that Dan Bartlett is a learner. Of music, of emotional intelligence and the picture of his life.

Citing Jamiriquai, Elton John, Gorillaz as his influencers, with his teenage years consisting of Rage Against The Machine and from his father’s influence, Herbie Hancock, Weather Report and Coltrane while his mother enjoyed Pink Floyd and Stevie Wonder, eclectic has been his musical makeup. Nowadays,
Dan lists artists such as Gabriel Garzón-Montano, Omar Apollo, Steve Lacy and Dijon on his playlist.

Personal is what’s key to the musician. Though he calls Dan D’Lion a bravado, even a character, the artist says “Dan D’Lion to me is the absolute extreme each end of the spectrum of who I am as a person” therefore the core of Dan D’Lion is an amalgamation of everything Dan Bartlett is. 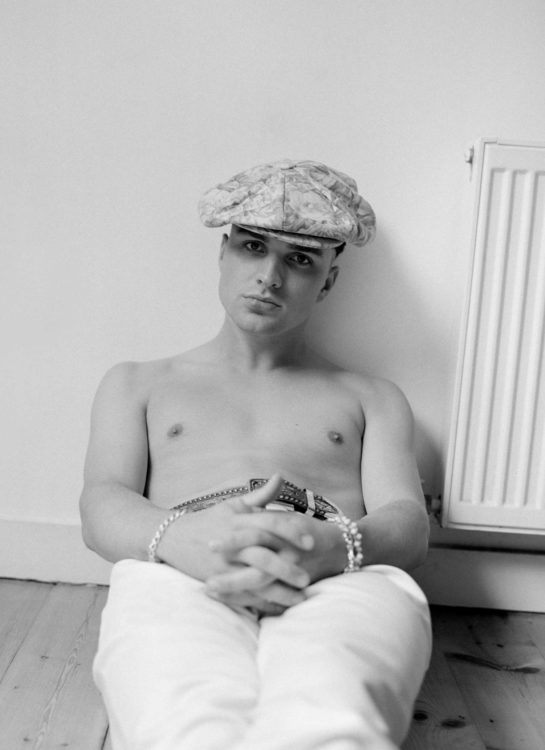 When I listen to your music, there’s something joyous about it, is joy an element you think about?

100%. That’s a beautiful word to use. I’m all about embracing the positive side of my mind and I want to bring a sense of joy to my music.
I’m also a big believer in energy. That’s why I love living in London—there’s just so many people here and when that comes together, that energy is what works for me.

Would you say you’re spiritual?

I am spiritual to an extent. My dad is a spiritual person and I think I got that from him. He’s also a jazz drummer. Growing up, religion was openly displayed to me as something I could divulge in. My parents were quite open with the route I wanted to take and there was an infusion of Buddhist morals from my father’s side and Christian beliefs from my mum. But they’re both very musical and that was put onto me as a religion as it were.

It might sound cliche but I really do remember this. When I was four or five years old, we were in the kitchen and my dad got out all the pots and pans—perhaps there were drum sticks and me and him were just jamming and that was the first time I felt like I had some sort of rhythm. It’s a blurry memory but I distinctly remember that being the first memory of my music really. My parents have always said that I
was singing and humming as a loud baby and always try to sing along to things. Basically, when I was younger, I was a bit of a show-off so I think it was basically that. Music has always been a part of my everyday life.

Has there been a song that’s helped you get through 2020?

Lianne La Havas’ self-titled album is an absolute dream. I’m on my 10th or 11th lap of it. It’s honestly, in my eyes, the perfectly written album. The songs just flow into each other. So much beauty in her lyrics and hides absolutely nothing.

What’s a genre of music we wouldn’t expect you to enjoy?

I love a theatre song. A Mary Poppins or The Lion King. You’ll find me singing my heart out to a classic theatre song – if I don’t think anyone’s around. I probably shouldn’t have said that. 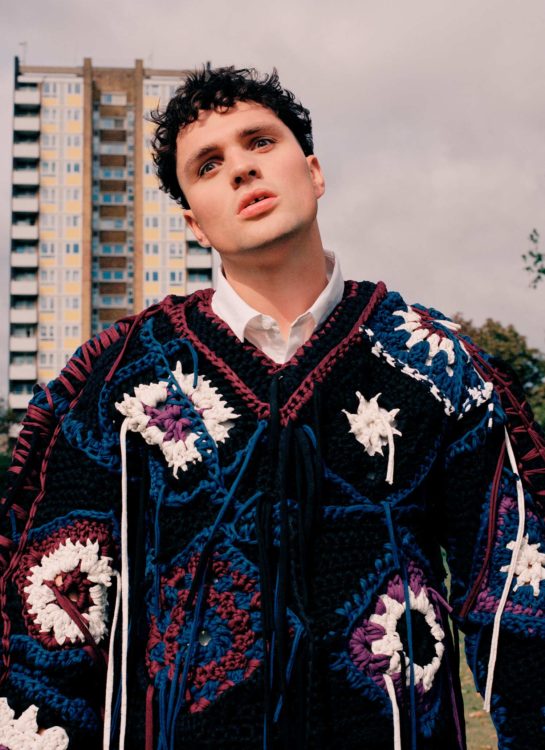 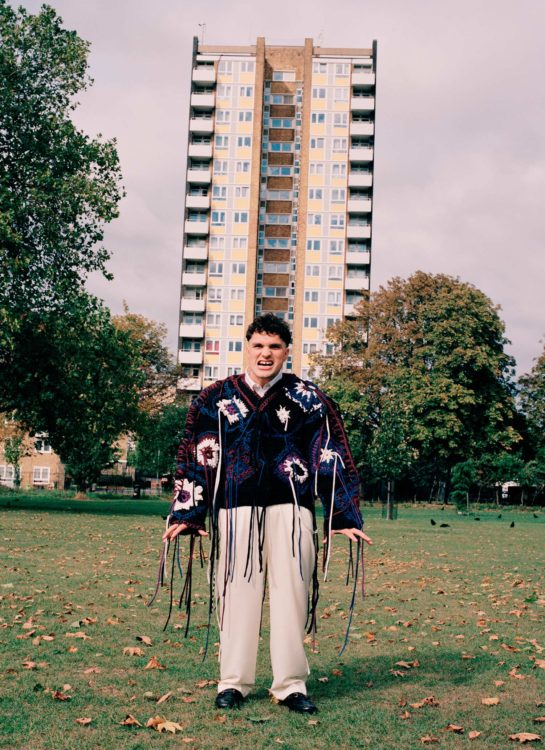 How do you describe your sound?

From the get-go, I’ve always wanted to keep the parameters as far and wide as possible when it comes to my music. I
didn’t want to box into any particular genre. I wanted it to be as free as possible. There’s obviously some soul influence, some pop techniques and a funky side of it with electro coming into the production recently. I want to be able to think freely and create freely without having to think about where I fit in. Some of my favourite artists have been Pharrell and Justin Timberlake, just because every record is a different spice using an assortment of flavours.

Why is disco so important to you and your music?

I never really mention the disco but when we’re creating in the studio it always comes up. Maybe it’s from that Jamiroquai/Earth Wind & Fire influence but I want to be able to have a side of me that’s extroverted. The one that’s loud and full of energy while also maintaining that part of me that’s introverted, that takes that time to look inside and write. It just depends on which side I wake up on.

Are you a Gemini?

No, I’m a Taurus baby. Aquarius rising if that means anything.

Ah I’m an Aquarius! Most of my best friends are Taurus’.

Well, there you go.

Back to talking about the freedoms within your music, how important is it for you to not hide anything in your music?

I relate to musicians and artists who are completely honest. Even if there’s a personal story in my life that I haven’t told anyone, I find a freedom in being able to write that down, even if that is in an obscure way. I’ve never seen my dad cry before but when I played him “Talk No More” from my first EP, for the first time in my life, I saw him burst into tears. I think it’s because I couldn’t put it into words but I
could write it into a song and that was so powerful to me, for me to be able to share it with someone like my dad. Just to be able to talk without having to say anything. For me, it’s the most natural way to be able to say what I want to say, for me to be able to go to a piano and sing it and put it into context, even with chords or a melody, it makes more sense in my mind.

How has your songwriting evolved in the past few years?

I started off in bands so it was very collaborative but when I moved down to London, I decided to really focus on being a better songwriter and producer which led more to starting songs from a certain beat or certain sounds that were very production-based. That’s when I started listening to N.E.R.D and more hip-hop and disco. From writing and producing on different projects, it was great to be able to jump into someone else’s shoes for the day and I think I learnt a lot from that. From being able to write a song on my own and taking myself out of the equation and be able to see it from a different angle and then jumping back into it and being very honest. Having that kind of difference, almost like I’m writing a song with myself and with someone else in the room and hop between the two has been an interesting thing for me. 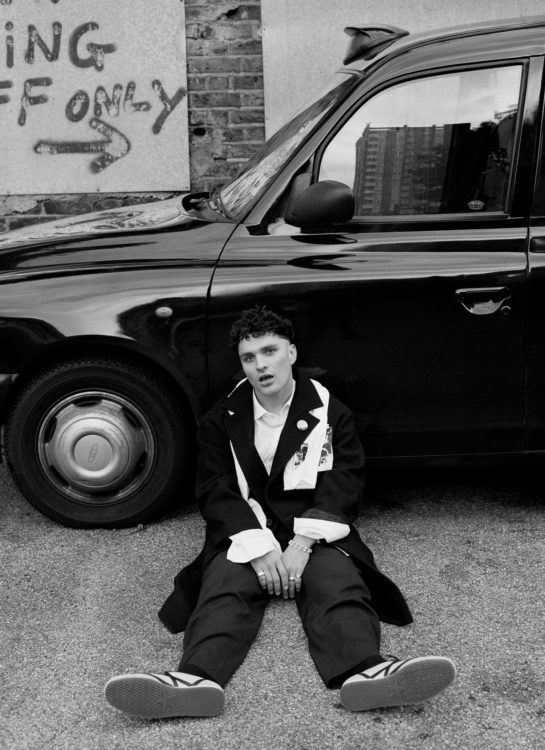 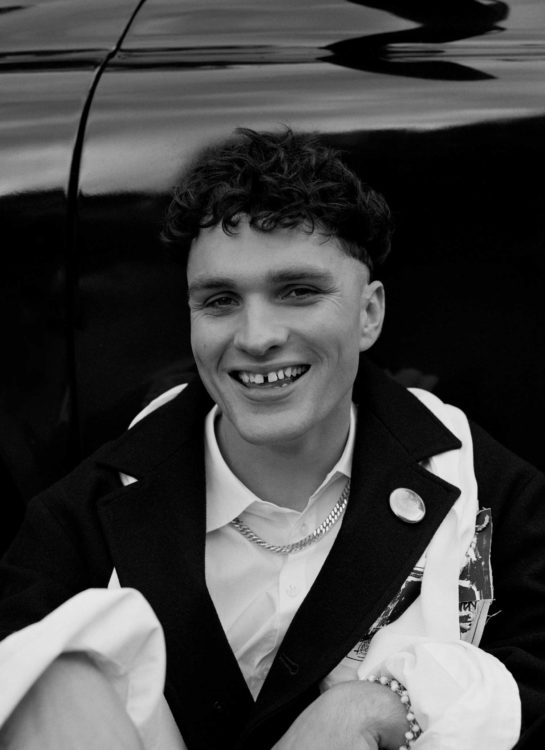 Is there a favourite song you’ve written recently?

“Lay Next To You” funnily enough was made after a session in the studio. I had an hour until the studio shut and it was maybe 10 o’clock at night and I wasn’t even thinking about what I was saying. I was just pressing the keys and wrote it in fifteen minutes. The next morning, I thought I don’t want to change any of this and I think it really captured a moment. If I had to pick a favourite, it would be that one.

What’s the best advice you’ve been given?

I think the motto I always stick to is “be the smallest fish in the biggest pond”. I’ve always tried to push myself into places where I might feel uncomfortable or the least experienced, least talented person there. But being able to learn from people who have been through a bit more is always what I’m after. I really want to be able to constantly and consistently grow.

Do you think if you’re constantly not growing, you’re stagnant?

If you asked me that question a year ago, I would have said yes. Having experienced this pandemic, I now take my time and let my mind turn off. So when I do create music, it’s more calculated and it’s not just for the sake of it. It’s been a real learning curve, finding the calm between the hecticness. When I see someone now, I don’t know how long we’ll go without seeing each other so I’ve started to really ask how they are and valuing what we have for sure. I find that on so many occasions when writing a song, sometimes it can be written in a day, sometimes it can’t be written in a week but sometimes it needs a month to flower into the thing it needs to become. Or maybe, I wasn’t supposed to write it when I thought I should’ve.

Oh thanks! For me, I was trying to think of a name for ages. I always wanted to be an artist as well as a musician, creator and writer and was trying to think of a way to describe everything, first using my name and describing my character. And it is that introverted/extroverted side of myself being this “Lion” character at some points and also, a dandelion in itself is a fragile thing. Also, it’s a bit stupid itself. I don’t take myself too seriously really.