Meanwhile, Working Men’s Club is also in the running for Best Independent Album, as well as tallying two other nominations.

On the nomination, Arlo Parks has said: “What an honour to be nominated for four AIM Awards!! This is far beyond my wildest dreams and I’m so glad my work has reached this far and touched so many, especially in these tumultuous times.”

Alongside artists, AIM Awards has a number of notable recognitions for those who have supported artists throughout the pandemic. Paulette Long OBE will receive the newly devised Diversity Champion award. Having worked on everything behind the scenes, from management to marketing, Long has been a key figure in the drive for equality.

The awards will also name those responsible for this year’s best releases, including Partisan Records, Transgressive Records, Forever Living Originals, Killing Moon, Strut Records, and Sonic Cathedral. Indie Champion award winners, for those who have given invaluable support to the indie music scene throughout its toughest year, include Bandcamp and Love Record Stores.

Radio 1 and 1XTRA’s Tiffany Calver and 1Xtra & 6 Music’s Jamz Supernova will be the hosts of the virtual ceremony on 25th August. The event will be free to attend. 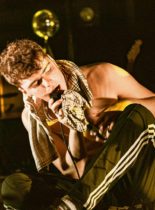