As one of the most exciting musical talents to come out of the UK, Laura Mvula shot to great heights during the start of her career. The critically-acclaimed artist has not only won an Ivor Novello Award for Best Album, but she has also been nominated for the Mercury Prize twice, BBC Sound Poll, the BRITs Critics Choice Award, two other BRIT Awards in 2014 and lastly, won an incredible two MOBO’s in 2013.

Laura has gone on to travel the world, selling out shows and captivating crowds at every destination. Crowned “Queen of the Prom” and given a five-star review from the Evening Standard for her Proms 2014 Late Night performance at the Royal Albert Hall, Laura’s critically acclaimed career has led her to work with real-life inspirations Nile Rodgers and touring with David Byrne.

Newly signed to Atlantic Records and entering a whole new chapter of her musical journey, Laura has been busy in the studio for some time. The ‘Laura Mvula Presents…Under A Pink Moon’ livestream will take place on Wednesday 24th February at 8pm GMT with tickets available now from lauramvula.com.

This will be Laura’s first live performance in three years and a taste of what’s to come. 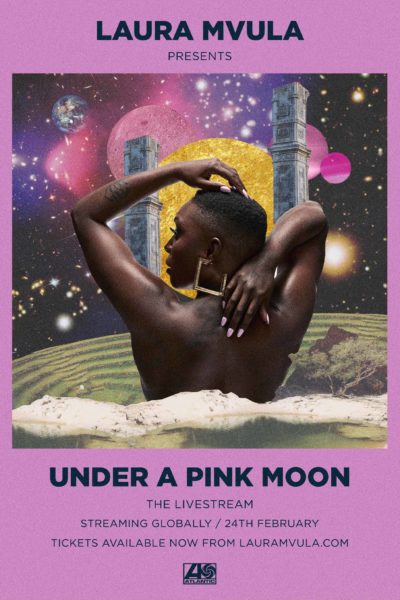