Heartless Crew's DJ Fonti is having a birthday bash on 22nd October and you're all invited! 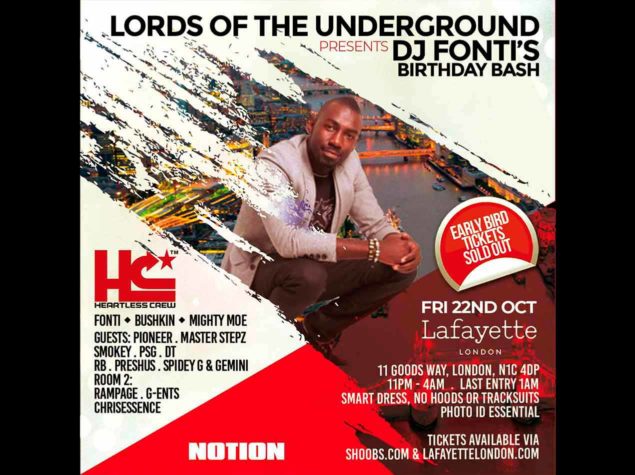 On Friday 22nd October, get your dancing shoes on and head down to Lafayette in Kings Cross for the hottest ticket in town.

The UK garage group, are throwing a party for member DJ Fonti, kicking off at 11pm and running all the way into the night, finishing at 4am.

Known for paving the way for grime music, alongside So Solid Crew and Pay As U Go, the iconic trio is made up of MCs Bushkin and Mighty Moe, and DJ Fonti. Active since 1992, the group joined the pirate radio station Mission 90.6 FM in 1998, which was responsible for pioneering a mix of R&B, hip-hop, jungle and dancehall derived sounds, taking its cues straight from the Jamaican sound system tradition, while adding fresh and modern elements from UK garage. You’ll surely know them from their 2002 banger ‘The Heartless Theme AKA “The Superglue Riddim”‘, which has been sampled many a time since.

Early bird tickets are sold out, but you can still get general admission via Lafayette and Shoobs.com