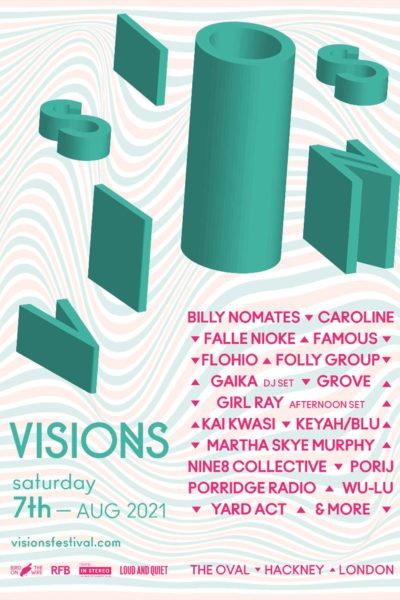 From East London and in its eighth year, VISIONS Festival boasts a stellar line-up of emerging artists, returning this time with a firm and vibrant community feel.

Though taking place in multiple venues, in 2021, VISIONS Festival will revolve around the Oval compound: this centralisation will lend the event a richer sense of community. Another change is that only UK artists will be invited to perform, in the hope that alternative and up-and-coming artists will be given the vital opportunity to gig live.

Among those summoned to the stage are Billy Nomates and the Mercury Prize-nominee Porridge Radio, who have both recently released lauded albums, Brighton’s Girl Ray, a pick and mix of bands, from Manchester’s Porij, Leeds’ post-punk Yard Act, Folly Group, rock boundary-pushers Famous, jazz-fusion Kai Kwasi, Wu-Lu, caroline to NiNE8 Collective. Rapper and Mixmag cover star Flohio will also grace the stage, along with experimental-electro artist Gaika, percussionist Falle Nioke, DJ Grove, Martha Skye Murphy and Keyah/Blu. For one day only, Saturday 7th August is your chance to catch this incredible line-up live.

More is to be announced about further artists soon. Tickets are available here.