After a massive 2021 saw him cash in on the success of his debut album, Jack Harlow makes his return with the confident new tune “Nail Tech”, which coincides neatly with his naming as New Balance’s new brand ambassador.

"Letter To Ur Ex" by Mahalia

Mahalia cuts a more introspective tune in her new single “Letter To Ur Ex”, which delves deep into her past relationships to take the learning and healing from those experiences into the future.

Notion One to Watch for 2022 SEB throws it back to the 80s with a new analogue-influenced song, “f**k it i’m the man”. On the song, SEB says, “After a blowout argument, I ended up having to permanently cut off family members who did nothing but tell me how much of a disappointment I was. In the chorus I’m trying to be exuberant and confident but that’s only to mask the pain I'm feeling in the verses. From talking to people around me, I know I'm definitely not the only one who’s gone through this. I want fans who are living through that, to feel empowered to do them, regardless of what anybody has to say."

"I Love You" by Fontaines D.C.

A seemingly simple long song turns devastatingly inward on Fontaines D.C.’s new tune, “I Love You”, a song crafted from deep anger at the current political climate and historical atrocities in Ireland.

Wallice batters up in her new single “Little League”, another exciting and playful tune from the rising star that shows the huge emotion that can come from the littlest things. On the song, she says, “Little League is about my love of games (board and video) and my competitiveness. I also think people can relate to the fear of not being liked. I can hang out with a single friend for 5 days straight, and still each time they leave I feel like- “oh no, they probably hate me because of something silly like being too competitive during a video game. This song was influenced by "Weird Fishes/ Arpeggi" by Radiohead, a band I grew up listening to."

"House on Fire" by Mimi Webb

Mimi Webb burns down the house with her new tune “House on Fire”, a tongue-in-cheek anthem promising a little bit of vengeance on a former partner.

Nilufer Yanya continues the run-up to her eagerly anticipated new album with a new single, “anotherlife”, which delves headfirst into the complexities of healing.

Stefflon Don follows up a hot streak of collabs with the likes of Adekunle Gold and Miraa May with this energetic new tune, “Like That”.

Fresh from his second outing at the BRIT Awards for Song of the Year, 220 Kid kicks off his 2022 with “Another Life”, an adventurous tune that transports the listener with its infectious beat.

Kojey Radical continues the impressive run to his debut album with the smooth new single “Silk”, a stylish and clever collaboration with Masego.

"The Boat I Row" by Tame Impala

Tame Impala have returned with an album full of B-sides and remixes from their 2020 hit ‘The Slow Rush’, and chief among them is “The Boat I Row”, a melancholic and melodic tune that presages a big comeback year.

"You're Worth It" by MORGAN

Viral TikTok star MORGAN continues to spread her message of positivity in “You’re Worth It”, a vibrant celebration of self-love that strives to be inclusive for all.

"Painkiller" by Call Me Loop

After kicking off the year in energetic style, Call Me Loop shows her range with a tempo switch in “Painkiller”, a piano ballad that strips it all back to focus on the bare essentials of emotional expression. 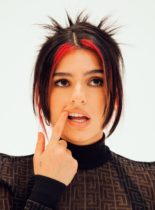