The Personal Healing of Paloma Ford

With millions of streams on both Spotify and YouTube, Paloma Ford is ready to take it even further with her forthcoming EP, ‘X Tapes’, a heartfelt collection of songs detailing love, loss, and empowerment.

Paloma Ford is no newcomer to the music scene; she first gained notoriety as a background singer for the imitable Macy Gray and has been releasing her own music since 2012. She’s collaborated with people of notoriety, including Snoop Dogg, Meek Mill, and Iamsu!, but her newest EP, ‘X Tapes’, is entirely her own, encapsulating the experience of womanhood and heartbreak from her own perspective and voice.

Having been born in L.A. but raised in the Midwest, Ford retained her admiration for the city through her growing interest in music sent to her by her father. This love of Californian culture is clearly heard in her work; the nostalgic sound and influence of 90’s/early 2000’s R&B is clear as day.

“Rain” is the first track to be released off her hotly anticipated ‘X Tapes’. The song is a mellow, seductive number; something you’d expect to hear during a blockbuster movie love scene. “Nights I Cry”, however, is a more sad, regretful take on a failed relationship. But out of all three songs released so far, “Chrome (In My Feelings)” is perhaps the most emotional – a soulful, live recording with powerful lyrics.

Ford says she created ‘X Tapes’ for “personal healing”. The fact that the entire EP was chiefly written by Ford, combined with her distinct creative vision for the accompanying music videos, makes the album even more individualistic.

We got to chat with Ford about the project (dropping August 7th) and its significance, her love of Los Angeles, what her creative process is like and what she hopes people will remember most about the music. 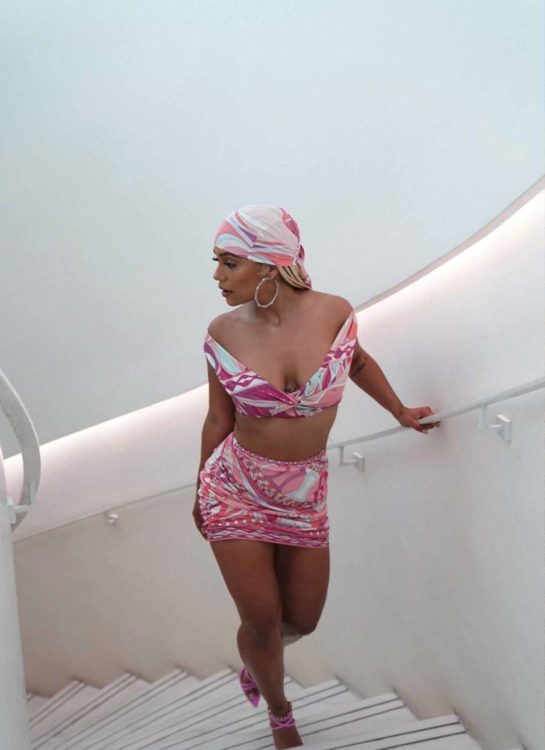 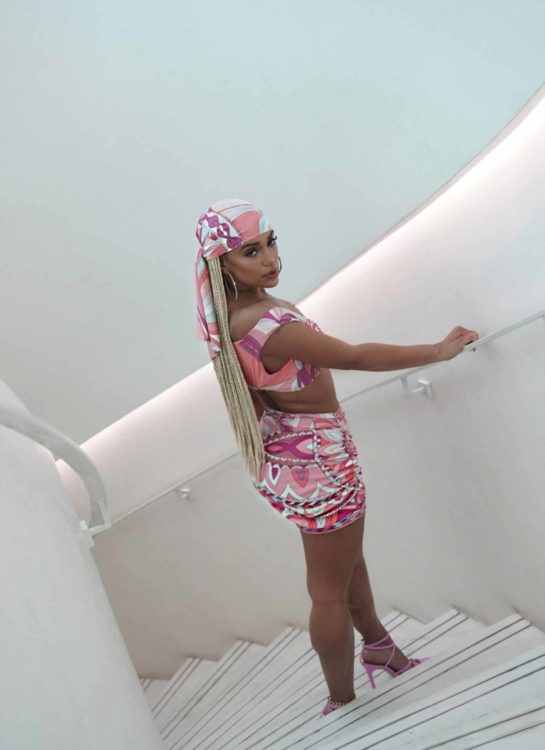 ‘Rain’ is the first track you released from your new EP, ‘X Tapes’. What’s the story behind that song, and why was it the perfect single to introduce the project?

“Rain” was the last song that was added to ‘X Tapes’, funnily enough. After going over the final tracks I noticed that none of the songs made mention of the initial interactions that lead to the heart of X Tapes. Before you can address the loss of love, you have to start at how you got to that point, the beginning. “Rain” gave that perfect introduction.

You’ve described the EP as a narrative that comes full circle, detailing the beginnings of relationships and the heartbreak that so often follows. Why was it important for you to pour those experiences into ‘X Tapes’?

I created ‘X Tapes’ for personal healing. As I was going through said experiences, and channelling my emotions in music, the direction I envisioned for the project came about naturally.

The three tracks you’ve released so far have a very distinct, classic RnB feel to them, and you’ve noted that some of your influences are the greats in these genres; Sade, Aaliyah, Janet Jackson. What about R&B is so nostalgic for you, and why do you think it’s influenced your sound as much as it has?

Growing up on R&B the theme of love was always at the forefront; from the subject matter to the visuals. Being a product of that, I’m a lover and when I write I immediately draw from a world of nostalgic music moments—back when all you saw were depictions of love. It was important for me to drive that message home for this project because that theme is missing from popular music today and it’s very much needed.

Going off of that, “Chrome (In My Feelings)” is such a beautiful, ballad-y song. I think the live recording of it adds something really special, too. What’s the story behind the decision to record that specific song live?

The original version of “Chrome” that I recorded had a business setback that prevented it from being released. That song, specifically the lyrics, meant so much to me so I insisted on salvaging them with a special twist. It’s the “In My Feelings” version and my favorite version now [laughs].

Your identity as a woman and a mother is clearly important to you, and you’ve talked about how you hope your music resonates with other women, too. Why do you think it’s so important for women to hear their stories told through song?

It’s integral for women to hear stories from one another as we build a safe space of community and connection that uplifts and inspires. Music is a universal language and creates the notion that you’re not going through life challenges alone. This is especially important in this very male-dominated world. In the same breath, I write my music for men as well. They need to receive messages from a woman’s perspective in a language that they understand too. 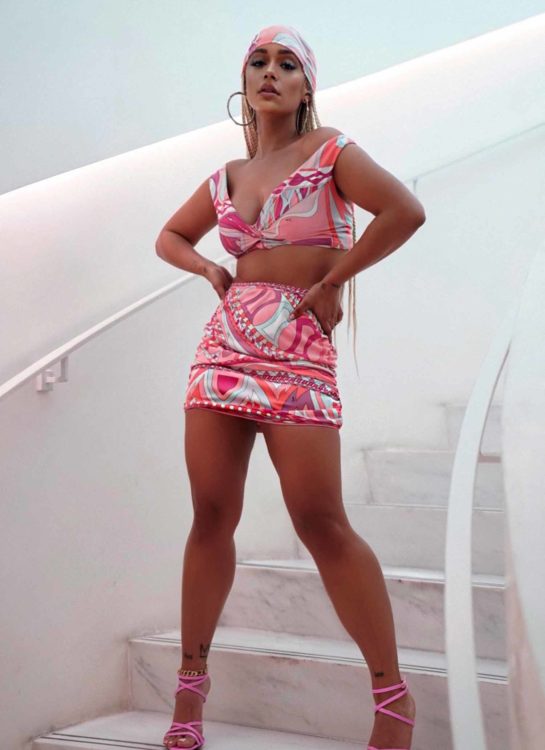 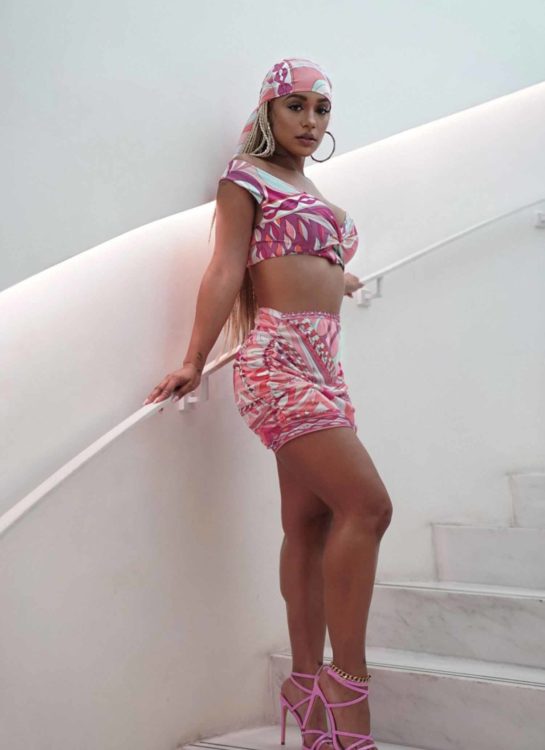 Having roots in Los Angeles, it’s clear that the city’s culture and sound have had a profound influence on you and your work. What’s special about L.A.

What isn’t special about LA [laughs]. This is the city of dreams, the city of angels and being around that energy is bliss.

You’re definitely a private person, and yet ‘X Tapes’ seems to chronicle some very personal topics. Was it scary to pour so much vulnerability into a public record?

Most of this record is written solely by you; why was that important to you, and what is your writing process like?

It was my goal to be as raw and honest as possible on ‘X Tapes’ and no one else could get it to that place besides myself. Usually, my writing process starts with a flick of a lighter [laughs].

All of the music videos for ‘X Tapes’ so far have this really classic, early 2000’s vibe, even down to the style. Did your love of fashion help shape the videos?

Yes, I draw from life and all my experiences when it comes to anything creative that I do. With being an independent artist, you have to be comfortable taking charge and tapping into your creativity. The visual direction has always been an important part of the music for the way it brings the music to life and that’s where I can dabble in fashion based on what I want to express in song. I’ve been able to nail down a formula that works best to execute my style for videos… It’s one of my favorite aspects of shooting overall! My visuals start with a mood board made by myself, depicting how I see the story coming to life, and once I’m clear on the vision that’s when I’d typically have team pull pieces that match the story. The vibe is always consistent with my music and fashion.

What do you want listeners to take away from ‘X Tapes’?

Don’t take anything away. Keep it close and hold it tight to you. Revert to this tape when you feel like you’re alone. ‘X Tapes’ is for all of us and I’m excited to have you all check it out. This is only the beginning. #XTapesOnRepeat.