The Powerhouse That Is Trillary Banks

A real powerhouse, Trillary Banks is blazing her own path and leaving her artistic stamp on the heavily male-dominated UK Rap scene.

Growing up in Leicester, Trillary Banks formed her community, recently uprooting her life to London in order to kick start her career. In 2017, the rising artist broke through the UK market with her Dancehall tune, “Come over Mi Yard”, and has since released two albums.

Artistically, lockdown created an innovative space and had an overall positive impact on Trillary’s musical direction. Bursting with creativity and self-discovery, she released more than 10 singles in 2020, alongside her album, ‘The Dark Horse’. Most recently, you can catch her on Charlie Sloth’s iconic ‘Fire In The Booth’, spitting pure bars over her ‘go-to’ producer Sammy Soso and Maschineman Tim’s beats. A rite of passage for any rapper, over the years we have struggled to see many women showcased on the platform. From the sounds of Steff London to Ms. Banks, Trillary is the most recent female edition to have appeared on a ‘Fire In The Booth’. 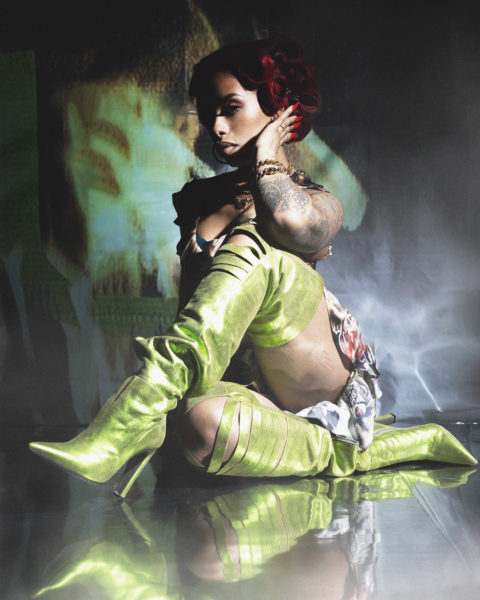 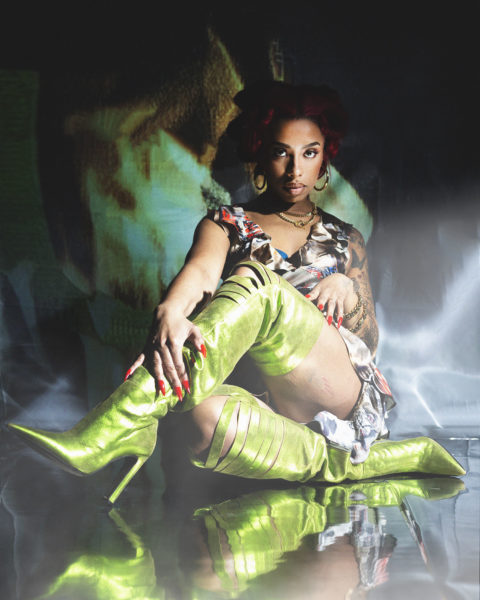 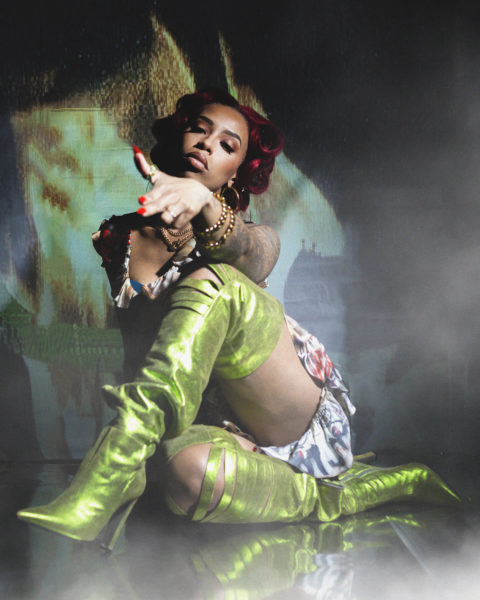 Trillary’s music jumps around from pure rap, with sharp and quip lyrics, to dancehall summer bangers. Needless to say, she is more than comfortable dropping in and out of different genres and mastering them at her own pace. You can detect the muted undertones of her soft Leicester accent, certifying her UK roots and a subtle homage to her hometown. Her faint twang flows smoothly from UK to Jamaican, combining two cultures close to home.

Carving her own path in a male-saturated genre, Trillary shares her thoughts on how support within the industry is crucial to gain success as an artist. She is setting a new standard for the rap game regardless of gender – constantly dropping music, collaborating and receiving platforms on male-dominated spaces. Watch this space. 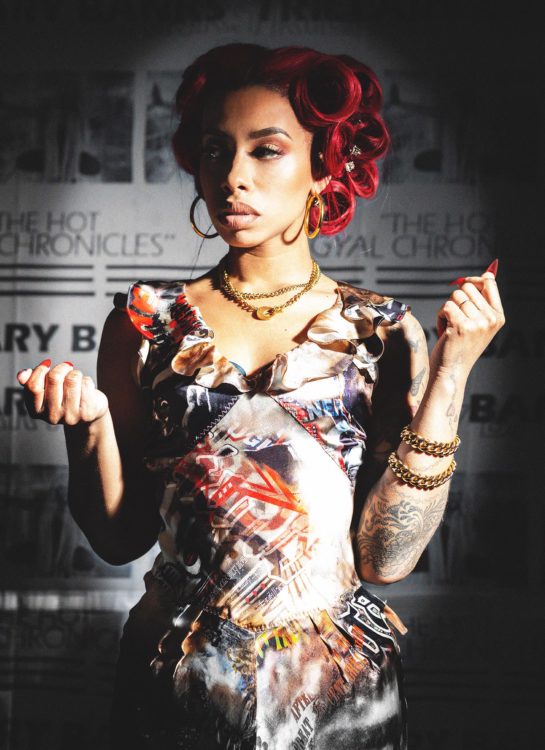 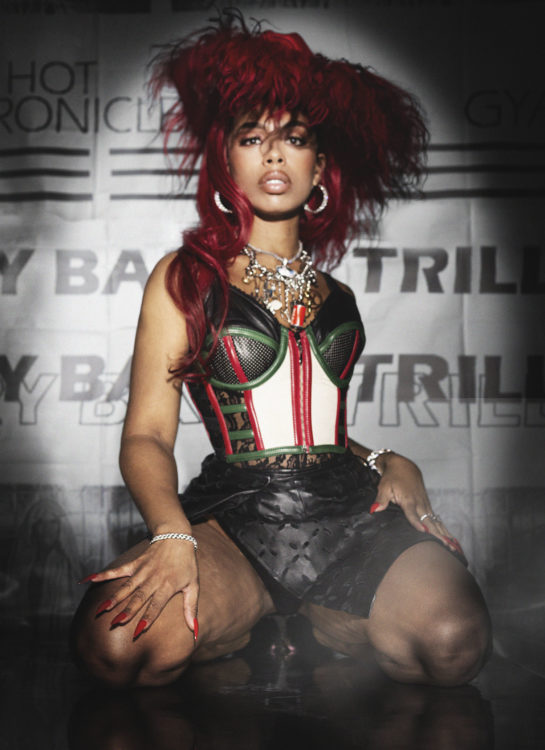 I’ve been writing a lot of music. I’ve been working on a whole new sound with Sammy Soso, a producer and good friend of mine. We’ve been working together for about the last five years – five to seven years, but definitely five. Visually, we’ve been growing, really understanding who I am and where I’m trying to go with the music now, what’s available, and what the game might be lacking. I’ve also been really reflective, spending a lot of time by myself recently, getting in tune with myself on a deeper level, and figuring out life a little bit more as well.

How did your name come about?

Trillary Banks came from a mixture of things – the word Trill, and me kind of relating to a word that I just thought was a good representation of someone who’s down to earth and real, straight to the point, and is trying to keep it real with themselves and the world. Trillary Banks came from Hilary Banks [played by Karyn Parsons in. The Fresh Prince of Bel-Air], which is kind of self-explanatory. Just merging the two to create a character that I feel women need to see in me, and that women need to represent.

Do you think you were able to build up a good enough network in Leicester?

No! Leicester is very small and it’s very slow and it’s just not where it’s at unfortunately, but I have a lot of love for Leicester for other reasons. Overall, I feel like, no, you can’t build the network you need for music in Leicester, hence why I’ve had to take a good few years out to start coming to London and start making things happen for myself. 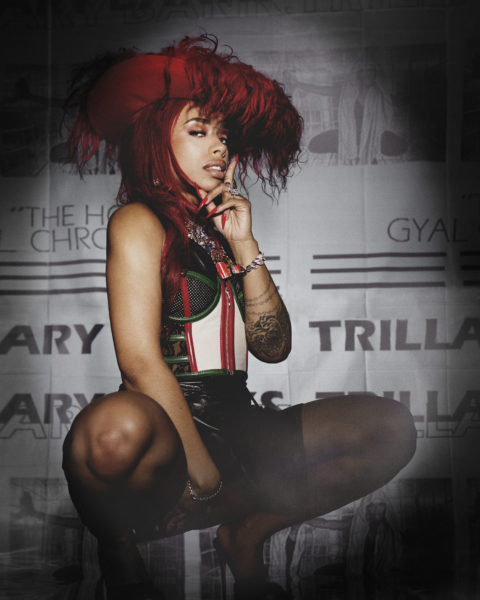 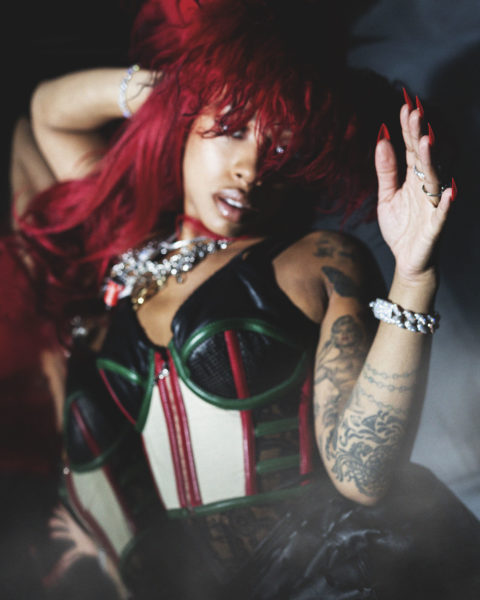 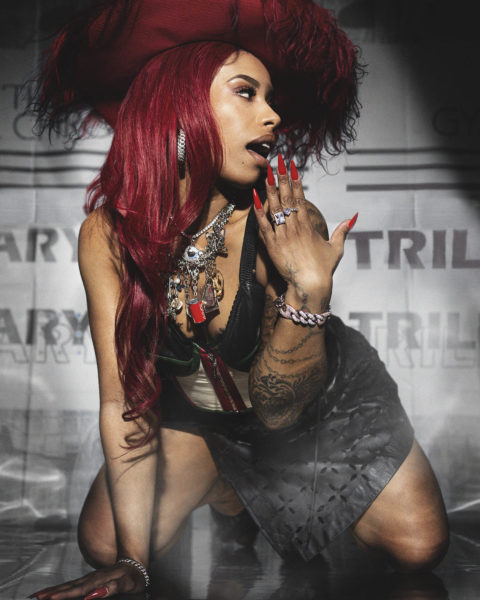 Who do you get your inspirations from?

I don’t know, it’s crazy people ask me that all the time and I probably have a different answer every time because there’s literally not just one inspiration, but it’s a question I get a lot. I would say women in my family. My ancestors, people who are no longer here – but my grandma, my great-grandma, strong women that I’ve seen raise good, strong, successful people. Also my neighbourhood, my area, where I came from, just the people and the things that I’ve seen. Women and men also, everything inspires me in different ways. A lot of rappers who are males, who are females, who are Black or white, there’s so many people who have inspired me. Life inspires loads of different aspects of it. There’s so much more you haven’t heard yet it’s crazy because, you know, Trillary has not really been given a platform to really shine or to really tell her story. We’re building slowly, really trying to feed it so that we could get the people involved who really need to actually make this dream a reality. But I can’t give it all away, so slowly but surely. Every project I do, you’ll get a bit more of an insight as to who I am and get to learn a bit more about my story and then probably understand me more.

You go in and out of a few different genres of music. Are there other genres that you want to explore that you haven’t?

A bit more R&B, with rap influences. I love Ashanti back in the day. I like Jay Z when he has a woman on the vocals, as well as Mariah Carey. I loved when Mariah and Nicki had a song. I like to be the rap queen that I am, and then have an R&B queen come and collab and bring that fire in a heartbreak song, or a women’s ‘let’s go out’ song. I think something like that would be good. I mean I do rap already, I do dancehall already, I do most of them but maybe pop? Why not? 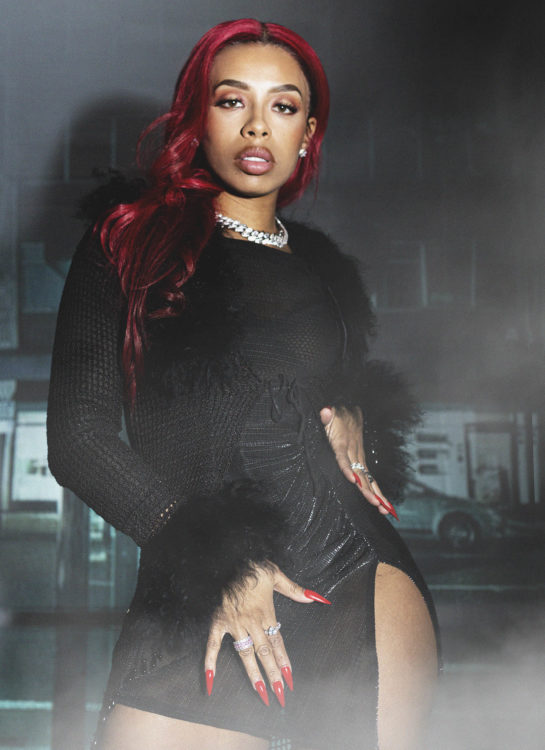 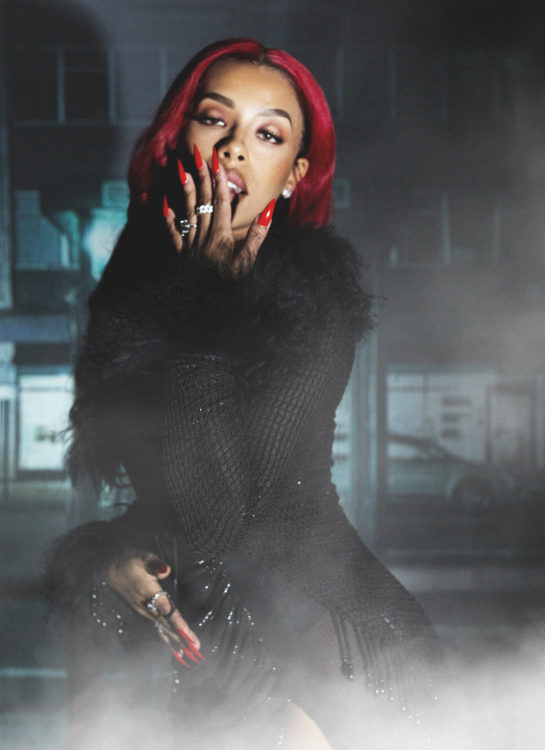 Do you think that you’re going more in a rap direction or more dancehall tunes?

I’m kind of at a crossroad because the fans are screaming for dancehall so I’m definitely going to get some more dancehall over the summer, we’ve got some Afro vibes. I’ve been working with a Nigerian artist called Dami Bliz, so we have a lot of joint songs together. I have a cultural sound coming, which hopefully is appropriate for the Africans and Jamaicans. It’s kind of rare that you would hear a Jamaican and a Nigerian on a song together with a different vibe other than dancehall or just straight Afrobeats. I’m at that point now where I’m ready to start kicking off the rap ting. I’ve got a fire in the booth with Charlie Sloth. I feel like I really killed that and we have a great follow-up song which is very rappy. So yeah, you’re going to actually get into some rap, and some dancehall summer vibes, it could just be either or just have to wait and see I guess.

Is there enough women representation in the UK rap scene?

Definitely not, but slowly but surely. I don’t think there is in any kind of genre, especially when it comes to rap. I think it’s the same in America, even though there’s a lot more women in the industry, there’s probably thousands more male rappers than there are females. I don’t think there is enough representation but whether there will ever be, probably not. It’s not that there’s never going to be equal female rappers and males in the scene, I just don’t think that’s ever going to happen so to me it’s not like, ‘let’s just be equal so there needs to be as many females as men’. I mean, it’s the same on the line-up for festivals. Let’s say for instance, you’re not always going to have the same amount of women as men and the ratio in general, but I feel you can see when it started to get better, and you can see when you’re given the opportunities and support that women need. I feel like [we need] just to be accepted, to be supported and loved. 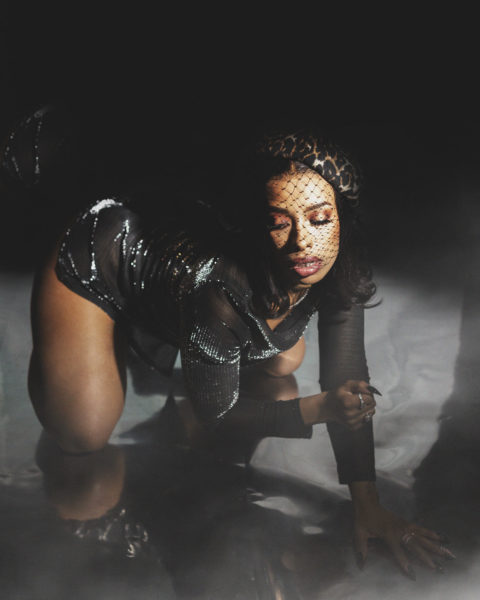 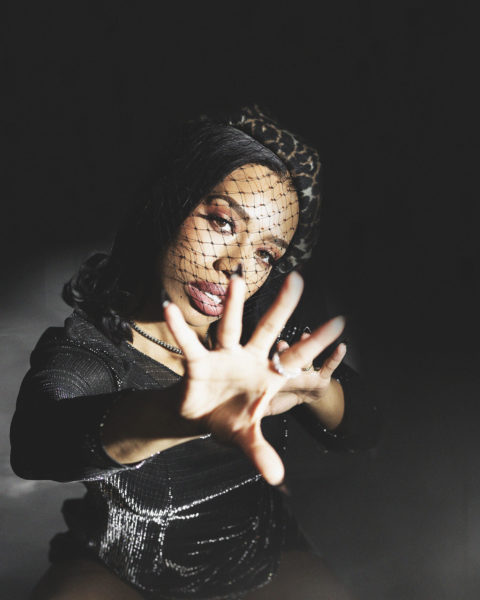 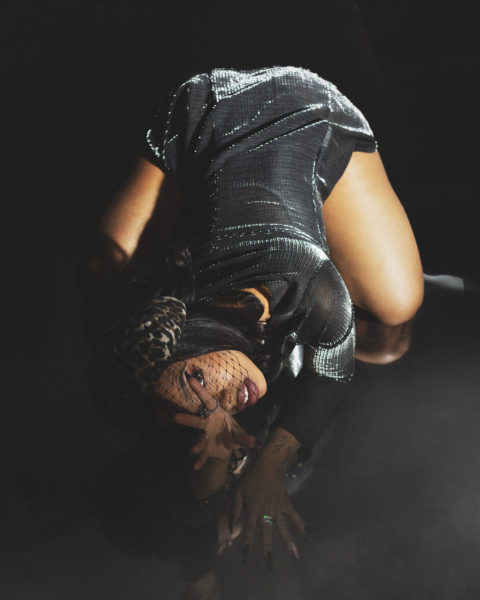 Why do you think UK women rappers struggle to break through America?

I feel that the investors are not there. One of the hardest things about blowing up in America is if you’re not from America and you don’t have any strong links there it doesn’t happen overnight unless you do an American song or sound. We just need more investment, we need more labels who are willing to really get behind this and start pushing us into that market and networking. A lot of majors look after people over there as well, we’ve seen it slightly with the UK guys that have tried that. With the women it’s kind of yet to happen unless it’s like Jorja Smith or Ella Mai or someone who’s really already big. It comes down to artist development so that people who have a lot of potential in different areas can actually be well trained, and then pushed up to the market they want to be successful in. In the UK, as soon as we had our own scene it was amazing, but before that, it was looking up to the US and that music was very American based. There were few people like myself who looked like me or used certain slang that wasn’t British, essentially it all starts over there.

Do you feel like there’s pressure to consistently drop music and do you think it affects the quality of the songs that you produce?

Definitely a pressure to consistently drop music, but it shouldn’t affect the quality of the sound. I don’t release anything that I’m not happy with at the time. Overall to my knowledge as an artist, if you’re gonna put something out, it’s something that you are comfortable with and happy to put out. It’s like when you post on your Instagram, it’s like the best out there for your fans. You might have a moment where you’re showing them something that might not be the best, but overall, I don’t think it’s affected the quality of my work. It’s just gonna make me work a bit harder. It can be quite stressful because when you decide you’re going to drop something you have deadlines, you have to get these mixes, videos edited and if you need to get release dates you have to start giving previews and you know there’s a lot to do, especially as an independent artist but it doesn’t affect our quality. We stay on top in that area.

When can we expect new music?

New music is out real soon, in May. I also have a Fire in the Booth out. My single “Chitty Bang Bang” is coming on the 21st of May. Yeah, we’re gearing up to go. There’s gonna be a lot of music coming from Trillary throughout the summer, so you can definitely expect to hear new hot girls sounds from Trillary. Some more men – men and women collabs. I want to see the men working with the females, whether it be a singer, a poet, a DJ and producer, whatever, let’s start to collaborate more. I feel like men are an important part of our growth as well. Why not support women like you support men? I’m excited to see what happens this year, I’m gonna have some good songs, some gal songs for the girls, even for the men as well. I’m also doing a documentary-type interview with ‘Madeyouthink101’ which should also be coming out in the next couple of weeks. 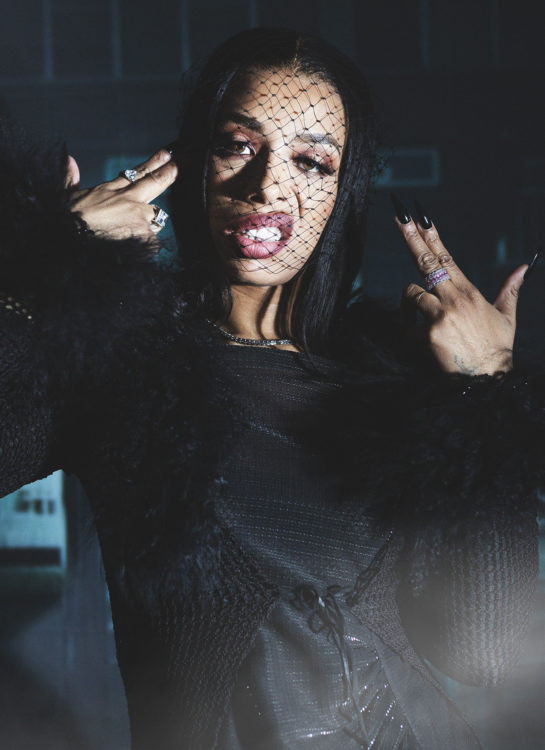 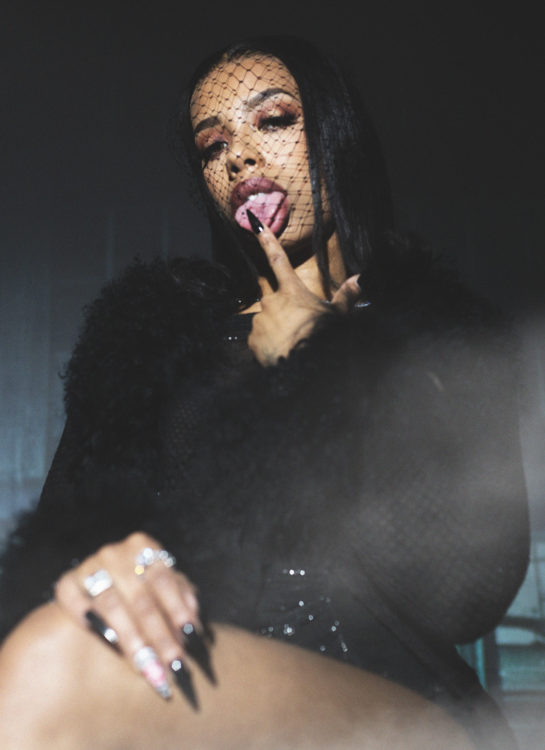