Rated Reads shares our pick of the best articles from around the web. This week: how gay pop stars are paving the way and the Instagram account bringing back Nollywood.

With the world swept off their feet by Lil Nas X’s return, Louis Staples sees him as part of a new wave of queer artists leading the way by centring their sexuality in their music. Staples claims the astounding star is the “most homoerotic man in music right now.”

Listing Olly Alexander, Troye Sivan, Hayley Kiyoko, Janelle Monáe and Cardi B as in the ranks, Staples argues that this is the most fearless generation of queer artists yet, no longer relegating their queer identity to the shadows. “There was a predictable furore in response to Lil Nas X’s Montero (Call Me By Your Name) video and its subversive satanic theme: footage of US pastors branding the rapper a “Satanist” began to circulate the internet and Fox News hosts expressed anger, while conservative commentators called out the young rapper on Twitter. Yet these voices felt very much like an angry minority and the song went straight to number one on the Billboard Hot 100.”

Dazed delves into the Nollywood aesthetics of Insta account Nolly Babes, a platform paying tribute to the female talent of 90s and early 2000s Nigerian cinema.

“A large number of the female characters were considered immoral because they kissed other women, challenged men, smoked and drank, or wore mini skirts. Today, Nolly Babes and similar accounts are reimagining these women, taking their scenes out of the moralistic context of the films, and turning them into iconic feminist personas,” writes Dika Ofoma.

Ofama chats to the account’s two founders about the nostalgic aesthetics of the millennial and Gen-Z generations and how “the Black experience is being revisited and centered.”

Giving a fiddle: The unlikely story of how bluegrass music swept Japan

From North America, bluegrass music crossed oceans and arrived in Japan in the 70s. The country’s music scene hasn’t been quite the same ever since.

Ali Patton chats to some of the genre’s key figures to understand its popularity in Japan. “‘I think people relate to bluegrass because of the diverse influences in it. [Bill Monroe] spent a lot of years putting the elements of bluegrass music together.’ [Raymond] McLain [of the McLain Family Band] credits its no-frills execution as part of the appeal, something that makes it seem both portable and accessible. ‘It’s not something that you have to study for years before you can appreciate it, or that you have to be only in certain circumstances to enjoy.'”

She also speaks to Taro Inoue, son of Bluegrass 45 member Saburo “Sab” Watanabe Inoue. “Most of them are enamoured by the melodies and the spirit of the genre, he adds. ‘None of them are trying to keep the tradition, because that’s not their tradition. They are just lovers of playing music and instruments and techniques… Pretty much everybody is doing it for fun.'”

Rounding up the best of Shanghai Fashion Week, i-D has picked out Sensen Lii, designer of WINDOWSEN, as one of the best. “Sensen has gained everyone’s attention with his fantastical creations, and at the same time the designer is breaking stereotypes around Chinese fashion.”

Qiuzi Zhang and Em Guo chat to the designer about his sophomore show, mental health, and facing discrimination in the fashion industry.

‘You’re not focusing on the eyes’ – are bleached brows the first post-mask trend?

As we emerge out of lockdown and into more regular life, and as masks begin to become less heavily used, it seems eyebrows will also be disappearing. Kim Kardashian, Lizzo, and Maisie Williams are among the high-profile celebrities opting for the trend, bleaching their brows until barely visible.

Dr Dawnn Karen told Priya Elan: “’You’re not focusing on the eyes any more, but on the totality of the person. It makes the person more visible. It’s taking away from the eyes.’”

Having spent much of the past year focusing our attention towards eyes, bleached brows are re-shifting the focus away from our pupils. ‘In past years, the bleached eyebrow look was suggestive of something “other” (think: Katy Perry at the Met Gala, Rooney Mara as The Girl With the Dragon Tattoo). ‘It creates an ethereal, slightly alien look,’ says [Professor Andrew] Groves. But even though it has now gone mainstream, Groves thinks a dark undertow remains. ‘Queen Elizabeth I’s use of Venetian ceruse to make her face and brows as pale as possible was pretty punk rock. After all, it included lead, causing poisoning, hair loss and death if used for a lengthy period,’ he says.

‘[But] beauty isn’t always about perfection; it can also be about embracing imperfection, decay and even our mortality.'”

Rated Reads shares our pick of the best articles from around the web. This week: why Twilight is making a comeback and a groundbreaking documentary, Summer of Soul.

Rated Reads: A British-Iranian Author to Watch and the Dominion of Dua Lipa

Rated Reads shares our pick of the best articles from around the web. This week: the author exploring Muslim guilt around sexuality and how Dua Lipa took over the world. 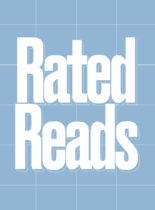 Rated Reads shares our pick of the best articles from around the web. This week: should Love Island be more LGBTQI+ and a menswear collection challenging whiteness.