RAYE Finds Fortitude on the Dancefloor as She Overcomes Heartache

‘Euphoric Sad Songs’ is RAYE’s most candid project to date. And for the 23-year-old, that’s really saying something. “I’m a very open person”, she tells NOTION. “I’m a Scorpio. I’m the kind of person that if I’ve had a little drink in a bar and I bump into you, you’re gonna know half my life story”.

Tracing the seven stages of healing, post-heartbreak, the new EP is almost as revealing. From the gaping wounds of opener “Love Me Again”, ‘Euphoric Sad Songs’ spans break-up texts, another woman, lingering sexual tension, and subsequent nonchalance, before disco closer “Love of Your Life”. “That track is me saying: ‘I’m single now. Where’s my husband? Where’s my boyfriend?’”, she explains.

Driven by four-to-the-floors, RAYE’s fifth EP sees her two-stepping towards the dancefloor. However, a club-classic sample, Dolly Parton nod, plus a stripped-back acoustic number, means it’s replete with musical twists and turns. 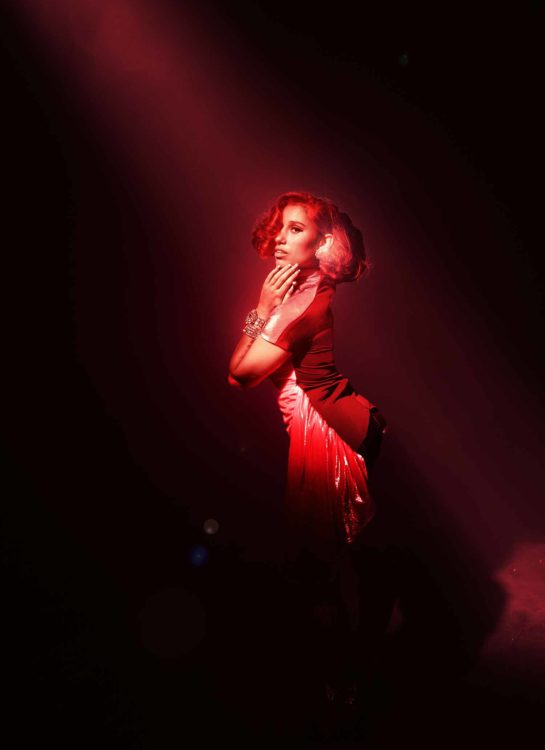 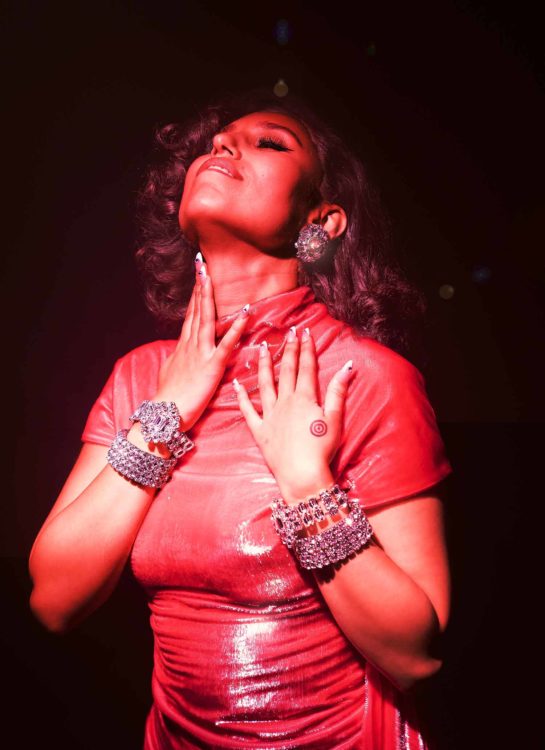 Which isn’t unlike RAYE’s trajectory up to now. Duality in her success means, on the one hand, she’s the revered songwriting savant behind Beyonce, John Legend, and Little Mix cuts, who David Guetta described as “the best writer in the UK” last year. However, the comment sections of her own music videos are lined with protests at how underrated RAYE, the artist, remains.

This may leave some perplexed. After all – thanks in part to her chart storming collaborations like “You Don’t Know Me”, “Decline”, and most recently “Secrets” – she does enjoy an impressive 11 million monthly Spotify listeners. She also just performed alongside Guetta at The MTV European Music Awards. But, seven years after she was signed, a debut album is still yet to come. And, there is a sense that RAYE remains on the cusp of the stratospheric superstardom she’s long deserved.

As she discusses below, industry hurdles – namely, the undervaluing of both vocalists and women in dance music – may offer some explanation. But, as she says, the eventual album “is going to be so nuts because of all the time [it’s taken].” Until then, Euphoric Sad Songs is a resounding graduation into the next frontier. RAYE chats to Notion about its release, gender-equality in dance music, noughties club-classics, and her favourite curry… 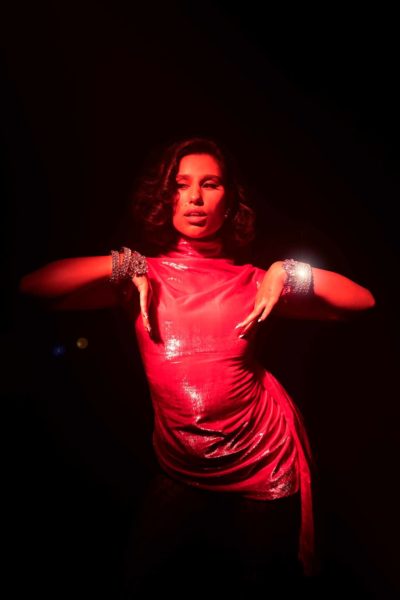 How are you feeling about ‘Euphoric Sad Songs’ going out into the world?

I’m really excited. This project is a unique one in the sense that I started writing it last year on tour with Khalid when I was having my mental breakdown. And, it was almost as if the feelings sort of completely resurged on tour, and I felt so lost without that person. It was crazy. So, I was like ‘Do you know what? I’m gonna write and document my progress through all of this.’  So, I created a project, and it is just so honest, which is why I’m really excited about it. A lot of these songs are like text messages. [Track two], “Change Your Mind” consists of text messages that I sent, and then I was like, ‘I’m actually gonna use this in a song.’ It’s just real, and I’m excited to also help out any fellow heavy hearts on a journey through heartbreak and making it out the other side to “Love of Your Life”.

The project’s framework traces the seven stages of heartbreak, from the break-up itself to looking for love again. Was that something that you knew was going to be the theme from the outset?

It was the beginning of lockdown, so March, and I started to look at the songs I was making, and I was like ‘Oh wow, this is actually my progress, but in audio form, it’s kinda crazy.’ And, my sister and I were sitting together, and we were talking about life, and she was giving me advice, and my sister’s very advanced – she’s fabulous. She’s younger than me, she’s 18, but she was like, ‘RAYE, the seven stages of heartbreak, let me take you through them’. And she did, and I was like ‘Oh my god, I’ve been writing this,’ and we decided to fuse the ideas together.

Speaking of family, you made changes in your team at the start of the year, including employing your Dad as your manager. Is it because you’re now surrounded by people you really trust that you’ve felt able to be so open?

Yeah, I think working with my family has changed things for me so drastically in the best way. Also, we are all musicians, which is absolutely beautiful. My little sister’s just signed a huge publishing deal. She’s just had her first cut for a Target advert in America. My other sister Lauren is my best friend and works with me. She’s also an incredible writer. My Dad’s managing me. The dream is that Mum joins the team, and it’s just a whole family affair. It’s fabulous. It just works. My Dad is also a complete nutcase, he’s like ‘let’s get music out, music out, project, project, project, let’s go’.

In one sense, whilst you’re still young, you do feel like a music industry veteran because of the number of hits you’ve been involved in over several years. However, there are still no plans for a debut album, is that your choice?

You know, it’s not necessarily my choice. I’ve had five or six albums worth of music come and go, which is so sad. But, I’m also a strong believer that everything happens for a reason. And, also, the album is going to be so nuts because of all the time [it’s taken]. Because of the artist I am now, the writer I am now, the graft that I’ve put in to have the skills that I do now. And, I also have an understanding of myself more than ever before. So, I feel great, and an album is coming. My priority now is just music – great, big music.

On the topic of big music, you sample iiO’s noughties club classic “Rapture” in one of the new tracks “Regardless”. Tell me about your relationship with that song?

I have always loved “Rapture”, so much. I remember being a kid in the car, in the Citroen, in this blue family car back in the day, and hearing it on the radio and being like ‘what’s that song Dad?’, and trying to find it on Youtube. And, her tone of voice, I was in love with, which I’ve kind of emulated. So, it was a pure joy for me to be able to sample something that I love. And, I think sampling is a very important part of music. It is something the best artists do over and over again. It plays into nostalgia and brings things back around, which I think music, fashion, culture, and art is doing all the time.

If you could teleport back to the ‘90s or the early ‘00s and take responsibility for any dance anthem, what would it be?

(Starts singing Sonique, “It Feels So Good”). I absolutely love that song. But there are so many songs I wish I created. To be honest, all of everything Dolly Parton did. I’m massively inspired by her at the moment. I’m absolutely in love with the music, the culture, the fashion, the art of perspective. But, also challenging how suppressed women were in this era, and how there were incredible women who really just did the damn thing.

Whilst the pandemic stopped you from performing at festivals over summer, you did produce and perform your own set for Radio 1’s Dance Weekend. That meant a lot to you, right?

You know, it’s something I’m very annoyingly vocal about. But, I have just come up through this dance music scene –  it’s not the artists I work with necessarily – but people decide to just rule out the relevance of the vocal when there’s a producer there. Honestly, I don’t really get it. I don’t get how it is okay for a DJ to take an artist, record them, and then cancel their name out and release it. I’m sorry, to me, that is unethical. And on top of that, when my name is listed as a featured artist, and I’m listening to the radio, and the DJ is like: ‘This is Jax Jones with “You Don’t Know Me”‘ and that’s it. I’m like ‘How fucking dare you.’ I wrote that. I’m singing it. It’s my voice, yet my name is not getting mentioned. It’s so tiring when you’re in that scene, trying to fight to be heard, and I have bloody fought. You’ve just got to fight as a woman three times as hard. And, I believe this is why the Radio 1 set was so special to me because for the first time I was being recognised for my contribution to dance music, which has been a lot.

Your track “Secrets” with Regard gave you your first Top 10 hit this summer, as a lead artist, despite appearing on others in the past. Was that an important moment for you?

I have to throw my hands up to how amazing Regard was about the whole process with “Secrets”. Because this was another instance where I could’ve been completely overlooked. And, I said ‘listen, this is a song I wrote two years ago. It’s been chilling on my Dropbox. It’s an R&B Slow Jam. You’ve made it absolutely incredible, but let me collaborate with you on this. Let’s make my voice the main layer in the verse, and then I’ll let you have it in the chorus.’ It was a compromise. And, he let me put ‘and Raye’ [instead of ‘featuring Raye’], which means the streams are shared. It means it’s our track, it means I’m a lead artist. And, that is the energy, I’m sorry that is the energy. And this is not shade, but this is me talking confidently about what I believe is right.

We have to talk also about your mammoth performance with David Guetta earlier this month, at The MTV EMAs. How was that?

It was hilarious, we did it so many times to get the perfect take. But it was great. There was a huge water machine right next to my head, so I couldn’t even have my normal rollered hair, I had to have my natural curls. And then I had to be in these massive heels, and walk across the floor, which was covered in water, trying not to slip. It was hilarious, but it was really fun, and I love David so much, he’s one of my best friends.

On release day for ‘Euphoric Sad Songs’, how will you be celebrating?

I live with my sister and my cousins and my best friend, so we’ll probably all have a nice little feast. I had Dishoom for the first time yesterday, it blew my mind. Amazing curry – fire. So I think I’m gonna order loads of that and play the project out on loop, and have a nice little two-step in the living room.

The living room is the only place you can go to be fair.

The living room is the place. You know, I know a lot of people who are partying it up in living rooms. It’s crazy! 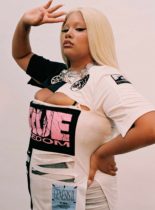 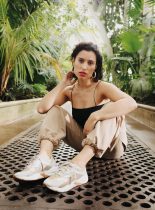