Usually found in a pink tartan suit calling out fuckbois, your sexist customs, and providing the gritty, yet comical social commentary we’ve been lacking since the It’s Not me, It’s You era of Lily Allen.

Follow the sounds of the underground kids, the red-lipped indie crowd, the dissonant youth, to a club beneath the streets where you’ll find said GIRLI thrashing about the crowd in a pink PVC suit and once-white Spice Girls platforms along to the sounds of her PC music. Miraculously defying gender norms while wearing a miniskirt and pink, glittered acrylics, nineteen-year-old GIRLI is laying bare the insecurities, the highs and lows of teenage life and she’s making a fucking ruckus about it. She raps, she sings and, if the lyrics are to be believed, she doesn’t want babies or a man to save her, she’s going to jump your mother in the street and she longs for a relationship with a cute girl she’s going to meet on the internet. The audiences that come to see her are lapping it up, partially because she intrigues them so and partially, in her words, because they share “that level of batshit craziness that means they are ok with me throwing tampons at them and giving them Donald Trump piñatas filled with Haribo to smash up.”

Being on stage or being centre-stage (even harnessing the attention from Ant and Dec live at the BRITS last year), was always on the cards for GIRLI she tells me, one afternoon, shoot wrapped up for Notion. “My parents are actors, and I’ve grown up in a family where it’s just a normal thing to be in front of the camera, or have people watch you perform.” Her off-kilter approach, however, wasn’t always appreciated, and she spent her high school years frustrated and at odds with her identity. “I went to a really judgemental high school where I couldn’t be myself at all,” she explains, “and then I went to music college and became more open but still people were a bit weirded out by the ideas that I had.” It wasn’t until she found some like-minded friends outside of her environment, and discovered “the right label and management team and the right friends who were as weird and wacky as me” that she felt she could express herself. Since then, she’s adopted the moniker GIRLI, “got really into Japanese pop, 90s Spice Girls vibes” and has her sights set on a “pop ambition”.

When GIRLI was 14, she stood as a Young MP for Camden and when she was 15, she made a speech in Parliament about the importance of equal opportunities to work experience. “Watching that,” she says modestly, “it’s a breaking point in my life. I always wanted to change the world, and that has never changed. I always wanted to make people feel something, and change shit, make things better but back then, I thought politics was the way to go which I don’t believe anymore.” Instead, she joined a band and channelled her exasperation of the world into music, inspired by the likes of Tegan and Sara, The Streets and Arctic Monkeys. If you were to seek out the video of her speech (and we insist you do), you’d be convinced a young GIRLI was destined for politics, but looking back, she isn’t so sure. “If I had moved into politics, it would have eaten me up. I think if you look at MPs and people who were once genuinely passionate and wanted to make a difference, [you’ll see] it eats people up, and it envelops you in corruption and secrecy and stuff. I don’t think it’s the way to change things anymore.” 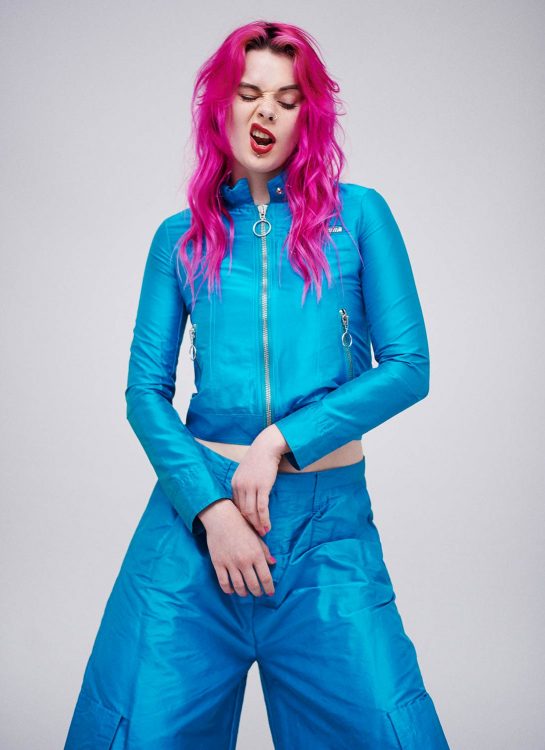 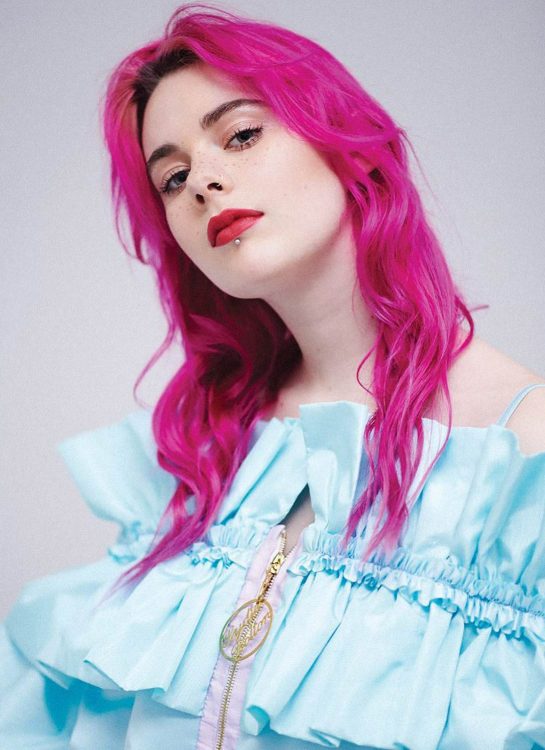 A few years and many hairstyles later, GIRLI’s gone from singing in dives to being signed to PMR and selling out venues. She counts producers Ragz Originale, Z Dot and Henrik the Artist as collaborators, and new indie enthusiasts Oscar, Blaenavon and Black Honey as her squad. She may have swapped the mousey pixie cut for pink bangs and eyebrows, and school photos for photo shoots, but her intentions are clearer than ever.

“I don’t want to be arrogant and say ‘I’m gonna do more things as a musician than you as a politician,’” she explains, eloquently and self-aware. “But, I think art and music and creativity definitely bring more people together than politics, for sure. Particularly through social media and Twitter, music spreads so fast. Music can be a very powerful tool that needs to be used more by people who have influence.”

Followers are drawn to her rebellious sound, her DIY attitude and her “zero fucks given” approach and her resulting steady upswing in popularity should not be dismissed – it’s clear people are seeking a remedy, an alternate voice, to the chaos of our current political state.

Indeed, she’s also the antidote to the Kardashian era, proving it’s ok not to contour or iron your shirt or shave your pits, but she admits, “I’m not always the most confident person in front of the camera. I guess people are surprised about that because I’m very in your face sometimes.” Performing, though, is where she feels most at home; “I feel the most comfortable on stage because that’s when I can totally be myself.” 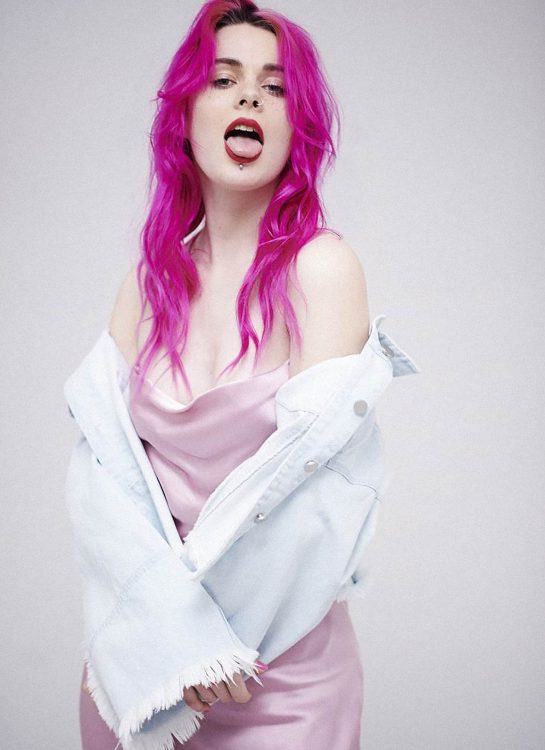 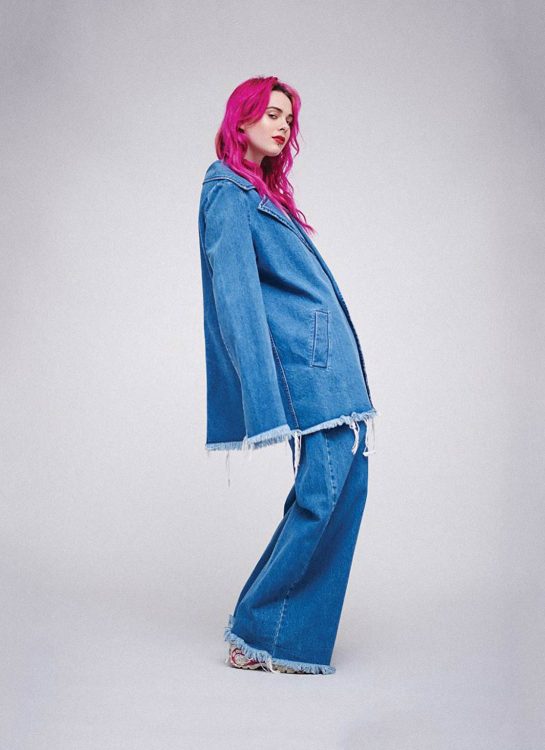 Though she’s an Internet kid through and through, it’s her live shows that help unite the rest of her “fearless” listeners, the ones that thrive in the clamminess of the crowd. “The thing I love about the people I have at my shows and who follow me on social media is that they are not just one type of person, you know,” she explains when asked who makes up the GIRLI fanbase. “There’s boys, girls, gay people, straight people, black, white, all ages and I love that because I never wanted to make something that felt exclusive. I wanted it to be music for everyone. I think the one thing they have in common is they are all super accepting and open people. I definitely see there’s such a supportive environment at all my shows; I want people to come to a gig and feel safe and feel they can express how they feel and not be judged in any way.” Though she may at times seem anarchistic, that same girl who expressed her concern over work experience for all her school friends (even if they were judgmental shit heads), shines through today, providing a leg up to her comrades from the “bloodbath” of school. It’s the same girl whose lyrics to all her songs are listed on her website so fans can sing along.

Those fans anticipating more words to get their teeth into should know that a three-track EP is coming set to showcase her writing capabilities as a pop artist. “I’m making a lot of super angry, punky stuff which isn’t sweet and it isn’t cute, but I’m also making quite romantic, heartbreak-y music as well. It’s my kind of cute side mushing together with this punk side.” There are also more headline shows and festival appearances in the pipeline, as well as adding more souvenirs to the GIRLI merch store. “We’re doing artwork for the singles, and yeah, I definitely want it to tie in all together. Some cool lyrics are going to be printed on t-shirts and stuff. I wanna do unconventional merch, underwear and bras, that would be really cool.”

It’s clear that the world hasn’t heard it all from GIRLI, which is just as well as she has a lot more to say, and she’s going to say it anyway she likes.

GIRLI’s ‘Feel OK EP’ is out tomorrow via PMR.

GIRLI - Girl I Met On The Internet