Gerle is used to the nomadic life. Much of her childhood was spent touring with her mum, observing the changeable landscapes around her and gaining inspiration from it. Music was a way to find identity and stability within this life – becoming a new form of company for her in a life that could often be lonely.

The California-based artist has decided to evoke that story in her compelling new single, “Rest Stop”. The melancholic indie pop tune conjures a rich story of long, quiet hours spent on the road in a variety of liminal spaces, and the search for something concrete to dispel the loneliness that this brings. It’s an impressive statement of intent from Gerle – a sign that she’s unafraid to delve into autobiographical storytelling and revisit her past vulnerabilities with new awareness and insight.

Indeed, Gerle has found the meaning and purpose that she craved on those road days in her new musical career. Praised by numerous radio stations and reaching a coveted spot in the Billboard US Charts, she’s carved out a space for herself that is open to sharing and collaborating. With unapologetic heroes like Robyn, Miley Cyrus and Madonna as her guiding light, there’s no longer any question as to whether Gerle will find herself in her music – she already has.

Listen to the track below:

“Head In A Bottle” by Gerle 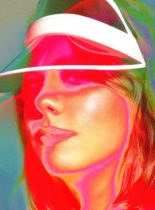 “Head in a Bottle” allows a look into Gerle's soul, telling a tale of forgiveness.