Sampa the Great Is Ready to Challenge Herself All Over Again

Amidst a densely-packed touring schedule, Sampa the Great finds time for a chat. It’s a remarkable feat considering how busy the hip-hop artist is these days: festival after festival, country after country, all whilst in the middle of preparing her sophomore album ‘As Above, So Below’ off the back of her new singles “Lane” and “Never Forget”. For the last couple of years, Sampa the Great (real name Sampa Tembo) has been shaking up the hip-hop scene with her beautiful lyricism, mystic melodies, and hypnotic voice. She’s something of a natural charmer too: speaking warmly, openly, and passionately about all that she does.

Whilst her debut album ‘The Return’ was a runaway success, there’s no doubt the forthcoming ‘As Above, So Below’ will hit even greater heights. With three years to return to her metaphorical “cave”, she tells us, Sampa has had time to nurture her craft and reboot her artistic capabilities. She returned to her home country of Zambia for the writing and recording of the album, which allowed her to really connect to her roots and unearth a much deeper connection with the album than she originally thought possible. When I sit down to meet Sampa, she’s fresh off the back of performing at the seismic Primavera Sound: one of Europe’s largest festivals, which saw an incredible half-a-million people flock to Barcelona this year.

What follows is a sprawling conversation about the album’s overarching messages, how she crafts her visuals, being a Black woman in both Australian and African hip-hop, and much more. 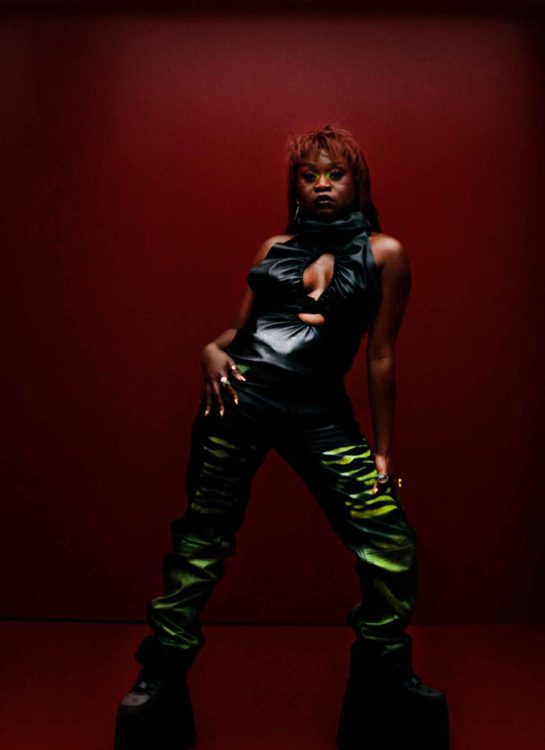 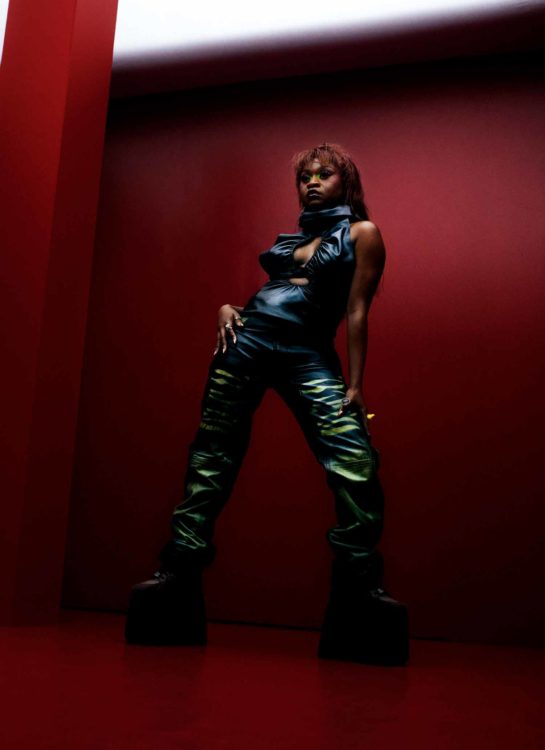 How was Primavera Sound for you? It’s such a massive festival and draws in thousands of people from around the world…

It was beautiful, it was huge. We’re always going into these festivals ready to introduce our music to whoever and not really with the mindset that people know us or our music. And it was beautiful, the audience really connected with the music and our performance. It was a lot of people, like a whole lot of people. They were all listening through my talking points and engaging with my story, it was very beautiful to see. Sometimes at a festival, you don’t really know if people are gonna care enough to stop and listen to the story, but they did. It was just a really really good show.

How do you prepare for massive festival shows like the ones you’re currently doing? Any specific rituals?

For us, we focus on more of the hard-hitting songs we want to bring to the forefront, the ones with the most energy. When it’s just our solo shows we know we can bring it down a bit with songs “Can I Get a Key” and “Black Magic”. We still do those on our festival sets sometimes, but for festivals, we tend to go for the high-energy songs and bigger songs like “Energy” and “Final Form” and so on. Before every show, we always, always encourage each other, because we know how much this means to all of us. We know that touring is not easy in this day and age and we get the opportunity to do it, so we just remind each other of that before we go on stage. Also, we like to have fun! It’s not only about performing for the crowd, but also about performing for each other and enjoying every second of it.

You’re Zambian-Australian, by way of Bostwana, but you have a sizable and dedicated following in the U.K. and Europe. Did you ever expect that, and why do you think that is?

No! [laughs] I was actually very surprised. Just looking back at the four shows we’ve done this side of the world and the reaction from people has shocked me. I don’t know if it’s the separation away from touring for the past three years, but it seems like even more people have connected to the music and that’s exciting, I was really surprised. In our last show in Italy, people were just yelling back the lyrics! And I’m just like….I didn’t expect this, I’m really surprised and really shocked and really happy that the music is reaching this far.

Now I wanna talk about “Lane”, because it’s amazing and I love it and I think everyone else loves it so far too. The vibe I got was that it feels like the beginning of a reintroduction for you, which is interesting anyway because your first album was called ‘The Return’. 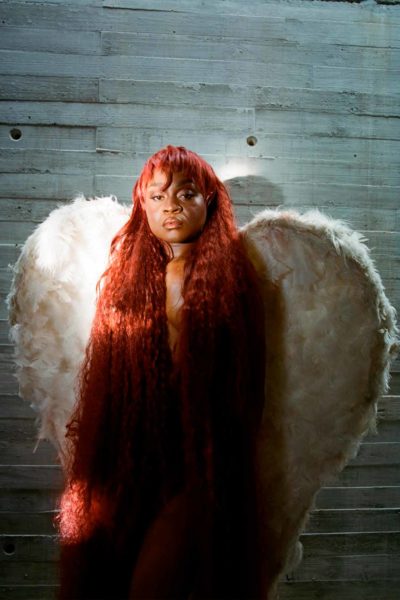 It does sort of feel like your reintroduction to the world in this new era of touring and new music. So why did you choose “Lane” as the leading single of ‘As Above, So Below’?

It stood out as a song that showed a leap, a change of direction, and a growth. Not that the other songs in the album don’t, but “Lane” specifically spoke to me in that way. It shows a very direct difference between Sampa The Great’s last project versus this new direction and this new era. Also, it just solidified the fact that I’m willing to challenge myself to take on new directions versus doing the same old thing again. It’s the perfect way to start off the story of ‘As Above, So Below’ for me. Also, Denzel Curry, who’s on the track, has the same mentality of not doing things in a box, or not feeling like we have to do things one way and always growing and always challenging ourselves.  I want to prepare everyone for what ‘As Above, So Below’ is visually and also musically. I felt like we needed a big bang and a really obvious change and that was “Lane” for me.

You and Denzel have worked together before, right?

I’ve jumped up in one of his live shows and we did a Like a Version together in Australia. We’ve spoken a lot together as hip-hop artists, discovering we have the same frustrations in our journey and we have the same sort of goals and visions as artists. It was so easy to put that in musical form. At this point in time, we’ve both had a huge growth spurt with our music. It was just the perfect song to show a different side of ourselves. Especially through Origin (the spoken word piece), I could show people I’m open to showing all 360 of who I am.

As the album unfolds there is more of that. It’s an exciting time, it’s a really important project for me.

Your visuals are often marked by the elements. Is this intentional, or something that naturally comes to you?

Wow, I’ve not even pointed that out yet in my own interpretation. I have not yet seen that. [laughs] That’s not intentional. With “Lane” we definitely wanted to stay close to water, it’s something within all of us and very natural within the Earth. It felt right with Origin and the character of Eve and just talking about femininity and being able to nurture that part of myself in the way that I want. Water was a very important element to add and it was very intentional. That would be the only one I actually thought of, the other elements were perhaps more subconscious.

I definitely felt a tribute to all the natural elements that surround you. The wind is blowing, the Earth looks rich and strong, colours of red flash up like fire.

That’s really interesting information to take in as a creative, thank you.

So “Lane has Denzel on the track, but now I’m wondering what’s a dream collaboration of yours that you haven’t done yet?

That would be amazing. I see a lot of her influence in your music.

She is my ultimate inspiration. She introduced me to hip-hop; she gave me the confidence to be a woman in hip-hop. 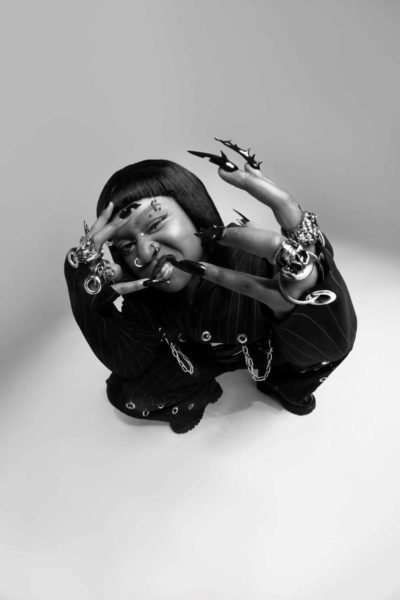 What’s the scene like for women in hip-hop across Australia and Zambia?

In Australia, there are not a lot of us! We’re starting to see a lot of Black and brown artists coming to the forefront in Australia which is amazing, but most of them are men. It’s already hard to be an ethical artist in Australia, let alone a hip-hop artist. The country is only just now starting to understand what a Black musician is, and I don’t think we have yet been able to understand a Black woman in hip-hop expressing herself in different capacities and different ways. Take it from me. We are few, and a dime a dozen.

However, in Zambia we do have a lot of women in hip-hop, but we also have a lot of American influence. America has one sort of version of what a Black woman in hip-hop is, and it really just limits the range of where we can go as Black women in the genre. You see so many ranges and styles when you look at the men of hip-hop, but as soon as the women try to do something different we’re told ‘it’s not marketable’ and all that. Hip-hop is commercialised, so it’s all about what sells. You only get one take of what a woman in hip-hop is and that take isn’t necessarily bad, it’s just not the only thing we’re capable of. It’s really sad because we have so much to offer as Black women, and it’s such a shame you don’t get to see what we get to see.

Do you feel female artists coming out of African countries are still being overlooked?

I think there’s huge attention on Africa right now and African music. I think it’s centred around Afrobeats, which is dope, but also it’s annoying how many countries are on the continent and there’s so much more variation than that. The pros of this focus is that people want to collaborate more with African artists; people want to put more African artists on their platforms. The con is that they just want one genre: Afrobeats. It’s being pushed and commercialised, and that has the potential to close off all the other genres that are in the continent and all the different styles of African music. African music is not just one type of music. Of course, we’re super excited for the attention, but we’re just hoping where it’s originating from is being pushed as well. We want resources given to the people from the continent to continue making this music. I can’t complain too much because it’s amazing that the world is getting to hear more music from Africa.

You’re right, it does feel like it’s getting more attention right now.

It’s only the beginning.

Listen to Sampa the Great below: