Nashville-based musician Samia discusses all things 'Scout', the vulnerability of one, her fast rise in music, and much more.

Breaking into the world of music with her acclaimed debut album ‘The Baby’, Samia was quietly causing a storm with her new offering of indie rock. Now, however, she’s gracing the main stage and embracing the success of her work.

Inspired by the likes of Nirvana and Daniel Johnston, Samia was surrounded by the joys of music from an early age. Whether it was through her parents or spending multiple years at band camp, the rising artist found herself entwined with a love of poetry and singing for her whole life.

Whilst she still stands as a newcomer to the music scene, Samia’s versatility creating tracks splashed with sarcasm to raw, honest feelings alongside the flow of modern, yet old-school soundscapes are picking up tens of millions of streams.

Although 2020 saw the power of her debut ‘The Baby’, Samia leveraged lockdown to reflect on the world around her, funnelling her thoughts into her recent EP, ‘Scout’. Though she shares the nervous feeling of not spending a lot of time with the EP, Samia embraces the risk paying off and admits, “I don’t know what I would do differently – maybe not freak out the world was ending now that we know the world didn’t end, but maybe, that was a good thing.”

Now, Samia finds herself ready to take each day as it comes and continue to do what she loves. 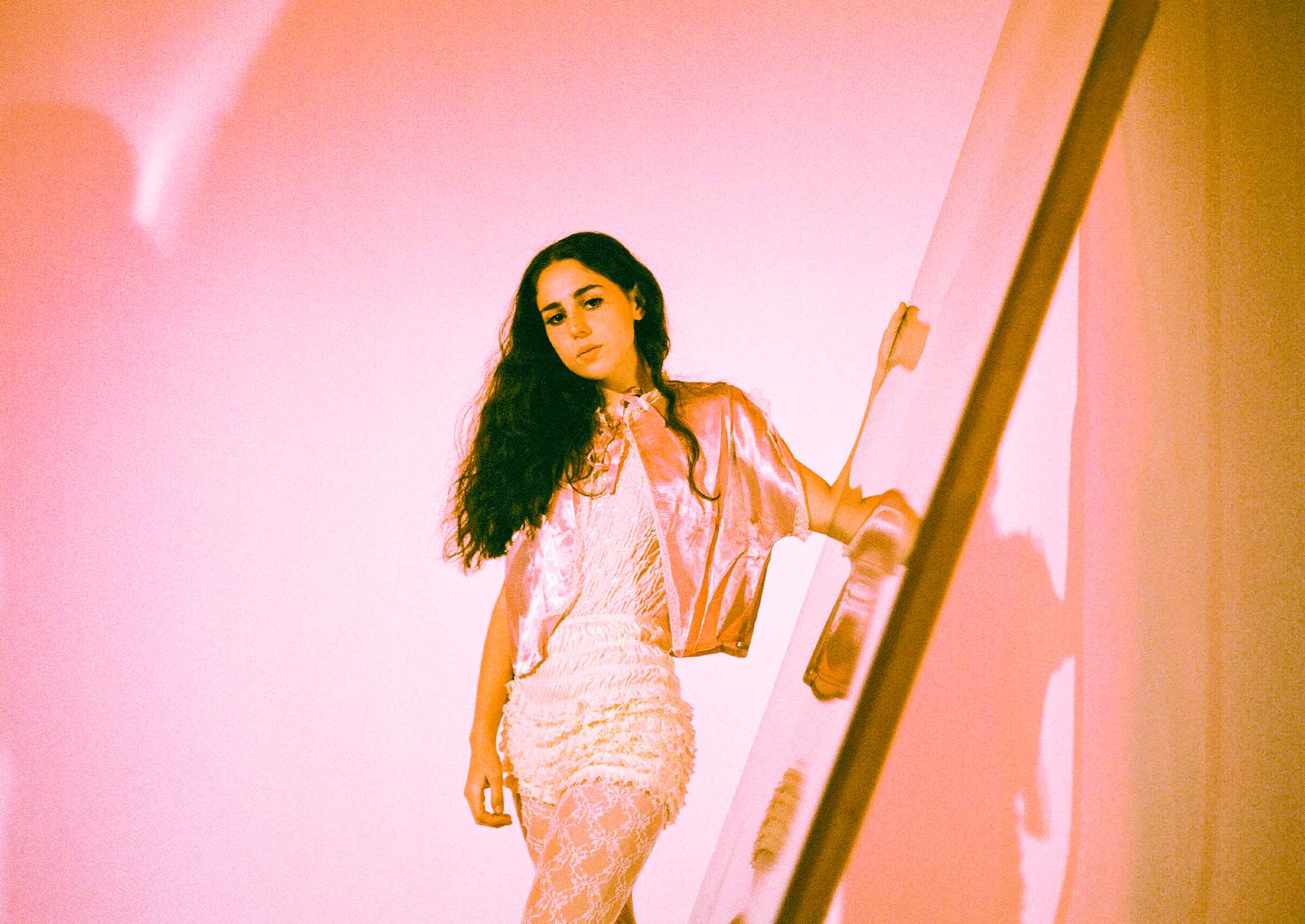 Since your emergence back in 2017, you have slowly won the hearts of many, but how did Samia start?

I have been writing poems and singing my whole life, and I had a great poetry teacher who encouraged me to try everything. And I also went to band camp as a kid, so I grew up on musical theatre. And then, once I started going to band camp, I fell in love with Nirvana, Elliot Smith, and Daniel Johnston and sort of all these confessional vulnerable, intimate songwriters. And I saw a lot of my own inclinations in that. So that was probably the most liberating thing that encouraged me to get into songwriting and, and then I begged everyone to let me be in every band. And I was really, really bad; I had a fake manager that was me, emailing people under a fake name, and then it just started happening from there. But it was a lot of shitty music stuff before it started coming out.

You’ve got millions of streams and one hell of a debut album under your belt. Has music always been the dream? And how would you describe your journey into the music scene?

Music was always sort of like a dream, my parents were in entertainment, and their friends were too, so I grew up around that, and I didn’t interpret a lot of options for me in terms of what I had access to. So that always felt like a natural move. But I think what felt autonomous for me was poetry and writing. And that felt like my thing. And then, when I figured out that I could marry poetry with singing, which was something that I was always doing anyway – I think that’s when it really became the dream. And when I discovered that, like you could be encouraged and celebrated for being strange and having strange thoughts, that was relatable to other people in some way; that sort of changed the trajectory of my hopes as a songwriter. 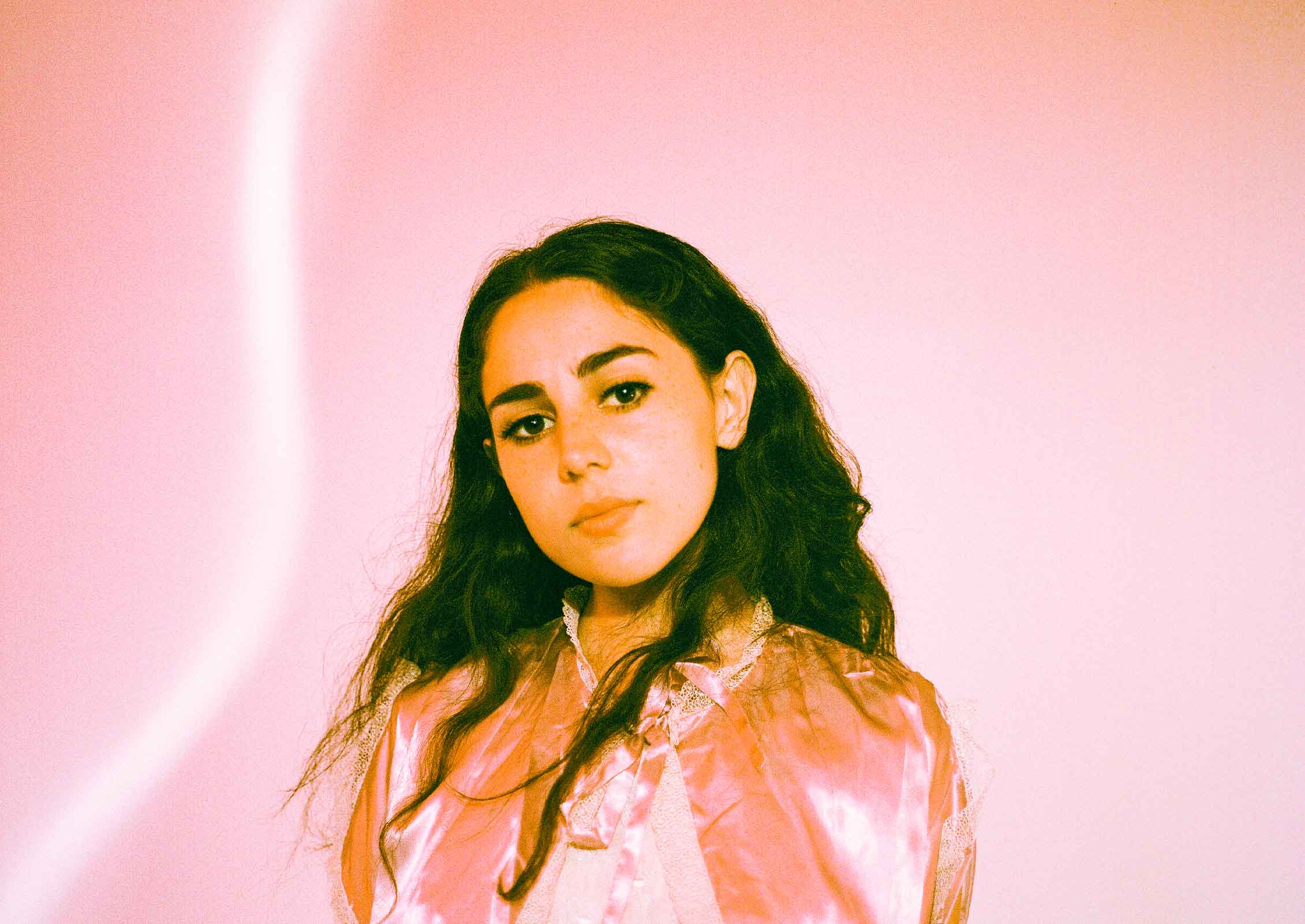 How would you describe the evolution of your sound from the start to now?

The sound is always supporting the songwriting for me. So, it’s about the poem, experience, and the storytelling. And then sonically, you know, whatever it’s lifting that up and helps tell the story in the most meaningful way is what I’ll do. And I mostly attribute my sound to being able to work with people whose musicality I admire. And that stuff doesn’t come naturally to me, so I’ve been able to lean on talented friends for support in those areas.

You’ve recently released your latest EP ‘Scout’ – congratulations, emotions must be running high! What have the past months been like for you ahead of this release, and do you feel relieved it’s out to the world?

This is the least intentional record or thing that I’ve ever put out. My first record was all planned out, and content-wise, I knew what I wanted to say. And I spent three years working up to sing it efficiently. It was all impromptu and the birth of a lack of resources. So, it was a beautiful experience to be able to have to get resourceful and figure things out that way. It was so tumultuous all around us, and everything was so chaotic that I had no choice but to be as honest as possible and not dramatize anything or be theatrical, sarcastic, or self-deprecating as I usually am because it didn’t feel like the time for that. It was a nice new experience that way.

Would you say it is an honest four-track EP of the past year and what you’ve experienced?

Yeah, it is probably the most earnest and sincere thing I’ve ever done. I don’t know if it almost feels too vulnerable. I felt like my whole thing was being vulnerable before, but this is like another level of I’m not really cushioning – I wasn’t cushioning the honest or as much this time, which usually is easier for me to do. It definitely reflected what was going on. 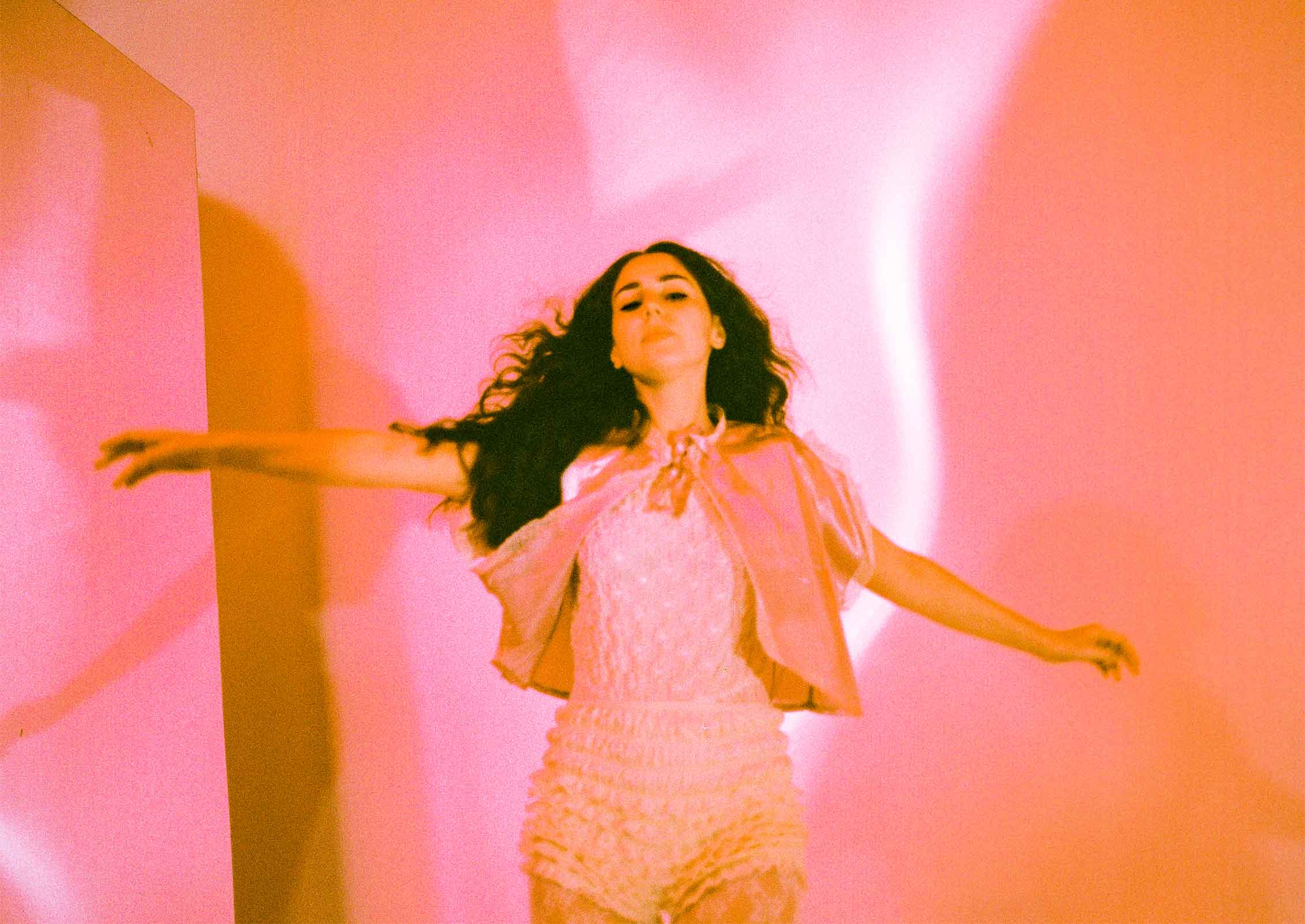 What themes and emotions do you play into and what’s the overall story of the record?

I think it’s just about shifting through relationships and deciding which ones are meaningful to me. I think everybody had to do that last year because we had fewer people to lean on. And no access to peripheral friends or experiences where there were a lot of people around them. So, I called it ‘Scout’ because ‘The Baby’ felt like a whining, crying baby, but this felt like a slightly older sibling to that baby just being like, “Cool down, everything’s fine. Like you will evolve, and you will learn how to speak up for yourself and, you know, organise your feelings in a way that is productive and isn’t just like a big hot mess.”

What was the starting point of the EP, and how would you describe the creative process?

It was sort of the label that I work with, said you have to put an EP out. I was like, well, here are the songs that I’ve written in isolation, and some of them feel worth sharing, and some of them feel like diary entries and having to come to terms with it, but that’s all I had. That was the material that I had to work with. So, it was a leap of faith this time, which was uncomfortable to do, but it was also beautiful for me to take my hands off and send some songs in and be like, this is what I have.

Do you think the risk paid off?

You know, I was nervous about this one. But I think the responses that I’ve gotten from individual people about how it’s resonated with them personally, based on their experience, the past year, made everything worth it to me is getting to hear personal accounts of how maybe someone else was going through the same thing. And that makes anything worth it to me.

Following from your acclaimed debut album ‘The Baby’, would you say there was pressure looming over with this project, and how do you overcome challenges within such a demanding industry?

I don’t think I expected people to respond to ‘The Baby’ the way they did. I had so much gratitude, but also, I didn’t have much time with this EP as I did with the record. So, it was challenging to put that out and take my hands off it and be confident in what I was sharing the way that I was the first time. But I think it felt important to show every side of me, especially for other people who felt particularly vulnerable this past year.

I mean, there’s a lot of pressure and a lot of criticism and new years and new voices that I’m becoming aware of and trying to compartmentalise within my emotional self. But I’m grateful throughout all of that and within all of that are stories about how it’s helping people in some way. As long as that’s happening – I’ll be motivated to keep doing it. 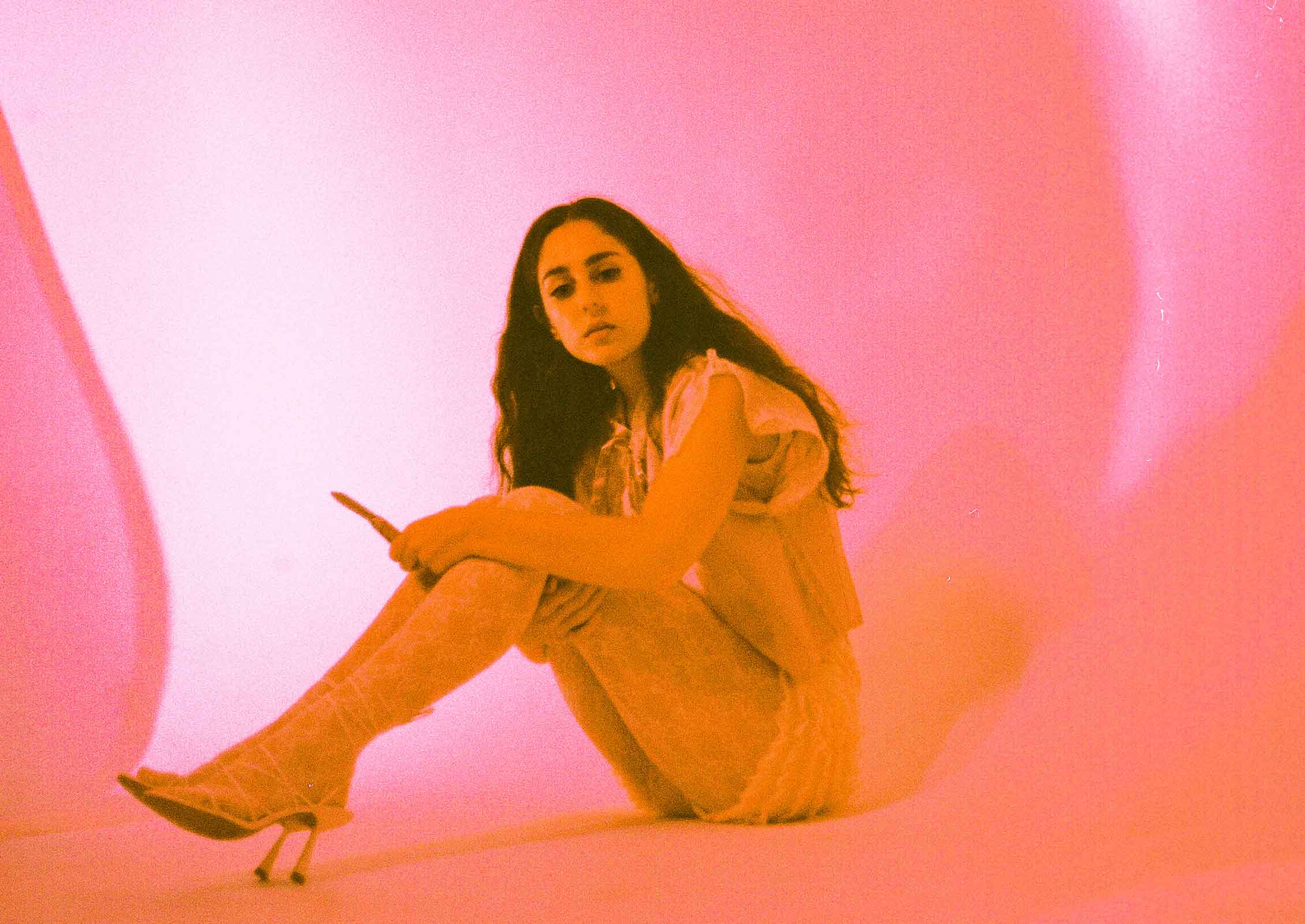 One could say that 2020 was your breakthrough year. What did you learn from such a chaotic year, and if you could go back in time, would you change anything?

I don’t know what I would have changed. I think we were all just experiencing. I mean, obviously, all of that is real-time and never been through anything like that before. So, it was weird to release an album and not be able to tour it immediately. But it did feel so special to have something to share during that time. And something else to focus on other than everything that was happening, and I think it was a struggle for everyone to know how to contribute something meaningfully in those months. And like being able to have intimate conversations with people about that thing helped so much. I don’t know what I would do differently – maybe not freak out the world was ending now that we know, the world didn’t end, but maybe, that was a good thing.

With your name now cemented within the New York music scene, who are your favourite rising artists right now, and who’s your dream collaboration?

Oh my God! Well, my friend Jelani Aryeh, who I did a song with on the EP, is one of my favourite newer artists. And I totally fell in love with all his songs earlier this year, and I’m so grateful that he was willing to work on something with me. So, he’s a big inspiration. And I’m a huge fan of his work and this girl, Jackie Hayes, who’s making a lot of cool new stuff. And who else, there have been Milo out of Minneapolis that I’m loving, my friend Gabe Goodman just put out an amazing EP too. I feel lucky to have friends who I look up to – I think that’s the coolest thing for me.

Finally, are there any secrets up your sleeve before the end of 2021 and what’s the dream for Samia?

I don’t know if I have any secrets. Maybe I should try to make it sound like I do. But I’m starting another album, and I’m going to try and put as much of myself into that as possible. I want to take my time with that. Luckily, it’s also easy for me to write on tour, so hopefully, that’ll be a great creative space. But yeah, I’m not sure after that. I’m sort of taking it day by day.