The English-Cypriot rapper, producer, and entrepreneur A!MS is a force to be reckoned with. Known for afro-swing and trap tracks “Diablo”, “Supreme” and “Run”, the artist has also worked with and produced for the likes of Afro B, The Game, and Cool & Dre.

Lending his talents elsewhere, the multi-platinum artist is also the founder of 3fifty7 Music, his own label. Otherwise known by the name Anthony Melas, for “Trace Yards” – Trace Play’s behind-the-scenes expose of the lives of artists – A!MS revealed that he has a love of cars, with his own well-stocked collection.

Making a comeback, A!MS has recruited Projexx, reggae maestro Julian Marley, AV Allure, and inimitable producers Cool & Dre §x to join him for a new record, “Honor”. The single imagines the clutch of artists battling for honour on London’s streets.

To celebrate the release of “Honor”, A!MS has exclusively shared his pick of tracks, ideal for lounging by the pool.

The Dynasty Tracks by Jay-Z

I know it’s track for track selections but ‘The Dynasty’ album and the unity it represented was one of the most iconic moments in hip hop history in my opinion. I knew this is how I wanted to run my set after I heard the “Roc La Familia” cut through those beats, not just Jay but Bleek, Siegel, the whole gang smashed it - especially from the intro, to "Change the Game", to "I Just Wanna Love You", which was a hustlers anthem, one of the best hustler anthems to this day. But still, the feel good factor in the record is at an all time high! “I’m a Hustler Baaaaby!”

This is a universal feel good record. This song fixes my mood and it has been doing so since as far back as I can remember, through my highs and lows. I love this record so much, that I always include a section of it during my live shows, just to share the feeling I get with the audience that is there… This record is one of my favourites from the Bob Marley legacy, that I'm a huge fan of, and one of the reasons we reached out to Julian who sounds so much like his father and carries that legendary energy. I feel blessed that we captured part of that energy for my new single “HONOR”.

This song just purely reminds me of living my best life in the summer. I mean remember the days when songs would be popular for more than a week? This song was still part of that era. I jammed to this for 2-3 summers in a row. What an incredible record, dope production, and Pharrell is one hell of a musical genius. I really would love to get into the studio with him one day… Amen to that!

"I'll Be There for You" by The Rembrandts

I never spoke on the subject and I don’t really want to go too deep into it, but at a low point in my life I went through a mental health issue, and the “Friends” series was probably one of the few things that helped put a smile on my face. I recently watched the re-union episode and I realized how much the show helped me through it, like it did with so many other people. The song just resonates with me when it comes to good wavy vibes… This is one of the things I love about music: the fact that you can talk to so many people through it, and help them catch a good vibe, and spread that good energy and that’s how I’m feeling at the moment (not to say that all music must always be about feel good, more about authentic emotions I guess…)

What a banger! The way you can hear what he feels when he says “You gonna think about me when I’m gone!” in the hook. I discovered this record when it was on 50,000 views. I knew it was a special one. I started sharing it with my close ones, and I guess I wasn’t the only one! What inspired me in this record, is the freedom of expression that Post Malone carries with him till this day - definitely an artists favourite type of record, I’m sure plenty other artists agree!

"Welcome To Jamrock" by Damian Marley

Big up the Marley fam, they full of legends in that family. This record is so special to me, coz coming from the rap and hip hop hardcore era, seeing how Damian flowed on this one, gave me goose bumps. It was reggae in a gully hip hip form, and to this day one of my all-time favourite records. That opening line, "Murrrrdaaaaaaaaaa!!!!!", captured and defined culture within 10 seconds… Mazza!

Game starring in the "Rise of the Underdog", what an absolute anthem, produced by the iconic Cool & Dre. How could I not include this record in the list that my broskis who helped put my music that’s coming together and co-produced "Honor" laced back in the day for The Game and 50 Cent! I know it feels that I'm rooting for my own in this list but I don’t care - it is what it is. Cool & Dre - that’s fam and this is one of the best rap records in the world forever. The End.

"Party Up" by DMX

R.I.P the great DMX. What an icon, and what a voice of the streets. His passing affected me a lot more than I would have imagined. The whole hip hop world mourned. He has so many anthems, and dope records as well - the Ruff Ryders take over your area vibe, the gritty "Where The Hood At". But yet again, through all that with "Party Up", he gave people worldwide a feel good anthem to go absolutely mental to! The power of music outlives all of us - may he rest in peace!

"Praise The Lord" by A$AP Rocky

Speaking of DMX, this is one of my favourite records, and Skepta was inspired by DMX to create yet another anthem of life. I love it when different regions unite to create more greatness. This is the last record I remember vibing to properly in night clubs as after that I was on Daddy duty, then the pandemic hit, and I had a lot of music to record. So this is probably one of the few pre-Covid records I remember vibing to in the club! Lifestyling and all that! Skepta is a g!

This record kept popping up in so many films and series as the theme song for iconic victories! It is the come-up anthem of anthems, and after hearing it in various soundtracks of movies, I eventually searched it and made it part of my victory playlist. This is what is currently playing in the background as we’re conducting this list, so new name twist, new chapter in the game, more fire waves on the way! HOW YOU LIKE ME NOW? A!MS High!

A!MS: ‘OFFSHORE’ Is My Judgement Era 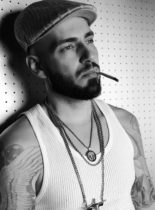 A!MS speaks with Notion about his musical “judgement era”, new album ‘Offshore’, looking up to Bob Marley, and making sacrifices for his craft.