In a world where everything on the radio sounds the same, Madge is a necessity. The LA-based producer and songwriter has been flipping pop music upside down since their debut in 2018, becoming known for their eclectic and enigmatic computerised sound.

Besides their own solo work, Madge was responsible for writing Pussy Riot song’s recent song “Riot”, inspired by the Black Lives Matter protests in the U.S. and the recent arrest of Pussy Riot’s Peter Verzilov. On top of that, Madge holds a residency with the ‘Future Classic x Dropbox’ series; a project that sees them collaborate with other boundary-pushing artists such as Yungblud.

The project responds to societal and personal disorder as Madge states that “for every garbage fire I put out in my brain, I find myself dumping gasoline on another. I find myself wondering if I just accept this state of things”.

To celebrate the release of their innovative EP, we asked Madge to pick 10Trax that inspired it. Dive in below!

"Yes. My own song. This song felt like an anomaly on my first EP and I knew it was a direction I wanted to explore more."

"Yaeji's quiet, gated vocal inspired a lot of my whispery vocal approach on this record."

"I already released a cover of this track but I knew that I could lean way more into punky, grimey guitar like this."

"The melodrama of this anime intro spoke to me. Huge inspo for 'Hey Hi'".

"The dry vocal and straightforward rage says everything."

"Another one from me, sorry. I started messing with demonic chipmunk voice years ago and still need more of it."

"A piece of strange and danceable chaos. Clearly an inspo."

"A corny song that always makes me cry. I love catchy melodrama."

"Running Up That Hill" by Kate Bush

"I don't know why but everytime I hear this song I want to make music. It's not really a direct inspo, more abstract."

"Level Up" by Ciara

"I am a sucker for count-ins and countdowns. Gimme all the numbers." 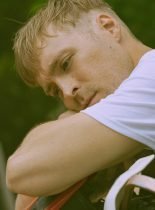